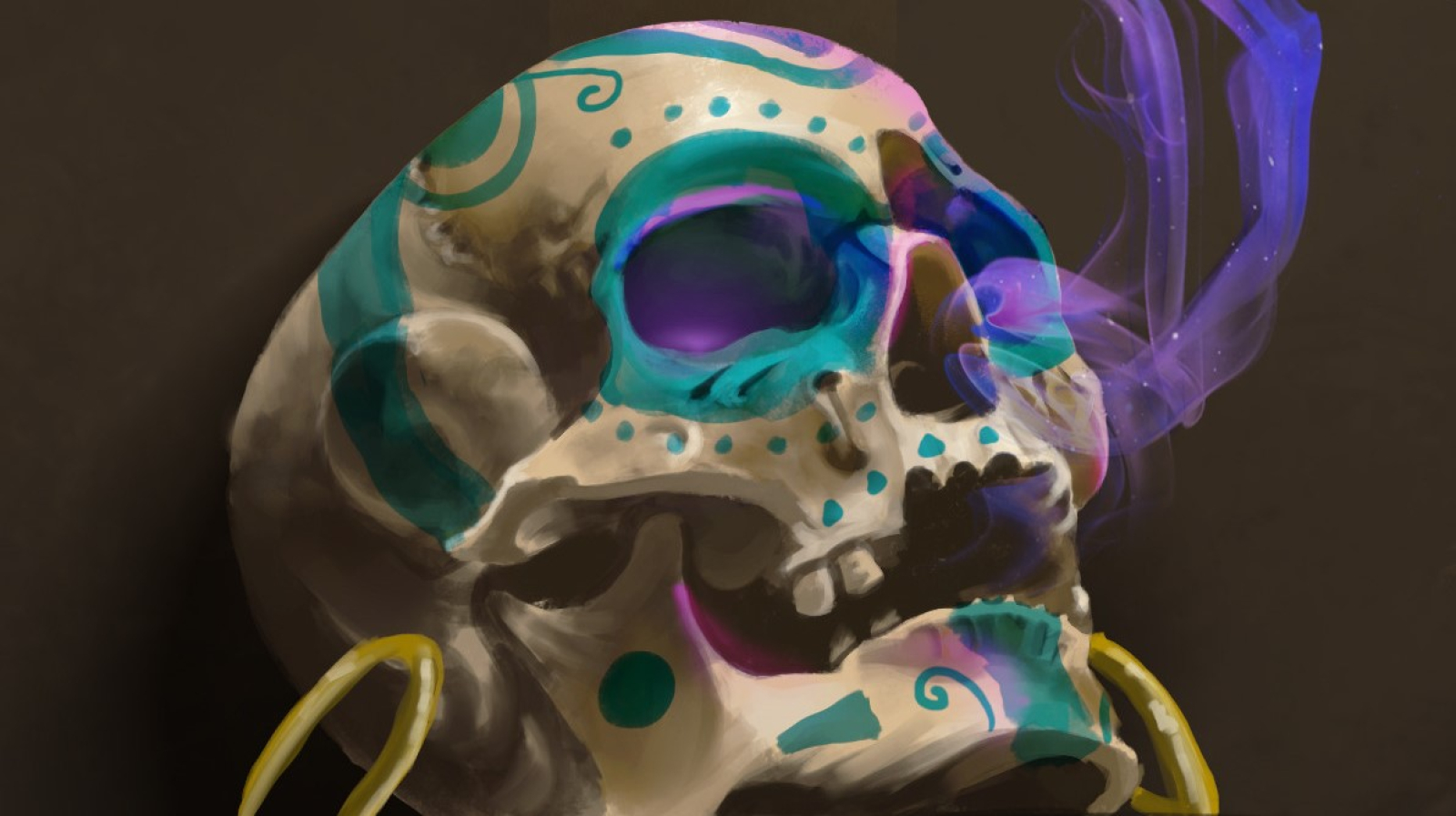 Wearing gold eyeliner is his unique and bizarre fashion choice, exposing flecks of gold in his green eyes.

Condition | Nov 19, 2021
The fairly common sign of the blue devil is blue skin and difficulty breathing which in his later life restricts him to his home.

Tuxmen claims to have the curious ability to hear and taste colour.

Similar pitches share the same colour, while the sounds' timbre slightly changes the shade and intensity attributed to that colour cloud. I noticed voices change with the intent of a person.   For instance, when I still slept on the sands, one of my friend's, whose is normally a bright egg blue, changes to a darker shade when he becomes exceedingly focus and serious.   Another time, while onboard a balloon, I notice one of the rope climbers was beginning to feel uneasy by their change from dark green to a feverish yellow.
— Tuxmen describing his predictive ability

Tuxmen divides his hair at the back into two uniform strands, slicked and laid in opposite directions around the head. The third is twisted at the crown and greased for durability.

A tunic-like shirt draped around the shoulders or tied around their necks and made of woven cotton dyed brown.

Sources of paint and ink including coal, fungi and plants together with turkey quills, sharks' teeth and pelican bones to push pigments into the skin.

The bell ringing on the morning beaches and chirping night creatures sparked annoying flashes of red.

Tuxmen spent much of his youth going between his home clan and the beach communes to watch the vibrant stories voiced by distant visitors and marvel at the cacophony of sound that would light up the sky.

As a low ranked follower on the beach, he was given remedial tasks which included cleaning after his superiors and crafting trinkets to sell for the cult.

Once he left the beach cult, the only conventional recourse was to enlist in the court's border guard where he was a meddling soldier at best. While manning check points, border crossings, and generally patrolling sectors for smugglers, Tuxmen was able to see the colour change in a suspect's speech to determine whenever they lie.

In this role, he served as a rigger onboard a Carrier Balloon for the chance to drift along the cavern cities and over the Cold Swamp. Overtime, his supervisors noticed his unusual condition and its usefulness during negotiations and deal making procedures.   Tuxmen thrived in this environment. He loved for the chance to travel to place he never knew existed. As well as, for the new challenges that his colour vision gave him a distinct advantage over and earning fabulous commissions.

After years of acting as a liaison for the maize merchants, the former traveler constructed a home and settled with some of his relatives in Acadeesi overlooking the pitch lake. The house has a connect workshop where he carves ivory statues and refines small lens of a quantity sufficient for the Citlallo Cuāyōllōtl, for personal devices.

I can ascribe colours to the voices of everyone around me. My own voice creates clouds of purple in the corner of my field of vision.   And I found out the queen breathes turquoise blue when I was crafting her portrait.
— Tuxmen describing the colours of speaking voices

As a teenager and young adult, Tuxmen participated in drugs, played conch songs shared among the groups and venerated old men who prattled on about topics he cared less and less about.   A few of his friends continued onto becoming acolytes while he languished as a ragged vagrant on the beach.

Item | Jan 2, 2021
Jax is a recreational drug that creates kaleidoscopic visions, alien sounds and euphoric feelings while in a comatic stupor.

From his experiences in shaping cheap pieces of clay and wood into works of art, Tuxmen claims to utilize his powers to measure the sounds from a paint stoke on earth or a knife against bark in order to attain a "universal beauty" in his art.

Clouds of fuchsia spontaneously come into existence then disappear with every passing of the knife over bone.

Tuxmen personally believes that, as he "created perfection out of imperfection" in his art, he insists that the same can be true for people as well. By carefully observing colours in the materials he changes into something colourfully uniform. While he knows only he has this ability, he comforts himself in knowing that the fact this colour uniformity exist, then everyone living is capable of attain a similarly higher perfection.

Tuxmen was compelled to leave Conch Cult after wallowing for much of his youth and feeling under appreciated for the mundane jobs that were beneath him.

Language | Oct 5, 2021
For all his far-flung travels, Tuxmen was never able to visit the Folded Blocks that surround Eeat.

He always imagined that the colour the stone would emit when a strong wind hits it would be something transcending for him. But he was never able to because of the timing of his birth.

When he was a child, the Floodlands were flooded with lapping waves. But as an adult, the elder moon moved away and the waves along with it, making travel to the contested area as an older man exceedingly difficult.

He has long possessed a 'do-it-my-way' mindset, which has caused him to act pridefully rebellious at several moments in his life. This later on, graduated into an obsession towards shapes, which for Tuxmen increased his perception of colours.

His workshop is kept very clean, with only he being allowed to enter. He addresses clients, even rich ones, in his foyer or the pitch pier just outside his work area. Many workable materials and tools of his own specifications have their own designated place to be stored.

Touching a cotton blanket creates the sounds of rain

While he was away from his family for decades, they remained in Lesage continuing on the average tribe lifestyle but also receiving portions of his salary.

A passing canoe creates the taste of cherries.

Tuxmen spent most of his time on the beaches, often neglecting his blood relations, during his younger years. But as he got older, he lost his connection to most of his friends, particularly due to the machinations of the cult.

Even as a child, Tuxmen knew how and where on the sandy beaches to find the snail secretions and fungal growths.

Tuxmen is not actually knowledgeable on breeding animals. However, after many visits to Tlopetla's sky coast and observing the rich variety of birds, he gained an artistic appreciation for their mixed plumage.

Tuxmen saved the majority of his earned commissions from his years with Oztomecintli which he now uses in his olden years. 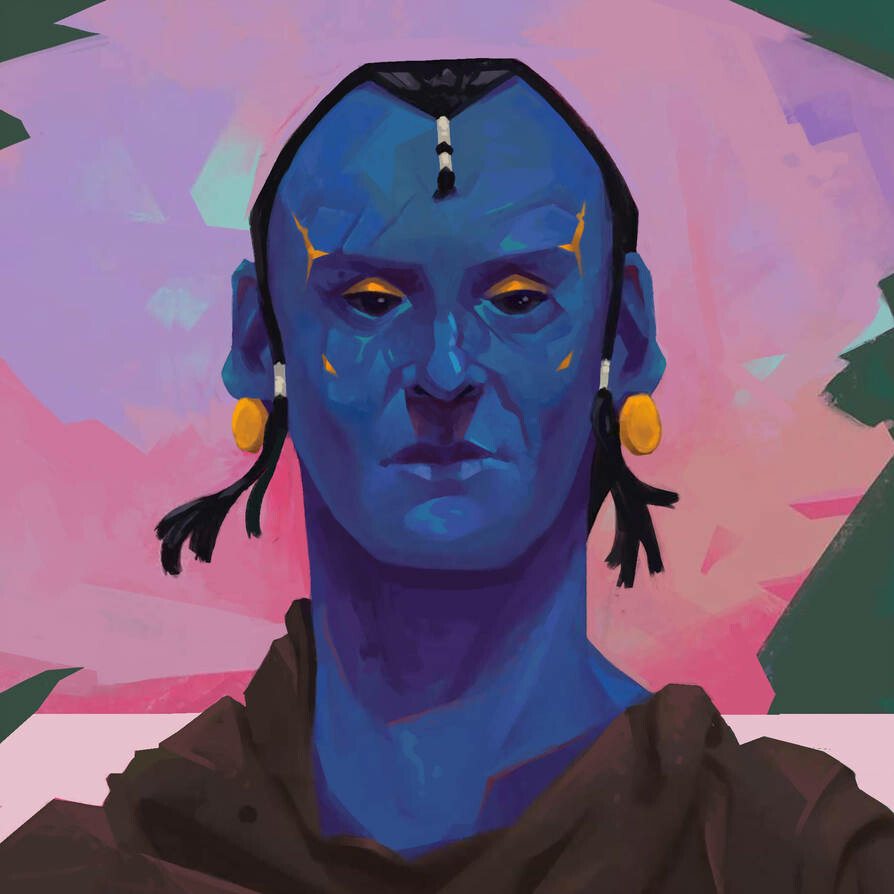 Item | Jul 17, 2020
— Uncarvable in small quantities since it's essentially sugar, but with a large enough piece use a hot knife to melt chucks away

Material | Jul 24, 2021
— Beautiful on its own to look at, when not repeatedly recast in some desert kiln or else it loses it luster

Material | May 15, 2021
— I am not some common weaver women to sew a faddish mongrel into his own death suit

Competition Homepage
In response to the prompt Who is the most famous living artist in your world?