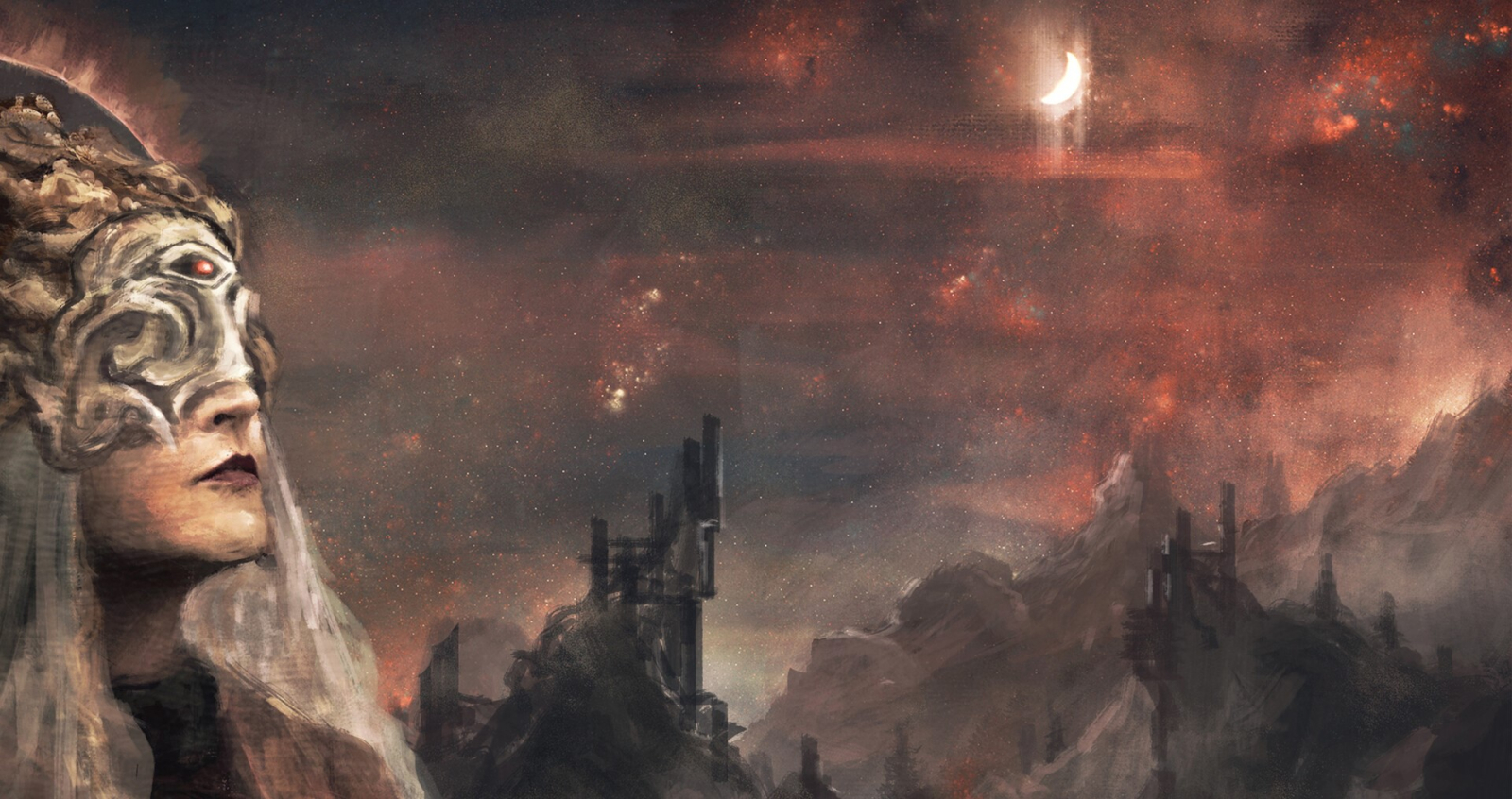 A simple piece of metal engraved with ringed flowers or stars laid over the eyes in a religious homage to ancient Keanian practices. 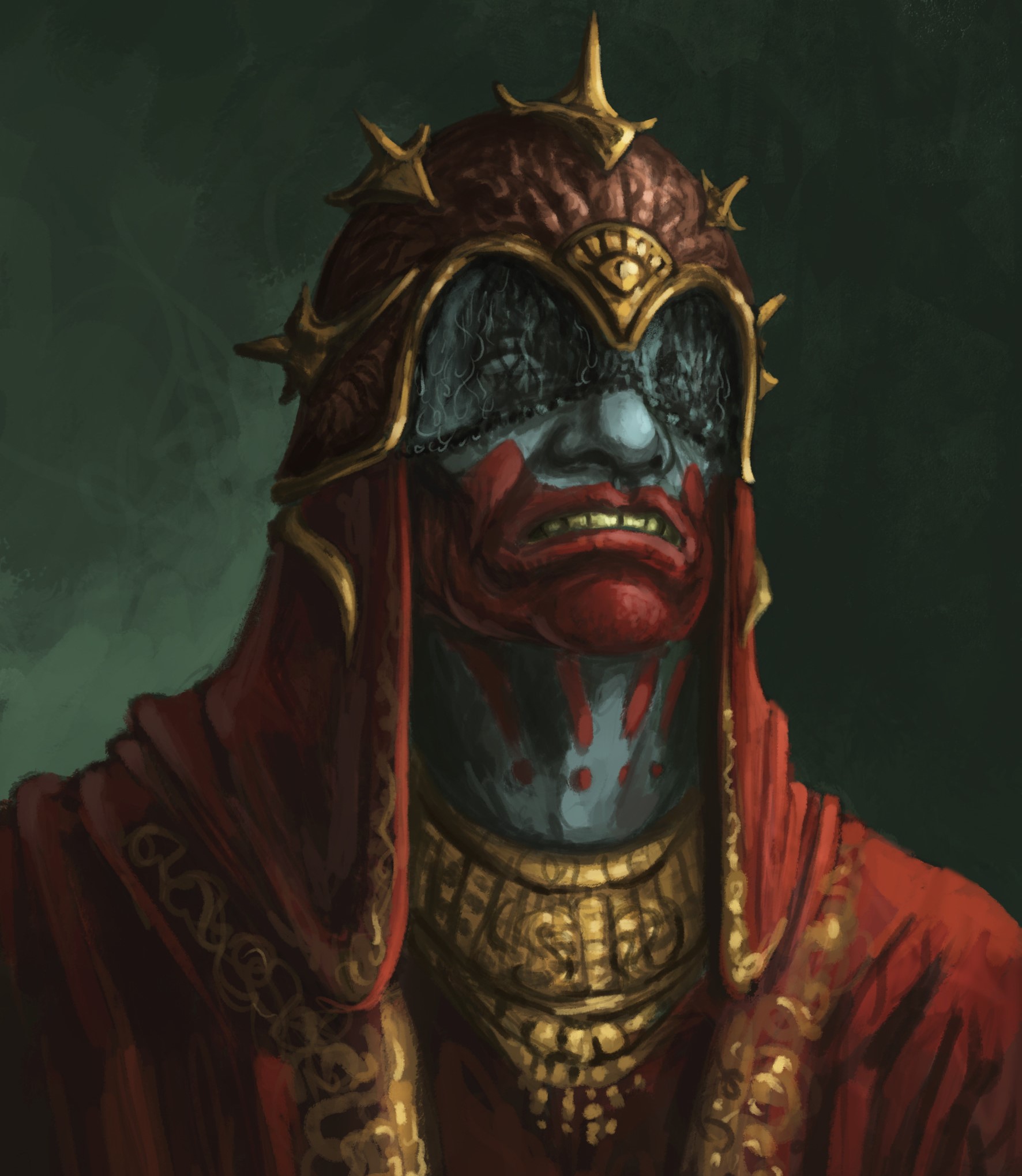 Black Numenor by Nemanja Bubalo
"Keepers of the Gate" are the top of their religious oligarchy. They wear metal caps that connects a simple strip of gold or copper around their eyes and a bedazzled ornamental set of plated keanian horns.   The center of the blinders are purposefully left devoid of engravings as to make it a more pointient sign of dedication to nothing else. Two fossilized horns emerge from the tops of the head and are plated in gold and copper bands that accentuates it in the sunlight. "Shell Speakers" are ranked below the Keepers. They wear metal caps that connect a thin tin mesh around their eyes and short crests spiking from their crown.   The tin veils allow for miniscule dots of sunlight to agitate the wearers and accustom them to keeping their eyes close before they graduate to the blinders and operate fully in darkness. The crests that comb over the crown and over either side of the head are much shorter and clearly not of a hornkin horn.

A knee-length, non-forked skirt with folds in the back that originated from the Keanian's homeland.   Like with the eye plates, these cultists have appropriated the skirt and patterned it with inverted triangles in various shades of red. Red for the ancient race was equated to conquest, rule and blood.   Kilt offer a wide range of comfortable motion for men and women. Fringes often decorate the waistline for formal events and to aid in securing above the navel. Otherwise, a sun washed kilt is wrapped around the body and held by a leather strap and buckle.

A sleeveless protective garment for the upper body, worn by both sexes born into the cult, and that extend to the waist. An adult can easily fit into the same vest they wore as children. Less material appears to go into these vests than with that of other cultures, but they still fit loosely over the bare skin with wide arm holes and ties at the front via yellow fringes.   Earthen pigments colour the wooly vests a boorish red. It is common for well educated members to wear medallions around their necks. Men and women tend to keep the front partly open when these metallic jewelry can rest over the bare chest.

There is strength, power and supremacy in the symbolism of Kin horns. Fossilized horns mark vigorous virility and aggressive glory, but they are not always preserved in a presentable way. Tribal artists touch up raw horns with polish, heat, glue and surface dyes.

Mist metallurgy evolved various smelting techniques and ores to produce malleable and ductile metal useful for tools and adornments. One of the easiest and most preferred method by forgers involves mixing false water and dissolving unrefined ores. They readily melt into purified pool that are precision pressed into complex or intricate parts and patterns.

Eeat's walls call to light the many magics in-which the Keanians evidently were very proficient. Wherever there is an ancient Kean performing songs, chants, spells, namings, signs or sympathy; they are depicted with long horns wrapped in luminous bindings or ribbons of various intensity. It is thought that those whose horns glow in their entirety are the undisputed masters of their art.
— description of eeat writing by a yatei scholar

The foggy clan so venerate their long departed gods, that their entire existence revolves around recreating much of their way of life as is possible; the most well knowing being an attempted recreation of their language: Eeatian.   They go further in adopting their style of dress and pilfer old graves for their horns. Which are often the most valuable things they own in life. However, in their zealotry, they are often blamed by other cults and interested powers for despoiling parts of Eeat. Some cultist exasperate Eeat's condition further by participating in black market deals or contracting outside thieves who carelessly loot Keanian bodies for their horns to sell.

Cultist postulate that it was initially a piece of training equipment meant to improve their caster's special brand of spells by depriving them of a major sense. Cultists, inturn, adopt it as a religious piece to be worn at all times by the higher ups as a designator of their devotions.   Children, from their times at play to their teenaged years, are taught every scriptural lessons while blindfolded in the morning. This to get them long accustomed to hearing and navigating the world with their "extra acquired powers" before adulthood. Their blinders switch from cloth to metal as a sign of mental maturity and to reflect the hard grip that their past had brought onto them.

A scatterings of hills in-between Ñuñu and Yates where cultists populate isolated but well known pockets.

A badge of military excellence on the field of battle. The horns, as used by elkin warriors, are often forgeries from other creatures due to the greater distance from the genuine source.   Regardless, they are still representative of Keanian horns taken from that ancient enemy.


The same holds true for the foggy clans in the Foggy Hills and the cloud clans of Cloud Country. Though for the clans, it is to bring them closer to their deities.
— explaining the significance of wearing a genuine set of Keanian horns

Remove these ads. Join the Worldbuilders Guild
Memories
In response to the prompt Write about a clothing item worn by an organization with bad reputation. What's its purpose and what does it represent?