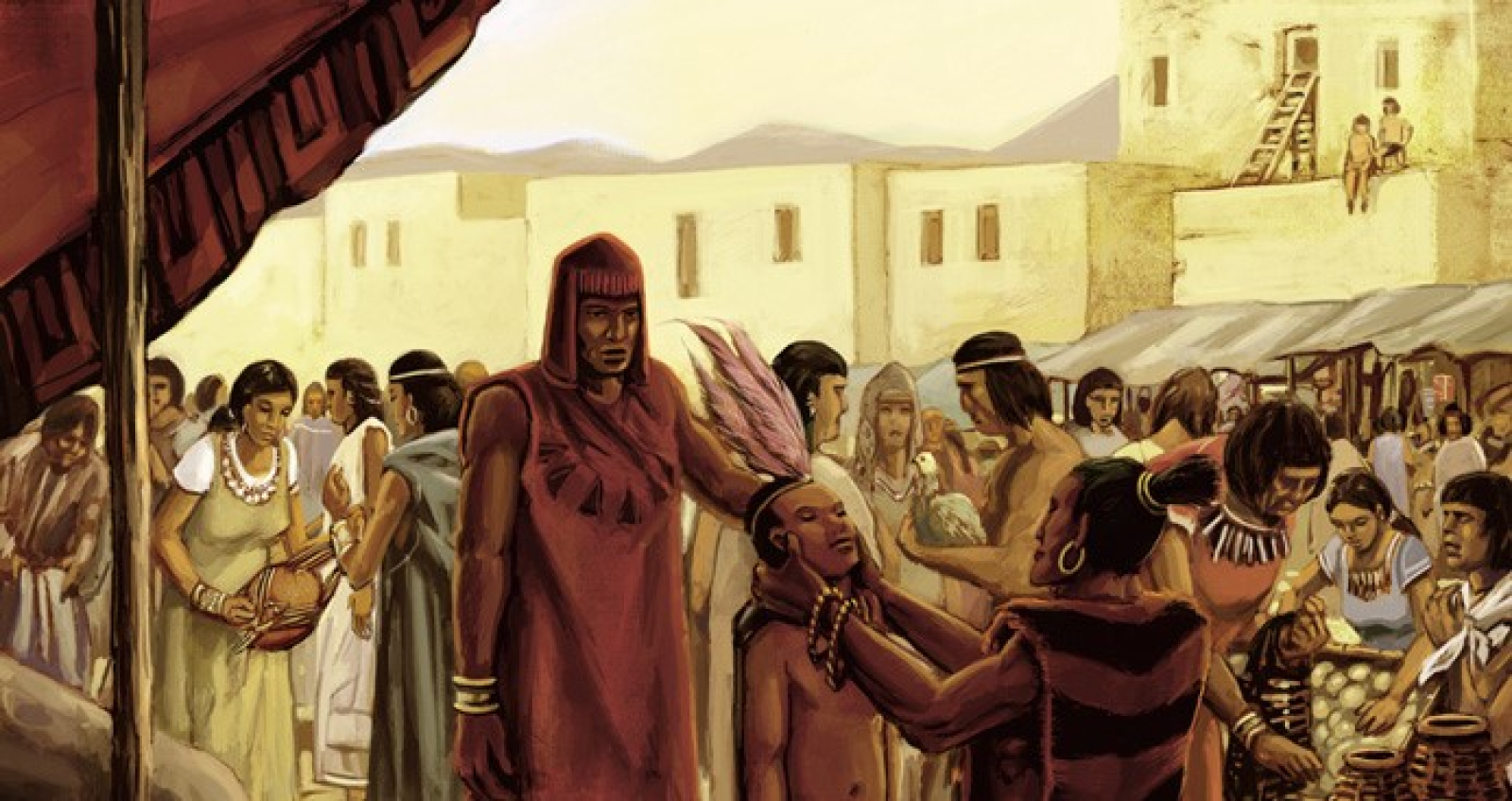 A priest’s ceremonial garment comprising of a short sleeveless jackets with ties in front and cotton fringes.

The religious bureaucracy exhibits great exclusivity towards these religious garments. Most xicollin, are destroyed after they have served their ritual purpose.   While they are made of expensive, tightly woven and high quality cotton sheets, their design is nothing outside the skill sets of a common weaver. With the exception of some tiny roughspun mimicry for children, no other citizen can wear these vests.

Their existence is largely temporary. Because their material is so valuable, xicollin are replaced before they fully deteriorate so that the quachtli can be cut into smaller sheets to resell and recoup the vest's cost.
— Snake Woman observing the Red Temple from the Sacred Precinct

This is a simple weaving technique where the weft thread moves alternately through each warp thread in its path on its horizontal course, then its direction is reversed where the weft moves alternately through the previous set of threads.   Warp and weft are popular to interlace different materials for different textures and appearances. Featherworkers, in particular like to glue, crimp and sew feathers with cotton to make these textiles and use colour dyes to paint the various geometrical styles as needed after they are woven.

These are many specially made garments restricted to ritual use and almost invariably associated with deities and their priests.

(ar-yai-c-colly)
These are blue see-through garments with pintail feathers linked to agrarian deities such as Tlaloc and Cinteotl. It is the costume to which many great speakers and royal rulers who died are dressed, as part of a funeral ceremony to link them to the supernatural.   In addition to traditional snake ear-ornaments; the wearer also wears a wide collar, plaited like a mat with green studded gems, and a large gold disk encircling their breast. These jackets are called a variety of names relating to water:

(kal-caw-u-tal)
A thin netted cape made of twisted thread and knotted like a net with small inlaid snail shells. This particular design is worn by chief warriors for ritualistic occasions. However, the capes' shells for rulers and members of the Shorn Ones, are swapped for golden shells and fruit respectively.

(shu-shu-kee)
A green blue sleeveless jacket worn by speaker electees during public appearances. When the future ruler is appointed, he is undressed at the great temple and adorned with a turquoise diadem, a tobacco gourd, blue-green cotton incense bag decorated with more motifs of bones, an incense ladle painted with skulls, and foam sandals with green toes.

(neh-kaa-wahl-kwa-oot-ly)
A blue-green fasting cape that ties at the front and decorated with a bone motif. It also veils the head to transform the electee into a sacred bundle of the patrons of Sangsalgu's rain gods. He would wear these clothes for four days while fasting, burning incense and carrying out self-sacrifice, symbolizing his own death and rebirth as if they were a substitute chalcaayatl for his mortuary bundle.

(clic-tic)
A black sleeveless jacket most commonly seen during human sacrifices or bloodletting. They are worn by the lines of priests responsible for the killings and lords parading with incarnates during their public prances.   Knife wielding priest distinguish themselves by carrying bags of copal incense around their waists and special back pouches on their chest decorated with folded paper. Speakers wear a double-heron headed headpiece pinned by an ahuitzotl bone and publicly carry tobacco gourds, paper devices, and implements for drawing their own blood.

(om-i-clo)
A ritual cape decorated with bone motifs and worn during sacrificial rites by the main priest in charge of the ceremonial bathings.

(teo-xe-c-colly)
A divine jacket with feather borders, made in different colors and patterned with human skulls and bones to affiliate the wearer with death. It is found only in the apparel of the city's rulers and acts as the signifier in sang picture writing of the speakers doing priestly things.

The name coyotlinaual, the God of costumes craft, means “he who is disguised as a wolf". Craftsmen would worship and prey to him whenever an artist is to make exquisite feather mosaics for a royal patron. 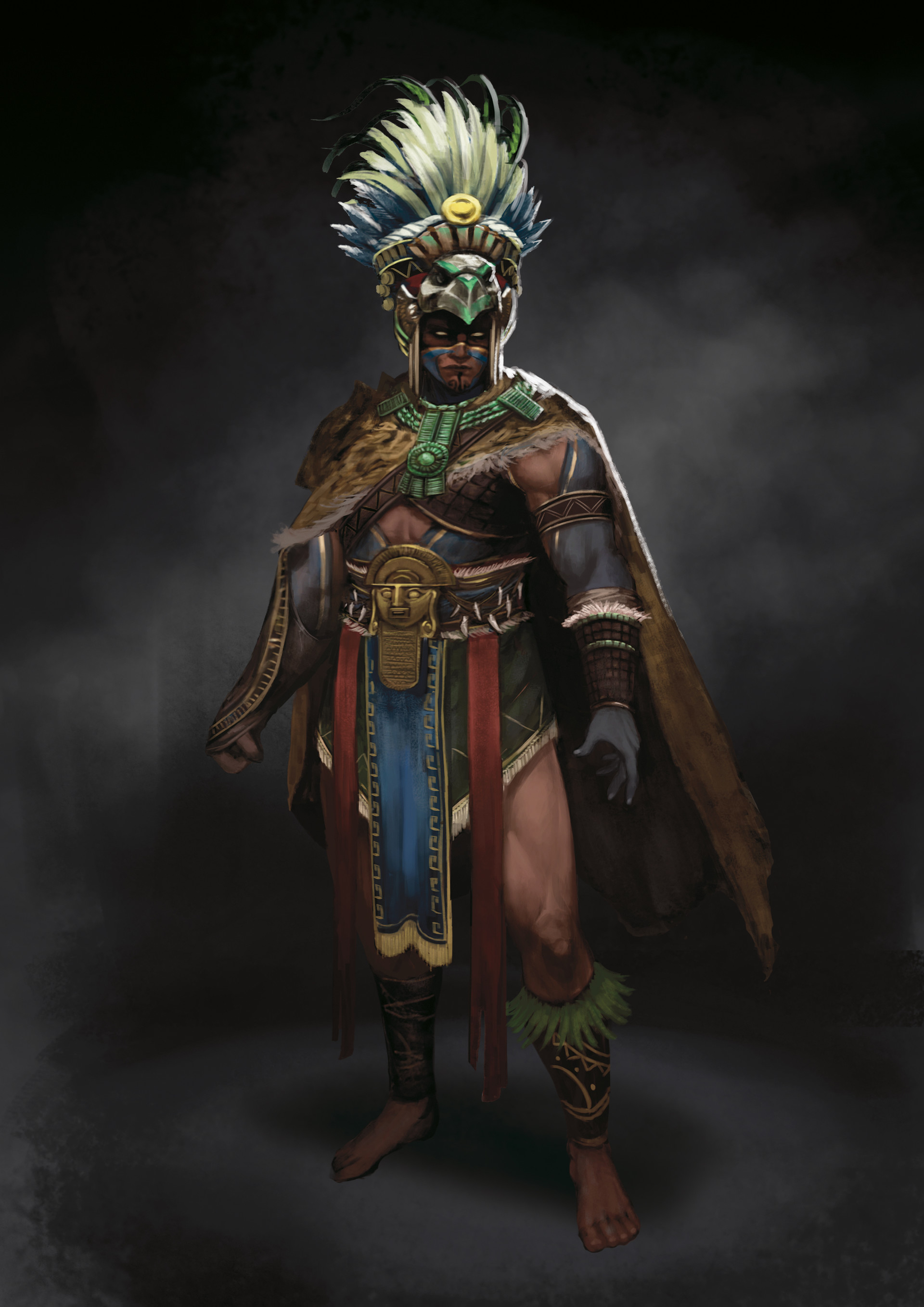 (cee-q-ly)
Cicuillin with a scalloped or fringed hem, are the predecessor garments to xicollin from the sang's time as exiled refugees. They are still worn by their sister tribes in the shadow plains as the principal apparel for aristocratic males.   These warg xicolli are the same sleeveless, fringed garment worn by the sang, except for being predominantly red. Though, there are white and black designs worn by warg religious leaders and that are often set as offerings too.

Competition Homepage
In response to the prompt What's the latest fashion trend in your world?

Good Questions.   I elaborated some in the article. But generally, these clothes are mostly owned by officially recognized temples and cults in the city and by very rich nobles who work in the priesthood.   The repeated mentions of bone pattern is meant to imitate death. That is, they are apart of rituals that mimic dying, to intimidate others with human skulls as an incarnate of death or to be worn by important dead people for burying/burning. There are many iterations of the vests used for related but separate purposes.

The art is amazing! Have you considered doing a history of how the Xicolli came to be?

That's a good suggestion.   I included a mention of the xicolli's preceding style to show where it changed from and how much more complicated sang identity differentiated from the rest of their cousins.

Nice article, I like all the details you have about the outfits and that they use materials that are not often seen in worldbuilding. I also like the idea of people destroying the clothes after they have been used. Though how often do they perform those ceremony and need new clothes? I imagine that having to spend money and resources to make new clothes is part of the purpose, as a sacrifice for their religion.

You're right that giving up a valuable object is apart of various ceremonies (else it is no sacrifice), but when they have to do it can vary greatly. Some are at the whims of the speaker, others occur yearly and there's one that takes place every 52 years. What the ceremonies have in common is that they rely on these costumes as they revolve around 'death': Someone is slain at the alter.   The only exception, but no less splendid, are those owned by the priesthood who just issue the garment to those priests assigned to kill, and then return it to storage. These are the ones seen most often.   The others are personally owned and commissioned by the rich as apart of high class funerary or pseudo-funerary practices. That includes events occurring infrequently, even once in a lifetime.

Very nice article! I like how you included many versions of the garments each with their own special type elements. And as always the art is on point again ^^   Nice concept to have them destroy the clothes on regular basis. I wonder though why it is allowed for children to wear it as mimicry. Is this not considered sacrilege then? In all nice read!

Thanks for your comment.   It's not meant to be considered sacrilege since it is children under the age of three or five who are otherwise allowed to run around naked. The miniature vests are more like a toy to coax them into start wearing clothes "like the adults" before they are given proper wear.

This is a Cool article!   Your art choices are really fitting, very nice and credited, that's always a good thing! I think your work would benefit from some pronunciation guides as I don't think I can even try to pronounce most names here, but would love guidance on the attempt!   Thanks for sharing this neat article!

Hi,   Since I had mentioned different variations of the costume, I had opted not to put in pronunciation guides. As I thought it would have broken the aesthetic/visual flow in the article? What do you think?   Do you have any other criticisms?

IDK if they existed when you made this article, but now you can use variables to show pronunciations when you mouse over a word.

Yeah, they recent incorporated pronunciation boxes into the template titles but I'm not used to the variable features though.

These sound gorgeous and interestingly varied! The ritual values make them quite neat.

I really LOVE aztec culture. I actually had elves based off them when I first started. It is SO nice to see someone using them as a base. I love the art and visuals and the style here, as well as information provided! Super great article!

Reallly nice article and very detailed!!. . I really love the aztec "inspiration" of these garments and the civilization that they belong to. The only thing i missed is the history of these garments, but as i said a really good article, i enjoyed a lot reading it!!.

Thanks.   Was the "Cicuilli" section on the side bar not enough to address history, you think?

I love the way the article is constructed: very clean and light. It's short but in the same time conveys a lot about the garment and its placement in the culture.   On a slight downside, the large number of foreign names (from outside of my cultural circle) made me feel lost and intimidated.   Additional points for utilizing Aztec mythology. I don't see that very often. :)

Thanks for the feedback.   Do any of the phonetic spellings help?