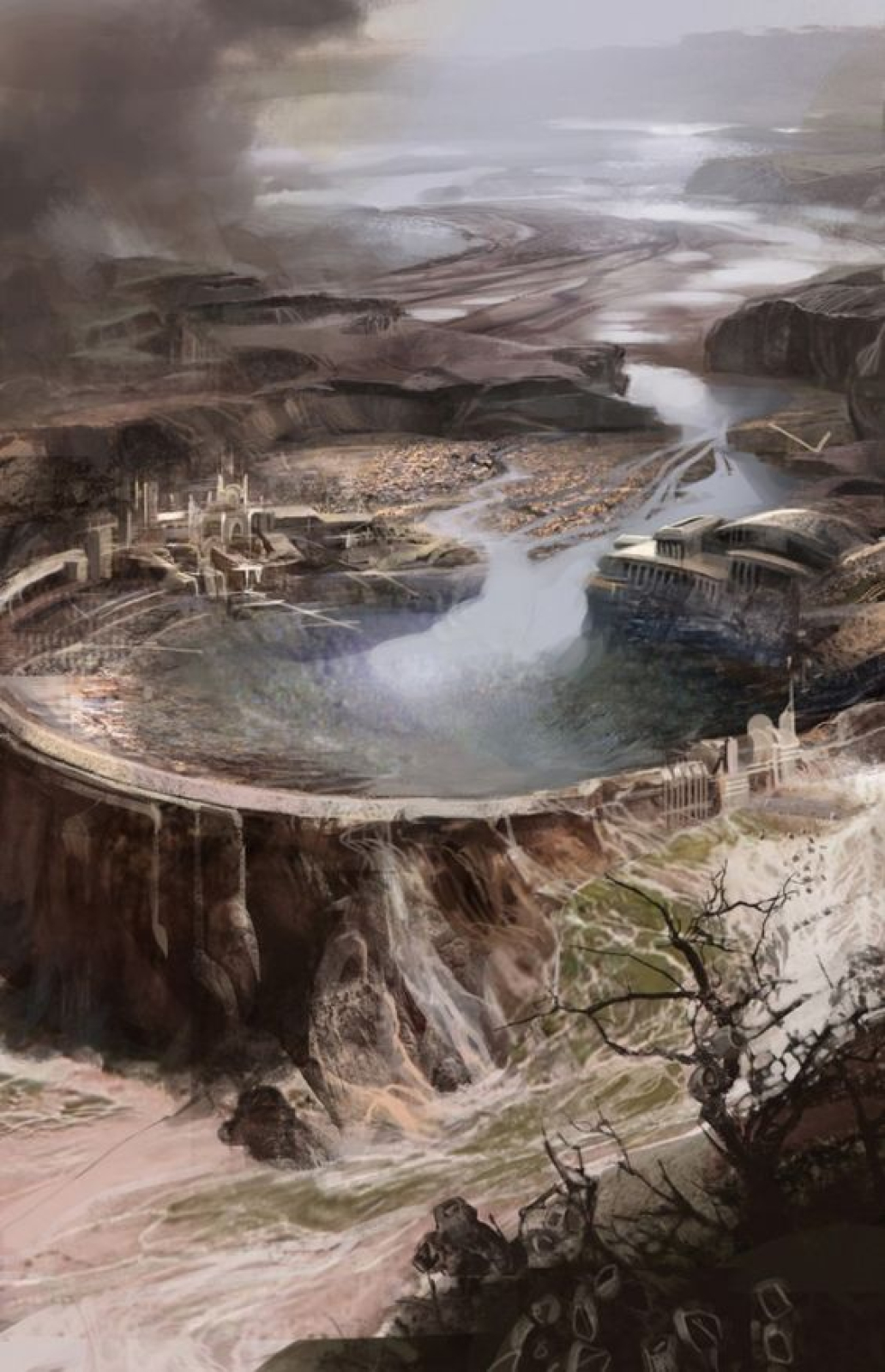 The original full blooded colonizers are a minority in the present day. They are still a part of the upper class but they are not as influential as they used to be.

The original inhabitants of the hills constitute the majority of the citizenry, though they can be further separated into several anonymous clans concentrated on the hills that anchor the ends of the Gate.

The original wave of colonizers recruited a sizable number of painted warriors and their families to accompany them, while on route to the direction of Yate. As it happened, these tribes most readily intermarried into the courtiers and natives. As a result, there are many interconnected objectives between tribes, the courtiers and the native so they are not necessarily always uniform.

Simply put, the governance of the True City is divided in two: Civilian and Military.

The kolarch is the titled leader of the civilian government and de-facto ruler of the city. He, or more often times, she is chosen from the upper class. This office officially acknowledges the Corn Queen in the far-away Corn Court as its head of state.

High Command is a group of 5 seasoned and experienced warriors bearing titles that denote their expertise and responsibilities in Gaioor's army. They are charged with defending the city and its interests within the Floodlands. The offices that compose High Command include:

Resting atop the Gate are rows of heavy wands made of a metal shell and a secret core, specially commissioned and developed to launch fire as far as the stony shores. 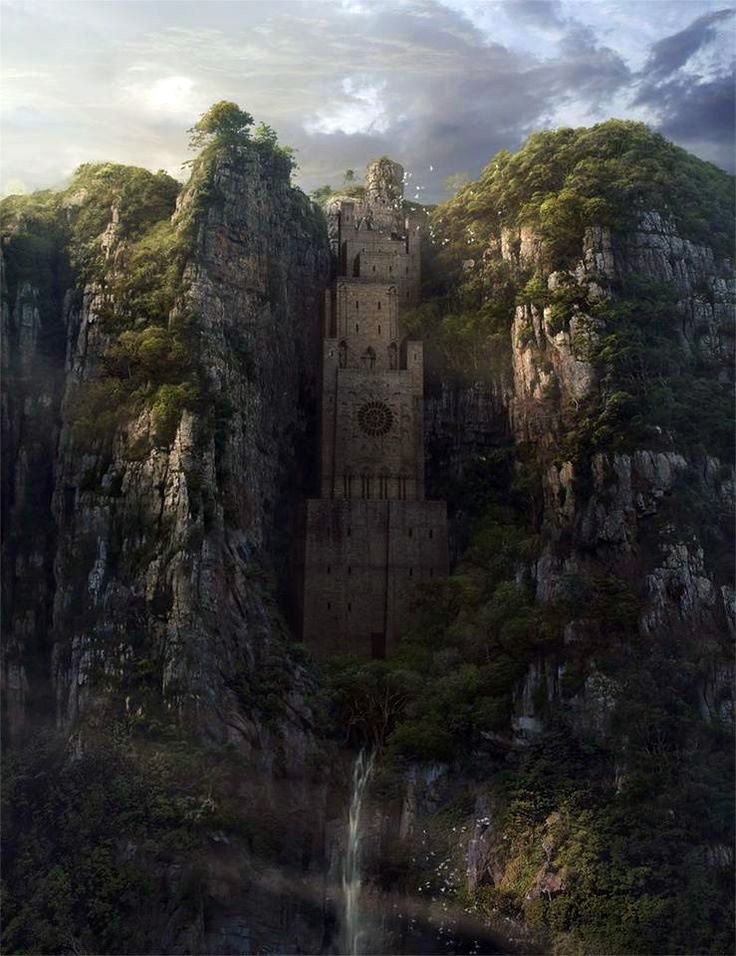 Castle in the Green Cliffs by Yong Park
Really a carving onto the cold facing side of the Bad Step. This monument is sometimes called the "Witch's Watchtower", as it was designed by a Brine Marsh witch.   Its purpose is to position a powerful lens, whose composition is classified, to overlook the various passes leading into and away from Gaioor's North-Eastern passages in the Wilds. The watch tower is able to give early warning to the city by showing observers, stationed atop, future occurrences over the environments that are fixed in its glassy gaze.

Much of the geography so favours the defender that most of Gaioor's leaders in its history did not bother with putting up man-made defenses.

In truth, this area is fully open to the cold swamp. True defenses lie further behind at the original boundaries of Gaioor, where the Bad Step shrinks from the sizable collection of mountains it is further north, to modest rocky mounds.   The farm lands beyond that, bulge well past Gaioor capacity to reasonably defend. While the funds exist to finance the proper infrastructure required, the situation has been left as it is; for it is not believed that those who live in the Deep Swamp are capable of such hostility. Therefore, 2 or 3 garrisons are stationed on the extreme ends and center of what is essentially the agricultural district.

There is an easy path into the normally difficult to enter canyon named Giantsfall. Also called the Dry Bowl; this is a difficult place to live, but a small community of peaceable nomadic people have called it home for a long time.   Movement in and out through the Gaioor pass is tightly controlled by the city that gives the pass its name. When it was still undeveloped, this pass opened to the sky with natural rock walls on either side. But with the growing importance of the mining industry, High Command decided make it more defensible. 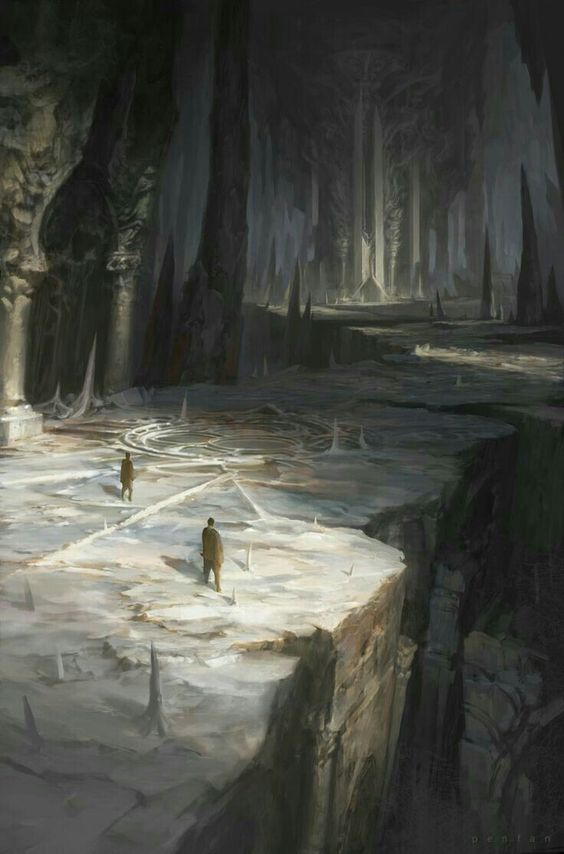 On approach, it looks to be a black wall that turns two mossy hills into one; with several tree trucks distantly crowning the top. The Gates of Yate predates modern man's existence and given its abilities, was never meant as a defensive line. Regardless, it projects an imposing aura on those who approach, and perhaps it is this feeling of impregnable invincibility that discourages Gaioor's enemies from testing them in the first place.

The western and northern directions refer to the curvature slope of the two hills. There is an area that wraps around the circumference of the hills christened the 'Floodline', which marks the maximum water levels that can be expected during flooding. As a result, it also serves as the ideal place where foreign traders, local merchants, fisher folk and ferry men park their vessels when not on the water.   The hills are easy enough to ascend once the flood waters come and there is not far to walk. But during the dry season, when one must start the hike from the base, they are also impeded by stacks of rafts and boats made from timber, cloth and grass trees that now aid to fortify the hills by acting as haphazard barricades.

Many valuable ores can be found and many mines founded where Gaioor, opens into Giantsfall. Gold, tin and some iron are known to be sourced there, but there are more state owned mines where ordinary miners follow special directives to extract plain-looking rocks for the Talon.

Whether through foreign trade, or nature literally washing them ashore, there a many previously unknown finds that were discovered simply by visiting a Yatei market.

Often considered as a school to become a god; the Talons are three interconnected towers that look to emerge from Longma and hook towards their central axis, reminiscent of a bird's talons. It was raised on an artificial island and constructed using the Queen's Method of building tall structures. Once the skeleton was completed, the towers' outer wall were given an ink stone facade and three massive coloured jewels to perch on the Talon's claws.

Along either end of the leaf-shaped lake, where the people live, are channels cut into the rising hills that carry the water uphill through turning devices. There are two designs:

These machines are heavy closest to the water line; made of red wood coated in resin and bolted with iron. They comprise of rows of wheels built into a stepped foundation that become lighter (due to lighter materials being used) the higher up the hill you go.   Four wheels are arrayed at every step level that deliver water to a dedicated reservoir from where water flows back down through enclosed pipes to neighbourhoods. Barbegal Factory
This one is the older of the designs and not very efficient, but is more hardy than the newer system.

This still consists of several levels feeding into separate reservoirs which then flow naturally through the pipes. Only, in place of wheel; flattened and softened grass trunks are wrapped helically around an axis that send water uphill when turned.   It also has the added feature of being buried to lessen the chances of contamination. This is particularly important because there are many more of these that service the most densely populated parts of the city, closer to the Giantsfall and Wilds areas. 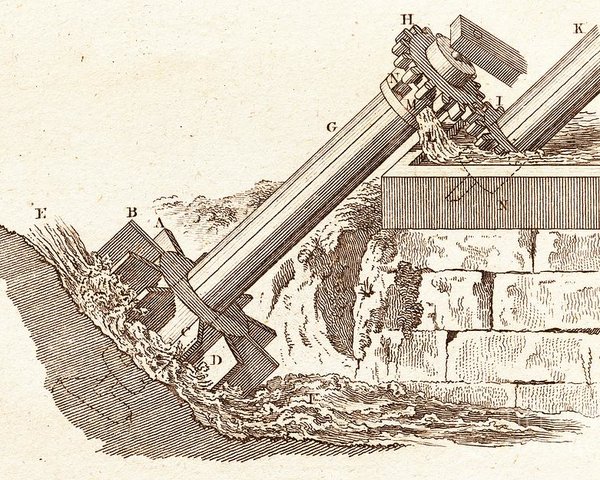 The Gates of Yates is a semi-enclosing grayish black and green wall on the North-West limit of Gaioor that doubly serves to block tsunamis and filter the sea water into fresh water. It is by this feature, that a wall becomes known far and wide as a gate. This water that passes through the semi-permeable rock empties into the Longma Basket, the name given to that basin between Gaioor's high hills where the fresh water collects and is distributed throughout the city.

Political decisions have typically come down between the historical peoples of the land and the colonizers. Though there are many groups and sub-groups who express dissenting opinions, they are all characterized generally as being between:

The womyn are the descendants of the colonizers who primarily intermixed between the courtiers and the painted tribes who migrated with them from the painted shores; many of whom are politically savvy.

The original inhabitants of the nameless twin hills that Gaioor now occupies. They have since integrated into the class system introduced by the courtiers; and hold many military positions.

Ten generations ago, lived a low born woman: Metha, of modest means who grew too ambitious for the wills of courtly life; and as with those before her, charted a path where she may spread the glory of the Corn Court. But to the confusion of her fellows, she chose to head south, in stead of north, to begin civilizing scattered peoples living there.   Past colonizers had thought it too impractical to attempt permanently setting in the floodlands. The soil was long ruined, fresh water scarce, and the high hills that rise out of reach of the floods were long occupied by the locals. Nevertheless; that was where she went, ousting the natives and employing them to help build the new colony.

Before Metha, the existence of the Gate was thought to be a fanciful tale to courtiers for many years. But when Metha laid her eyes on it, she was a skeptic no longer and took the hills it was anchored to and claimed all of it for her home.   Court mages and professionals endevoured to uncover its secret workings and discovered many other marvels tither to unknown to them. The phantom stream's healing properties, Eeat's insights from the past and to make no mention of the flora and fauna brought from the ocean depth to the surface shores. It was such a popular destination for the learned and wise, that a past Corn Queen had to put a cap on the number allowed to go.

Gaioor sits on a geographical tripoint between the Floodlands, the Wet Wilds and Giantsfall. Its position makes it an ideal trading hub between many unfamiliar worlds who are puposfully kept apart when two or more visit at a time so as to maintain Gaioor's importance as an intermediary.

The majority of the city rests on the hilly parts of the Floodlands; and surrounding the Basket, its residents have built permanent homes where 7 in 10 live.

When the settlement first got its start, explorers would venture far to hunt game as the only source of subsistence. Overtime, the land was cleared and leveled so as to become Gaioor's breadbasket.   The few families who live in this part of Gaioor live a good distance away from other families. Each tending to their own yields, but not without assistance from the warmer side of the city. All of the human waste generated by Gaioor is carted here to be recycled as top soil.

Upon first look, there does not appear to be much to be had of he canyon opening. Passing through a wide slope, that serves as a passage, one comes across and even wider ledge covered in dry, cold dirt and edging over an abyss.   For years, this untapped potential was ignored until by chance, a wanderer found deposits of tin in easy reach. Since then, multiple mines have established themselves on lead, gold, silver. Even diamonds, if you go deep enough.

The pristine snaking lake at the very heart of the Gaioor. During the floods, when all other settlements must brace for trauma, Gaioor's wholly controlled fresh water lake is continually kept level by the sea being filtered through the permeable rock that makes up the Gate.