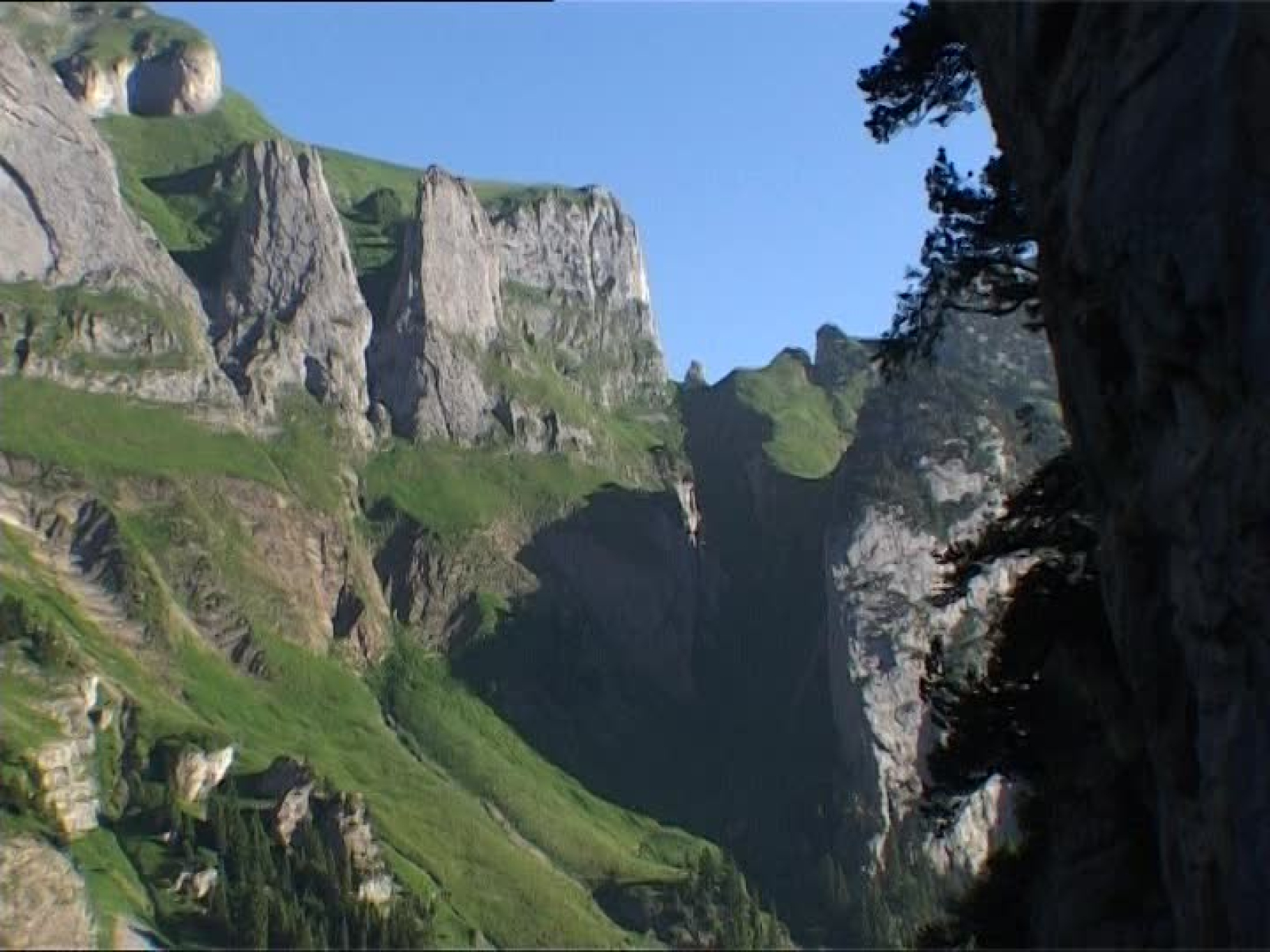 The Bad Step is the longest continuous mountain chain in the world. It starts at the mid-section of the Northern Range and progressively shrinks as it moves south. Geographically, the Step empties into the Dry Bowl, but it is popularly thought to end inside the city of Gaioor.   The upper echelon that mark the edge of the eastern valley have several deep breaks between mountain peaks which are locally called ‘Jumps’. On a clear day, these massive and successive peaks and troughs resemble piranha teeth. On days obscured by the Ghost River; snaking in-between and, at times, overtaking Jumps for several leagues over the range’s sky, has proven to be a hazard for travelers and locals, alike.

There is one real-life account of an Eo herder who lost his way on a jump, fell into the ‘river’ and landed on a travelling merchant, killing them both.

An overview on the shape of exposed rock reveal that layers and layers of folded granite primarily make up the site. What makes the Bad Step distinct from all other mountain ranges is the near uniform collapse of the peaks and slopes on the side of the Cold Swamp, which give the Step appearance of a singularly huge black wall from that side. Such an apparent natural disaster brings to mind thoughts of the "Rock Rains" at the end of the era of the fourth Sun.   Within what remains standing, are long and deep tunnels running for unknown distances through the earth. Walled with oily black stones with white and greying etchings of an undecipherable tone; these places have been termed the "Mountain's Blood", since they seem to go on and on; snaking through the underground like the veins in a man. Such veins often break out into the open air on the 'Cold Side' and offer some much-needed ventilation for those wanting to explore them. The entrances of these tunnels on the 'Valley Side' are most often the entrances and/or the interior of the many impregnable Cavern Cities carved into the mountain sides.

Winter Plum: A white skinned fruit that grows out of the shear face of the Bad Step. Its flesh is firm, juicy and purple with a single dark seed at the center.   Eo: Named after the sound it makes; Eos possess a stout three-toed, an elongated head, slim forelimbs, and longer hind legs, all of which are characteristics of a good jumper.   Eo Weed: Eo weed has a stout, bright green stem that is frequently spotted with dark red and hollow red-spotted leaf stalks that produce sturdy bristles. The stems grow to more than 6.5 feet high. The hollow stems vary in diameter, occasionally up half a finger nail. Each dark red spot on the stem surrounds a hair, and large, coarse white hairs occur at the base of the leaf stalk. The plant has deeply incised compound leaves which grow hugely in width.   Eoweed is a biennial plant and usually begin dying after they have cast their seeds. It usually flowers in its second year during a dry season, with numerous white flowers clustered in an umbrella-shaped head that is up to 2 feet in diameter across its flat top.   The plant produces thousands of flattened, long, oval, dry seeds that have a broadly rounded base and broad marginal ridges. Tall dead stems may mark its locations during winter.   The sap of the plant; when the contacted with skin exposed to sunlight, causes severe skin inflammations. Initially, the skin colours red and starts itching. Blisters form as it burns within two days. They form black or purplish scars that can last several years.   Wind Sickle: Thin, vine-like, non-flowering plant that can only grow by grasping around larger plant matter or man made structures. Although their stems are thin and spindly; it can grow as thick as a bear's coat.   One feature unique to Sickle leaves is that they are capable of carrying single seeds great distances in sufficient wind.   Shrike: A territorial medium size bird with grey, brown, black or white feathers; depending upon the environment. Their calls are strident, have hooked beaks and make regular use of exposed perches to watch for prey and advertise to rivals. They catch insects and small vertebrates and impale their bodies on the thorns of plants or on any nearby sharp point serving as a cache that might last for two days.   Although territorial, they also have a migratory season where (just before the rainy season) they fly from one mountainous area across the valley and lakes to another mountainous area on the other side. Whereby they begin the process of fighting for territory again. The first clutch of chicks of a mated pair serve the parents in raring the next clutch. And when that clutch matures, complicated roles begin to be assigned to the offspring with the parents continuously being the only ones allowed to mate. A definite hierarchy is established, reminiscent of ant colonies, and aerial fights or border skirmishes regularly being a staple of neighbouring bird families. This will continue on until the next migratory season where the family breaks apart and each surviving member searches for their own mates.

Snow: Even though it is snowy on the top thirds of these mountains, they are still rich in bio-diversity throughout. Collecting snow is a relatively cheap means of earning a modest income, provided it does not melt all the way before reaching valley markets.   Fungal Groves: Housed in the deepest, reachable depths of the cities' caverns are grown a rich assortment of mushrooms, mosses, molds, certain nuts, creeping figs, sweet worms and other species that grow well in the damp dark for purposes of local consumption.   But what makes these groves truly valuable is that in them are grown a species of fungi that is used to manufacture fungal fabrics that are water resistant, thermally insulating, rubber/leather-like, and light weight.   Black Road Access: The black road is the name given to an extensive network of carved steps and cleared pathways that connect the cities of the step to the deep, unknowable places in the deep swamp.   They start from the trails chiseled into the cold rock face as part of the Bad Step; sometimes looping into and out of the Mountain Blood veins as they descend to the Sink(s). The sinks maintain a clear cut path through the wilds before merging into the winding reed roads as part of the deep swamp where the pale ones await them.   Because of this, the greatest resource to be found are the strategic locations along the mountain passes that deliver on trade.

The isolated echelons that rise between the peak and mid ranges that are often home to the Elkin.   The ‘Jumps’ got their name from the jumps from when condemned nobles are thrown into the swamp below in velvet sacs.

The very tops of the Step's mountains, sparsely populated and more often covered in snow.   Observatories and laboratories for observing terrestrial or celestial events from the cold summits are built by the worshipers of Centzon.

The middle height band that stretches all throughout the entity of the Bad Step.   The majority of the Step settlements are located within this band of habitability.

The very base of the Step where the mountain range merges with the valley floor.

An area of the northern slopes prone to earthquakes that have curious effects on the human body and causes rock rubble to fall and form into some of the jagged hills below.

The rest of the Slopes that are bordered with the rest of the valley of man. Long steps and inclining paths made of gravel and wood, or carved from the bedrock to ease the trek through the lower slopes towards the peaks.

A forested area disputed by three settlements and making for a hostile stopper in trade relations.

The part of the Bad Step that crosses from the valley of man into the Floodlands that marks the end of where the flood waters can go.
Alternative Name(s)
Step
Type
Mountain Range
Included Locations
Included Organizations
Owning Organization
Long Step
Related Ethnicities
Related Tradition (Primary)
Inhabiting Species

Narrow mud and clay, dirt paths primarily made and used by Eo herders.

Long steps and inclining paths made of gravel and wood, or carved from bedrock to ease the trek on the lower slopes.

Walled with oily black stones with white and graying etchings of an undecipherable tone. These are unmapped tunnels craved through soil and bedrock that cross unknown boundaries, but are a rumored path to the valley floor.

A long windy mountain trail that criss crosses over natural plateaus, carved steps and in and out of blood openings.