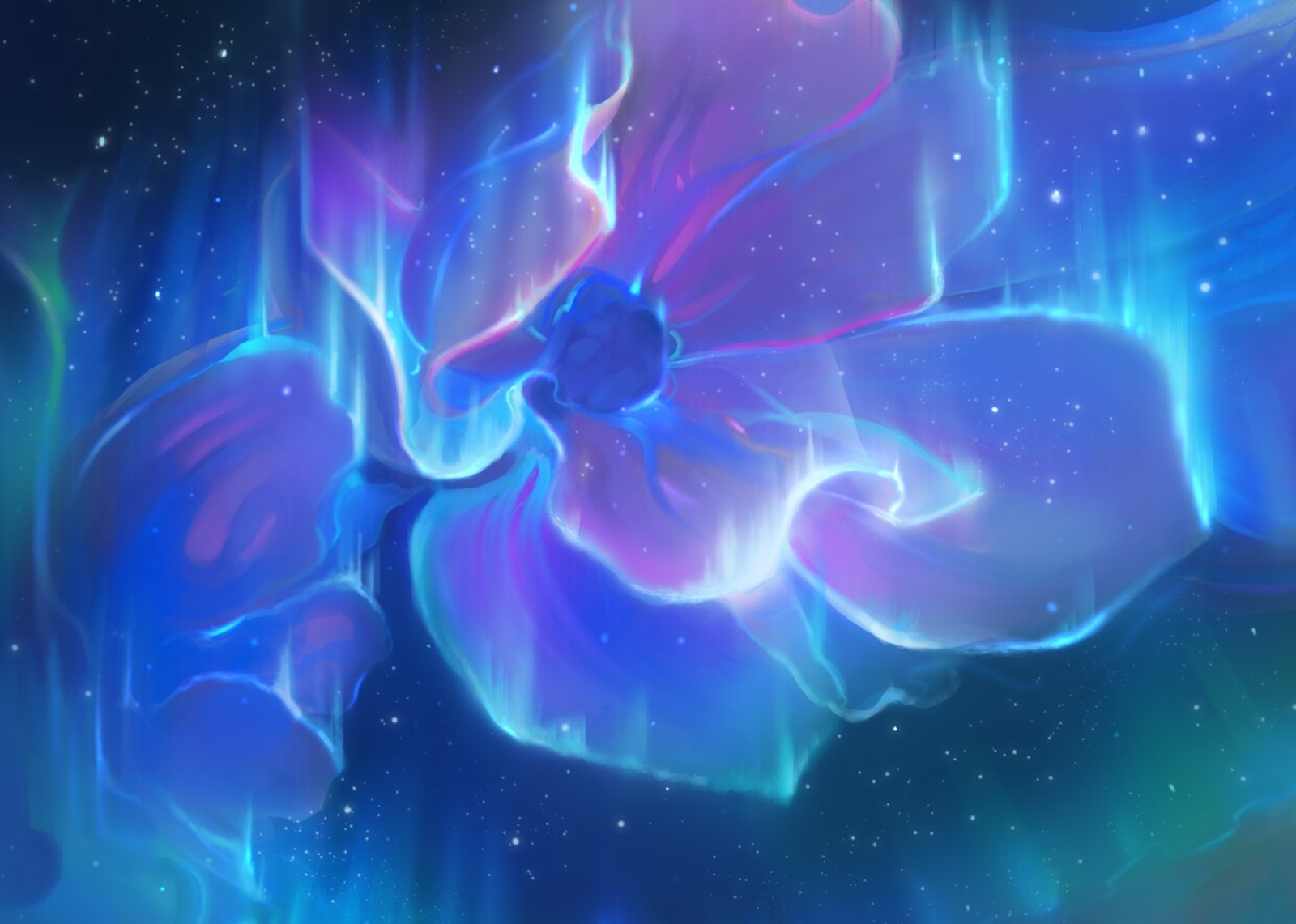 The rainbow serpent materializes itself as blinking rainbow colours streaming across the frozen skies that border the Bad Step.

Alia and Rhisíl by Jana Herrmann

Wavering strands of cold-coloured lights woven in mantles of white, green and blue herald the coming of the harshest of winters and scorchest of summers.
— Paxcua on the spread of the night lights

Residents on the Step's peaks blame the southwest wind for bringing famine during dry seasons and diseases during rainy seasons. One demon in particular, Pazu, is considered an evil spirit. Though he drives and frightens away other evil spirits, thereby protecting the people against plagues and misfortunes. The hope is that separate mountain communities dance false tales of their lives and their neighbours' lives to convince the demons to target them instead.

Filmy drapes hang under the icy edges to stir and sway in a light breeze without wind. They make no sound from where they swing long curtains of light. It is a beautiful nightly sight, but can make the hair stand on ends.
— Pachilia the Thunder Bird

The rainbow currents are normally restricted to being seen at the peaks. However, there are times when forces push them past the Bad Slopes and hover over the rest of the valley. The valley people greatly treasure the use of colours in their daily lives and the rainbow arches that follow the rains. But the rainbow ribbons dancing the sky like snakes scare off the dragons and regularly herald some sort of ecological disaster.

As with all art, step music and dance are performed to please the gods. It is not for entertainment or to show off knowledge or skill. Certain music, dance and musical instruments are considered holy and mistakes made while playing are thought to offend the gods. The music is generally accompanied with a dance considered to be a prayer-like ritual.   It also expresses the political, social, and cultural issues facing the various short steps in the Long Step. Such performances may inflate the current standings of their towns and cities and raise the moral behaviour of their families.

A person's profile with their right foot firmly planted on the ground while the left is bent with the ball of the foot pointing groundward. Variants of this pose can have different meanings depending on whether or not music is playing or on the costume design they are wearing.   For example, a lifted heel without music or dance costumes describes drunkenness. While with them, can describe battles and warriors who engaged with and captured enemies.

A dance is performed by the higher lords. They wield an ax in one hand and a serpent in the other, with a woman grasping the snake's lower body. This performance under the percussion of a rain stick does not convey any particular information to report on humanity's dealings. Rather, it is meant to distract the rainbow serpent if the truth is too unappealing.

Wooden trumpets, bone flutes, conch shells and grass flutes are played along the edges of matted squares where males dancers in feather dresses reenact dramatic events since the lights' last appearance. The sounds typically start with kettle beats while dancers endure hallucinogenic medicine to put them into visionary trances and become 'companions' to the rainbow serpent.

It is strange for a sect to espouse an absentee deity. But the worshipers of the rainbow serpent abandoned almost all of the traditional teachings with the view that since the great serpent in the sky appears and vanishes at a whim, they are not totally beholden to their wayward actions.   Except for when he returns to judge their state.

It sounds to outsiders, that the step folk act as a misbehaving child would with their parent. So long as nothing is obviously broken, they can get away with anything.
— disguised murtana traversing the Bad Slopes

Rainbow serpentism is home grown and worshiped since the first (original) step folk, and before them, by the long-lost giants. Step children find particular delight around the nights their parents allow them to attend.

Sinklings at the bottom of the cold swamp get a regular view of half of their serpentine deity. Though far less often than their cousins on the Step Sinks area are prone to regular rains that obscure the sight, in addition to the shear distance.

It's apparent that the step colonies are growing increasingly distant from their parents. I can think of no better symbolism than looking up and not seeing the god we are meant to worship. Unless we were meant to worship the Step.
— question taken from the Mytenii Magazine

Organization | Nov 15, 2021
Every night, the rainbow snake slitters across the sky, but not always where astrologists wish they would be.   When he burrows himself from the icy sky, they direct their lenses to draw and colour its luminousness.

Organization | Sep 30, 2021
Even the sinks can see the rainbow god, though it can be difficult to discern; becoming emblematic to divisions between Step Folk and Sinklings.   Ordning opt to travel the wet wilds under the serpent lights to contrast the winter sun's twilight.

Other Traditions and Tales

Remove these ads. Join the Worldbuilders Guild
Memories
In response to the prompt What does the rainbow symbolize in a culture of your world?