Religions revolving around the serpentines have existed in the valley for as long as men have lived in it. This is unquestionably so, in no small part, to the feathered serpents who shadow the plains and deliver their bodies to the world's warriors, artists and holy men as reward to their vigil.   There was surly a time when serpentism existed as a single sect operating under the Quetzalcoatls of various prominent cities. But, it was likely that rivalry emerged between the different Quetzalcoatls that thus sprang versions of this religion. Some decried the divisions, due to a loss of power or genuine belief. Other, saw it as the natural and inevitable molting resulting in the continuation of a beautiful world.

The tradition is present in several ancient cultures.

Part of serpentism's teachings originate specifically from the Tuskin who wrangled dragons for consumption and labour.   Being the massive creatures they were, they hunted larger creatures to sustain themselves. Which appeared to humans at the time, as an earth bound mammal dominating the sky beast; and then thought they could eventually do the same.

Common snakes are seen as entities of strength and renewal. And their bodily comparisons to winged dragons lead to an easy fusion between dragon and snake cults.   The ancestral home of modern serpentism is the Mist hanging valley, as evidenced by the snake temple sculpted into the Hearts Mountain and where much of the snake wrangling traditions and venom practices were developed.

Branches of serpentist sects slithered out to the greater valley to rapid acceptance. But within Salt Side and Dragonsgrave, it diverged between snake and dragon focus as dictated by the environment.

Serpentism, in most of its iterations, divides the world into thirteen heavens and nine earthly layers. Each level is associated with a specific set of deities and astronomical objects specific to a local region. The most important celestial entities in the religion are the Violet Sun and the three Moons; with other sects giving consideration to the black divider, two Seas, the Winter Sun, etc.   Great importance is attributed to the sky. Because dragons only lower themselves to the ground when they're about to die and regular ascend beyond sight. It is believed that they spend most of their time interacting with clouds, stars and any known or unknown cosmic phenomenon.   Worshipers believe that the divine pervades and interpenetrates every part of the universe and extends beyond space and time. The main serpentine branch as recognized across most states is the worship of Quetzalcoatl. That is, worship of the feather dragons themselves as deities. Sky bound Gods, whose shadows they cast on the earth while overhead; whose huge feathers we can touch; whose bodies, men can partake of.   Seen in this light, the creatures are symbolic of a blending between the heavens and the earth: existing within both in equal measure.

As the material world is a creation of the divine, credit is rightfully attributed to them. Even going so far as to offer their own bodies to strengthen mankind. The stripping of dragon corpses, therefore, is a holy act and must given the reverence it deserves.

In taking from the gods to survive; the gods are themselves deprived of their own survival, so it is onto us to preserve them.

No matter how hard it is, it is incumbent on all followers to be aware of their own vices and virtues and to consciously act to counter previous actions. Else-wise, the cosmos would endeavor to equalize your fortune to devastating effects.

Things in opposition—light and dark, life and death—are seen as expressions of the same unity. A belief in a unity with dualistic expressions has penetrated deeply into the valley cultures. Even if it is not consciously thought about, many families keep a pernicious pantheon of idols they pray to stay away, as well as their primary pantheon they pray to for fortune.

Serpentist priests see the different gods as aspects of a singular and transcendent unity; but the masses are allowed to practice or worship any god they wish without fully understanding the true unity concept.

The absolute authorities in charge of the major pilgrimage centres and as enjoying immense respect from all levels of valley societies and a level of authority that partly transcended national boundaries.

The priesthood endured very strict training. They had to live very austere and ethical lives involving prolonged vigils, fasts and penances including bleeding themselves and undertaking prescribed self-mortifications in the buildup to sacrificial rites.

These serve in the day-to-day running of a temple and are comprised mostly of school boys and extra girls who assist the realized priest part time.

Monks included many types of wandering curers, black magicians, hermits and other occultists who held to no specific order but traveled far and wide offering temporary service as doctors, teachers and priests. A mysterious cloud followed these men and many of were feared, with tales warning of their approach.

Through state decry, there are many competing religious orders throughout the city. Regardless, the Quetzalcoatls have historically been able to maintained their supremacy by being physically close to the Great Speaker and his Snake Woman.   However, they have begun to be seriously challenged by a fast growing sect that combines valley traditions of the serpentism with the sang's long forgotten religion.

It is strange for a sect to espouse an absentee deity, but the worshipers of the rainbow serpent abandoned almost all of their traditional, religious teachings with the view that as the great serpent in the sky appears and vanishes at a whim. And therefore, we are not totally beholden to our wayward actions except for when he returns to judge our state.   It sounds to outsiders, that the step folk act as a misbehaving child would with their parent; so long as nothing is obviously broken.

Studies of Jory, the half snake goddess, more follows the line of a philosophical outlook to augment how one can live their lives. There are those who devote their entire lives fervently and are well respected, but no one is required to do so.

The Cult of the Dueling Snakes has existed for many years, but only recently has it attained such popularity. All of the Garden Cities incorporate the black and white dueling snakes in some way into their city sigil; as the religious temples are marked with the images of two snakes consuming each other carved into places of prominence.

A cult that is mostly rooted within the Otoerm Coil that uniquely prioritizes duality in nature as exemplified through their two snake gods: Massy and Set.

This sect has been confined within Sangsalgu as it combines serpentistic beliefs and features with the sang's original patron cat god.

A sub-sect of serpentism that deifies a living species of snake capable of leaping between tall trees in the Cold Swamp and the Brine Marshes.

Home grown and worshiped since the first (original) step folk, and before them, by the long-lost giants. The rainbow serpent materializes itself as blinking rainbow colours streaming across the frozen skies that border the Bad Step. 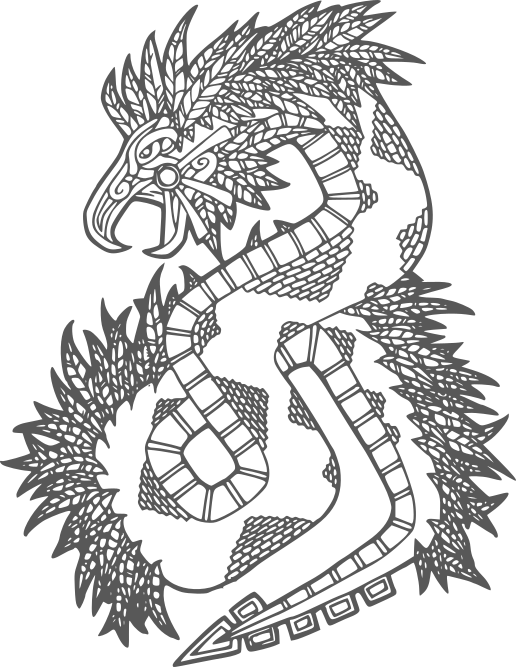 Answering: "Describe the tenets or precepts of an organised religion in your world."
Visit hughpierre's Competition Page Check all other answers to this prompt Competition Homepage