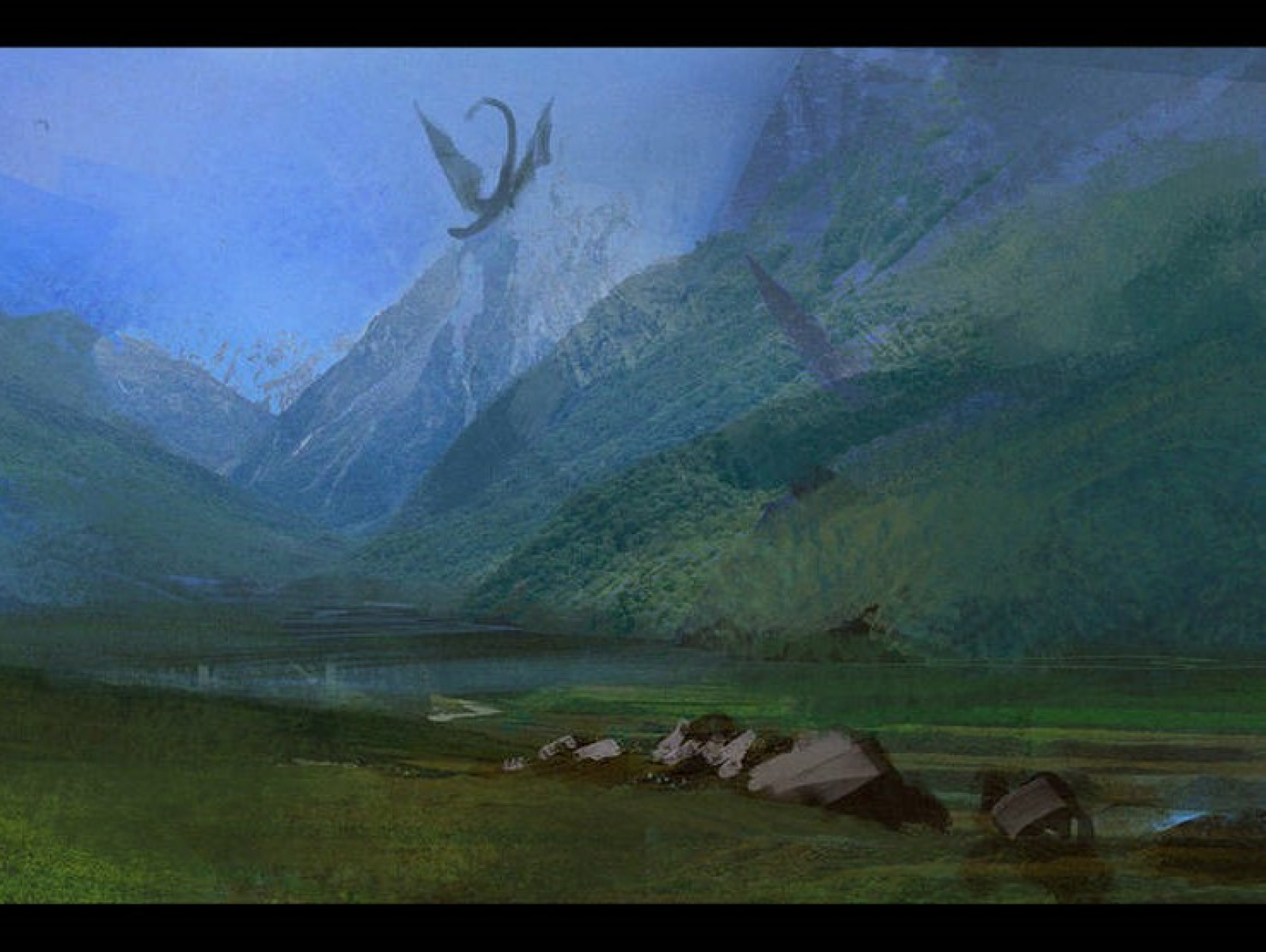 Once home to many timber forests, the landscape has since been shorn to a mostly bumpy plain of pale green grass. It stretches from the lower boundaries of the Range in the north to the stalk covered Mais in the south; and from the Step's base in the east to the great lakes' eastern shores. Dragonsgrave is so named for all the feathered creatures that drift gently down from the sky; so high, to their final resting place on the plain.   Although there are many ice melt rivers and wild game to sustain small settlements, the 'grave' in Dragonsgrave is as applicable to people. There has been a marked decrease in the number acceptable prey animals to be found here. Therefore, fighting -which had been limited over dragon corpses- has since grown over fighting for hunting rights.   In addition, the most common type of grass in the grave, nip, protects itself by allowing its leafy exterior to become stained and act as a barrier to further contamination. Via un-understood means, the colour of a stained nip changes slightly when disturbed by wind, rain, animals or other motions which results in brilliant waves illuminating the land during dawn and dusk.

Dragonsgrave can be divided into three sub-regions:

Cobo: The common Cobo is a black scavenger bird with long gawky legs, keen eyes, and an iron-grey cowl covering their necks, which gives them a ludicrous resemblance to a certain deity of the Salt Mists.   These birds are ground-nesters and despite their prolific numbers, the nesting places are difficult to find. Its eggs are considered to be a local charm of yesteryear, being rare enough to be considered a sort of wishing device.   Cobos are often called the "official feeder" in many settlements across the valley, even within Sangsalgu, for they wait patiently in rows atop thatched roofs to perform the office as scavengers. They seem capable of eating anything and are a reliable and tolerable means of keeping many areas clean.

Nip: A pale grass that has overtaken the former forests. It encompasses areas around the Garden Plot and stretches to the Mais. For reasons, nip also tends to change colour temporarily to a pale blue when it soaks in dragon blood; and shines green and orange and indigo when disturbed.   Pond Weed: A family of mostly freshwater plants of various height strongly influenced by environmental conditions, particularly water depth. Generally, the deeper the depth, the shorter the pond-weed's distinctive stem. The flowers, which are often overlooked, are greenish-brown and are composed of four rounded segments borne in a spike. They are 2-4 anthers that turn outward on the bulb resting atop its stem. The fruits are spheroidal and turn green to brown, with a noticeable 'beak'.   Maw Bean: A large brown nut the size of a big toe. It grows in pairs in large pods and is considerably poisonous. Often being used as the poison of choice in "Trials by Ordeal".

Gourd Tree: Also called the calabash tree, it sprouts a vine grown for its fruit, which can be either harvested young to be consumed as a vegetable, or harvested mature to be dried and used as a utensil. When it is fresh, the fruit has a light green smooth skin and white flesh.   The tree's valuable calabash fruits have a variety of shapes: they can be huge and rounded, small and bottle shaped, or slim and serpentine, and they can grow to be over 3 feet long. Rounder varieties are typically called calabash gourds. The gourd was one of the world's first cultivated plants grown not primarily for food, but for use as utensils, containers, and musical instruments.   Agouti: Called a strain along the shores, vole by the Tinged and gnawer in the Corn Court; no matter the name, they all smell the same. Agouti is a widespread weasel-like rat that scurries about in low places and tight fittings. Preferring forested areas, they have adapted to deforestation by burrowing and taking shelter in rocky outcrops.   Jaguars: The largest cat species found in the valley and largely extirpated from the valley, except for Catkills.   Panthers: A panther is just a jaguar coloured black, as many comedic legends will tell you. About as common, as well; it ranges in much same areas but a panther's capture is pricier.

We can talk much and more on the rivers that stream from the Bad Step's snowy tops or game that hides in the tall grass. But in truth, why such a large swath of land is so contested is for the dragon corpses themselves.

When a dragon dies in the sky, its body drifts slowly downwards, usually head first. The ever growing shadow on the plains indicates the future battleground for the body's resources.

Bird feathers are a popular commodity to trade. Either as decoration, currency or to mark status, Sang tie a lot of importance to the symbolism of the bird it comes from. Acquiring dragon feathers is a much for involved process. They are just as colourful as the birds' but the aesthetic quality of dragon feathers falls to the wayside compared to its durability. So much so that it is used to fashion custom body armor against the cutting weapons of the enemy.   Because there are such careful steps relating to plucking dragon feathers, contestants who travel to the corpse site do not want to risk fighting directly over the bodies. As a result, contesting for them had taken on a ceremonial event since harvesting dragon corpses are so dangerous.

Harvesting the rich resources of a dragon's body becomes truly hazardous when it comes time to cut into the muscle. To be clear, dragon meat is not edible and has the audacity to rot as if it is. Its fibers are pulled into long stretches to make the most resilient string saws. Most of this resource is salvageable, though, since much of it has to be left in place to mind the bones.

Bendy and hollow, dragon bones so not appear to be made of the same stuff as most bones. They possess a soft, oily texture reminiscent of fish bones and just as useful. Thin, and rather flimsy; to make life in the clouds as effortless as possible. They do break and degrade easily, however, as a 'proper bone' is a bundled cable of smaller rope-like material held together by special muscle. Once the muscle degrades or is severed prematurely, the sudden release of energy causes the wiry ribs to snap violently and launch hundreds of broken javelin-like projectiles in any given direction.

Dragon blood is blue. Similar to some crab species, it is collected as a chemical indicator in experiments and as a component in an anti-freeze paste developed by Sinklings .   Though not poisonous; when consumed, it leaves a metallic taste that can last for a week. In addition to a hot swelling that sufferers have often described as a frog living in their throat. This symptom lasts for three days and is not cause for concern.

The pseudo ivory material that makes up a dragon's beak is desirable for its use in creating ornations and trophies.

There is but one thing that is salvageable in a dragon's eye: it's lens. More valuable and rarer than its feathers, it is coveted for its ability to focus or act as a conduit towards magical feats. Not known how by the common public, these eyes are widely thought to be the source of the Sun Pillars' powers, as well as the means by which Gaioor is able to remotely view their neighbors.

Before people came to take over the valley, the rolling plains were covered in humongous crown trees (now extinct) which would penetrate the dragons upon their landing. The tuskin apparently worshiped these trees in some fashion or used them in some ceremonies of state, religion or simply as a common resource. 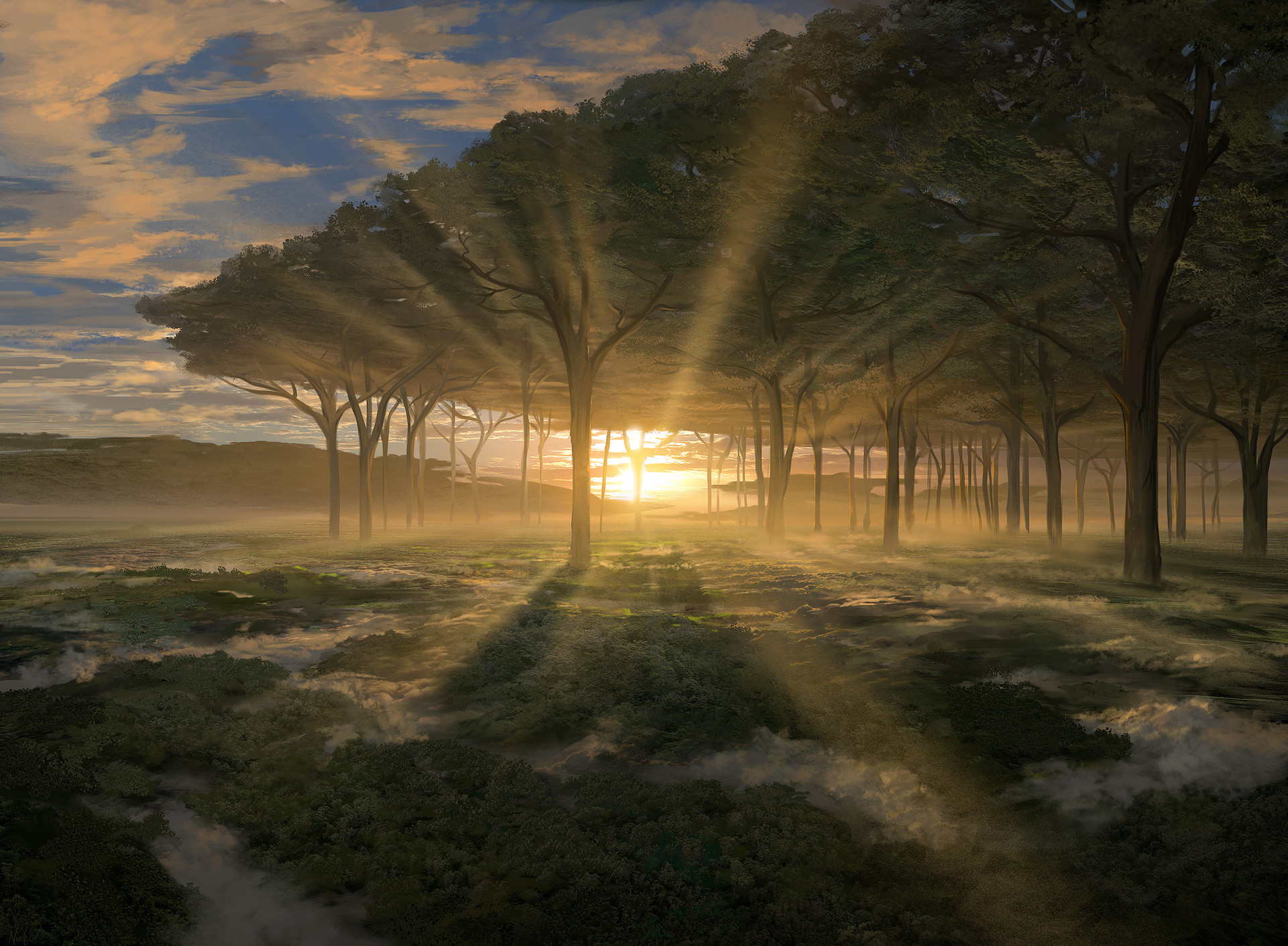 Dragon watching is a fairly common pastime. A few low flying ones cast their small shadows on the earth where children pretend to ride them. It is unnatural for the creatures to purposefully move across the land. Just as we are without wings, they are without legs or arms. All they have are their buoyant wings to keep their serpentine bodies aloft.

Blame is partially placed on the glowing orbs that emerge on some nights from the ground. They fly across fields and rivers for a time, leaving impressions on the grass, before darting straight up. Call them ancestors, spirits or dragon lights (as locals like to do they set a bad omen since they are seen to fall crops. So it is equally believed that they must also have fell the trees of the past, and will so bring man low. In a similar path, the dying creatures themselves may be the major source of the problem. The decaying matter and blood of a dragon has been consistently shown to have a hampering effect on the growth of certain plant species.

There once were many civilizations who settled here, the ruins of which dot the landscape and were used as land markers for travelers. Now there are fewer because refugees, runaways, looters and the disenfranchised have turned them into their homes and who also cause some disruptions in cross-plain trade. In parallel, is a broken road of petrified earth (partially overgrown); whose sectioned bits are separated by miles and run from Coil territory, through half the middle of the grave and comes to rest on the southern slopes.   It is believed that the giants made this road after centuries of stomping on the path. But giants must have been hotter than men because the road is made of catar: a natural crust of white melted rock and a glassly interior that grows darker nearer the center. Erosion further exposed the depths of the road which turned it into the resting monolith it is today.
Alternative Name(s)
Type
Rolling Hills
Included Locations
Included Organizations
Owning Organization
Otoerm Coil
Related Ethnicities
Contested By
Related Tradition (Primary)
Inhabiting Species
Related Myths
Related Professions
Related Materials

This is such a detailed article. Dragonsgrave really sounds like a fascinating place, and I really enjoyed reading about the resources that can be harvested from the dragons' corpses.