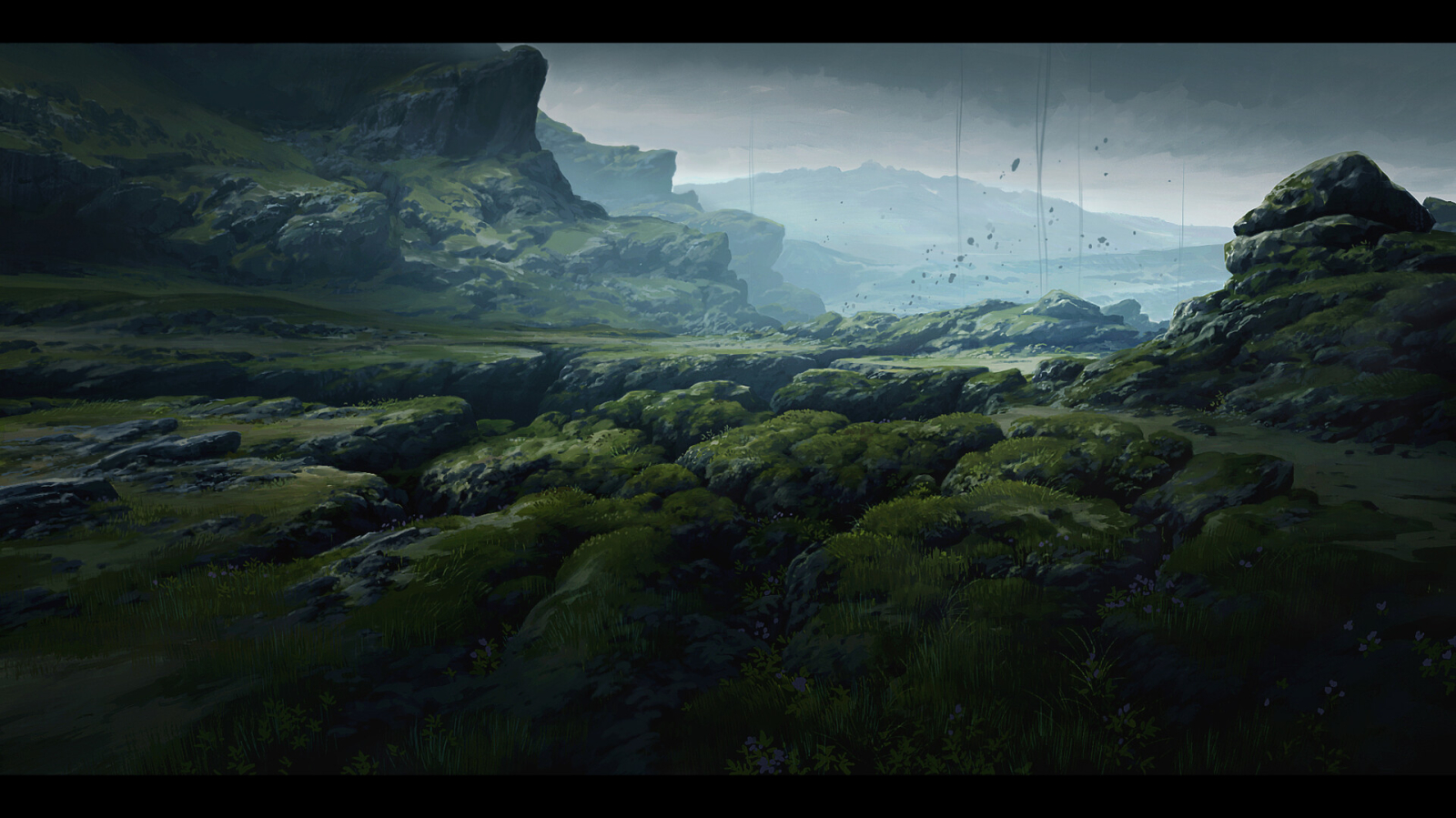 Mist is a valley hanging off the larger Valley of Man and spilling over, into the Floodlands. Its basin is wider than Mais but possesses less fertile, tillable soil. Its landscape is spotted with man-made ruins of Keanian design in the cracked basin and on the moss covered cliff sides.   The people who live here are collectively called Mist Men, but only rarely has there been a unifying entity to govern them all. Their history is that of continually warring states, sometimes with the inclusion of outside powers in one form or another, that gather into short lived nations and vanish like mist in too strong-a-wind.   Almost on the central axis of the main valley; Mist gets inundated with sprays of salt from the winds blowing in from Eeat every flood season. The valley's name is apt because during this time, so much of the flood's surface water vapour enters into the hanging valley that sounds can be distorted, which exaggerates the echo effect to both the advantage and disadvantage to its inhabitants.   Similarly, the high salt content in the air is more ideal then even the Brine Marshes in casting salt spells. This led to independent development of spells such as sync; easier casting for Ghosting and Grip; and as a place where only certain branches of spells like constructs can be feasibly cast at all.

Noisemaker:A fist-sized spider species who whistles during hunts from the web nets they launch from the orifices on their upper abdomen. And emit clicks from their bodies, with which in the echo phenomenon common within Mist amplifies into a cacophony of low mewling noise meant to confuse its prey.   They are shades of black and grey with yellow piping, red eyes and feature a second set of 8 spider legs curled beneath the primary set.   Adult noisemakers do not live long. They are preoccupied with finding a mate and suitable hosts for their eggs.   Obsidian Butterfly: Supposedly inhabiting a rocky outcrop somewhere in the lands of the Mist Men. It Is not certain if this is a creature that actually exist. Said to be predominantly dark with rippling rainbow colors when it flaps; many of its reported features are quite similar to the flocks of four winged bats that fly regularly over the floodgates to and fro.   Kirin: A hooved terrestrial creature with dragon-like features. The body is fully scaled to that of a fish and often as multicolored as one. Kiri are migratory and can live in one of two herds of related females and their offspring, or bachelor herds of unrelated adult males. However, they are gregarious and may combine into larger aggregations. This tendency to stay together, coupled with their size and gentle nature, have given the Mist an advantage unequal to the rest of the valley.   Kiri, in the time they remain in the valley, are tamable and can be made to gallop and haul on command. Until the floodwaters return to open their path south again; and they overwhelmingly desire to leave the Mist's lands. Since the beginning of the Kiris' migrations, the cultures of the Mist have evolved to nearly revere these creatures as harbingers of prosperity.   Ballers: A pint-size rodent with exaggerated hind legs it uses to both escape and kick it's predators. Mostly bipedal in statue; they hop between overlapping home ranges and live solitary lifestyles with little social interactions. They do cluster together in some feeding situations where groups of the rats exist in aggregations and colonies. Male ballers are generally more aggressive than females; and are more dominant over them. Females are more tolerant of each other than males and have more non-aggressive interactions. This is likely in part because the home ranges of females overlap less than the home ranges of males.   Ballers have small front legs, relatively large heads and tails longer than the rest of their little bodies. The coloration varies from cinnamon buff to dark gray, depending on the species. It would appear they prefer to live in areas of low rainfall and humidity, and high temperature. They can be found in the areas of varying elevation; ranging from near the level of the lower sea to about the 4500 feet mark on the Bad Step. They like to live in clay and stony soils. Or gravel and rocks, which are harder than soils preferred by some other species.

Iron: There are a higher number of open-pit mines lining both sides of the vale at the foot of the Hearts Mountain and the Zagrostone Belt.