Appointed by the Advisory Council from amongst 27 major families.   When the future ruler had been made aware of his appointment, he has one month to organize an "Inaugural or Coronation War" whereby he successful procures a number of captives to the satisfaction of his nobles. Where after, the new emperor must spend four days fasting, meditating, and paying homage the gods before he can officially take on the Great Speaker's powers.

During times of war, the Great Speaker would receive information from the various scouts, messengers, and spies, to then devise the battle plans for his army.   The tlatoani would be the most informed about any conflict and would be the primary decision maker during war. While lords of the city rise their warriors, he would also be tasked with gaining the support of allied rulers by sending gifts and emissaries from his city. Reinforcing obligations and offering concessions where appropriate.   After the fighting, the tlatoani would be informed and inform the populace of the captures and deaths of the Sang’s own warriors and would present gifts to those who returned.

He would be the high priest and military leader for his state. As the Tlatoani he would make every decision, from taxes to warfare and would most often be a descendant of a previous Great Speaker.

The single most identifiable symbol of the Great Speaker is the Feathered Crown. It can be many times the size of the wearers' head and made of any coloured feather, to any design they so like.   Each past emperor's feather crown has been different in some way or they might model one after a famous past emperor that would cause spectators to draw parallels. 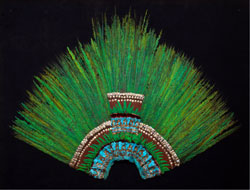 Before the reign of Uetzcayotl the Great, speakers presided over court on decorated stools and were only a head above other participates in the speaker's own hall. He wanted to elevate his view so he'd be easier to be seen by his crowds, so he commissioned a carver to fashion boulders and a slab of limestone into a raised seat for his palace. Purportedly, it was considered an ugly thing by Uetzcayotl's contemporaries; so much so, that he resorted to cover it in pelts.   This throne was since destroyed during the civil war, but it laid out the custom thrones carved of rock; six of which have become historically significant. Once a new great speaker has come into his power he chooses chairs order from previously leaders. They have the choice of:
Pyre
Conch Chair
Jade Maid
Snow Seat
Opal Crown
Marble Dais

Death of the emperor is the only grounds by which a speaker can be removed. The position is assigned for life, and most depart it uncomplicatedly. But there are a few instances of deaths so unexpected, that they have given thoughts to conspiracy and suspiciousness.

Rather than being a specific title given to a group's leader, 'speakers' were initially the small upper class who made the larger political decisions on behalf of the Sang when they were still a migratory people.   Turning into the "Great Speaker" was also a political decision. When the towns on the Colhuacan Peninsula petitioned for Sangsalgu's protection, the leadership decided to bring them under Sangsalgu's direct control, instead of appointing several new speakers. In the case of this sudden stretch of newly acquired territory; labeling the Sangs' leader as just another speaker was deemed insufficient.

The 'Speakership' evolved into the title given to any state leader within the Sang culture. Many chiefs or officials in charge of smaller settlements inside the Sang's domains, but outside the city limits are respectively referred to as just "speakers". Therefore, the idea of a "Great Speaker" is as the uniter of many city states; who rules the many.

Acamapichtli, the first Sang ruler to be given the formal title of "Great Speaker". His feathered crown was a mess of green quetzal feathers strapped together by a modest gold band.   Haldon the Spine(less) ruled during the first instigation of the "Flower War". His crown was a veritable mane of local duck, goose, swan and flamingo feathers.