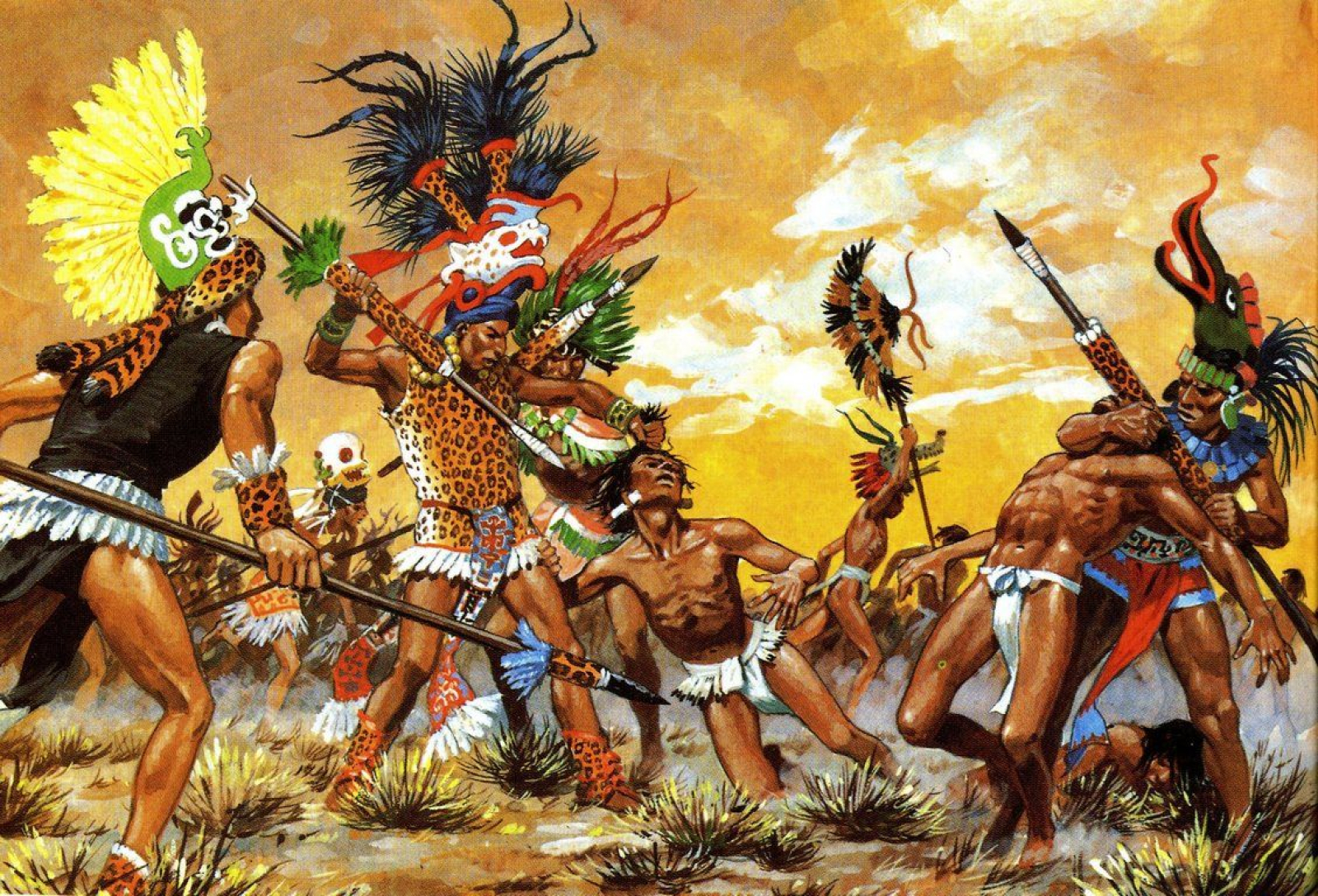 War and rain are the great equalizers of this world.   Befalling the brave and the lame alike.   Both carry the powers to dam and bless.   Rain will cause crops to sprout, refresh your days and drown your kin.   War will feed the gods, promise a tomorrow and give a meaning to life.

The Alignment stretches from the western lake shore to the peaks of the Bad Step. From the lower bounders at the shadow plain to edges of the Maze. And right in the middle, completely surrounded in this plot of land are the five garden cities. So dubbed by the Sang because it is where they can pluck the best flowers.

It began as a ritual battle fought not to conquer, but as a source for human victims to be taken back and sacrificed to the gods. In the reign of Talotitopek, ragged warriors returning from campaigning in the Mist Valley returned sour and ripe. In the garden cities, within their plot, a blight had been carried onto the farms causing famine to grip the people. Both sides, seeing that the gods needed to be appeased, agreed to a tournament of strength whereby duelers pair off and the defeated is carted away by the victor. In this way, all cities were able to make sacrifices to their gods and rebound.   For a few times after, though, Sangsalgu endeavored to push for more. The Sangs are warriors; conquerors with little else to conquer. At the time, the cavern cities had not entered into the Sang alliance network, and even the minor settlements on the Bad Step's lowly slops were, and still are, too notorious to assault.   Also, the cultural memories of the defeat in the Cocao War "left a scar that needs a balm" said Ixiopocle, Incarnate during the later reign of Haldon. And so, in the vain of extracting a deserving toll, participants gathered near a border town and devastated the outbound territories controlled by Moor to provoke a response. For years later, the flower war became as it is now known.

There are a few wars of note that have been highly controversial because they were not directed at the Plot. Other than tradition, what differentiates flower wars from coronation wars is that the intent of a coronation war is to conquer. But there have been emperors who chose to forgo the wisdom of their captains and generals and sought to augment their available forces for personal campaigns. To the woe of many.   Flowery campaigns that end in the seizure of some settlement in the Garden are usually considered to have gone over the intended purpose, given what is required in a conquest. But such times can be argued to be accidental.   What is considerably less so, is when a year's flower war is scheduled to take place in a different theater. A rare circumstance which should trouble the raw graduates since most would be from common families without practical experience, with little access to suitable gear and small chance in pilfering spoils. Such 'conflicts' have included:

Ideally, the actual number of participates would be quite small in comparison to the entirety of Sangsalgu's army; to combat their equally sized rivals, as dictated by tradition. However, though it is known that other cities do not always want to participate, it would be on the whole, more preferable than true war. Regardless, there have been many plots, deceptions and ambushes made on the fresh participates that required a professional response. Therefore, steps are made to secure the ground and deter excess actions.   It is rare for a targeted city to not send out some number fighters, else wise the flower war might devolve into bands of plunderers or besiegers of a fortified settlement. In such instances, professional commanders take overall charge, delegate to their captains who then direct the flower war participants to proper conducts in warfare.

These are rare notions in battles. Yet they have happened four times in the history of the flower wars: Unwin, Huetula, Ixquian and Cholula.   While such an unlikely event is bound to occur is due in large part to the Sang not wanting to actually destroy their enemies on the field. Many opportunities are usually given to their coil opponents to escape to live to fight for the next war. Therefore, super sieges tend to occur when there is a breakdown of sang discipline combined with an over commitment of resources and a high rise in bloodlust.   Even rarer still, is when there is an unusually high amount of additional support on the side of the coil: sneaking additional food and weapons through the lines, harassing logistics convoys and amassing troops at several distant points behind the contravallation operational range.

The first stage in forming a super siege is circumvallation; troops dig ditches and build walls and watch towers in huge circles around the town. The troops would then watch the enemy to make sure they don't try to fight their way out.   On average, circumvallation spans 11 miles and contains the greater territory including the besieged and plenty open ground.

The second stage is contravallation. The contravallation was just like the circumvallation, but instead of facing the town, allied troops face the opposite direction to watch for armies that came to relieve the besieged.   It is the establishment of a military base that generally circles 13 miles and takes on a torus shape where the besieging army rests, drills and generally mans its positions for defensive and offensive operations.

Unlike with a true war, there are certain restrictions with what type of weapon is allowed. Clubs, bows, spears, and darts are permitted; as are round feather shields and some leather helmets. Maces and snake swords are not.   Use of armor is also fairly restricted: participates must do without full feather gear or salt suits. Sang's combatants wear quilted cotton tunics soaked in salt water over the normal loincloth to offer some resistance to enemy attacks.   Coil fighters follow much the same traditional dress, but this is less of choice than lack of access to the more advance options.

Every year, thousands of graduates from Sang schools would travel to a place announced as the starting point by the regular speakers of a town or burg within Sangsalgu's influence. Many previous year participants also return year after year as a means of honing their skill and building camaraderie with other veterans and surveying the new bodies they would be commanding in the future. The primary purpose is, of course, to specifically capture captives; but it is also the where most started collecting the feathers (wherever found) to take back to the amanteca or women weavers to begin weaving their personal feather amour.

From the point of view of the citizens of the Otoerm Coil, it is a time of sorrowful harassment by their tormentors. Normally, they lose more men than they capture, which overtime has led to a steady bleeding of any of their cities' population.

It is a slow death of a people
— armored scorpion

Conversely, there exist a minority of zealous partisans who commit to take part fully on the alignment's terms. These sort train since boyhood and participate year after year, excusing less able recruits and gaining fearsome reputations and prestigious social standing in the process.

The established political order who make the decisions as to when and where to mobilize the state army for direct conflict with the encroaching Alignment army. Due to the shrinking resources available, it is rare for the coil to attack, unless victory can be guaranteed.

Depending on where the ceremonial battlefield is announced to be, there is usually some official and unofficial responses made by citizens of the coil to sabotage, ambush or otherwise prevent the march of warriors into their territory. Annoyances such as these continued from the march in, through the proceedings, to the march out of the battle ground.

This difference in the perception of the flower war has sprung many plots to deter or ambush participants. In the early times, when the flowery duels were of a desperate but mutually agreed-to event, there was no cause for dishonorable acts or the responding security measures.   Alas, when the wars became an infliction forced upon the Coil, allied city states of many compositions would marshal their armies with professional confidence and manure them with purposeful intent. Such direction during a flower war is antithetical to its intent, so much the same was never given to Sang recruits.   Overtime, an escort system overseen by various military societies was employed to deliver participants to the designated ceremonial grounds. The very elite of the military class would be adorned in their jaguar skins, salt suits and feather armours; formed into real battle lines and ready act as a counter to any surprise attacks by the opposition. This was later countered by the gardeners staying within fortified positions (forts, embankments, settlements, cities) which in turn required greater commitments from professional forces, and ironically violating the rules of war themselves; mostly through when deploying siege engines.

The alignment's hold on the coil has been long-lasting and Sangsalgu knows how to break their nobility. Their history is littered with the initial obligatory defense, followed with political abandonment. This coupled with the clear designation of the whole territory as a target, has led to numerous partisan groups constantly forming and harassing the rear and logistics efforts to ever increasingly effective rates.   Observers (either professionals assigned to task or volunteers from their respective military societies) monitor the progress and skills of the Sang graduates to be reported back and considered for acceptance into one of the many military orders.   During the Years of Flowers; the Great Speaker, himself, leads the march into the garden territories and commands as he would in true wars. He brings with him, the rare exceptions, professional soldiers to actively participate in the duels to attempt to dislodge the professional career warriors on the otoerm side.

The day of engagement generally begins on the twentieth day of the fourth month every year; with extra devotions made every nine years in honor to the 'Year of Flowers' according to the sacred calendar. The weeks before and after are given over to an atmosphere of merry making and festive games, meant to prepare the attendees for the contests and tend to their jubilance when they return. 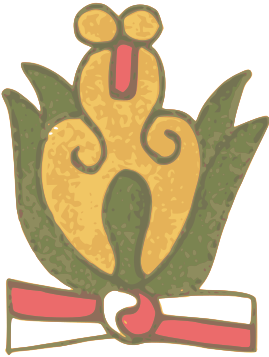