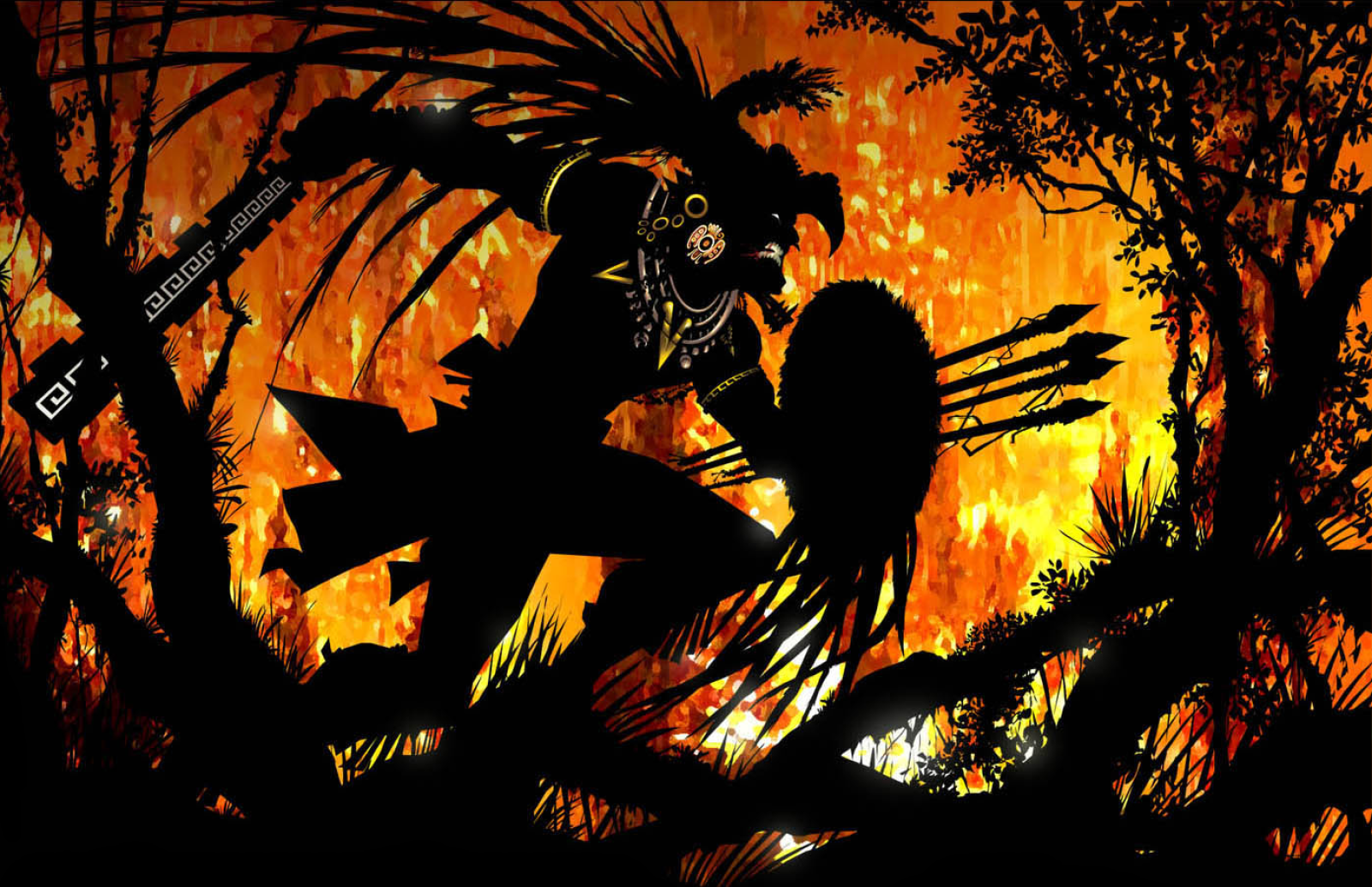 Yaomachtia is a fighting style using non-lethal maneuvers and techniques to disable opponents.

The tall posture is a nearly free-standing pose with little bending at the knees meant to intimidate the opponent with their size.

The crouched posture has many variations for easier movement. It lowers the combatant's center of gravity in preparation for an attack.

The rear posture is a common stance where one leg is flung way back with the other front leg baring most of the body's weight.   This stance also offers a smaller target to attack because how much more it bends the knees than the other techniques.

There are three main positions on which to hold the maquahuitl:

The choke hold involves holding the hilt as close to the obsidian blades as possible.

The middle hold is the most common grip. The hilt is held at the midpoint.

The long hold is held the furthest from the blades to extend the warrior's reach and momentum.

The different grips describe the pressures the finger and palm put onto weapons. The grips are used in tandem with the holds.

The strong grip, commonly called the "hammer grip", is simply the even and comfortable strength people would normally hold onto their weapon.

The weak grip is where the pinky and ring finger grip the hilt tightly; and the thumb, middle and index fingers loosely hold onto the sword to make it easier to change between holds.   This grip typically allows for faster sneak swings.

The leverage grip has the thumb, index and middle fingers holding on tight while the other are loose to make changing between holds easier.   Because of the natural leverage, this grip allows for straight forward fast and strong swings when the hand is pulled into a fist.

This technique utilizes the "Rear Leg" stance that the fighter takes before sprinting towards the enemy and initiating combat.

This technique rotates around the positioning of the thumb for ease of adjusting the sword position.
Wrapped Thumb is affixing the grip onto the hold.
Thumb Up is resting the thumb parallel to the hilt so it is easier to reposition or twirl the weapon.

This tactic involves possess many combinations but the most used ones start with the weak grip and trying a combination of succeeding grips to disorient the opponent or as a means of getting into a better position.

This is a technique where the warrior changes from the "choke hold" to a "long hold" to extend a their measure mid fight.   It is a common tactic taught to recruits who would normally hold the end of the hilt pointing towards their opponent and the blade point away from them and over their shoulder.   While all the enemy can see the end of the hilt, the recruit would subtlety slide from the choke hold to the long hold.

The standard armament of the elite cadres; composed of a wooden sword with sharp obsidian blades embedded into groves that run the length of the wooden holder and held in place by a plant resin adhesive. Maquahuitls can be used to cut, but for use with the Yaotl style, it is more accustomed as a bludgeoning weapon:

The very tip of the maquahuitl is rounded to jab at the enemy's head to knock them out.

The flat sides of the maquahuitl can break bones when swung in a wide arc.   The amount of room needed to perform this type of sweep would lead to elite warriors squaring off in one-on-one duels, instead of fighting in groups.

While the most dangerous part of the maquahuitl, being struck edgewise is not necessarily a debilitating blow.   Though the target is more likely to bleed out from such wounds.

Dragon Feathers have been plucked from dragons as the best protection the valley provides. They are incredibly resilient, flexible and resistant to cutting.   It is for this reason that a way of fighting would eventually develop into Yaomachtia. As opponents stood little chance of hacking their way through feather shields and feather armour; they eventually realized that wearers were still susceptible to piercing and bludgeoning attacks.

Not-as-loved alternatives to the maquahuitl as they could disable opponents from a distance. These weapons, made from fibers, carry less glory than fighting close quarters. Although, several veterans in many military orders can be seen using them quiet deftly.

The point of the Flower Wars is to bring back hostages to a temple to be sacrificed. Yaomachtia is a fighting style that evolved to specifically address this need.

To kill your enemy on the battlefield is a sign of great clumsiness.

A particular double handed maneuver that brings a heavy downward force with first contact being made with the maquahuitl's lower blades resulting in a swift sawing effect that can delimb or decapitate a person.   This leaves an ugly mess of a body which highlights a lack of control.

Directing an edgewise swipe to an opponent's unprotect belly cause prolonged suffering on the target as blood, bile and waste intermix.   This show that a warrior lacks self control and discipline.

Competition Homepage
In response to the prompt I want to become a master swordsman in your world. What unique methods of training do I use?