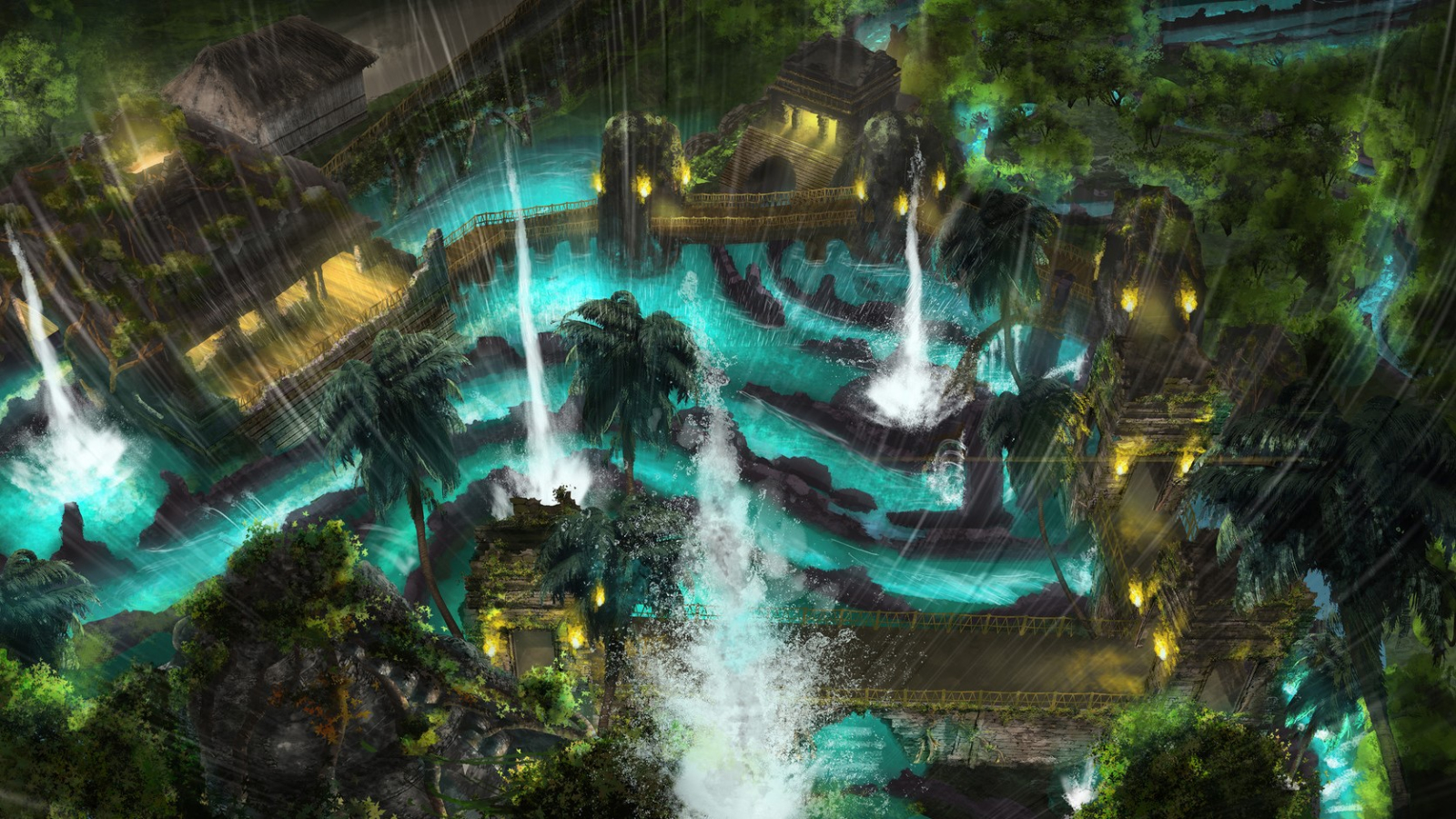 Mixed lake is an artificial lake made up of a network of canals, aqueducts, sewers, embankments; and even chinampas and smaller isolated reservoirs; separated from the natural Lake Coco by the Dike of Cranotuilloil.

Thought of accurately as a water maze, mixed lake's infrastructure consists of multiple layers and levels of square tubes running over and under the city.

There have been a few instances where water mice have been sucked in by the changing currents through the ducts connecting to various wells. The most powerful is the well that the great temple was built over. The wardens do often find the bodies of the drowned child slaves in random passages and rooms within the Moon Stone. Rarer; a mouse might find an air-pocket and not be carried away until the water levels lower.

Sangsalgu was built in a lake that is partially salty, but peppered with several more fresh water springs than other sections of Lake Coco. Most of these springs lie along the western lake shores, but there are also a few scattered under the lake bed further out that pool pockets of drinkable water surrounded by salty water.

A watershed of six rivers; five of which flow into a concentrated southerly spot of the lake shore.

A slim waterfall that delivers diluted portions of pink salt from Salt Place into a quartered off section of the lake.

Artificially made to reverse its course away from the direction of Ocumtit so as to carry waste away.

Many islands and inlets rise naturally above Mixed Lake due to its shallower bed compared to the rest of Lake Coco.

The senior engineer responsible for overseeing the smooth operation of the city's water supply and infrastructure.

Small children sold to the state and tasked with inspecting, cleaning and reporting the happenings-on of the interior of the canals, channels, ducts and sewers of mixed lake.

Ahuauhtle: Insect eggs naturally deposited in great quantities throughout the year on the surfaces of aquatic vegetation. The harvested eggs are ground to a paste and then either cooked and eaten in tamale or, more commonly, mixed with other foods.   Axayacatl: A small, lacustrine fly, with a fishy taste, collected with a net mounted on a wooden frame fastened to a long handle and pushed by a man walking through shallow water where the insects live and breed.   Fish: Fresh water fish such as Carp, Big Head, Tilapia, Mud Carp, Edible Goldfish, Wild Carp are netted, speared, and hooked from canoes or platforms made of reeds or twine weirs; bone hooks on set lines. The captured fish are butchered and filleted with obsidian blades, knives and scrapers.   Algae: In some parts along the southern shores, nets skim the water surface, both afoot and from canoes year-round collecting the algae to be sun-dried on prepared surfaces on the lakeshore, then formed into thin loaves or cakes, sometimes wrapped in leaves.

With the final collapse of the tinges' wights during the Wight War, thousands of human bodies were carried through the currents to an open and then-under regulated portion of the lake. Cleanup volunteers and reconstruction crews also purposefully dumped corpses they found in their way into an area of mixed lake, its citizens would call the Wallows.

After the axe wave, which saw the mass introduction of Mist copper currency and the collapse of Ocumtit's pre-Triple Alignment economy, a ton of the crescent shaped pieces were thrown into mixed lake. Swimmers, divers and shore-goers often find old, rusted pieces along the lake bed to melt and reforge into useful tools.

In the depths of the foundations of the Moon Stone is a bubbling spring that pushes foams of water through the narrow halls and obscure cracks. This wellspring is one of the few fresh water sources that exist as apart of the Mixed Lake. Jailers and guards take it upon themselves to keep track of the water levels that rise and sink every day; and report to the Water Warden who would then open extra reservoirs, spill ways and aqueduct reroutes.   Those who regularly traverse the dark halls have notice that they can only walk around the circumference of the base. Of course, since it is mostly filled in, then it makes sense. What unnerves the denizens are the irregular quakes that are focused on the Moon Stone.

An isolated saltwater reservoir in the middle south western part of Mixed Lake under special responsibility of Coltonco's islanders. The wallows are heavily polluted by people disposing of their garbage. But this pales in comparison to the number of decomposing bodies of wights from the battle that followed the channels to the reservoir bottom. Pieces of human gunk persistently float to the surface which gives an unhealthy green and red tinge.

The channels, pipes, canals and reservoir walls are made from a specialty plaster, secretly designed to withstand constant exposure to salty conditions and stress. This was critical during construction as many fresh and salt water lines pass next each other, which required architects and engineers to put as many safeguards as possible to minimize cross contamination.

A circular limestone base that forms the foundation to the tiers above it. Standing seven stories above ground; it is extraly braced by columns and wedges of basalt and granite against an ever-growing mound of black sand, porous rock and sharp gravel. During the construction phase; this rising island pushed up and out, helping to aggrandize the Moon Base by necessity and by itself become a pricy project.   There is little room left for an interior; except for long, winding and narrowing passages, for both men and water, and maze through restricted treasure rooms and hidden prison cells. It stands 200 feet and partly submerged between three stony islands that help in stabilizing the base for the additional tiers.

Built of stone with an undulating facade, it was initially an above ground sewer that helped in fertilizing the chinampas. This wall gradually and unevenly began to sink in the marsh till the citizens just thought of it as another raised causeway.

Though it was initially intended to be a free-standing structure with four sided arched walls braced against the nearby islands over a boiling freshwater spring. The shifting landmass forced adoption of the talud-tablero method instead, which left little room for much of an interior than was planned.

A stone sewer line that circled three sides of the Sacred Precinct and left open to the lakeward facing side. City planners also thought it a last resort to include hidden gates that might flood conquered parts of the city in waste; should an attacker pushed the Sang so far.

Co-located besides the four main streets and three main causeways, to deliver the city’s fresh water from distant springs via paired ducts lined with terracotta bricks. This allowed for continuous water flow, as maintenance can be made on one pipe while the other carries on.

The canals act like water roads that allow people to easily travel around the large city in boats. There are two types of canals that carry freshwater and saltwater.
Freshwater Canals
The freshwater canals reaches all parts of the city to deliver drinking water to the people and help quick transportation within. They also connect to chinampas for farming and to smaller reservoirs separated from the larger mixed lake to store it for future use.   These include reservoirs Moyo, Tearless and the Underwells.
Saltwater Canals
The saltwater canals are not as sophisticated as the freshwater ones, but they also circulate through the city as part of its saltwater management. Originally, warder wardens and water mice only had to contend with upholding freshwater canals as those were all there were.   But the cross-contamination after the green battle required a huge revision and reclassification of its layout to maintain adequate water delivery.

The channels are either dedicated to carrying sewage or double as emergency waterways that allow for additional flow paths.

During the long battle, the witches used the dikes as roads to arrive quicker to the fighting happening in the Moyotlan and Cuepopan districts. Some wights and covens got off half way to traverse the reservoir and open new fronts in different districts as part of their flanking maneuvers. By the end, the lake's infrastructure was heavily damaged requiring the rerouting and abandonment of half of Sangsalgu Proper's freshwater canals to saltwater.

The longest, running some 70,000 feet north-south and creating Mixed Lake; it is composed of three lays of grass-tree trucks on either side and barriers of raised earth in-between.   This dike is three wagons wide and doubles as a short-cut across the lake between the coastal district for a select few.

The sturdiest, connecting with the northern end of the grass path towards the mainland and further separating the Mixed Lake from Lake Lightning in the north-east.

The ricketiest, joining the holdout on Tenula with a clear path to the rest of Sangsalgu through the southern districts.   Not as well maintained as others; it is the most profitable since it shortens the distance merchants need to travel. So much so that complaints of the traffic loads are undermining its usefulness to separate out the salty waters.