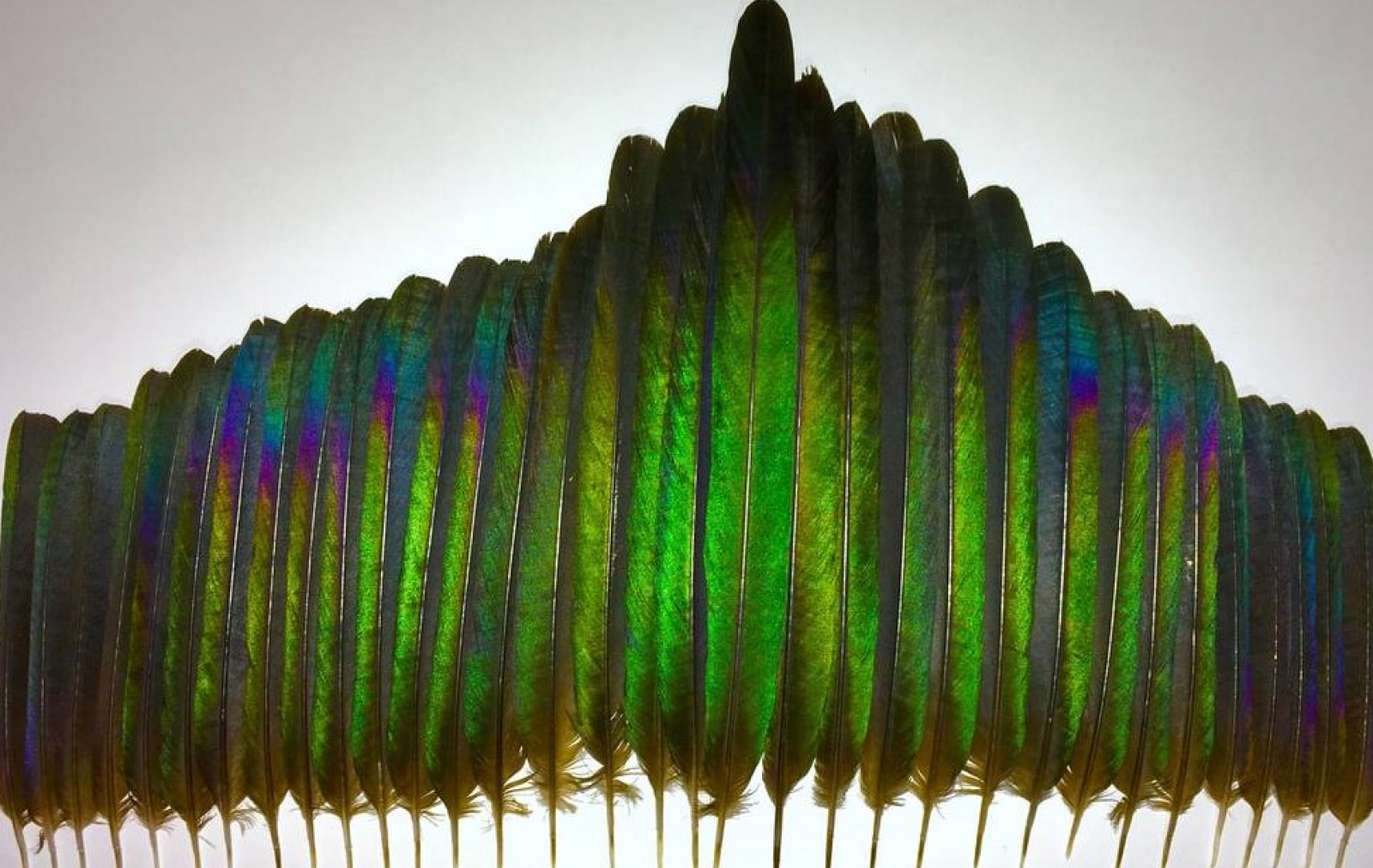 Quetzals are strikingly coloured birds found in forests and humid highlands, that favour the border areas around the whole of the valley of man.   Generally, quetzals have iridescent green or golden-green wing covering the back, chest and head; with a red belly. They are strongly sexually dimorphic, with female plumage tending to possess more earthy colours. Therefore, the feathers being most desired are the two tail feathers of the males of six species of the bird. Even with their famously bright plumage, they can be hard to see in their naturally wooded habitats, making them hard to catch. They also do not last long in captivity and certain variants' feathers are more susceptible to degrading, due to tough handling, than others.   Quetzals, or quetzalli, are also specifically the birds' feathers as being a rare and valuable standard by which merchants, cities and states fall back on when no alternative trade can be reached.

Birds are sacrificed alongside humans during high religious ceremonies as their feathers are seen as links to various deities. It is partly for this reason that feathers, particularly quetzal feathers, are so valuable. Internally, there is no fixed conversion rate among the types of quetzal feathers. But it is culturally agreed that greenish, long feathers are of higher value; and the denomination is determined among individual traders on a case-by-case basis.

Gods and kings frequently wear magnificent feathers as part of elite clothing for dance and war. In the valley, quetzal feathers are notable for appearing blue from some angles and green at others, often with a shimmering golden overlay. Every male quetzal bird has just two of these long, flexible tail feathers (called coverts when still attached), and these elusively solitary birds prefer forested mountains far from the basin. Traders would many times trade for these feathers with catchers who lived near wild quetzals.   Smaller feathers from quetzal wings echo the color scheme, but those are not as prized due to how much smaller and common they are. This has not stopped some from trying to pass off alternative feathers as genuine quetzalli.

There have been many private and public enterprises to breed quetzals for their tail feathers. However, quetzal birds need specific environments in order to survive. Add to that, that the specific male tail feathers used as currency grow out and molt once a year. Therefore, each bird would offer limited return and there is a greater chance that the quetzal would die before even the growing period.

Deceitfully, there are amantecas of former amantecas who work partly or wholly in counterfeiting quetzal feathers. These "Treaters of feathers" glue and dye old, worn and damaged feathers to resemble the real articles to trade to nobles who could realistically afford them.

In addition to the quetzal, especially precious feathers come from brightly-colored tropical birds such as the bright blue cotinga, dark red of the roseate spoonbill, brown feathers from the squirrel cuckoo, emerald toucanet, gold appliqués, macaw, parrot, hummingbird, oropendula and troupial. However, more common feathers of domesticated ducks and turkeys are also traded for, but they are as quickly taken out of circulation as material for the arts.   It is the same for quetzals, as it is for cocao beans, in that feathers are used as a part of permanent decorations. Feathers are incorporated into clothing and accessories, including headdresses, capes, loincloths, armbands, backracks, shields, banners, and fans. However, while this may be the fate of many lesser bird feathers, it is much rarer for someone, even a rich man, to want to use quetzals in such a way (as to make themselves poorer). Yet, ennobles would collect and show off quetzal works as a sign of prestige status among their own peers.