The most important facilities of the coil are the ancient construction projects during the alliance age that further healthy living and defend the state.

The channels are man-made underground waterways, cut into the bedrock, that carry water filtered through limestone from sources atop the Step to gardener cities and serviced through deep dug wells.

Piles of dirt, seeds, pieces of pottery and general wastes from long ago have morphed some parts of the plains of dragonsgrave to grow long, round-top embankments 30 feet high and trenches in-between, 25 feet deep.

There have been many military alliances seen throughout the grave's history. Otoerm Coil has had many spiritual predecessors; too many to count. But those have always been comparatively small and limited; and had been formed to contend with other garden cities.

Ebenezer, which would later contribute its name to the coil, was experiencing a golden age by its rich colonies, military expansions and a prestigious generation of leaders. It had eventually grown to border Ocumtit which led to periodic conflicts that ended in deadlock. Being of comparable strength, both sides set aside their enmity to cooperate for economic, and later military gain. Shanzee was coerced into it by Ebenezer and Ocumtit for their agricultural land; followed by Cuauhnāhuac asking to peacefully join this powerful alliance.

A civil war between the four quadrants of the Eben Coil and their separate capitals that ended in the secession of Cuauhnāhuac, the scouring of Shanzee, degraded Ocumtit's reputation and beheaded the leadership of Ebenezer. Though Eben technically survived the war, it came out in such a ruined state that it lost it ability to project power; even losing the Bad Slopes to the emerging Long Step power of the Bad Step.

The Eben alliance was a collapsing coalition that was re-energized in responding to a common treat in the form of the Sang. It was the last hurrah of the preeminent border state that successfully fended them off. The victory inspired other alliances and city states to coalesce and decisively drive them out.   Poised to defeat them once and for all after a particularly fatal sang misstep, torrential rains began to fall that carried the Matlazahuatl which devastated the populations in dragonsgrave and forced the combined armies to disband. After this, Eben effectively ceased to exist.   The Sang's successful resurgence after the plague ran its course led to them overextending themselves which resulted in their total defeat. Due in large part to the timely intervention of the Mountain and River Toiks that discredited the Sang as a further treat; and led to the formation of new Coils and further intervention of outsides forces.

A shorn and mostly bumpy plain of pale grass stretching from the lower boundaries of the Range in the north to the stalk covered Mais in the south; and from the Step's base in the east to the great lakes' eastern shores.

The shores of Mere and Coco are so heavily logged, farmed, and urbanized that they were generally the most productive parts of the coil.

The connective region between the length of Bad Step and Dragonsgrave that is largely inhabited by step folk. It is of a higher elevation and prone to earthquakes which causes rock rubble to fall and form into some of the hills below.

These are the cities' garrison permanently stationed inside the Dragon Walls of those who can maintain one.

All four of the component capitals of Eben Coil are capable of drawing from their own citizenry to field a large army independent from Ebenezer.

The other, pitch black; and forever hooded in shadows. It is said to be found wherever one finds the orbs glowing softly in the night. These are the gods' eyes. 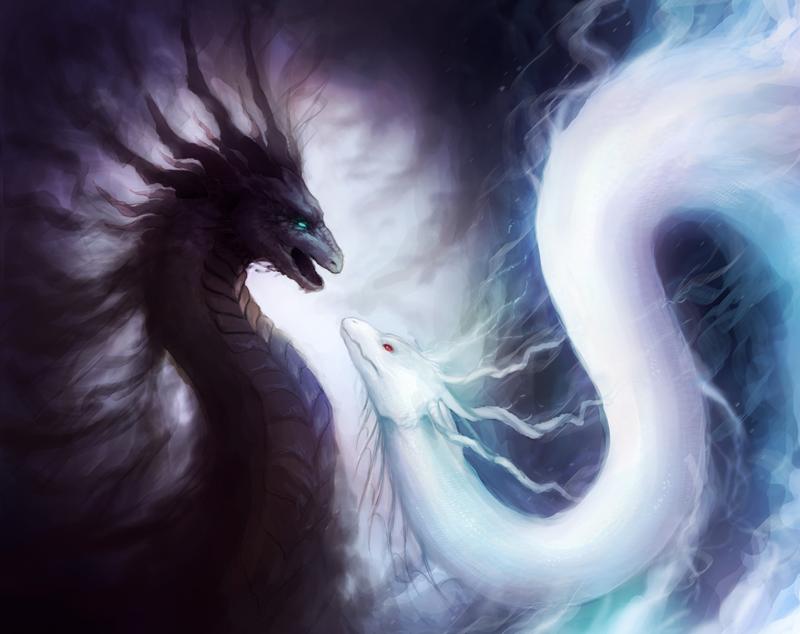 Dragons of Yin and Yang by JoJoesArt

Worship of a divine group of corn siblings: the sons of the goddess Centeōtl and the god Cinteōtl.

Worship of Tezcatlipoca's Night Drinker associated with force, work and labour in vegetation, and offers "Ruler of the East".

Worship of a motley group of rain, weather and mountain gods.