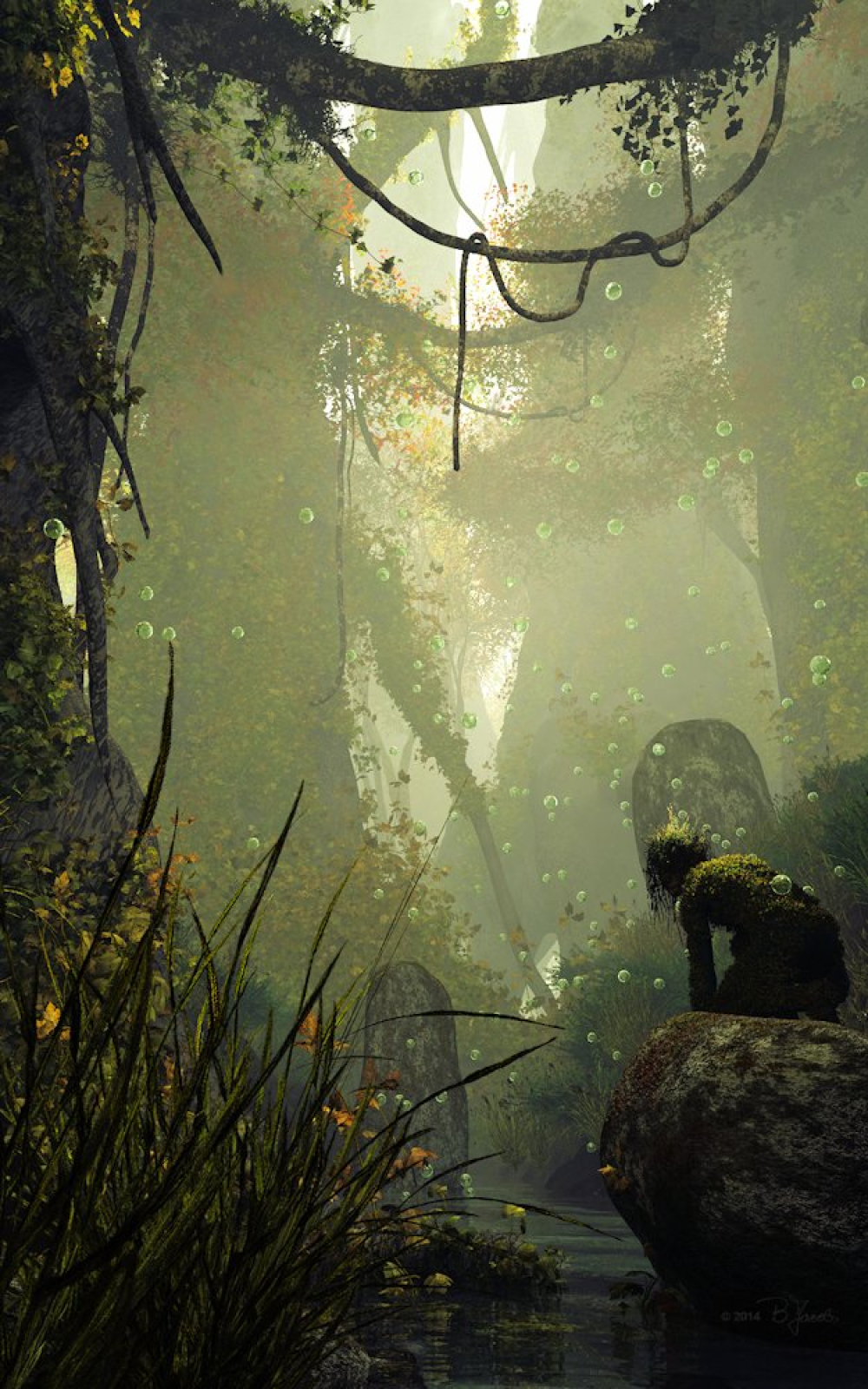 It is the source of all the salt rivers that flow through the western side of the valley and into the largest lake in the valley basin. And as such, is literally the source of those settlements' powers. The Brine Marshes rank among the most important magic enabling places yet known.   It is said that:

the soil here is more saturated with salt than the seas.

It is unknown just how the soil became such. There are many theories as to how, and all of them are ridiculous. The only one that holds the barest likelihood is that the salt was carried on the winds from the pearl sea and been deposited on the land over long stretches of time. This has particular support because many such salt storms also carry a large number of sea life. Some of which can just barely survive the fall into the brackish waters; or fall dead onto the ground for others to feed on. There are not much else that is safely edible in the Brine Marches.   The marches continue west until it sharply falls onto the rugged rocks in the Pearl Sea. The northern borders in the marsh fuses into the Northern Range where fog and rain water invades monthly and breaks regularly on the shores of the brine pools.

Blood Wood: A black and red stained tree with reddish sap almost constantly bleeding through the cracks and crevices in its bark. It grows healthily in the brine and is the source of the bark salt. In-the-place of leaves, blood woods grow porous and unappetizing beans on its branches, the weight of which drags the tree branches downwards.   Many organisms in the ecology of this area are heavily dependent on this tree filtering the brine. Other than humans peeling off its bark, the blood wood has no natural predators. The sap seeping through is so acidic, it supposedly burns the tree itself as it migrates out and hardens into the tree's bark, like a scab.   The "Blood Woods" is also the name given to the forestry areas in the Marches; which as one can discern, composes mostly of Blood Wood.   Black Rain Frog: A species of frogs only found on the western slopes of the marsh fringes. Unlike other frogs, black rains keep their tadpole tails as adults that secretes a sticky slime that is collected as a resin. The frog uses its dexterous tail to lather the tunnel walls behind it as it burrows beneath the earth. It is often found nesting within the root system of Blood Woods.   Grey Worms: A dark skinned and tiny worm that filters through the brine soil. They are the hard working cousin to the spice worm that secretes excessive amounts of water-heavy slime to lubricate its surrounding as part of its locomotion.   Both animals and humans seek them for as a source of water and are as appetizing as you might expect.   Moonlight Moth: Considered the antithesis to the obsidian butterfly, which may or may not exist. The Moonlight moth is a wondrous, luminous sight; especially in the moonlight.   Blue Mushrooms: Also called the "Milk Cap", the flesh is pallid to bluish in color, and turns greenish when exposed to air. It has a mild to slightly acidic taste, but others say it has a slightly bitter or peppery taste with a coarse, grainy texture.   The latex exuded from injured tissue is indigo blue, and stains the wounded tissue green. If one can gather enough, the green latex can substitute for the regular rubber trees.   Jolt: A largely bulbous plant that only grows in the Brine Mashes in large clusters; near the Mashes' salt water pools or on particularly salt ground.   The plant gets is name from the jotting sensation one gets when walking on or by patches of jolts.

Blood Wood: An exotic wood that only grows in the salty conditions in the marshes. It has since gotten even rarer due to the invasion and competition of Grass Trees, another plant that can grow under salty conditions. Blood Wood gives extra flavor to meats that are cooked over its blood-fed fire.   Resin and Leather: Extractants from the shrooms and frogs on the marshy floor are a great source or wealth and trade for the marsh people. Both are plentily available during the witches' roaming though the any random area. First the wet resign are stimulated out of kept or wild organism and stored in a jar, probably with purple salt, as a preservative and the rest of the thing is pulled and beaten into leather. They may further shape the material into some tertiary product or trade it as is.   Marine Products: Due to the seasonal salt storms; schools of fish, clams and shellfish are swept from the depths of the ocean to rain and die on the fall to the marsh. Most are picked up off the marshy floor as a part of the Tinge diet. But some creatures are robust enough, or lucky enough, to survive the impact and later spawn small, unique ecological communities in the salty pools. Sea shells and coral are some other materials that are delivered yearly into the Brine Marsh that are collected by inhabitants for building covens and traded to outsiders to be made into quicklime for plastering walls.

Where the marshes fall into the Floodlands, is a curious formation of interlocking basalt columns that slowly descends into the area like natural steps. The columns also depict engravings of individuals as part of an old culture's funeral rites, which is generally avoided in respect for the dead.

The sharp drop off from the Marshes into the pearl sea where many pearl banks rest.