A coven is the mobile family home of the Tinged people. Ruled through the grandmother figure, covens resemble a multi-storied wood and plaster building settled atop a platform of long bird legs source together from materials growing in the marsh.

Unbidden, a blood wood tree moves to its on whims. The result of a repetitive, pulsing reaction between the bloody sap inside the tree and the salty bark that covers it outside. This effect is understood and appropriated into the the coven's legs to the tinges' designs; with the matriarch controlling the direction and speed of the coven by manipulating the bark salt to shift its concentrations within the legs.

When walking on stilted legs, one leg swings forward while the other leg’s foot stays planted on the ground. When walking at natural speed, the swinging leg uses contracting forces (via bark salt) to move forward and immediately relaxes, allowing the force of gravity to move it to the ground. Simultaneously, the planted leg moves forward with largely passive rotation at the hip (thistles area). The planted leg only needs to stay straight and the swinging leg’s joint only slightly bends to allow it to pass underneath the body.

The favourite salt spell utilized by the coven's witches to attack from a distance.

The design of a standard coven is not conducive to heavy armor. The best they can have is lime enforced walls and padded legs, which can hinder movement. Unencumbered, a witch's home can reach great speeds and is dexterous enough for the claw to hold onto cliff sides.

The roofs are fitted with spires wherever they can find space, so they look more imposing to outsiders and rival covens. To discourage thieves and children from jumping onto the roof. But mostly to spare the fish that fall during storms and make collecting them easier.

At the alter rests the literal brain of a coven. The mind of the previous matriarch follows the instruction of the matriarch who replaced her in death. Through secret sorcery, the living witch can drive her family's home through the marsh, outcroppings and up steep hills.

Between the home and the coven's legs sections are the thorny twigs bundled together capable of measuring the heat, pressure and humidity of the environment. Via her years of experience while still alive, the brain communicates this information to the matriarch. This way, the residence can detect approaching salt storms and hunker down.

These are fashioned using similar techniques that made the main limbs. Manipulators are usually hidden away in the bush of thistles under the house and emerge to interact with the environment or fend off intruders climbing a coven's signature long legs. 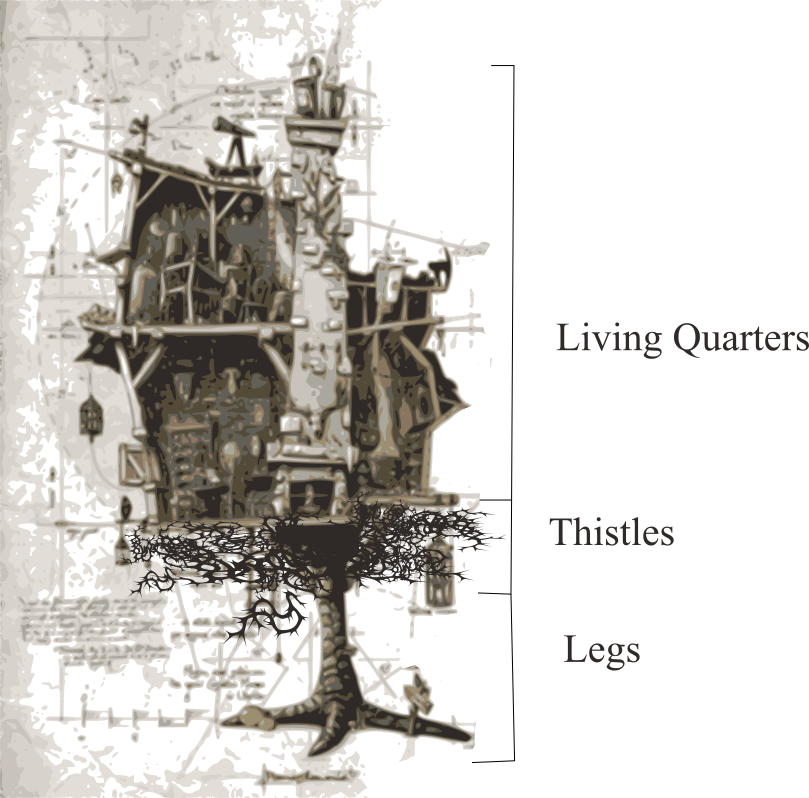