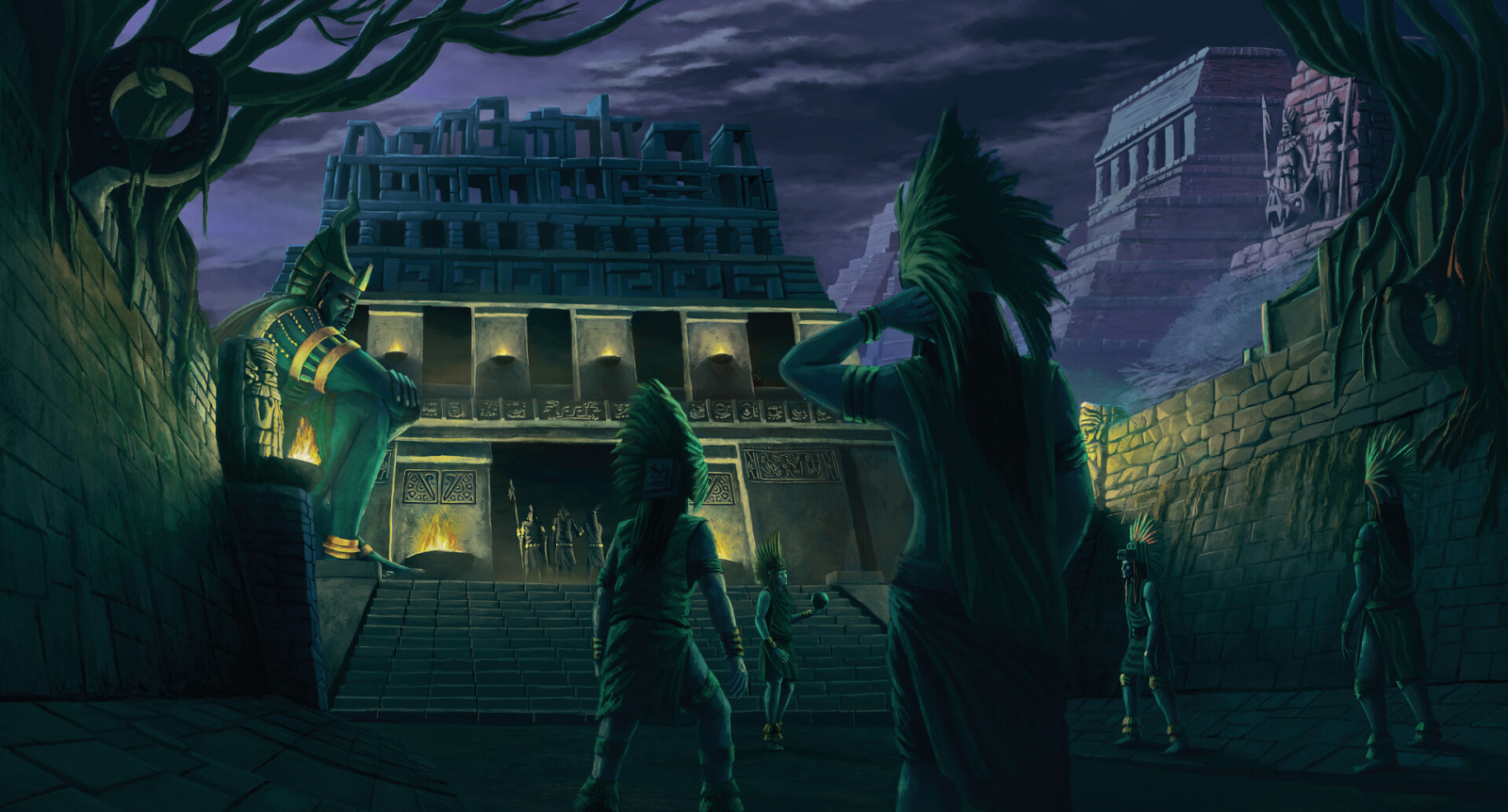 There are many chapters to quinametli, each headquartered in the major sinks of Long Step and usually accompanying the offices inside the many admin buildings.

The head of the quinametzin religion- just as the Quetzalcoatl Tlamacazqui in the sang's bureaucracy- who spends year round in Hajjinis. They are so called after the mutations of their Tuskin ancestors and are represented with head pieces that fit skulls onto the sides of the priest's head when worn.

The quinametzin's representatives who lived in the Sinks exclusively; one or two per settlement. They are capable of making independent decisions and without needing to report every goings-on to the three-headed one. They are so called after the mutations of their Tuskin ancestors and are represented with a talisman or literal human skull the wear at their waist.

Travelling priests who preach to people in distant lands on either side of the Bad Step. They are more known for conducting public sermons to small crowds in the west and being far less adorned than their higher ranked priests. In the east, they attend to less religious and more material needs in the running of far flung camps.

'Old' is the single word that comes to mind when one hears about priests, mystic men and hiking preachers casting illustrations about the past. And in the time before the white case, it was so. Priestly nobles decried the loss of tradition and their influence in their Caverns; but they were largely ignored in the face of a growing sense of common Step identity.
— Folklorist

These men have refound their power in the run down Sinks. Expanding to other Sinks and sometimes wielding greater influence than the 'Trusts'. Those in authority view themselves as the last line of a traditional mindset dedicated to the step's forefathers.

Quinametzin is veneration of the dead tuskin giants and are based on love and respect for the deceased.   It is related to the belief that the dead have a continued existence, and possess the ability to continue to influence the fortune of their living descendants.

The original purpose of the quinametli movement was to preserve quinametzin in face of the systematic dismantling of its privileges. When that failed, they sought to transplant its faith onto the swamp; of which they were only marginally successful. Then their priests wandered across the hot-rocks and connected with the swamp's inhabitants for trade.   By then, a tiredness had overcome the step folk and survival had overtaken faith, it had pivoted into better facilitating trade.
— Temple Lecture

Overtime, the leadership of quinametli became a distinct entity whose purpose turned to meeting the diverse needs of the different microcosms in their distinct micro-climates across the sinks and swamp. The means by which they go about this is equally diverse, employing both legal and illegal means of doing so.   Quinametzin is still actively encouraged and spread but it is no longer a heavy requirement as was the original intent.

Instead of trying to build up every little workshop, store house, boat or road; the two-headed priests use quinametzin as a common ground to incorporate the desperate groups into their network of contacts along the length of the wilds. Who inturn, grow larger and begin to influence the goings-on of quinametzin's other members.
— Quinametli Expansionist Strategy

In this way, factions of unionists, separatists, campers and swampers can throw their weight around in local politics. Quinametzin, (at least publicly), has no political agenda, but does facilitate several political causes. This official policy has put them in trouble with appointed Trusts in the past. However, its decentralized structure has made prosecuting irregularities too difficult.

Document | Jul 6, 2020
Self-contained and serialized writings containing forbidden knowledge and reminders of past grievances, often written with winter plum juice on trashed pieces of grass.   It is well known that ordning help in its distribution but identifying exactly who is close to impossible due to how independent/decentralized the lower ranks are arranged.
A large class of mold, fungi and parasites thrive in the grooves in and under the caverns that provide medicinal value in treating diseases, birth control, bodily enhancements, ailments and in fashioning special casts for physical injury.   They are generally cheap, but are non-optional for those choosing to venture into the Deeper Swamp or normal areas of the cold swamp outside the proximities of any firewells.

Item | Jul 17, 2020
Fossilized honeydew, excreted from extinct giant aphids thousands of years ago, solidified into crystallized sap and extracted from caves and grottoes.   When the crystal solidifies, it is transparent and colourless. Then later turns green, yellow, blue, red, brown or orange depending on what seeps into it from the surrounding environment.   It is desired as a luxury treat.

It was the peak of quinametzin's influence. Then, there was ever a need for the quinametli. The multi-headed priests guided the masses and sat as judges to the rich and nobles.

The white case was the fallout of a highly contentious political election between two families for one of the rulerships in Protilla.

It has been termed "white" on account of the belief in the supposed 'white blood' of the true royals who are so ordained to rule the cities. And laid down the precedent by which the leaders are chosen.   It was a legal ruling that removed the 'white blood' requirement of 'Mothers' and 'Fathers' already in office. As it was before, either office holder could be removed in the event they publicly bleed and show their blood is red. Showings of non-white blood is grounds for dismissal as some kind of perjury to the deities.
— cultural reasoning for the white blood

It fell that the existence of white blood as an observable substance was a superstition that was being taken advantage to arbitrarily shuffle candidates to the benefit of one family or the other and to the detriment to the state.

Over the course of the following centuries, this decision had removed quinametzin's structural power from concurrent step culture. And at about the same time, the 'basin faiths' were infiltrating and usurping the role(s) it had in independent cities.   However, while the powers that be wrestled for the Step, individual priests followed the displaced and the desperate to the emerging sinks and were able to reestablished a lesser shadow of their prior influence.

Ethnicity | Dec 25, 2020
Detachments of elkin warriors accompany carriers as protectors through the black and reed roads between the Sinks and swamp towns.

Ethnicity | Jun 1, 2020
Carries cargo deep into the swamp through stack boats on the river of life and on the backs of terror birds.

Species | Jun 7, 2020
Make up the vast majority of the guard's clients, customers and carriers.

Ordinarily, there camps are a sanctioned gathering of low-skilled workers responsible for the extraction and shipment of raw materials at sites some measurable distance from most formal towns, with only basic living essentials, but still livable and warm enough.   Often times, the old priests would use their camp members as its own strong arms (unofficially) to facilitate nightly patrols and internal security. These isolated camps are, more or less, run by one-headed priests sent to oversee resource management and allocation.

Quinametzin heavily revolves around the worship of the step folks' tuskin ancestors.

It is a dying belief. A long time ago, observers counted the entire mix mash who make up the step folk. Now, centzon, cintēteo and cults of serpentism have long displaced the elders.
— State of current Quinametzin

A derogatory umbrella term sinklings use when referring to inhabitants around the firewells, frog wearers, ostoria and even sometimes included wildmen. They spur high demand for many sinkling goods.

There are three cooperatives operating within Soonous that produce and facilitate the movement of goods to and from the Floodlands to the larger valley that pass through step ports.
On the extreme ends of the wet wilds:

Organization | Jun 1, 2020
The college sources lots of controversial and questionable materials, some with teotl conducting properties, for magical experiments.

Settlement | Jun 2, 2020
The yatei host many groups wanting their services. Form the farmers in the wet fields to the patrolling fire ghosts. From the doctors volunteering in the Blue Bound to the scholars in teaching in the Talons.

Physically, the layered, flattened and polished hot-rocks connecting the many Sinks in cold swamp. It also names the overall trade system by which the vanilla flower is traded and which gives its name.

A Community School as Step culture once knew. They are the sole repository of formal education for the enlightenment of future priests in the fields of mathematics, astronomy and glyph writing. It is they, through their mystical knowledge, who understand the will of the Gods. At least until the precedent set by the White Case many years ago diminished their influence.

One temple haphazardly established in Tonda exerts considerable power over the colonists, through the children they teach. However, new priests sent from on high, have recently upset the dynamics within the schools and trigger aggressive moves from the old Sinkling priests.
— Foreign Investigator

Taking neither side of political life, the priests who have ventured on worldly tours teach a range of disciplines to the sons and daughters both the high and low borns; and often times mitigating between the two.

Self identified separatists are secretive. Yet, they are have found ever creative ways of spreading their agenda. Of which, many are dependent on the underhanded nature of the Old Guard in order to meet their logistic needs.

Families and individuals who have vested interests in maintaining the current status quo. Or likewise, rich emigrants or step folk who have never visited the sinks but profit from several business ventures. To unionists, the quinametli are a means of transporting goods, legitimately or not, to different markets to maximize profits.

Both ordning and ostoria are colloquial terms for describing sinklings and swampers respectively, who are under the employ of the quinametli in some way.

Ordning are members of the Old guards who tend to the sinkling side of the region: be it locals or step merchants who travel back and forth between the valley and the sinks.

Ostoria are members of the Old guards who venture and operate principally in the swamp land. Because of the hostile environment ostoria tend to be the swampers who live, and thus, used to its conditions and freely transport cargo between the sinks and the various firewell regimes.

Sinks of the Wet Wilds

A spider with the most toxic venom in any known animal.