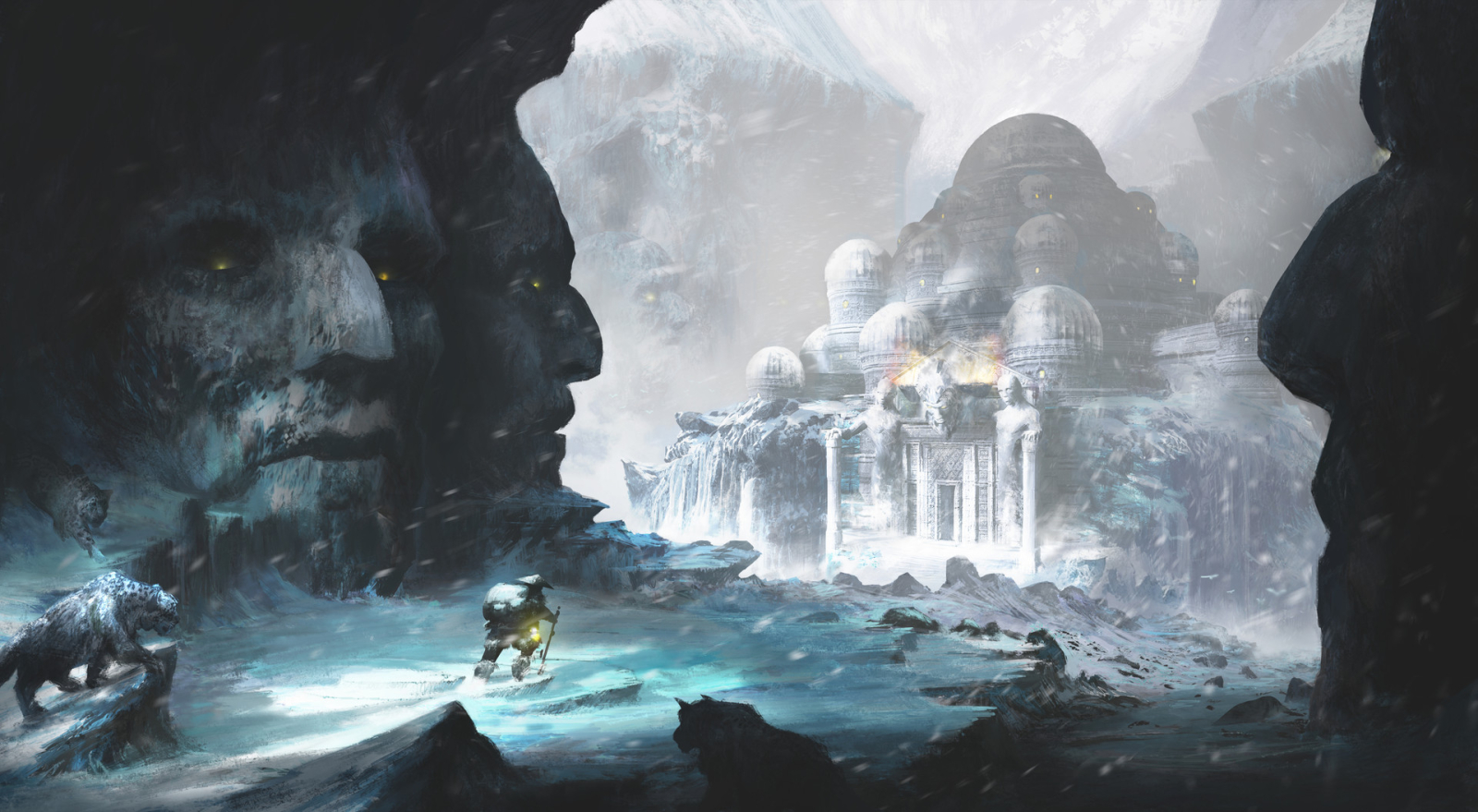 The municipal body that directly controls its own slice of the the Bad Step. It is ruled over by the "Parents" who are subsequently addressed as "father" and "mother". Old family allegiances are supposed to be forgotten, but there are usually subtle tells in policy by either the mother or father that are often criticized by other citizens.

It is believed that having dual but opposite gender rulers encourages the best qualities of both into a single leader.

The Father is charged with passing first judgment

The White Woman's gatte mouth plays a vital role in keeping the city watered. Piles of weekly snow fall over its hot-rock floor forming an ever rising and sinking water reservoir.

Several narrow and intersecting tracks of varying difficulty snake around the mountain foot to many of the city's entrances; creating insurmountable choke points and ambush opportunities against invading armies.

Given its difficult location, mass trade for its desirable products was infeasible until Soonous sponsored a fleet of Trade Balloons to systematically navigate the cold winds.   These convoys are generally not acknowledged by the far away Sacred Precinct in the valley basin, but they do know via their spies. Only the impossible difficulty in attacking White Woman, makes even Sangsalgu withhold from confrontation.

There are ten, still standing, above ground buildings that have been called "the Womb" in the past. They have traditionally been administrative palaces for the Mother and Father of the cavern city and have also been the largest buildings in their time.   The current Womb tops the summit side with four smaller domes intersecting with the main one. It was built using the Queen's Construction over the course of several dry seasons. The dome itself takes the place of a collapsed cave ceiling whose interior was previously used as a storage room.

There are no tuskin monoliths within the city. Instead, there are deep dug pockets in the mountain sides where the whole of the balloons are parked and the cargo loaded and unloaded.   In addition, for the sake of maintaining the image of following the trade embargo, there are several such pocket caves and smaller monoliths outside the city limits. Many balloon crews conduct their trades hidden in the ghost river.

The first colony White Woman established, well before the race to the bottom.

Glu by the Glow

A second colony of White Woman but whose first inhabitants were from Murn.

Established during the Race, atop a piled mound.

Established during the Race, atop a shallow mound.

A holdover territory during the Seductions from Yulyult Short Step.

It began, without alarm, with the natural death of a Father. And as procedure dictated, the land owning citizen would chose anew from a set of names. However, to the surprise of most, the family Kulunck, had put forward a child.   The fallout was a highly contentious political election between two families for one of the rulerships. It has been termed "white" on account of the belief in the supposed 'white blood' of the true royals who are so ordained to rule the cities. And laid down the precedent of future elections and was the catalyst for the Seductions

A period of wars and series of diplomatic unifications of various organisations and major settlements of the Bad Step.

This age marked a shift in the Step's political traditions when it became more expedient to partner with each other to survive the multi-front wars. It is acknowledged that the Age of Alliances began sometime in the last half of the Seductions where working together was the winning strategy.

Race to the Bottom

After the Seductions and the Alliance Age, the cavern cities redirected their aggressive energies toward a period of colonial expansion.

Organization | Apr 30, 2021
Maize merchants and balloon captains navigate between the breezeways and the black sons as important stopping points while riding the cold winds to funnel goods as quickly as possible.   The currents that blow in the northern part of Bad Step are less turbulent than over Mais, but not a speedy as through breezeway. Going through this route allows carriers to hide more easily from sang inspectors by flying over the cold swamp's wet wilds.   They collectively form the wind trade circuit.

Elkin in this Jump are generally left to manage themselves, which offers a greater deal of self determinism as is possible within the Long Step. White Woman is a favourite destination to elkin because of the similar climate and related cultures.

They have always been the largest feature and constructed through the most advance techniques of their time. Being carved from a mountain summit, the overall city has a pyramidal shape with three and a half stepped levels that circle the outskirts in ice covered spheres.

A common architectural feature throughout the city that covers the outermost buildings and some walkways to redirect chunks of snow that collect from the higher structures away from the lower ones and into the sharp valleys on either side of Iztaccíhuatl.

Unlike with Chu-Caan, White Woman digs deep into the mountain. It reaches into rich quarries of hot-rocks by which the people carve into homes for themselves.

Similar to Tlopetla, Iztaccíhuatl is a lone standing mountain that breaks the continuous landscape of the Bad Step's summits. It either formed during the rock rains where half the ancient range fell away or sometime after during a smaller earthquake.   Its summit slants somewhat in the direction of the Cold Swamp and is regularly blasted by its cold winds. On both side of Iztaccíhuatl, are narrow valleys called the Breezeways which are filled with sharp rocks fallen from the surrounding cliff sides. These broken passes make it easier for folks to enter and leave the wet wilds; and to be taxed by the White Woman's Black Sons.

Remove these ads. Join the Worldbuilders Guild
Caverns
In response to the prompt Write about a city or town in your world which is unusual or unique in some way.