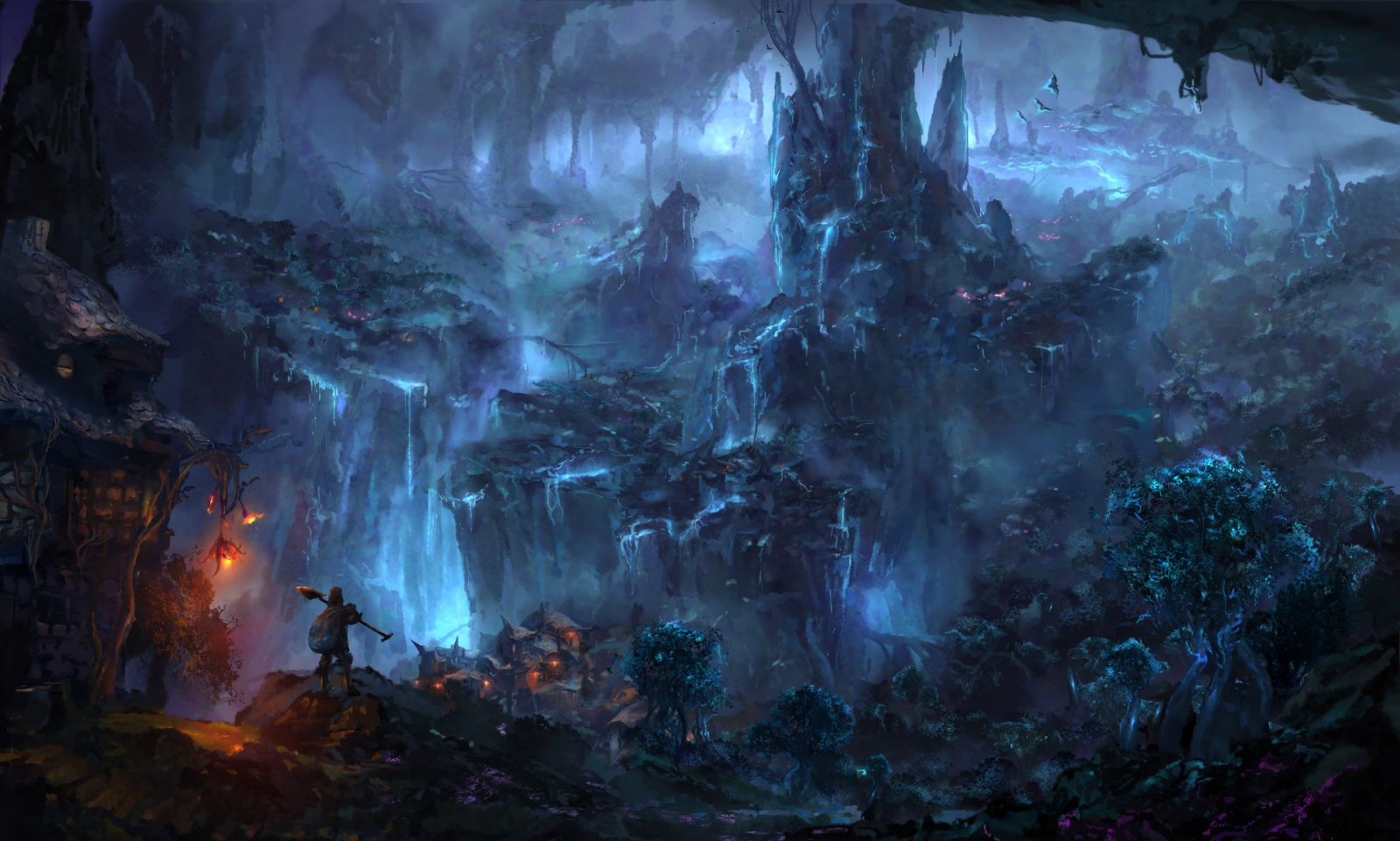 Its dark, true black
what if I stumbled
what if I lost the light
I'd had have my sense of touch
and sounds of caverns
sound wet and squishy
rivers drop through the rocks
and are swallowed in the void
it mocks me
the light is gone
sounds confound
prostrate over stone lends an indifferent feel
walk one way,
fall again,
then return from whence I came
but five feet lower
It breathes
It bleeds
It eats
It excretes
It suffers
It heals
It grows
And it always goes forward
I know this space
a welcoming hostility
living rocks and murky water
elemental and untouched
spaces conceal but just the right size
— Made for Me

It has been long thought that tunnels from the olden times of giants webs through the Step and worms their way underneath the ground leading towards valley floor and that secret organizations use. It is the ancient nursery of the Tuskin, a former home of Step Folks' ancestors and current home for the Caverns. The rocks of the deeper interior are solid masses of hot-rocks which raise the temperature to unbearable levels the deeper one ventures.   There are innumerable entrances into the mountain blood called Blood Openings. Closer to the peaks and mouths, the openings suck the cold winds in that make habitation better suitable to people. Though the main/largest openings are extremely well mapped and consist of several levels, but the deeper one goes into the bowels the less certain anyone can be of where they are.

Winter Plum: A white skinned fruit that grows out of the shear face of the Bad Step. Its flesh is firm, juicy and purple with a single dark seed at the center.   Creeping Figs: A species of invasive flowering plants that creeps along the hot-rock walls and sprouts finger shaped berries.   Sweet Worms: Tiny and thin, maggot-like worm capable of feeding on anything in the Blood.   Bats: Palm sized flying mammals more manoeuvrable than birds on membraned limbs.   Sack Fish: A blind species of pale fish capable of surviving outside of water and on the caves' rocky environment   Other Fungi: Various mushrooms, mosses, molds originating from the times of the giants that is the source of many poisons, medicines and dyes.
1. Gut Guard
2. Caterpillar Foam
3. Cuckoo Fungus
4. Egg Balls
5. Bleeding Tooth
6. White Incisor
7. Mad Fly
8. Hulks
9. Black Yeast
10. Ice Star
11. Morphing Stink
12. Cotton Mane
13. Smash
14. Deer Spores
15. Gripper Moss

Fungal Fabrics: But what makes these groves truly valuable is that in them are grown a species of fungi that are used to manufacture fungal fabrics that are water resistant, thermally insulating, rubber/leather-like, and light weight.   Hot-Rocks: Rough and black outcroppings that pile at the foot of the Bad Step having fallen off the mountain face. They also make up the subterranean interior of the caves.   Hot-rock have high thermal conducting properties that are perfect for constructing in-home stoves but do not emit heat on their own; as shown when they are mined from the ground and lose their heat. This suggest that there is some heat source deep in the earth. As even within deep of the interior is made of hot-rocks.

During the era of giants, the broods of giants and the giants' brood were kept under the mountain for safety. It might be that the cave system was pre-made by ancient volcanoes and later enlarged and expanded. The typical blood openings thought of by the rest of Dragonsgrave were widen by elder giants who physically pushed the earth aside and are called Gatte Mouths.   The Mouths are emblematic to the cavern cities. Not only are they massive holes in the ground, but also consists of huge, long sturdy platforms where their builders once walked; and where human homes and public works now reside.

But there are also smaller crevice-like openings hidden around the Step's natural landscape. Being a collection of many diverse peoples left behind, the step folk continued to alter the mouths to their specifications, then start to move deeper. They created lower cost home at one level, water collection at another and the fungal groves at the deepest level still habitable to people.

These are essentially populated blood openings where survivors of the rock rains congregated and found sustenance for themselves.   The open cave maw that was the starting point for many the cavern cities, that was easily defensible and provided many resources in the deeper depths.

Housed in the deepest, reachable depths of the cities' caverns are grown a rich assortment of mushrooms, mosses, molds, certain nuts, creeping figs, sweet worms and other species that grow well in the damp dark for purposes of local consumption.

A hidden lake deep inside the Mountain Blood of freezing water.   Despite the name, there is life within and around the shores in the form of spores, berries and shrooms.

The only entrance into the interior of Tlopetlan Mountain. Moving from the outside inward, starts with a decent on weathered steps into dark unmapped rooms where no non-Toik has ever made it through.   Unknown to everyone else except the Toik people, is that this mountain is one that levitates. Not so much that it is noticeable from the outside, but just enough to create space below lake level where comparative thin walls of black rock tumble around in small support to Tlopeta above it. Because the rock walls are not fixed, the layout of this dark, subterranean maze is ever changing, which has been to the benefit of its Toik inhabitants' defense.   Below even this area, is a secret body of boiling water where, twice a day, blasts steam though the maze and forces a geyser to erupt though the ancient lava shaft to reach the Coast.

A long windy mountain trail that criss crosses over natural plateaus, carved steps and in and out of blood openings.   It runs the entire length of the Bad Step from Mytenii in the north to Gaioor in the Floodland south.
Type
Cave System
Location under
Bad Step
Included Locations
Owning Organization
Long Step
Contested By
Inhabiting Species

Extensions into the Valley Floor

Building / Landmark | Oct 11, 2021
A graveyard, or otherwise a place of mourning, for the former ivory giants. It is filled with many hollow statues entombing the dusty, broken bones of the enormous beings.

There is at least one known underground river sourced from the ice at the peaks that melts and filters through the soil and traverses a virgin lava tube that coincides with the artificial channels under the basin.

There are channels of man-made underground waterways, cut into the bedrock, that carry water filtered through limestone from sources atop the Step to gardener cities serviced through deep dug wells.

Answering: "Describe a location in your world that is brimming with diverse or bizarre flora and fauna."
Visit hughpierre's Competition Page Check all other answers to this prompt Competition Homepage