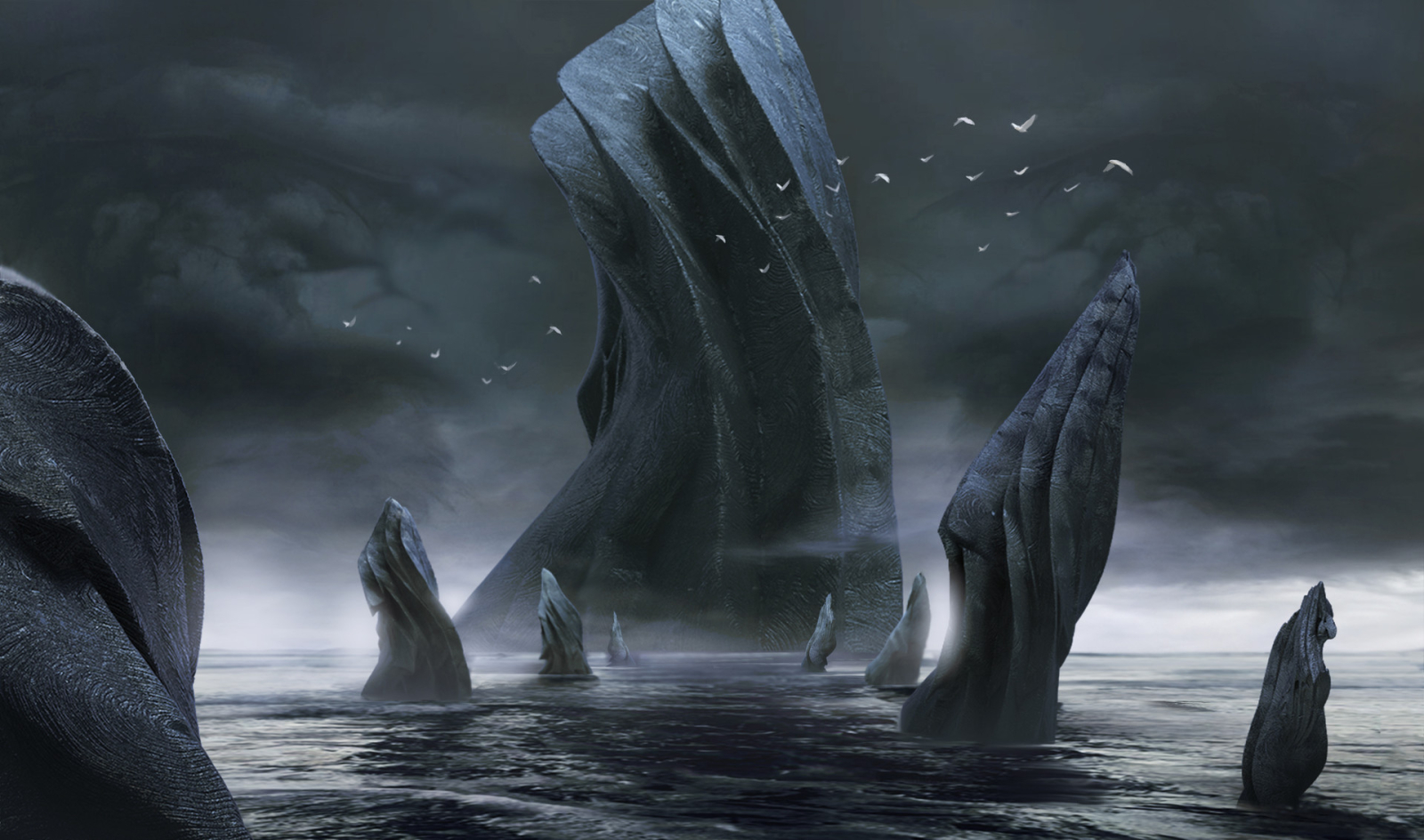 A secretive writing discipline among the special hornkin sects that utilizes geometric principles in a three dimensional space with clay as its preferred medium.   It was a secret language exclusive to the keanian priesthood to an insular group of Keans. As remembered by the Cloud Clans, the blocks folded were formed and placed around the most important places to the Keans.

Recurring abstract figurines circle eeat many times over around its water logged foundation, around its entrances, around it windows, its open roof and its helix rooms.

Uneducated and first-time viewers would just see a twisted column with alternating extrusions and made of harden putty. But it's more than that. The putty is resistant to weathering and repeating groove patterns across the surfaces of many miniatures and sculptures distances away from each other suggest the repeated patterns of a language.
— Guardian of the Keanian Cult

Geographic Location | Oct 1, 2021
The last vestiges of these religious icons can only be found circling around eeat. The exact nature or principles by which the folded block work have never been understood by anyone living.

Most Keanians, when they were alive, likely did not understand this form of expression either. As we understand that songs, signs and seals were partial to specific sects within their society and far better known.
— Comments made by Cizin

Folded blocks is not a language to be spoken by man or kin. But only by the high pitches and low rumbles of a fluid (wind or waves) moving across the detail folds of a morphed material.

It can be safely assumed that some sort of protection was granted by the priests' rocks. When the flood waters rush over the outer guard it transmutes that same water into something breathable to people.
— Captain of the Yatei Expeditionary Force

Not all the blocks have this effect. It is difficult, leaning on impossible, to determine what other effects these unusual blocks have. While it is not clear what all of them can do, all the blocks appear to have one function which can be noticed by the subtle hum they emit when activated:

All speech is vibrations through the air. In that vein, the rocks speak to.
— Yatei Scholar

The magical powers attributed to the carvings only occur when a speedy substance moves over their surfaces. It does not appear to matter what the block itself is made of or the type of fluid. So long as any substance hits at the right angle and makes full contact with every corner of the surface, the mysterious properties will active.

A branch of ancient magic related to frequencies with a focus on manufacturing permanent or semi-permanent means of transferring natural signatures.   These include knots, focus stones and their religious writing disciplines.


From what little can be gleamed from ill remembered stories and barely translated glyphs, it can be at least surmised that the folded blocks are the end results of the Keans toying with frequencies.
— Administrator from the Imperial Cult

While a script has been translated stating that any material can be made into a folded block, the Keanian had a clear preference for ink stone. Perhaps because of its malleability made it esier to shape.
— Miner Diver

Common clay was the favourite practice materials of keanian priests-to-be. Their discarded prototype still turn up in the churn soil on occasion without any latent magical ability.

Through unverified means, established priests would warp a specially chosen rock of some type into the construct of their mental image.

Remove these ads. Join the Worldbuilders Guild
Memories
In response to the prompt Write about the death of a language in your world.

Hi! Great article on a cool concept! I saw a typo in the quote under vibrations. "Vain" should be "vein".

Hi, thanks for pointing that out.