The Kaleidoscope System       Encyclopedia    Characters    Other Characters    Organic Characters      Ycalla
Table of Contents
The juvenile herd ship that Calyrra Ontéró found after it was separated from the others.
This article contains spoilers for the main game.

Please login to indicate whether you want to see those.

Like presumably all herd ships that are currently alive, the Lone Youngling was born long after the herd started roaming the stars alone. Consequently, she was not intended for a particular purpose apart from what is deeply ingrained in the species' genes. Although Those Who Know tried to investigate the matter, none of the ancient ships could provide an answer as to who bred or engineered the ships for carrying passengers.   What is known, however, is that this particular ship was born elsewhere in the universe, some time before the herd's last visit to this star system. This makes the Lone Youngling around 37 Years old in the Calendar of Those Who Know.

The herd's last visit ended in Year 80211 on Day 25 in The Phase formerly known as The Phase of Greatest Power. About nine Days earlier, the Lone Youngling had been distracted by the launch of Pasutgiruta and strayed away from the other ships. After she missed the opportunity to leave the system with them, she dejectedly returned to the Watery Planet where Pasutgiruta had been headed.

Ycalla can absorb raw electromagnetic energy, such as the radiation from a star or That Which Changes. When she has access to an oxygen-rich atmosphere, she switches to aerobic respiration. She prefers eating high-caloric food such as sugars and fats, although any material will do in a pinch.

Ycalla creates an air cushion for gliding over the ground, while gas pockets in her outer shell reduce her overall weight. For longer distances she relies on her jet propulsion. She requires a wide open space in order to take off.

When Ycalla feeds, she converts certain nutrients into the necessary fuel compounds for her jet propulsion. Being just a child, she only has one set of propulsion arms, but will grow more as she matures and requires additional thrust.

Traveling between star systems is only possible by teleporting between phenomena such as That Which Changes, and only when their electromagnetic fields are sufficiently synchronized. Since Ycalla missed the time window for departure, she will be trapped in this system until the rest of the herd returns.

Ycalla has no particular weapons, presumably because herd ships have no known enemies. However, her size and sturdy body can make her dangerous to smaller life forms or artificial structures. Her tongue, for instance, is strong enough to uproot small trees and crack rocks.

Ycalla can change the material properties of her tissues, in a manner similar to The Recombination worked by Those Who Know. She uses this to ward off injuries, shield herself and her passengers from extreme temperatures or blend in better with her surroundings.

Ycalla can change the coloration of her skin to mimic the world around her. Additionally, she can emulate light sources via bioluminescence and alter her skin texture to match the environment's surface textures.

Ycalla produces trilling and cooing sounds when a medium for transmitting soundwaves is available. Unfortunately, no-one besides Those Who Know understands their precise meaning, but the emotional intent can be picked up by people familiar with her.

Herd ships are capable of a form of Telepathy, transmitting radio signals to their friends and family while they are traveling through the vacuum of space. In theory, Ycalla could use the same method to connect to radio devices developed by other species, but that would require both sides to speak a shared language.

She has two large eyes near the front for examining targets in detail. Additionally, most of her skin is photosensitive which allows her to pick up and replicate the shapes and colors around her. The latter mostly happens subconsciously.   Ycalla has a keen sense of smell which allows her to track down the necessary nutrients or detect potential threats at long distances. Likewise, she can quickly identify less aromatic substances by taste once they enter her mouth. 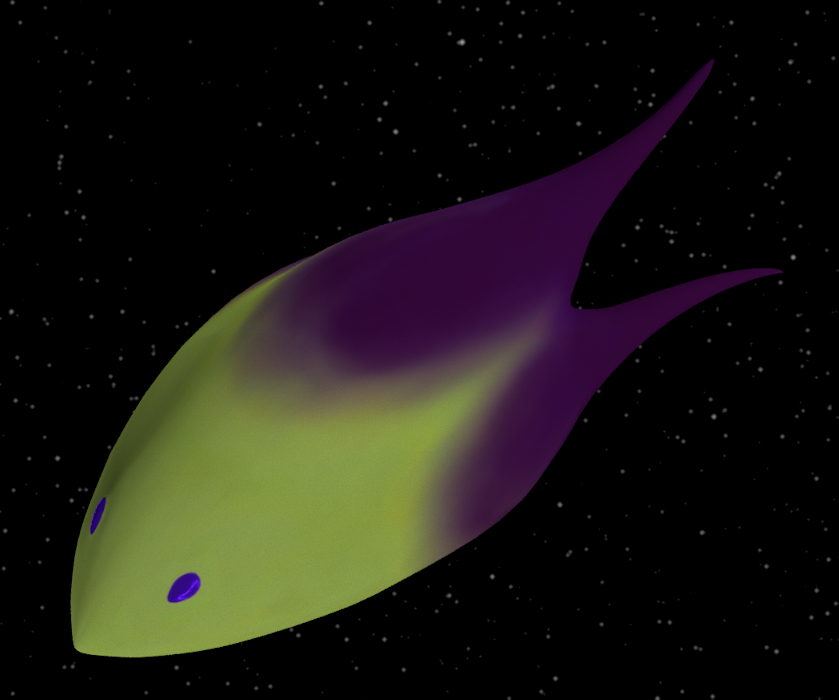 One of the oldest elements of my world - the whole project formed around the "a girl and her pet spaceship" idea. So obviously, Ycalla is the most important vehicle in the Kaleidoscope system.   Is there anything else that you would like to know about her? What do you think of my approach to handling spoilers?

Such a lovely creature! I also love the map, it really has a nice amount of detail.

I like the Ycalla voice recordings! Spoiler sections look good too.

An interesting 'ship'. It's somewhat a transient thing, being a life-form and a vehicle/tool at the same time. I guess you have been taking inspiration from your scientific endeavours for this. :)

Thank you, glad you like her! ^^ Heh, in fact it was more the other way around - I partially ended up in computer science because I wanted to learn how to program Ycalla for my dream video game. But yeah, I do often find that my job and my hobby are tightly linked.

Oh, so you're 'the other way around' with your inspiration. ^^ Well, I never really pursued a career in the sciences although biology was my strongest asset in school. But I suck at all the rest (math, chemistry and so on), so I turned to cultural studies. I successfully graduated twice but didn't find a job. Now I'm back at the university with Latin and biology in a Master of Education programme (which doesn't require math :> ). I now try to incorporate a lot of what I studied before into my work here. And hopefully one day I will learn how to write a decent story and make a novel out of it. *sorry for unsollicitedly spamming my personal background ^^*

I love this idea. The map is amazing, and I love all the layers. <3 Really well done article.