by Annie Stein
In the shadows of the Iron Spires, migrating along the terminator, walks Penumbra. Soldiers, mercenaries, and civilians alike warily watch the sky, always prepared for another solar assault. Penumbra is the front line of defence against Solar Pulses, the death throes of the Chained Sun.
Penumbra was established during the Scorching of Mercury as a base for the Martian Military. It has since expanded in a sustained interplanetary collaborative effort to prevent a new Solar Invasion.   Host to soldiers of all stripes and colours, mercenaries, and crew, Penumbra is also tailed by civilians seeking protection and profit. The settlement is migratory, travelling ahead of the slowly creeping dawn to avoid the extremes of night and day. Penumbra never stays put for longer than a fortnight. Once the temperatures begin to rise, Flightbase Crawlers and other vehicles are roused to bring Penumbra yet again to the edge of the night.   Penumbra is today the largest settlement on Mercury, and the seat of the Mercurian Triumvirate. Despite the presence of the Triumvirate, Penumbra itself is run by the Interplanetary Solar Defence Council.

Putting up a Fight

Penumbra has reinforcements from all over the Solar System. The majority of the ground forces are Outer World mercenaries payrolled by the Merchant Princes of Saturn, while Martians are prevalent in ISDC and the communications and tech departments. Venus is responsible for much of the logistics and supply of Penumbra, but Fei are rare due to their unique biochemistry.   Neptune and Uranus remain focused on the defence of the Solar System from outside threats, primarily contributing technology. They have, however, each contributed a Sentinel to Project Ikarus, alongside the necessary staffage and life support for these soldiers. 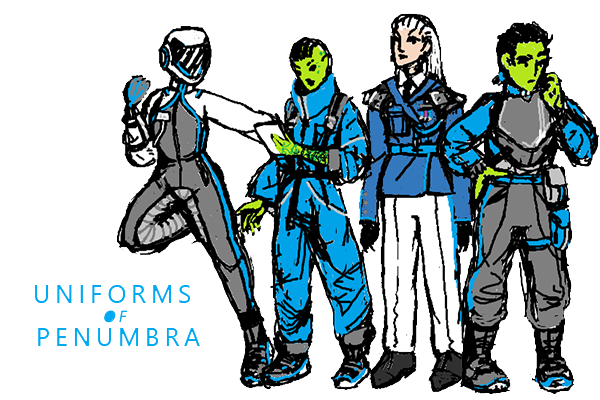 Uniforms of Penumbra by Annie Stein

They keep it in the pods mostly. The air here must be torture. But have you seen it fight? Blood bloomed like ribbons. It would seize their blood out of their wounds, turn them into projectiles and skewer them upon their own life force. If I hadn't seen it, I would never have believed it.
— Describing the Neptunian Sentinel

When the command centre Cadaceus first detects a Solar Pulse, the initial response is to attempt to barrage it from orbit and with ground artillery. When this is insufficient, Project Ikarus is deployed.   Project Ikarus utilizes smaller squads or even lone ace fighters against solar invasions. These teams and individuals are highly capable and are given free rein to use their powers as they see fit against the enemies.

The initial plan for Penumbra was to build a standard Martian ground base. The Martian Military began excavations and preparations for a permanent base outside of Hokusai. During this construction they had arranged a viewing of the atmodome of one of the Iron Spires, but before it could be viewed, the atmodome was destroyed by a Solar Pulse. The Martian Military began looking into other solutions.   While most Mercurians were fleeing en masse, the Martian delegation noticed that the local nomadic cultures chose to remain. These modern nomads would travel along the terminator of the planet, staying in the twilight to avoid the intense heat of day and cold of night.   A migratory military base, while unconventional, was deemed far more sustainable. Military Officials, accompanied by engineers and crew of Penumbra, met with the local nomads to learn more about the specific challenges of Mercurian migration. These lessons were then used to adapt Martian camp protocols for migration.
Water is acquired from the nearby ice poles by Borealis Ice Mining.   The majority of the food is imported from off-world. A few of the civilians sell local cuisine, like the drinking hole Oasis.   Most of the shelters are tents and other temporary structures. Vehicles are the closest equivalent to permanent structures.   Penumbra is able to set up shelters, the aid tent, and basic sanitation in an hour or two, provided there are no more than average delay factors.   Larger and lower-priority shelters like the mess hall can take a few more hours, and it is usually about half a day until the power grid is fully online.
Alternative Name(s)
ISDC H-5 Base
Type
Military, Base
Inhabitant Demonym
Umbran
Location under
Mercury
Included Locations
Characters in Location
Vehicles Present
Table of Contents
This article is a stub . It will be expanded upon later.

Uniforms of Penumbra by Annie Stein 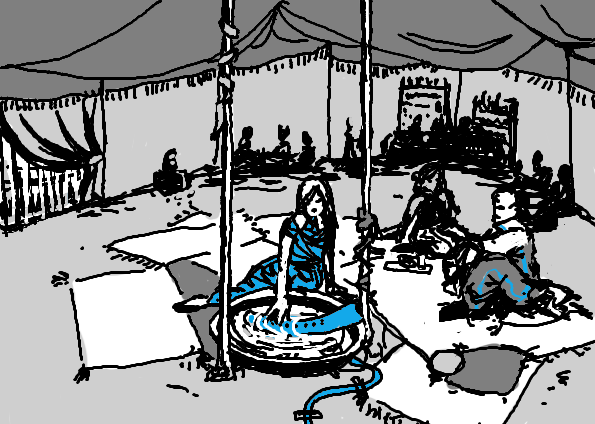 Oasis by Annie Stein
Please Login in order to comment!

What a lovely, well made Article, on a intriguing topic, nnie! Good job, I hope I get to see more in this World

Thank you! It's so fun writing this setting, I'm having a blast ^^

Really nice article. I like this nomadic idea very much, also that of the tensions with the indigenous nomadic population. What I would have been interested in now, though, is how quickly they have to move on. Can you sometimes stay in one place for a (earth) day or is it more like hours? Or weeks? Apart from that, I am curious to see more of this world.

Thank you! They actually don't have to move that fast at all, because of how unique the Mercurian day cycle is.   So I'm writing a longer and more thorough explanation for my Mercury article, but basically, Mercury has a very interesting combination of orbit speed and spin speed that means a Mercurian day is two Mercurian years and about 176 earth days long. Add to it that Mercury is a lot smaller, and you could actually comfortably keep pace with the terminator even at the equator, where it moves at around 3.6 km/h or 2.2 mph.   I'm guessing that the Terminator is more than six but less than 18 degrees of the total circumference, that means that if you walked (or drove) to the edge of the dawn, you could stay there for just shy of three days (if we go for the conservative estimation) or eight days before you have to pack up and move again.