by Annie Stein
At Penumbra, the uniform was meant to be seen. Grey was a given, who would offer their life unless there was something to atone for? White was justified when you tallied monsters rather than men. Blue cleansed the red out of the ledger.
Penumbra's uniforms are the standardized and distinctive outfits worn when carrying out official duties. They are intended to be practical outfits that can be worn regularly, as well as a way to swiftly identify the role of the wearer. Most of the uniforms utilize grey, white and blue, considered to be the official colors of Penumbra. The flight suit is manufactured on and imported from Venus, while the other uniforms are generally produced on Phobos.   Most service members are issued with fatigues and dress uniforms, and many also receive crew overalls. Pilots are issued flight suits. Uniform regulations are generally permissive. While appropriate attire for one's duty is expected (such as overalls for mechanical work or flight suits for piloting) broad discretion in the particulars is permitted. Aside from the dress uniform, most accessories or modifications are allowed, and it is particularly rare to see anyone wearing the crew overalls exactly to spec.

According to the PR department of Penumbra, serving in Penumbra is a calling, and Umbran uniforms were designed to embody the commitment to defending Mercury and the Solar System.   More important, though, is the effect that a consistent color theme has on cross-service camaraderie. Penumbra is a multi-disciplinary effort, and unity between branches is necessary to effectively carry out its mission. The bold colors also inspire the public, increasing appetite for military spending in a way that a distant existential threat does not quite achieve.

Life and water. The antithesis of the invading Sun, woven throughout the fabric of the flight suit.
Loyalty Security Protection

The noble purpose of defending the Solar System. The skies of Mercury that we defend.   Purity Precision Peace

Mercury, whose defense is the primary goal of Project Ikarus and is the very ground we stride on.   Practical Reliable Industrial 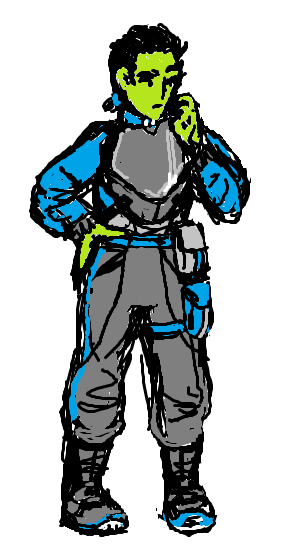 Penumbra Fatigues by Annie Stein
Penumbra's fatigues are the uniform worn by service members when other gear is not required, e.g. crew overalls or flight suits. They are designed to be light, practical and comfortable. The fatigues are modular, with individuals free to add or remove parts as required.   The basic outfit consists of a blue jacket and grey trousers. The trousers have a waist-adjustment cord as well as loops for a belt, and the sides are lined with stick-pads and loops for attaching external pouches. The jacket has a standing collar that can be folded up for use with chest armor, and is usually worn over an undershirt. Members that are stationed outdoors often opt for the grey heat-wicking undershirt, while others wear whatever shirts they brought or purchased. Rank insignia are displayed on the upper arms and on the chest of each uniform piece.   The basic uniform as well as all varieties of undershirt are issued to every member, and the rest of the uniform is generally issued on a need-to-have basis. However, pouches can be purchased from the commissary and used freely. Some people are known to go overboard with these pouches, though they are advised against it.

The crew of Penumbra wear high-visibility overalls. These overalls are typically a bright Penumbra blue with reflective piping along the collar, pockets, and in a t-shape along the back. A pair of padded suspenders attached to an o-ring in the back help distribute the weight.   The overalls are made from a synthetic weave. They are stain-resistant and flame-resistent and can easily be laundered. They do not offer much protection, and are intended to be worn over regular clothing while working.   The overalls are one size fits all, so many crewmembers adapt theirs by rolling up the sleeves or legs. The jacket is often worn down around the hips.   Senior crewmembers wear a white variant of the crew overalls. 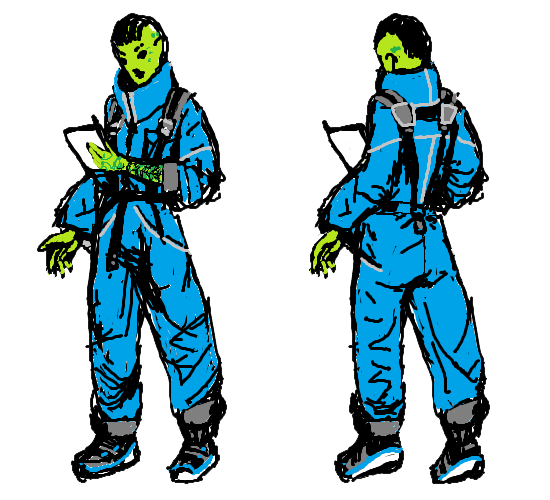 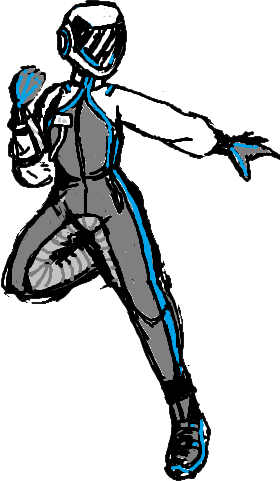 Flight Suit — Front by Annie Stein
Penumbra's flight suit is a grey jumpsuit with blue piping down the sides. Under the armpit, the piping tails off and collects at the center underneath the collar. The arms and shoulders are white.   The flight suit is wind- and flame-resistant, and comfortable to wear for long periods.   In high g-force enviroments the trousers are inflated with gas to increase pressure on the legs. This added pressure prevents the pilots blood from pooling in their legs and helps maintain bloodflow in the brain.
The pictured flightsuit is outfitted with a cooling system, a wrist-mirror and haptic controller gloves. 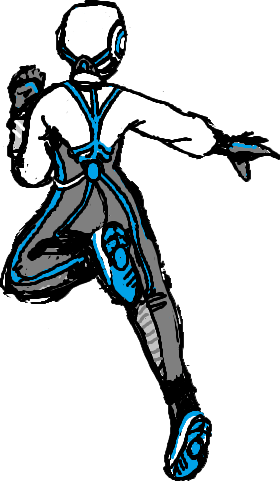 Flight Suit — Back by Annie Stein

The dress uniform is worn by the upper ranks of the Penumbra military. It is the same style as the Martian Military's dress uniform, except in the Penumbra colours. Umbran officers also wear a blue fourragère, a braided cord with a needle at the end. This rope and nail hearkens back to an ancient threat made by a long-forgotten king, who threatened to hang his soldiers for cowardice. Insulted, the soldiers took to wearing hanging rope as if to invite the world to condemn them as cowards should they be caught running from battle.   The dress uniform features a jacket with contrasting lining and piping, worn with leather epaulettes. The dress uniform can be worn with trousers or a skirt. Rank and badges are prominently displayed. While Penumbra is generally lax on uniform regulations for its rank and file, officers are held to a higher standard.   Each branch of the military has their own jacket colour. The army wears a black jacket, the navy wears blue, and the air force wears a white jacket. Field officers wear white trousers with a blue stripe, while junior officers (and the rank and file, should formal wear be required) wear grey trousers with a white stripe.

Field Officer Dress Uniform by Annie Stein
Item type
Clothing / Accessory
Current Location
Penumbra
Table of Contents
This article is a stub . It will be expanded upon later.
In response to the prompt Write about a uniform in your world: what is it for and what does it represent?

The header quote is by Emily Dickinson

To fight aloud, is very brave -
But gallanter, I know
Who charge within the bosom
The Calvalry of Wo -   Who win, and nations do not see -
Who fall - and none observe -
Whose dying eyes, no Country
Regards with patriot love -   We trust, in plumed procession
For such, the Angels go -
Rank after Rank, with even feet -
And Uniforms of snow.
— To fight aloud is very brave - (138)

Woo Emily Dickinson.   This is a great article - I've enjoyed seeing the progression of the uniform art as you've worked on it. I really like the symbolism of the colours and the consistency across all the roles.   'Some people are known to go overboard with these pouches, though they are advised against it. ' This made me laugh. I am imagining a person whose uniform is basically just pouches.   Great job! :D

Thank you so much! It's been good fun to draw, and I'm glad they seem consistent.   I think the jargon for pouch guy is geardo. Once a man, today he is only pocket.

Amazing article! I love all the details and the personalisation possible, as well as how you explained the colour symbolisms :D

Thank you so much! I wanted to give myself lots of options on how to draw these in case I needed to make people stand out.

I love the thought put into the colors, symbolism, and style of the uniforms. Your pictures are divine.

Thank you! I had a great time designing the outfits and thinking of all the pieces that go into it. I love fashion, can you tell?