The Ice Flats formed at the bottom of an ancient crater left by a meteorite which struck the planet, altering its axial tilt to where it is in the present day. A water-like substance bubbled up from aquifers under the crater to form the Flats themselves, and gradually the formation of the ice cap and the increasingly harsh winter storms eroded the rim of the crater, shaping the surrounding mountain tops, cliff faces, and other key features. The passes formed through the vagaries of geological phenomena, but some clans held, and still hold, to legends that they were carved out for unknown reasons by the Snow Warrior or spirits that would coalesce into that entity.

The Ice Flats is a vast crater lake, bordering on an inland sea, that sits within a sprawling caldera, the result of an ancient meteor strike that also vastly altered the planet Mudewei's axial tilt and gave rise to its two natural moons. The caldera is a roughly circular region amid the Frozen Wastes and separated from much of the rest of the harsh arctic environment by a ring of mountains. The mountains are broken up unevenly by passes named for their varying width and overall placement: the Greater Pass is the widest and opens to the northwest; the Lesser Pass is the least wide and opens to the southeast, as well as being home to the hunting routes and some of the traditional migration routes; the Low Pass opens to the south, and is almost tied with the Wide Pass (which opens to the east) for width. The Low Pass also home to most of the traditional migration routes.   Between the mountains and the Ice Flats the terrain is mostly flat, save foothills at the base of the mountains. This circle of flat terrain is significantly sheltered by the mountains, and so does not experience much of the harshness of conditions usually occurring in the Frozen Wastes. However, the Flats region still experiences powerful Ice Storms. The Stenza, the locals of the region, have adapted to these harsh weather events by using ice as a building material, developing shield technology on a large scale, and digging into the permafrost of the region to create basements and tunnels between clan settlements.   The Ice Flats, the central crater lake/sea, is full of a sheer-thickening substance that is not, but does contain, water. It also contains a host of other substrates, fluids, bacteria, and so forth. Though Stenza have done their best to replicate and improve upon some of this fluid's properties, they are especially stymied when it comes to the relationship between the substance, its contents, and the development of pups, despite the centrality of the Ice Flats to the continuity of the species.

The Ice Flats, and the regions surrounding it, are famously inhospitable to most forms of life. However, the crater sea has given rise to its own tree of life, accounting for both the existence of the Stenza and for a vast majority of the bird life on Mudewei (to say nothing for large numbers of single-celled species both known and unknown). Macroorganisms originating from this pool of life are still fairly rare compared to the diversity produced by the second of Mudewei's genetic lineages.   That being said, species from the two trees of life have adapted to one another. Northern carnivores have evolved to eat their herbivorous neighbors despite genetic relation, jury-rigging compatibility through enzymes. Likewise, certain species have evolved the insulation to survive up north at least temporarily. Birds of prey adapted to warmer climes, moving south as they went and eating fish and bugs, suggesting the jury-rigged compatibility is an early innovation of the Ice Flats tree of life, soundly outcompeting almost anything else except at the single-celled level.   Even more noteworthy, the Stenza have, by virtue of their keen hearing, been able to discern that their southern neighbors the Sandibari had a language and could be negotiated with (specifically by means of the daring Stenza willing to consume the 'alashaia fruit poisonous to Sandibari).

The Frozen Wastes broadly is known to experience incredibly harsh winters, which drive the Stenza's unusually regular migration patterns and otherwise govern the cycles of life for a host of species from the Sandibari to Basket Horns to the Stenza themselves. The winter pushes many organisms south toward warmer (or survivable) climes, and have significant influence on Stenza hunting patterns, even influencing the evolution of something like a mating season in them.

The extreme weather of the Frozen Wastes causes such phenomena as Ice Storms, often at unusual times. The local population has mythologized these severe weather events, and local conditions in general, as a collection of spirits known collectively as the Snow Warrior and Snow Pups. Additionally, the Ice Flats Substance is not known to occur anywhere else in the space that Stenza have explored, significantly hindering colonization and terraforming efforts. The latter has caused the Stenza to switch gears from expanding off world to devoting resources to protecting Mudewei to preserve their home and species.

The Ice Flats caldera is the source of an entire tree of life native to Mudewei, separate from the primordial ooze that formed elsewhere on the planet. This tree is characterized by a six-base-pair glycol-based means of transmitting genetic information, as well as being generally quadrupedal compared to the hexapedal life found elsewhere on the planet (although this comparison is not always an accurate measure, due to the adaptations undertaken across both trees over millions of years to allow both trees of life to adapt to one another). The current extant life which originated from the Ice Flats include most of the planet's birds and the Stenza themselves, alongside hosts of single-celled organisms that inhabit the liquid in the Ice Flats, contributing in unknown ways to all of its functions. The Stenza in particular rely on the Ice Flats for the development of their pups when they are too large and heavy for their mothers to carry, and the nature of this interaction and reliance is a subject of intense scientific study.

The most prominent resource originating from the Ice Flats is the Ice Flats Substance, a substance of incredible versatility that the Stenza have put to use in a host of technologies, such as Medical Gel, dietary aids for pups and adults suffering from various conditions, and aids in certain forms of stasis. The substance is still under scientific investigation, as many of its properties are still unknown and more are discovered every year.

The Ice Flats came to be when an asteroid struck Mudewei, radically altering its tilt, creating its two moons, and leaving behind a crater in which a liquid gradually bubbled to the surface, picking up composites along the way and over many eons. The liquid became a second primordial ooze, which evolved a handful of life forms on the planet including The Stenza. (The first primordial ooze is responsible for most everything else, including the Sandibari.)   The Ice Flats have been the site of Stenza births since before there were Stenza proper, and ancient proto-Stenza remains have been uncovered and reburied by the ebb and flow of the Ice Flats tides. (One of the common early sources of inter-clan conflict was birthing grounds and rights to "coastal" territory.) By the time of Unification, most of that had settled down into fairly peaceful coexistence.   The Flats came to occupy a particular place in Stenza religious and cultural thought. The Mudeweian word for it is È-kîħòtôħ, which roughly means "The Center of Life" or "The Center of the Universe". The "Ice Flats" designation comes from Ta'zhen's conception of what it looks like, and then trying to convey that description later to other humans (coupled with the Mudeweian designation, an accepted code in interspecies relations). 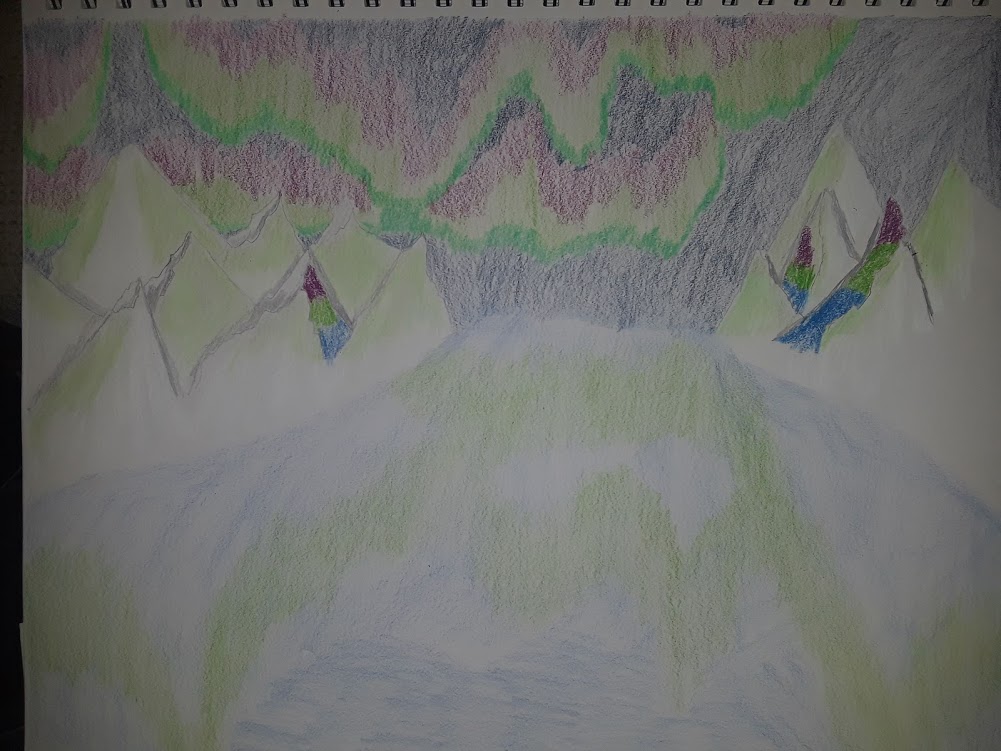 The Ice Flats are such an interesting area, and I love the history behind it. I also want to touch the weird substance. It calls to me.

You can walk across it, or bounce on it :D (But try not to when the pups are in there, they can be very delicate, especially at first.)