They're so cute but I can't feel my legs!
— Ta'zhen, being beseiged

Stenza pups, the answer to the question, "what if cats had gecko feet?"

A pup, in the native language ær' (pl. æræ) is a Stenza infant.

Pups are quadrupedal, possessing ridges on their hands and feet and more cartilage than bone at their hips and shoulders to facilitate ease of movement. When they first emerge from the Ice Flats, their faces are smooth. The lines and folds of the face that, among other things, facilitate the wearing of trophies (see: Facial Decoration) begin developing at or slightly past the half-year mark.

Scientists theorize that the hormones released into the Stenza adult upon contact with pups, which have potent mood regulating effects, evolved as a means of protecting the pups from accidental death in the early days of the species. Following an initial buzz, the adult feels a sense of calm or focus that allows them to process more data on their surroundings than otherwise possible, as well as increasing reaction time to potential threats.   Pups themselves are not immune from hormonal effects. They commonly seek out adults when frightened and, despite being in communal care, sometimes choose a "favorite". Eager pup participation in scientific studies (borne out of curiosity on their part) has generated a wealth of data suggesting the seeking of one or more adults is a defense mechanism connected intimately with the hormone response in adult Stenza.   These studies have also shown that young pups struggle to differentiate the self from the other, occasionally summarized as the belief that "I am me and also everyone I am surrounded by". Almost certainly a consequence of the Collective Knowledge, it confirms what many Stenza have long suspected about pup group behavior, individuation, and personal expression. This seemingly gestalt-like psychology is thought to influence the way Stenza interact with one another later in life, although this connection is still extremely murky. It is also thought that disconnection from the Collective is a crucial step in pup individuation.

Their high mobility allows pups to skitter around across a host of surfaces, including sometimes climbing on walls or across ceilings. Because it is easy for them to "know" anything they'd like (see above), they share a common propensity to seek out adventure, often leading to trouble. Total "child proofing" is impossible, so efforts are reserved for situations where pups might get themselves killed through some means. Bombs and teleport technology are notoriously difficult to operate correctly for this reason, and this is also part of the reason why engine rooms are maintained at microgravity (the other part of the reason being the engines themselves).   This tendency has also led to imperial regulations, such as the requirement that each registered starship to maintain at last three redundancies for all on-board systems, and five for major systems, in case a pup or two has stowed away. These regulations increase costs, but are also in place for the safety of the pilots and other such personnel, as much as the pups themselves.   After they've exhausted themselves with their individual and group plans to raid food storage and break the ship's nav systems, pups gather into piles of varying size, from two members up to ten or so, in order to sleep (this correlates with litter size, and the size of the litter a pup was born into seems to have some influence over how big a pile they prefer to sleep in). A single sleepy pup will struggle to sleep, and so are commonly picked up by adults or found by other pups, who then subsume the pup into their pile (in the case of the latter) or form a pseudo-pile (in the case of the former). Pup sleep involves one substantial phase lasting from the late evening into the early morning (whereupon they tend to race about, yell, and otherwise work off energy), a nap in the morning, and potentially a nap later in the day, as well. (As pups age into children and then adults, this becomes a triphasic sleep schedule as adults often awake at various points during the night to spin, weave, do other chores, and make sure the pups haven't found some novel way to kill themselves on accident.)   Pups have a long and storied history of deciding, typically as a group, to gather upon and anneal to an adult, very frequently pinning that adult in place. Typically this involves up to twenty pups. Why they do this is unknown, but it is common enough that work schedules are built to accommodate the practice (known in English, playfully, as "besieging"). Smaller groups of pups may decide to combine these behaviors, besieging an adult and subsuming that person into a sleeping pile at the same time. While at some point Stenza "grow out" of social sleeping patterns, it has been found that adults who have pups gathered around them for sleep, have deeper and more restful sleep.

Pups' vocal chords do not fully develop until around or shortly after the time they begin shifting (see below). However, this has not kept them from trying to communicate before then. The closest they come to Mudeweian Stenza is a form of babbling, stringing together the syllables their limited voice box will allow in an effort to make a given point. To help facilitate this, it is considered taboo to try to use "baby talk" with Stenza infants, and the Stenza language does not easily facilitate such "baby talk".   But pups also engage in a host of other means of communication, with themselves and with adults. They often hiss at things or persons with whom they are fighting, evolving into yowls and attempts at roars when the matter gets serious. Additionally, pups also mew in order to get attention from adults, often before they babble, struggling to communicate about something important to them.

Due to constant mental connection to the Collective Knowledge, pups are held to be among the most intelligent of juvenile lifeforms known to the Stenza. This also means that they are aware of and capable of fully understanding the concept of deity. While the question is not always a priority to pups, they do tend to entertain it around their first Migration, which may be their first time hearing adults verbally address the subject of deities and muhye, or spirits. They can very quickly access prior knowledge on the subject and form their own opinions, which they may then express (see above).   Pups are also capable of having religious experiences or encounters with the gods, which forces a disconnection from the Collective due to the nature of the phenomenon. These episodes can be overwhelming, and often require the assistance of both a medical doctor and a religious expert to help the pup through the experience, and provide appropriate medical and psychological care.

After two years of life, pups begin to disconnect from the Collective. This is commonly spontaneous and causes the loss of hormonal interplay between adults and pups, and may also be quite distressing. At about this time, many pups also begin displaying facultative bipedalism and other "practice" behaviors. Approximately two weeks later, pups become lethargic and begin to sleep solitary. During this time, the cartilage at their hips and shoulders begins to shift around and harden, forming the pelvis and shoulder blades. This entire process is known as "shifting", and when pups awake from it, they are no longer pups. They are now young children. Shortly afterward, they are still allowed access to food stores due to the metabolic requirements of the shift, and within the year they will begin attending school.
Although the matter if ritual cleanliness or preparedness does not always come up, when it does, it is widely agreed that pups are considered to be in a consistent state of such. 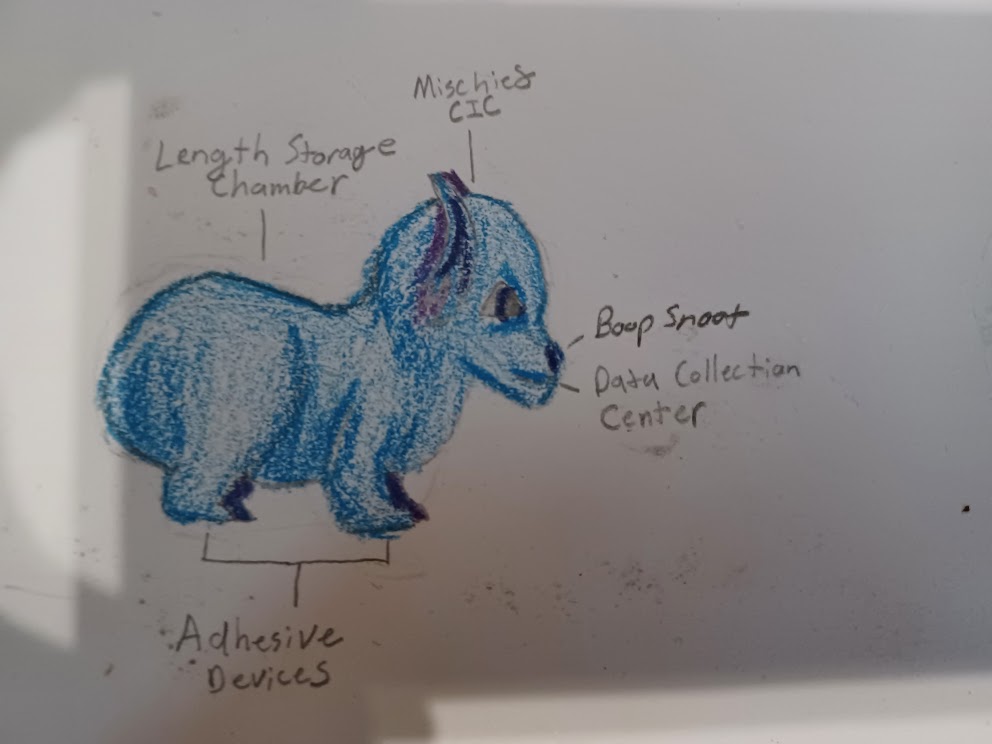 My name is pup
I like this dey
bekuz it storm
I can go play
wun thing I want
my glee shell show
I stik out me tung
I lik the snow.
— ShyRedFox

In case of emergency, adults grab pups by the scruff of the neck to move them. Due to where pups find themselves, using the mouth is most common, with hands and arms used to navigate into and out of tricky positions. It's possible this method of pup transport was once almost as common as pups annealing themselves to adults voluntarily.

I love the descriptions of these little raggamuffins! (I want one now.)

Well whatever you try to childproof with will be gnawed through within 24 hours, so good luck to you! :D

We have had to put childproof locks *everywhere* so I totally relate to these parents.

The truly impossible task of keeping kids from offing themselves on accident. The struggle is real.

I could have sworn I read this and left a comment. Maybe I'm hallucinating.   I love the sound of the Pups - I always enjoy whenever they pop up in articles about the Stenza. I really love the poem by ShyRedFox too. That's hilarious. XD

The poem made me laugh when I first read it!   I know you commented on the Snow Pup articles, so there's that :D

I have come too late and everyone as said what I meant too! Funny article!

They're good lil guys and gals :D I enjoy writing about them.