The impenetrable bastion of Archana


"All the Archani are putting their last hopes of freedom on us. For generations, the Wardens have fought and died to protect our families... AND SO MUST WE! As long as we keep fighting, this battle still isn't lost. As long as a single one of us stands between them and our homes, these walls will not fall. Not today, not ever."
— Ser Achard Lionhart, 480 AE, Battle of the Red Diamond


Well known to the enemies of Archana, Fort Edgemourn has earned its reputation as the Impenetrable Fort. Many times has the kingdom held its ground in this location, and only once was it breached - but that was before the Steel Wardens. No numbers, no siege weapons, no magic could defeat the engineering of its walls paired with the skill and training of the Wardens. 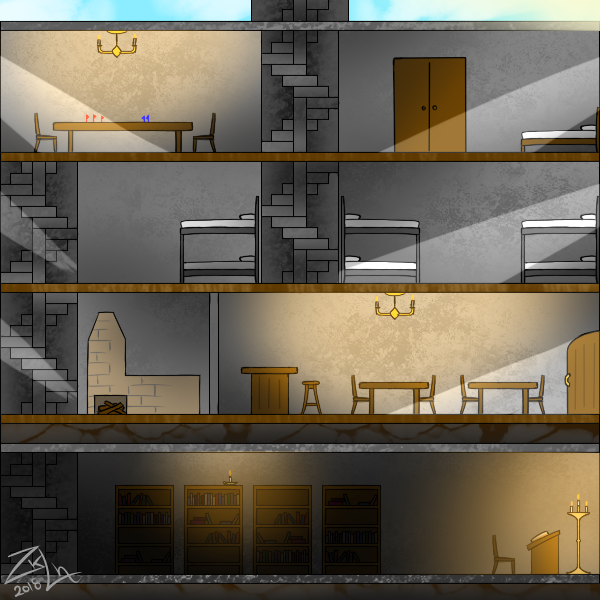 On the ground floor, there is a large hall filled with tables, a bar, and a kitchen - this is where the Wardens would spend most of their idle time. In the back is where the armory is: tens of thousands of pieces of equipment, weapons, and armors, from steel to mithril. There is also a large training area with dummies and targets, obstacle courses and exercising equipment. A door leads to the underground floor, where the magic happens - literally. There the Wardens kept all of their books on theoretical magic practice for those who found themselves to be particularly good at the art, though there were also many other books on fighting techniques, anti-siege tactics, etc. 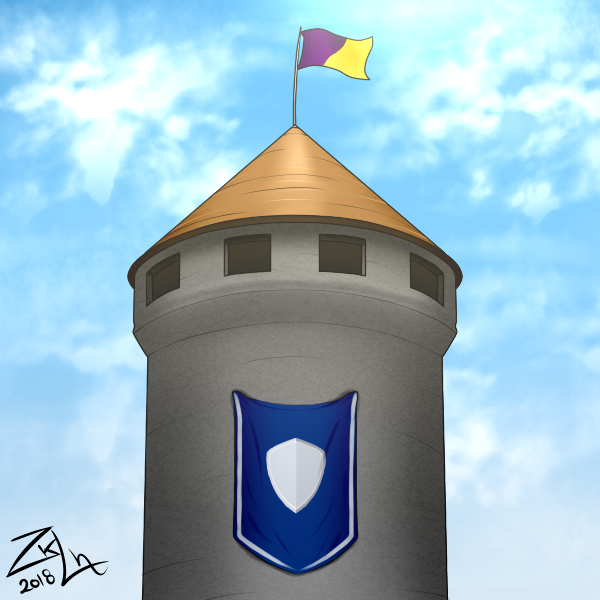 The first floor houses the soldiers, barracks with a few large rooms with enough space for 200 soldiers. This limit was filled a few years after the Wardens were relocated to the fort, and that was when the town really began to expand in order to house more of them.

And the second floor has a large meeting/war room and 20 bedrooms, which were once used by the Council and the other oldest and best veterans of war. These rooms aren't big, but sure offer more comfort than the barracks. The stairs to this floor continue up to a watchtower above, from where one can see incoming threats at the distance.

The entrance to the kingdom of Archana is protected by 4 layers of walls interconnected at their extremities, forming the shape of a diamond - where they got their name from. 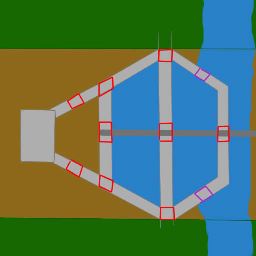 The outer wall "The Shell" was built on a river, using it like a moat. A stone ramp leads the path to the height of the gate, which is kept closed by a drawbridge. The ends of this wall are bent inwards giving its shape of the top of a diamond, and below each side are sluice gates (in purple) that control the flow of the water from the river into and out of the inner moats.

A narrow (for an army) stone walkway links the first wall to "The Core", the second wall, which was the first and the only one to be built back when the fort was founded, and before the Artalgnian Empire conquered Archana. It covers the pathway to the kingdom from side to side, reaching partially into the woods to eliminate the need of side walls, using the dense flora as a natural barrier. It used to be by the edge of a hill, above the ground level from those who come towards Archana - but with the construction of the other walls and the moats, it is now suspended like The Shell. And also like it, The Core has two sluice gates, separating the moats in front and behind it.

Another walkway leads over the last moat to the third wall, "The Body". Like the first wall, it bends towards the second, linking the three together. This was to be the final layer of defense, until "The Tip" was devised. This fourth layer was conceived to be just a bridge between The Body and the Fort, as a single and easy path to access the walls, but convenience demanded they used it to build the last two walls instead of simple bridges, closing the shape of the diamond and giving the Steel Wardens a good flat ward to make a last stand at.

All the walls have crenellations and machicolations on both sides, as to battle enemies who are approaching and those who have breached the gates. Gatehouses (in red) keep the invaders at bay at every junction: not only at the opening of each wall where the walkways go through but also at the top of the walls where the extremities of the three main walls connect and at the junctions of The Tip with The Body. The lower 5 gatehouses are built like it commonly was in ancient times: a large door of wood and metal with a portcullis to protect it and a murder hole. While the murder hole can be used to shoot arrows at those who try to break through the gate, the Wardens used it to rain Fire down on their heads, burning them to death. For this reason, while the door and the portcullis are mostly made out of wood, they have a thin layer of Adamant to protect them from being burnt by the fire. The upper gatehouses are smaller as siege weapons are virtually impossible to reach that far. The ones connecting The Shell, The Core and The Body do, though, have a peculiarity: they are 3 in 1. Each of the 2 gatehouses has three gates, one going to each wall, and all three gates have a portcullis on each side. Rope ladders on the outside, which are later removed, can take a few men to the top of the gatehouse to make use of the murder holes.

The stone walkways have a defensive functionality as well: the Wardens can use Earth magic to lower them into the moat, which they do before the battle begins in order to cut the path for the invaders. In time, Artalgne eventually devised ways to reach the next gatehouse, but the Wardens' engineers were prepared for this, which is why they filled the moat with water. With Water magic, the Wardens can drag their enemies into the moat and take them down in masses by blasting them with Thunder magic. This would eventually fill the moats with hundreds or thousands of dead bodies, which is why they were made with sluice gates, dumping the corpses into the river to be washed away.

Originally, the fort was composed of a single wall and a building with only a ground floor. After Archana regained its independence, Fort Edgemourn was revitalized with a huge upgrade: the main building was reformed and two more floors were added; the wall also received several upgrades, along with the construction of the other walls to create multiple layers of defense.

Fort Edgemourn was one of the first examples that helped solidify dwarven architecture aesthetics in Archana. It is big, bulky, angular and seemingly made of a single piece of stone carved to shape.

The fort, once having only a single wall that is now known as The Core, is 400 years old, built back when the Kingdom of Archana was suffering from the first attacks from Artalgne before it fell. While the construction of the Fort Edgemourn was a feat at its time, it didn't hold the enemy at bay for long. It was grand but its design was simplistic, and so Artalgne was able to press harder and eventually overcome the barrier.

Once Archana regained its independence, one of the priorities of King Charles Maine was to make sure no one would ever be able to breach through Edgemourn ever again. He assigned Cyrus Dunstan to the job, his chief engineer and architect, who studied and gathered knowledge for two years to design a fortress that couldn't be breached. That was when the Diamond Walls were conceived, together with an upgrade to the main building to accommodate more men.

While there were times these walls were nearly breached, since then, with the help and bravery of the Steel Wardens, no invader has ever been able to step on Archan ground.

Remove these ads. Join the Worldbuilders Guild
Landmarks in Archana

Answering: "Describe a building that was once a grand place, but is now ruined."
Visit Zeke Lionhart's Competition Page Check all other answers to this prompt Competition Homepage