"Guess what: it's short as a toddler and stubborn as a door."
— Aria Dabalan, the Bard


Dwarves are the result of generations of Humans working in mining and forging of stone and ores. As new settlements formed and civilizations rose after The Calamity, the fight for territory and resources grew through the years, and so did the need to build fortifications and manufacture weapons. A race to gather resources was on, and miners used Earth magic to speed up the work. This constant use of Aether in their daily lives changed the workers through the generations, giving them the qualities and characteristics of the element.

Dwarves have thicker muscle mass and bones, and together with their short size and wide silhouettes, this gives them a more square-ish and less curvy silhouette if compared to humans. Thanks to this bulky body structure, dwarves have a more stable stance. Dwarven skulls are flatter and a bit longer, following a more cubic shape like the rest of their body. Their hair can be red, brown or black, and are often long and wavy.

Dwarves' height varies around 1.3 and 1.5 meters, 3/4 of the human average. Despite their size, their wide and compact bodies give them a weight range similar to humans, often between 50 and 80 kg.

Following the pattern of their bodies, dwarves’ faces have a square shape and, in their majority, are adorned by great beards indicating their social status. The color of their eyes varies from green to amber, rarely going to darker colors.

Dwarves originated from generations of miners, therefore where there is stone, there are dwarves. This makes them the second most common race in Europa, behind the humans. They are common in most of the continent, especially in regions like Archana, Artalgne and Drakia, and a little less in Welfenbach. In Krenjor they are few, as they use wood more often than stone. In the eastern lands they are rare, but can be found in greater numbers to the north.

There are dwarves who live both among humans and other races, and those who live in isolation, only among their own kind, in settlements known as Citadels. The latter, though, is much less common.

Dwarves’ are used to the low-light environments of mines and caves, and so they can see a little better in the dark than humans, though it isn't anything much impressive.

Their strong connection to Earth grants dwarves greater ease in weaving this element, giving them an innate ability to feel distant movements and vibrations on land and tunnels, as a 6th sense. The more skilled ones can even perceive mass differences in walls in order to find ores, like some kind of ground-based “echolocation”.

The Hawkcliff Citadel is a great dwarven city-state annexed to the Kingdom of Archana. Also in the same kingdom, the city of Vilennor is famous to house the Craftsmen Guild, arguably the greatest cooperative in the world in the matter of crafting and smithing.

The reason for the dwarves to come to be is work, and so it has become an integral part of their culture. They honor honest work above most things and dedicate to it as the reason for a living. Thanks to that, their respect was guaranteed in human cities, where they proved to be a productive and trustworthy work-force.

They have a strong moral sense that is very noticeable in their daily lives - work is their purpose, honesty their path, dishonor their enemy. The effort a dwarf puts into their work shows their worth and character among their kin. This is central in their belief system, where stealing is a heinous crime with no chance at redemption.

Another thing dwarves are well known for is their long, fancy beards, and this is something that follows them since back when they were common humans. The life in the mines left little time for luxuries, many men gave up on shaving their facial hair and in time this became a symbol of wisdom. The bigger the beard, the more time the person spent working and improving their techniques. This notion made its way into the dwarven culture, and for that, they value greatly their beards.

There are three major branches of dwarves with different cultures: City, Mountain and Exiled dwarves.

As in their daily lives, dwarves are also disciplined in the battlefield and are known to be exceptional in combat. They are excellent at the frontlines, for they are strong and resilient, both physically and magically, with a stable stance - toppling a dwarf is a task not for anyone. And they make the best use of that by honing their fighting prowess and complementing it with the use of heavy armors, which not only can be thicker and heavier thanks to their strength but are also expertly crafted by their master blacksmiths.

Despite that, they are not aggressive people. They would rather sit and protect their Citadels than conquer and expand their territories. All the land they need is in the underground.

Dwarves were born from the use of Earth magic, so for that, they are mostly limited to it. They are almost unable to use Wind magic and have more difficulty trying to weave other elements. That limitation makes the use of magic pretty rare in dwarven society, being more common only in work environments and in the upper classes’ combat styles. Also, just like the earth itself, dwarves are naturally capable of absorbing magic more easily than other races.

Most dwarves believe that thinking about gods and religions is a waste of time. Whether deities exist or not, the subject doesn't spark any curiosity in most of them. They would rather seek the guidance of elders and the protection of the spirits of their ancestors than rely on gods that they can't even be sure if they exist.

Dwarven architecture is made entirely of stone, carefully worked in angular forms and put together in a way they seem to be a single, sculpted piece. The use of angular forms came from their work in the mines: it is a type of construction that is easy to measure, cut and transport, and efficiency plays a big part in the job.

This custom of using angles eventually leaked into other areas of dwarven work, and can also be seen in all other of their creations, making their craft unique and easily distinguishable.

Their high moral standards and appreciation for work earn them a great relationship with humans, making them an important part of their society. Mountain dwarves, though, are treated with more caution as they are secluded and rarely present themselves as allies in times of need, but are still considered friends to humans. Exiled dwarves are treated with as much caution as any other suspicious human.

The relationship between dwarves and Orcs is quite the opposite, as many times orcs wander through mountains, stumbling upon the dwarves. As both are always battle-ready and share very different points of view, a conflict between these races is almost certain once they meet.

But their real enmity is with the Elves. While dwarves are conservative, realistic and arrogant, elves are more liberal, religious and refined, making of them natural rivals. Such a difference of beliefs generates a lot of distrust between both races, to the point they often would rather not share the same room. Despite that, big conflicts between dwarves and elves are nearly nonexistent, as both races prefer isolation. 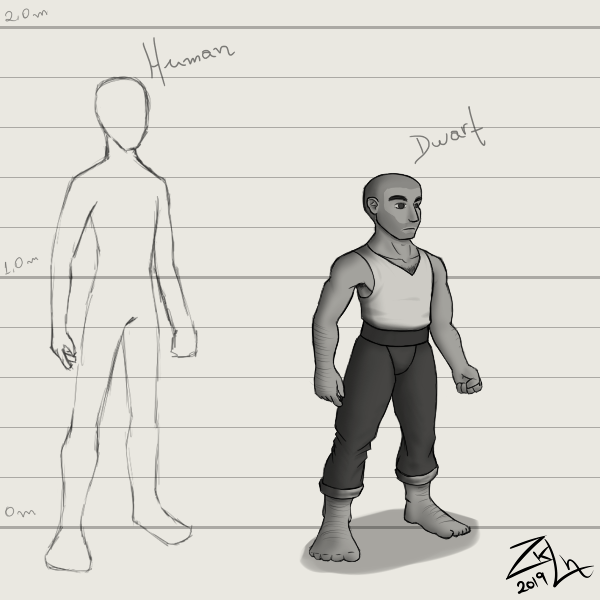 Element of magic that represents Reaction, tradition, and justice

Dwarven city atop the Bashmu Range