The tiny colossus of magic


"Who would have imagined a kingdom so small, so frail, could have fended off our troops over and over again. If not their ways with their profane 'Magic', we ought to at least admire their resilience and bravery."
— Victor Maximus, High General of the Artalgnian Army


Archana is a very small kingdom located at the north of former France, in what used to be the Lower-Normandy region. Despite its size, a mix of culture, hard work, and good luck have given Archana its spot as one of the wealthiest and most powerful nations in the continent. It is a safe haven for magic users and a shining example of resistance and perseverance.

Archana is officially an elective monarchy, although in practice it seems like a hereditary one. A King/Queen sits at the top, with noble families right below them, who have the power to influence political decisions and vote for new monarchs. Still, the Maines have always offered impressive candidates for the throne, rendering elections redundant - but whenever needed, the nobility may call upon an election to choose another successor to the throne.

Each of the cities, outside the capital, has a similar system on a smaller scale. Counts are hand-picked by the King/Queen to rule each city, and while the local people are able to voice their opinion on a successor, the ultimate choice is for the King/Queen to make. Smaller settlements are always under the rule of the nearest city.

This system was an influence of the Artalgnian rule over Archana that happened through nearly 200 years. Before the kingdom was conquered, its structure was much looser - each city had its own ways, while a leader at the capital would be nothing but a respected counselor to the others.

Since Archana was united under a single flag and refugees from other places started to arrive, their promise was to see that the kingdom became a safe haven for all magic users. That changed during Artalgne's rule, but as soon as they regained their independence, Archana's doors were open once again.

What Archana lacks in size and natural resources, it makes up for in a magical resource. Almost 2 decades after The Calamity, an expeditionary group discovered a vast cave complex at the east of the kingdom, where the city of Vilennor would later be built. These caves were overflowing with metals, rocks, and gems with magical properties, with which they used to create magic items for self-defense and exportation, guaranteeing their place among the wealthiest nations.

With humanity trying to rebuild what it had lost to the Realm Wars, many communities settled down and began anew. Most of them despised the use of magic, so those who were more accepting and/or dependent often saw the need to isolate themselves in smaller groups. Archana grew from one of these settlements and attracted many outsiders thanks to its openness about the subject.

In time, it grew into one of the most powerful kingdoms in Europa, albeit small, thanks to its use of magic, its natural defenses, and the magical resources they have found in the underground. This has guaranteed Archana not only a spot among the strongest kingdoms around but also turned it into a target for neighboring nations.

From internal struggles to wars against other kingdoms, Archana has managed to survive, but at a cost. Now it faces a new obstacle: political struggle. Due to recent events, the kingdom has been changing drastically - the King has been adopting a different stance in order to better prepare Archana for future battles and this is leading the kingdom into social and economic instability. At best, this may lead them further into the economic crisis, but at worse, if things continue this way, Archana might face a new civil war.

The Archani people are varied and multiethnic. Their majority are Humans, divided between the capital of Nouvemond, Hrastgar, Blackbourne, Vilennor and the Hub Lands. Vilennor also has about half of its population composed of Dwarves, though their influence in the city is much stronger than 50/50. They can also be found as the only residents of the Hawkcliff Citadel up in the mountains, with a smaller presence in Blackbourne. Elves are the native residents from Springdrop Sanctuary and can be found here and there throughout the kingdom, with greater numbers in Hrastgar thanks to the Traveling Notes, a college for bards, though their total numbers in Archana is still very small if compared to the other races.

Unbeknownst to the common folk, there are Drow living in the underground of Blackbourne, as part of an assassin order by the name of Silent Blades. Also, there are a few other races that can be seen roaming the ports of Blackbourne and Portbail, though they are mostly passersby from trade routes.

The main body of the Archan Territory is called the Heartland. This is everything contained within the arc formed by the Bashmu Mountain Range, and that was the only territory belonging to Archana for most of its history. Recently, the Hub Lands, the peninsula next to the Heartland, home of the Rovers, was annexed to the kingdom. There the crown's influence is currently limited, as the geographic barriers hinder access to the region and the crisis demands the King to turn his focus to the most important territory.

Currently, Archana does not hold any significant military power. On land, there were the legendary Steel Wardens, but the order has been disbanded for a decade now, as King Abraham II claimed they were unnecessary now with the war over and the Arcane Development Program. On water, the Blackbourne Bay was heavily protected by the rovers, master of the sea. But the deal they had was also broken, and they are not allowed in the bay anymore.

The Church of Tiamat's Way is Archana's official religion. It sprang from the Light of Tiamat, an Artalgnian religion, after Archana regained its independence. Both religions share similar bases, but the original is intolerant to the use of magic, while its branch has been adapted to the archani's needs and beliefs that magic is a good and natural resource to be used.

Archana doesn't have many friends in the neighborhood. Its worst foe is the Artalgnian Empire, which has been trying to conquer them for 400 years - and they did succeed for 200. For the past decade, they have been at peace, but there is no telling until when the truce will last.

Krenjor has tried to invade Archana a few times as well but has never succeeded. Either the rovers were there to stop them, or internal crisis forced them to retreat, but they are surely still a threatening foe that could prove even stronger could they unite their forces. And Welfenbach has never bothered Archana directly, but it is an international concern how they keep slowly expanding their territory and no one has been able to stop them.

Flourishing with the best of Archana, Nouvemond is the capital of the kingdom, its first settlement and the pride of its people. Large stone buildings and decorated streets mark the city in a display of royalty and elegance. Nouvemond represents the standard Archan culture, with a few influences left from the Artalgnian Empire.

The famous City of the Miners, Vilennor stands by the base of the Head of the Serpent, serving as an entryway to The Veins and its treasures. It houses the Craftsmen Guild, where the metals, gems, and minerals collected from the mines are worked into all sorts of usable material and items, to be sold later at local markets or exported to other nations. Vilennor is also known by the high percentage of dwarves among its population, and the impact they have in its culture.

Blackbourne is the famous and infamous port city of Archana, the exit point for goods produced at Vilennor and the entry point for every other goods the kingdom can't provide for itself. Although so much wealth goes through Blackbourne, its poverty rate is very high due to social instability in the city. Along with this, the presence of pirates who used to have legal shelter in the city makes of Blackbourne a crime-ridden spot in Archana.

Heroes, songs, glory, and tradition are words that mark Hrastgar's identity. Ever since the days Nouvemond waged war against them and to this day, the people of Hrastgar have shown many times their strength and bravery in battle. Most of the soldiers that made up the ranks of the Steel Wardens were from Hrastgar, which was once the organization's home as well. This city stands at the center of Archana, where many roads meet, and for that, they receive many travelers on a daily basis from which their bardic culture takes full advantage.

Edgemourn is now a ruined small village, a shadow of its former glory. Fort Edgemourn, which lent its name to the settlement, was built on the eastern border of the kingdom, the only part of the border that is not protected by the Bashmu Range, to block the entrance to Archana. With the Steel Wardens moving to the fort, the town grew around it as to provide a better stay for them. But as it grew with their presence, it was left to ruins with their disbandment. Now Edgemourn in inhabited only by a few families that refuse to leave, while the rest is mostly crumbling away, a scar from the battles of the past.

The City of Dwarves, Hawkcliff is located at the Bashmu Range, at the top of a mountain by the same name, overlooking the entire kingdom. They are mostly politically independent from Archana due to a diplomatic agreement they've made with the kingdom in order to join forces. As a Citadel, Hawkcliff is an underground city built by dwarves and run by dwarves. They value discipline and honor, to the point that even the common citizen might seem militarized in the eyes of an outsider.

Hidden among the forests west of the capital, Springdrop is one of the few elven Sanctuaries open to outsiders, or even to have its location widely known. It is a famous touristic spot thanks to its beautiful location and exotic architecture.

Once known as Esperbrook, this town used to be Archana's main agricultural center. With the expansion of the Blightwoods, Esperbrook was eventually caught and decayed, forcing its inhabitants to flee to other settlements. Now lost deep into the woods, Grave's Hollow is a crumbling nightmare for all those who fear the neverending growth of the Blight, its history lost in the people's mouths.

A port town located at the western coast of the Hub Lands that, like the rest of the region, was annexed to Archana recently when Krenjor left its outpost behind. The kingdom has nearly no influence over Portbail as the hard access to the peninsula makes a direct government pretty hard and the recent political crisis has forced the King to step back and reassess the situation. The heartlanders don't hear much about Portbail, but words of mouth say it is the land of pirates and debauchery, something much worse than the current situation of Blackbourne. 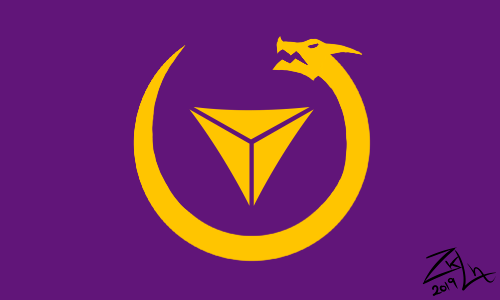 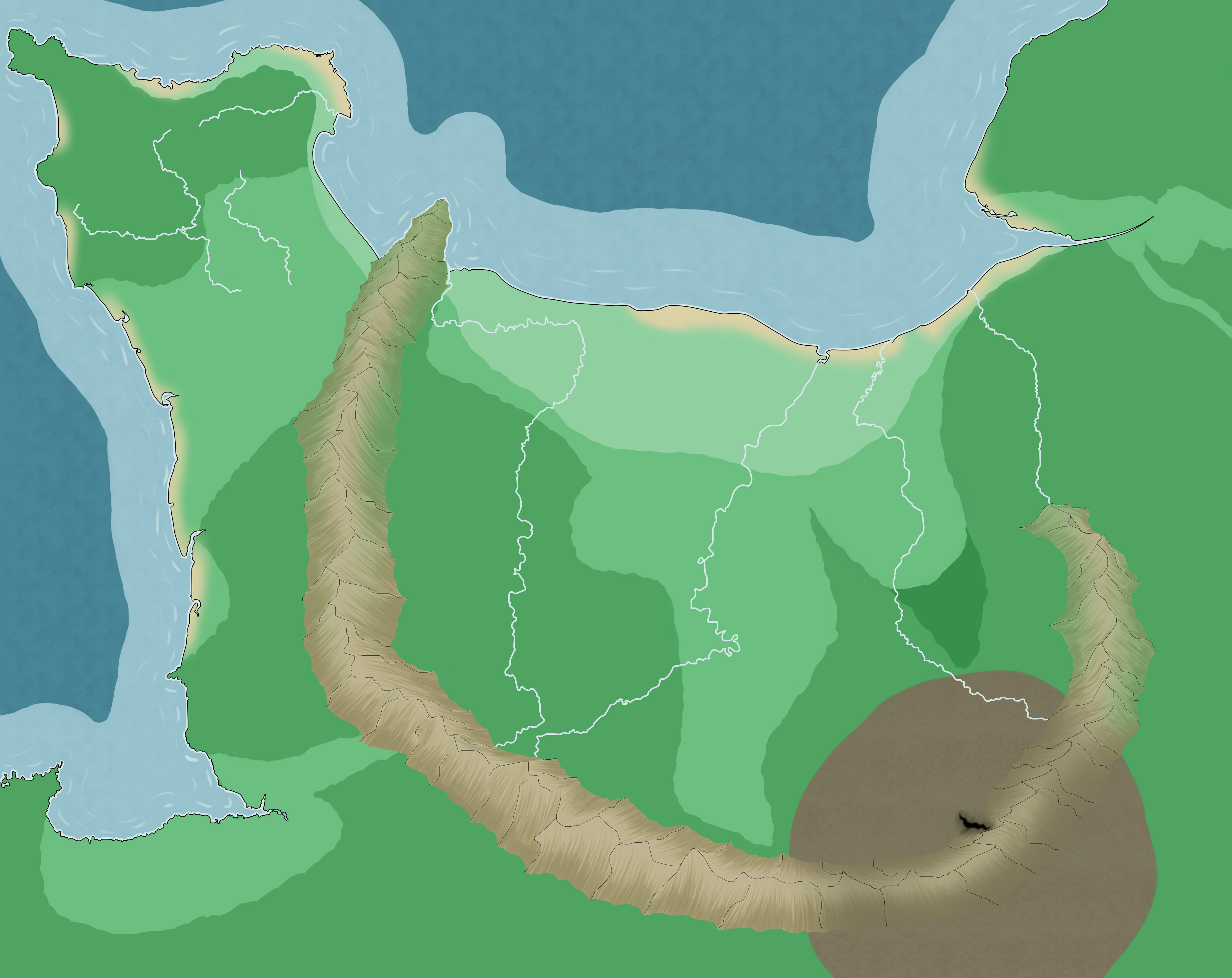 Map of the Kingdom

Current ruler of the Kingdom of Archana

A triangular symbol recurrent in the culture of Archana

The land of magic and wealth


Remove these ads. Join the Worldbuilders Guild
Organizations in Archana

Answering: "Write about an ancient kingdom, nation or empire in your world."
Visit Zeke Lionhart's Competition Page Check all other answers to this prompt Competition Homepage