Vost, officially The Vosti Empire is a small country on the eastern island of Abravost. While it once controlled the entirety of Abravost, it is now the smallest recognised country, and is considered to be in its death throes by many outsiders.

Zaloren has prophesied a massacre tomorrow in Shawa. I pray to the divine that it is we who are the executioners.
— Anonymous Vosti Account, circa 600 BC

The Vosti Empire got its start with the Vosti tribe, native to the large bay in the south of the continent. They were among the first to develop written language, and for a time considered themselves to be the favoured people of the god of knowledge.   This changed after Zaloren, an ardent follower of the god of justice, came to be in charge in the 600s BC. Under his control, which he claimed was divinely mandated, the Vosti came to unite with their close neighbours and heal rifts which had sparked in the preceding decades, before turning their gaze outward. Their expansion northwards across the continent was swift, with many northern tribes voluntarily joining with the conquerors.   The western lands were far harder to conquer, and conflict with the Skarhan people lasted many decades. Zaloren would not live to see its end, passing in the mid 500s. Upon his death, he was formally known as Zaloren the Conqueror.   In an effort to be more connected to the outlying reaches of them empire, and to project an image of being 'ethnically neutral', later rulers would begin construction of Fovenis, a grand city along the largest rivers in the continent. In spite of this, many knew that the cultural capital of the empire was Shonyul, a Vosti city which had been inhabited for centuries.

Shonyul would become the defacto capital after The Collision, which split the continent, brought elves to the human plane of reality, and utterly destroyed the city of Fovenis. The Empire lost huge chunks of land overnight, as its western regions seemingly disappeared and swaths of elves clamoured for aid.   The land east of the mountains were formally designated an 'elven territory', owing to its concentration of elven landmarks, and would come to be known as Waal Zaimyatl. While the people of the empire grew friendlier towards the elves, the nobility did not, and their harsh rules and lack of care caused a lot of conflict. In 106 AC, Waal Zaimyatl declared its independence, forcing a short conflict. Due to their natural defences and the weakness of the Vosti Navy, the Empire was forced to concede defeat in 107 - the first of many blows to the Empire's glory.   The second such blow would come with the arrival, or return, of the Republic of Skarhu in 142 AC. While the 'recovery' of Skarhu caused much initial delight, this quickly faded when it became apparent that during their physical isolation from the rest of the continent, Skarhu had formed an independent republic. Already furious at the lost of Waal Zaimyatl, many saw the independence of Skarhu as a mistake which must be remedied. Tensions quickly grew between the two countries.   Any ambitions for reconquest faded shortly after the arrival of the Skarhan President in 143 AC, who came with a full fleet of war and merchant ships to show her country's might. Trade deals were struck, and Skarhu remained fully independent. The Empire seethed, but the continent as a whole settled into a century long peace, marred only by minor conflicts and misunderstanding.   Things vastly improved with the development of Planar Magic, pioneered by Waal Zaimyatl, which allowed for the creation of portals. The Empire was the last to formally adopt the technology due to their feud with Zaimyatl, though its northern reaches were well known to have informally used it for many years.

While the Empire had been on the decline ever since the Collision, it was The Separation which kicked it into high gear in 326 AC. True to its name, this event permanently disentangled the elven and human planes, severing communities. Portals, which had relied on the entanglement to function, twisted and morphed their surroundings as they disappeared. Most importantly to the Empire, the Imperial family was decimated, as the Emperess and her family had been attending an event in the elven realm and were stranded. Without leadership, the Empire descended into chaos.   From this chaos came Emperor Treveon I, a high ranking military official who married the woman who was believed to be the closest successor to the lost imperials. In spite of the fact she was actually the Empress, it was Treveon who held power and declared himself to be in control. This, in and of itself, was not much cause for alarm, as the people rallied around the stability he claimed to bring. But as Waal Zaimyatl began to seize land across their borders, and as the military began to enforce total control over citizens far away from the conflict, tensions mounted once more.   The tension snapped in 330 AC after Treveon announced he had adopted Brimeon, another military commander, to serve as his heir. This break with long established tradition, coupled with increased persecution for the existing elven populace, forced the hand of the northern territories. A distant relative of the imperials, Duke Dravulean of Sinofis, rallied his citizens to rebel, sparking the Vosti Civil War. Each side claimed to be the true and legitimate heir to the Empire's glory.   The war began decently for the Empire, as it held its eastern borders and worked to contain the northern rebellions. This slowly changed as the north struck an alliance with Waal Zaimyatl, ensuring that the Empire would be fighting a united force on two fronts. The claiming of their southern islands by Skarhu also damaged the Empire harshly, as it forced a war on three fronts. After a devastating naval engagements that resulted in decisive Skarhan victory, all Vosti ports in the south were blockaded, in tandem with an increase in shipments of goods and resources to the Waal Zaimyalkee and northern forces. The Skarhan-Vosti war ended in 331 AC with Vost ceding all island territories, not just those in their southern seas, to the Skarhans, in exchange for freeing up their ports and remaining neutral for the remainder of the civil war.   Aside from a series of brief victories in 333 AC, which included the death of Duke Dravulean during the Siege of Robardon, the Empire lost large swaths of land. Peace came in 336 AC at the urging of Prince Brimeon, as well as the request of the Duke's son, with the north being declared the independent Kingdom of Telziad.   The Empire has been ruled by Emperor Brimeon IV since 402 AC, and little has changed. Elves continue to be treated harshly, and animosity towards the northern Telziado rises with each passing year. And while none of the attempts on the lives of the Telziado king and his heir have been formally linked to Vost, it is considered common knowledge that either the Vosti military or a well-known Vosti-loyalist gang were involved.

The Empire is an absolute monarchy, and was formerly split into a number of duchies which answered to the Emperor. While this is still theoretically the case, the smaller size of Vost in the modern day makes such delegation of power unnecessary, and the Emperor is fully in control. Some power is still delegated to powerful allies, chiefly Duke Hintero on Shonyul, who is second only to the emperor in how much control he wields over the country. At present, the heir to the throne is the young Prince Zaloren, though it is expected Brimeon IV will adopt a military official to be his successor, in keeping with post-separation tradition.

Vost is a human-majority country, with only 14% of its citizens identifying as elves. This may exclude some half-elves or their descendants, who are a large percentage of the elven population in the empire. Most elves are Zaimyalkee, with a small number of the northern Suungkee (usually as half elves).   Amongst humans and half-elves, many are ethnic Vosti, at around 70%. The next largest group as Telziado, many descended from pre-civil war inhabitants and imperial loyalists. There are a notably amount of Skarhan citizens, though far less than their northern neighbours. To the knowledge of the authorities, there are no permanent citizens of Lialpumpámtii or Kailkoseltii descent, owing to geographical distance from the former and historic tensions with the latter. 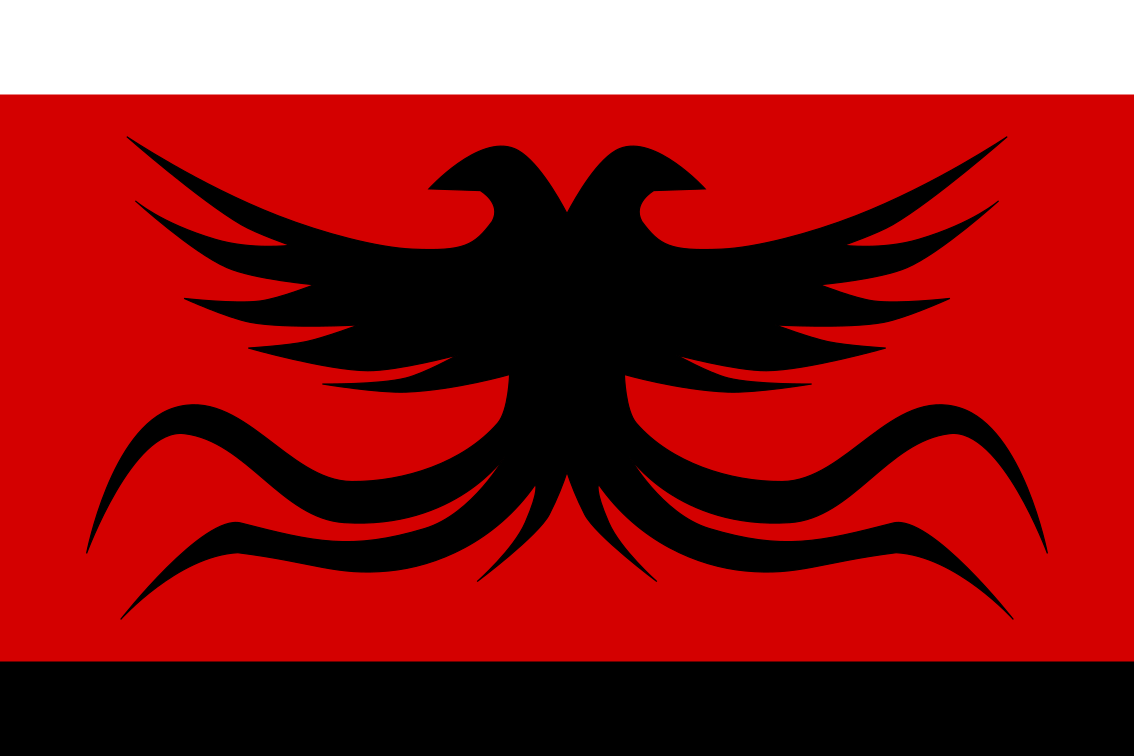 The Reigning Dynasty in Vost

The kingdom in northern Abravost

Abravost
Open full size
The Vosti Empire is the smallest country in Abravost, in stark contrast to its former expanses. They possess no notable island holdings, though this is a fact in dispute. The islands not far south of Vost are still claimed by them, in spite of having formally ceded them in 331 AC to Skarhu. They also previously possessed the islands north of Telziad (as part of the empire), which they ceded in the same treaty and which caused dispute with Telziad about whether they were allowed to do so.   By far the largest dispute is over Fovenis Lake, the historic seat of power in the Empire. In the treaty which ended the civil war, the northern bank was granted to Telziad. Confusion persists over the status of the eastern and western banks, with Telziad presently claiming all of the east and parts of the west. Vost, naturally, claims the entirety of both.

Due the Empire's unique position of being the former possessor of all land in Abravost, they are necessarily a major feature of Abravosti politics.

The flag of the Vosti Empire consists of 3 main elements - the white and black stripes at the top and bottom of the flag respectively, the red background, and the two headed saval which acts as the charge. The white stripe at the top represents the heavens and the Divinities, while the black represents the dirt, soil, and the territory which the Empire possess. The red background symbolises the blood spent in conquering Abravost. The two headed saval is the national bird, and is commonly seen to represent both justice and the Vosti people as a whole.

Articles under The Vosti Empire

A set of magically infused armour, made for Emperor Treveon II