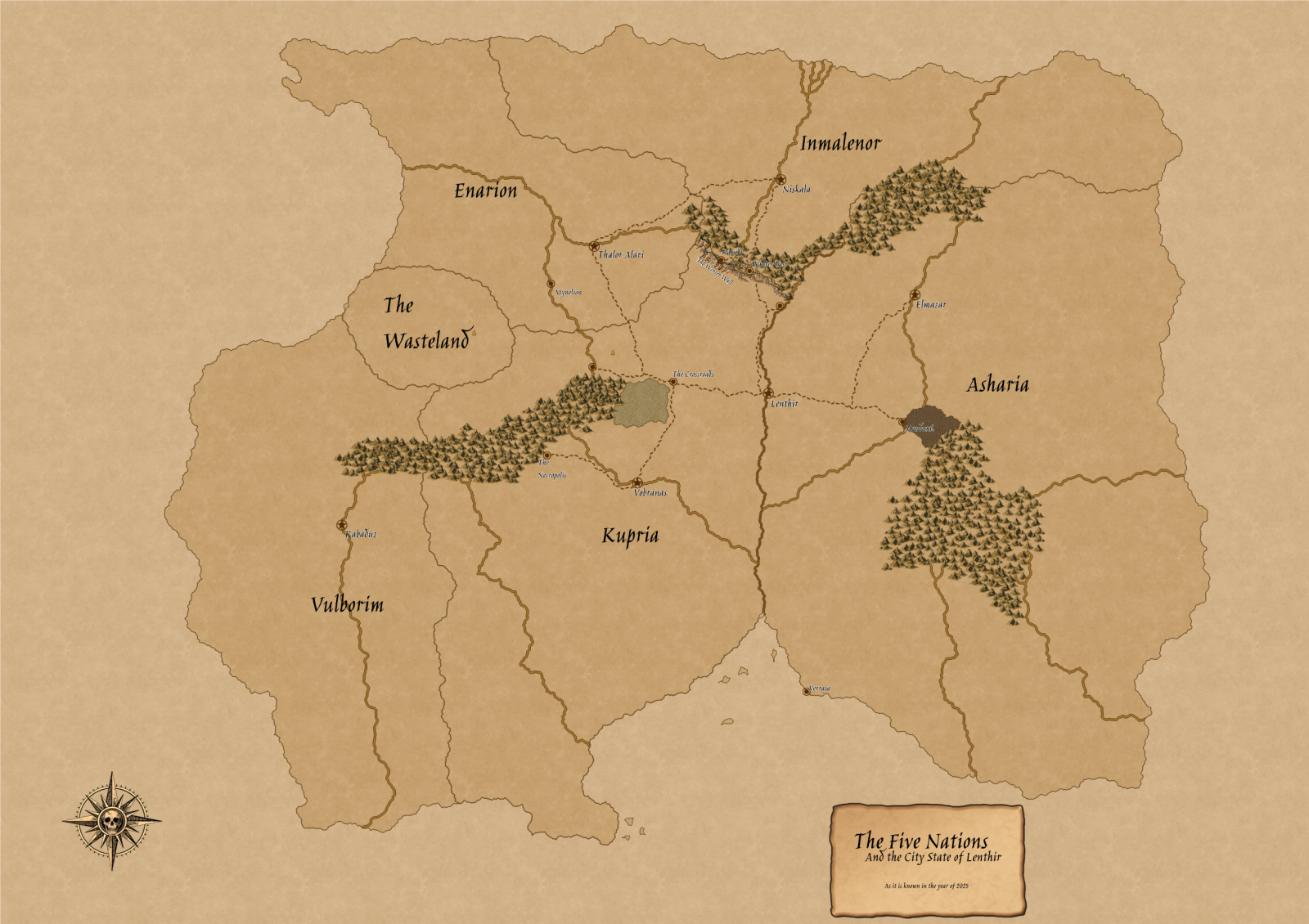 Shireon is the only known continent in the world. It is calculated to cover about 5% of the whole planet. Surrounded by especially treacherous waters, the continent is isolated from the rest of the world until someone comes up with a clever way to cross the seas without being eaten by the Sailor's Nightmare, which has a habit of dragging whole ships down into a wet, dark grave.

Main article: Kael Thalori
The vast forests of Kael Thalori covers most of the nation of Enarion, and some parts of northern Kupria. It contains the cities of Thalor Alari and Mynelion, as well as the tree Akrimmon. It borders the Northern Grasslands in the northwerst, the Wasteland in the south, the Great Plains in the southeast, and the Frozen Mountains and the Northern Taiga in the east.

Main article: The Great Plains
The Great Plains stretches from the Wasteland in the west to the Asharian coast in the east, and borders to the Frozen Mountains in the north. It's a rather flat area with good conditions to grow crops, and although the winters are a bit longer than they are further south the summers are long enough to grow several types of temperate plants used for food. The cities of Lenthir and Mandural both lie in the southern parts of the Great Plains, and the small town of The Crossroads is in the middle of the western part of this area.

Main article: The Wasteland
The Wasteland is an area where next to nothing grows, and the ground is dry and cracked. For the last two millennia, the area has been devoid of life except the Wasteland Beasts - vile abominations that are terrorizing the southern parts of Enarion. How the Wasteland came to be in the first place is unknown, but some suspect it has something to do with the arrival of the Elders two thousand years ago. The Wasteland borders to Kael Thalori in the north, the Great Plains in the east and the Drylands in the south.

Main article: The Midlands
The Midlands is an area of Kupria between the Great Plains, the Southern Coast, the Drylands and the Thauros Spine. This is considered the heart of the nation of Kupria, and notable places are the city of Vobranas as well as The Necropolis.

A large region in the southwest of Shireon, where the northern half is dry steppes and the southern half is a scorching hot desert. It marks the territories of the nation of Vulborim.

The Drylands borders to the Wasteland in the north, and the Midlands and the Southern Coast in the east.

Main article: The Northern Taiga
The Northern Taiga is a vast area in the northern part of Shireon where most of the ground has permafrost, and some areas has a permanent layer of snow most years. It borders with the Frozen Mountains to the south, and covers the nation of Inmalenor and the northernmost part of Asharia. Both the city of Niskala and Elmazar are in this area, although in different areas.

Main article: The Frozen Mountains
The Frozen Mountains is a tall mountain range running along the southern part of the Northern Taiga, bordering to Kael Thalori in the west and the Great Plains in the south. The steepest part is called the Winter Wall, and lies on the border between Kupria and Inmalenor. The tallest peaks of this mountain range are permanentl covered in snow. The small settlement of the Winter Pass and the ruins of Kassila lies in these mountains.

The Peaks of Heaven

Main article: The Peaks of Heaven
In the middle of Asharia there is a mountain range called the Peaks of Heaven. Geologists are puzzled about how these mountains came to be in the first place, since there are no geological reason in the form of plate tectonics or the like to make sense of the mountains.

Main article: The Southern Coast
Running along the southern coastline of Kupria and Asharia, the Southern Coast has a tropical climate, and is the only part of Shireon where there is any seafaring of note. The Sailor's Nightmare doesn't enter the waters in this area, so seafaring is relatively safe. The town of Verraja is on the Asharian coast in this area.

Stretching such vast areas and including so many different biomes there is a wide variation of flora and fauna on Shireon.

A large region in the southwest of Shireon, where the northern half is dry steppes and the southern half is a scorching hot desert. It marks the territories of the nation of Vulborim.

Stretches from the Wasteland in the west to the Asharian coast in the east, and borders to the Frozen Mountains in the north. A rather flat area, perfect for agriculture.

The Result of some Cataclysmic Event

Answering: "Write an introduction to the geography of your world. (Optional: share a map!)"
Visit milladamen's Competition Page Check all other answers to this prompt Competition Homepage

Although I'd made this article before the Summer Camp, only some of the headers for the different geographical areas were written before the event (about 144 words).