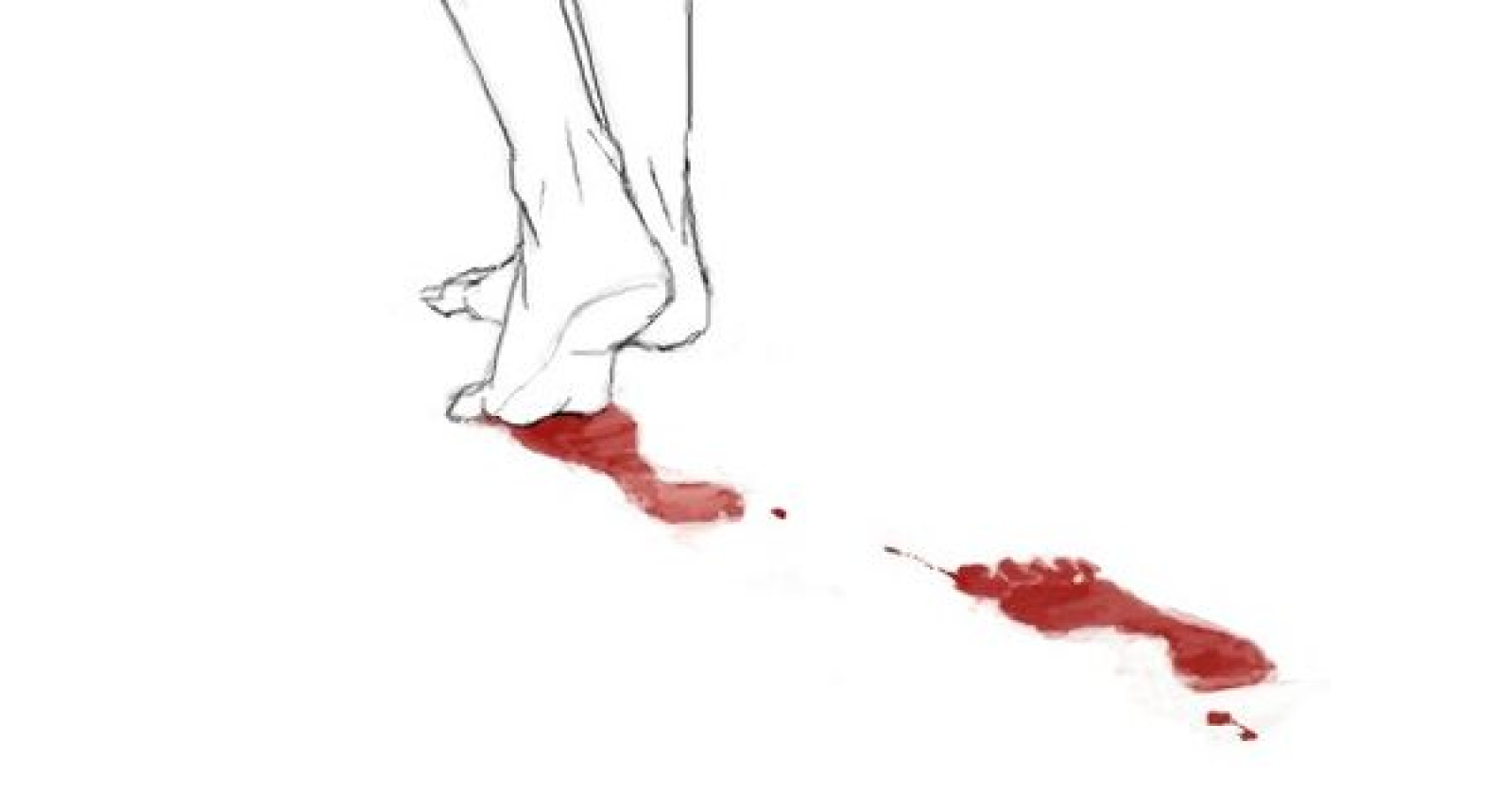 "We saw an opening and we took it, simple as that. If we hadn't stepped on them, if we had slowed down, we'd be just as dead as them. We walked away for good reasons, and the Generals won't forgive us for that? Fine. But I'm not going back. WE, aren't going back. If walking on blood is what they hate, Blood Walkers is what we'll be." Paradocleth's speech upon founding the Blood Walkers Marauders.

The brigand army commonly refered to as Blood Walkers operates in the north-western reaches of the Verdant Steppes. Their name is tied to their origin as deserters who trampled their brethren to escape, their footsteps staining the soil with blood.   It is believed that they have their headquarters deep inside the Fana Forest, but expeditions have failed to root out their nest. They count over a thousand members, making it the largest group of marauding bandits in the region. Most of their members are "acquired" from Demon Legion deserters or prisonners. There are also reports of several dozen non-Demons serving these bandits as slaves.   While most Marauder gangs are satisfied with an occasional ambush of caravans or stealing supplies from farming communities, the Blood Walkers have grander schemes in mind. They keep a close ear on any achievements the Empire's Legions have earned, and go to collect the spoils of war on the tired victors. Three times they have made successful raids, though the fourth ended with drastic losses on their side. The Walkers have kept silent in recent years, vanishing without a trace. It is difficult to say if its members have rejoigned Imperial society incognito or if they still bide their time at their home base.

"Th-They are not... just a hungry band. Blood Walkers can be considered... well... a new player at this point. So... we should eliminate them as soon as possible?"

Governor Mako Dalath arguing the Marauders threat to the region.

Blood Walkers hierarchy is based on the ranks the members once held when part of the army, with a few exceptions. Former officers who retained the trust of their men become officers in their banditry. From five main groups of deserterers stemmed the five groups that form the Blood Walkers. At the top of the chain seats a Council, with five councillors each in charge of their own groups.   Save for the Blood Heads and Blood Hands, the five total brackets are headed by an Archdemon. The lower echelons of commands mimick those of the Demon Legion; Five-man squads (Manuth) belong to Ten-man squads, who belong to hundred-men (Armuth) squads who can belong to thousand-man commanders (Torsuth), should the group size allow it.   Seen below are the five sections forming the Blood Walkers organisation.

They are the founding group directed by the so-called General Paradocleth. First called BLood Walkers, they have been renamed after the group grew in size and organised itself into diefferent companies. They have 248 soldiers, most of whom are aging veterans.

301 soldiers form this sub-group. The contain the braver elements who head into the Eastern Realm despite the distance to secure supplies and fresh slaves from the unsuspecting soldiers retreating from battle with the Empire.

Lead by Lady Dyonella, a female Archdemon of non-Legion background. They assist in raids, but mostly hang around the headquarters improving the living conditions there. With 124 soldiers, they handle logistics, the soldier's desires, and they discipline the slaves.

Despite the name, this group was formed ten years ago. With 410 hot-headed soldiers, they handle small raids despite the dangerosity. Considered cannon-fodder by the other groups.

Lead by the "strategist" Peristotle. With 206 soldiers, this group scouts the Forest and the roads. They also handle the stewardship, the exchange of goods with the exterior, and the information network.
In addition to their warriors and artisans, the Blood Walkers have acquired multiple slaves on their raids who have served them for years. In the early days, the slaves both Human and Lega were persecutted and exploited without mercy. New slaves have become extremely rare in the region however, that is why these laborers have been revalued as precious resources for the gang.

Over the course of its decades seperated from "proper" Imperial culture, the Blood Walkers have developped a more vicious and violent lifestyle.

"You should not have done that. You knew. You break the Code, the Code breaks you back.
A Blood Walker officer about to arrest a rule-breaker.

The Blood Walkers have not fully given up on the web of traditions and obligations to their fellow Demons. Surviving the Fana Forest requires a modiccum of discipline not only in battle but also in everyday living. Thus, the numerous squad leaders also act as Arbiters making sure their subordonnates follow the rules. The higher ups make sure that the lower ups make sure that no-one goes too far in their actions, following the Gang's hierarchy.
While petty matters are less frowned upon than in the Empire, the heavy crimes of murder, assault or theft are still considered consequential as they could jeopardize the unity of the gang. But the greatest difference with the Empire's law is that the death penalty is allowed. After all, they do not have access to the tools necessary to enslave criminals magically. A Blood Walkers' life is a thing of low value, and they better enjoy it while they can.   The primary rules of the Blood Walkers are simple concepts with many implications, a simple Code sculpted into a big weathered stone serve as their oath of conduct. Enforced at all times, they are as follows:

As renegades from the Empire, most who belong to the blood walkers are hardened criminals and murderers who cannot rejoin society without being judged and condemned by the wrath of the Ortho Legion. Knowing this, these battle-hardened Marauders must maintain and enhance their emcompments in the Fana Forest, while being ready to rellocate every so often. As a result, they need to keep gathering supplies; not just food, but the necessities for proper settlements.

Blood-Walkers strive for self sufficience, for a life of free carnage with bondage after the acts. Despite the dangers surrounding them, they have grown accustomed to living with the flow. They count both the Demon forces and Forternian slave-freeing forces as their enemies, and are on the lookout for any advantage to their precarious situation. Their greatest objective is thus to keep growing stronger in numbers and individually.   The recent Battle of the Cleaving Hills saw the victory of the Demon Empire and the capture of valuable Human Heroes that have been indoctrinated into captivity and slavery. Such prize so close to their grasp is one the Blood Walkers cannot ignore, and they have made preparations in response.

Being veterans of battle and survivors of the dreadful depths of Fana, the Blood Walkers are almost all efficient warriors in a constant threat of starvation and Mana Fatigue. They count almost exclusively Hellions in their ranks, the Archdemons being the officers thanks to their physical and magical advantages.   As they live in the very depth of Fana, they have easy access to fruits, wood, and monster parts at the cost of constant danger and a need to relocate according to the migration paterns of Fana Monsters. This harsh life allowed a good amount of them to evolve from Hellionsinto Archdemon. The group's death rate declined with each evolution, and their overall forces was greatly improved.   Blood Walkers are well supplied, they have assigned blacksmiths, leatherworkers and woodsmen who double as soldiers. The Imperial education system grants them semi-independance from professionnal artisans. They take good care of their weapons and armor, though forging new ones is a challenge.   On the monetary aspect, Blood Walkers have managed to accumulate large amounts of gold, jewelries and precious stones from Dwarven merchants headed towards the Eastern Realms. Money is a non-issue to them, as they get their essential supplies of wood and food from the forest. They are, of course, still dependant on their contacts in the outside world for alcohol, milk, and other farm goods.

"Traitors!"
"It's been 25 years... Find a new insult, goon."
A Blood Walker replying to an Ortho Legion pursuer.

During the loss of Oveny to the Fortern Kingdom, Legion survivors broke rank and abandonned their comrades in arms to the fury of the emboldened Human army. During the night after one of the walls fell, they ignored orders and trampled over the corpses of their brothers-in-arms. This act supposed to be the root of the name, heavy snowfall covering their blood-stained flight.   At first made up of roughly a hundred men and a few officers, they gathered near a ruined sawmill on the edge of the Fana Forest's edge. Here they took a decision not to return home to the Demon Empire where slavery for desertion awaited them. A life of brigandry would be their fate.

Over the years, they harassed both Human and Demonic travelers for supplies as they built a secret encampement within the treacherous forest. Their numbers swole steadily every few years when the Legion fought in skirmishes and lost a few weak-willed recruits. They also managed to capture slaves the Legion itself had acquired before they could reach the western parts of the Verdant Steppes. Human and Lega workers now power their communities with their labor.

We are Stained, yet we Live

Two Armuth companies of Demons flee the battlefield through a corpse-filled oppening, letting the fresh blood mark their feet as they fled through the snow. They keep escaping eastward until reaching the Fana forest.

Afterwards, they spend the first two years creating a base emcampement within the forest, but there is a lot of casualties in these early days as deserters.

The next ten years of their existence saw their activities in the north extend over a larger area. It is around this time that the New Blood group was formed.   While increased encounters with Ortho Legion pursuers ended up costing lives and resources, their numbers still rised steadily. Most of their new recruits came from Mako Marith's Battle-School, from angry students who left the confines of the military life for a more adventurous life of crime among their idealized Blood Walkers heroes.