The Realm of Unity

The sunlight with no apparent source is focused on the cluster of floating islands, hanging suspended in the air as if they had been ripped from the earth and thrown into the universe, left there to dangle forever.   If you look beyond the isles, only endless black will meet your eyes. Nothing else is out there, not even stars.

Alahon is a part of the Fae Realms and can be classified as the bridge between the fae realms and the Human Realms. The human realms are often referred to as "the real world", but the fae realms are just as real, though they were created using magic. Each type of Fae have their own specific realms; Alahon is the realm where all Fae unite and meet under one banner. Most portals from the human realm go straight to Alahon, where there are additional portals to the rest of the fae realms.

Most humans who find themselves in Alahon are often frightened to the point where they might even pass out. The floating islands found in the dimension defy everything they've ever seen before. Those who suffer from fear of heights are usually most susceptible to fainting.

The realm of Alahon only has small amounts of land area, the rest is endless nothingness. There are 18 big islands suspended in the air, as well as several smaller ones. The bigger islands are connected with bridges, most of which are suspension bridges.
The 18 islands consist of: 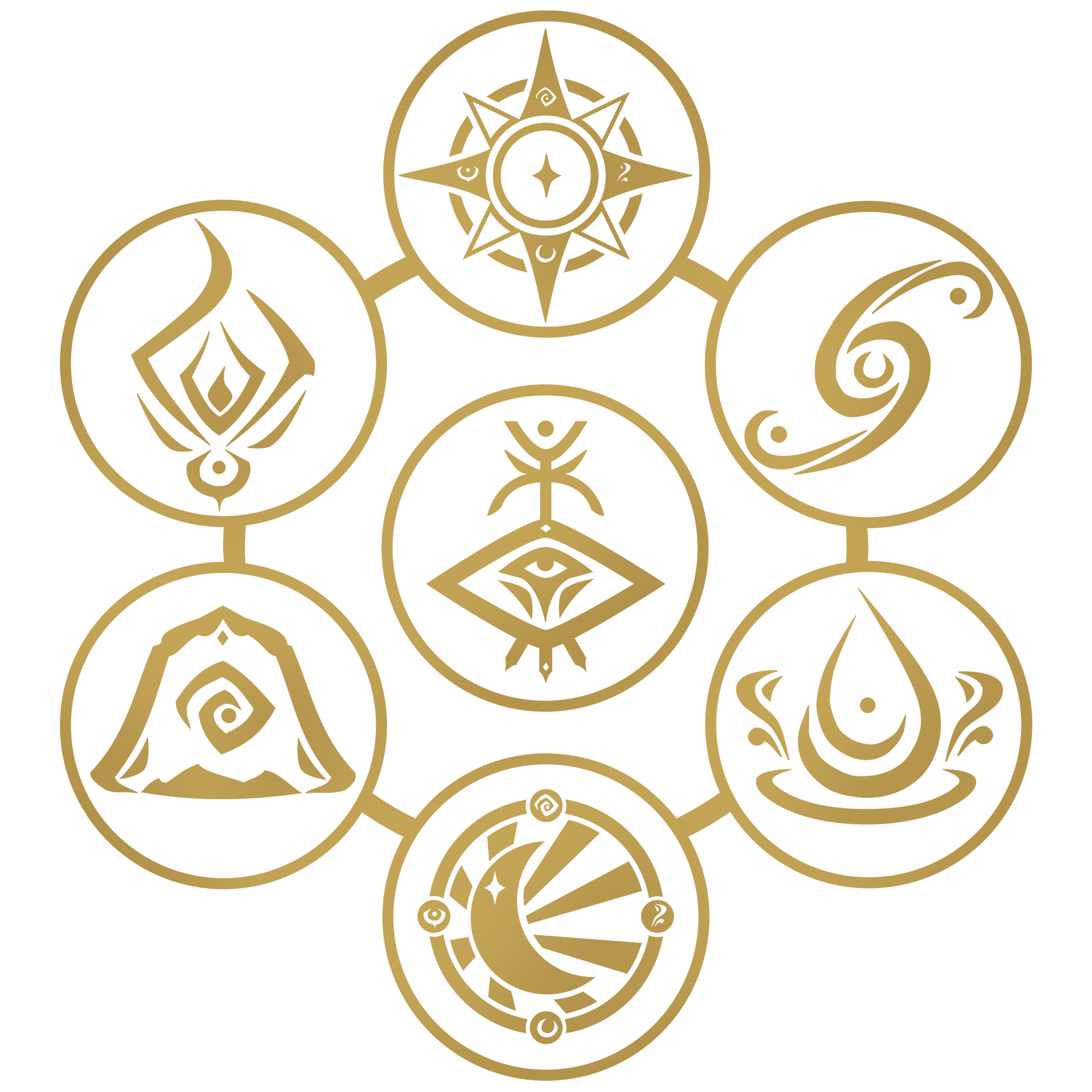 The climate on the islands varies greatly, as the fae who moved them there decided to keep the temperatures and weather from the place they took them from. This is done with varying types of magic held in place by The Runestones of Alahon, which are regularly embued with new magic so that the spells bound on to them will hold. 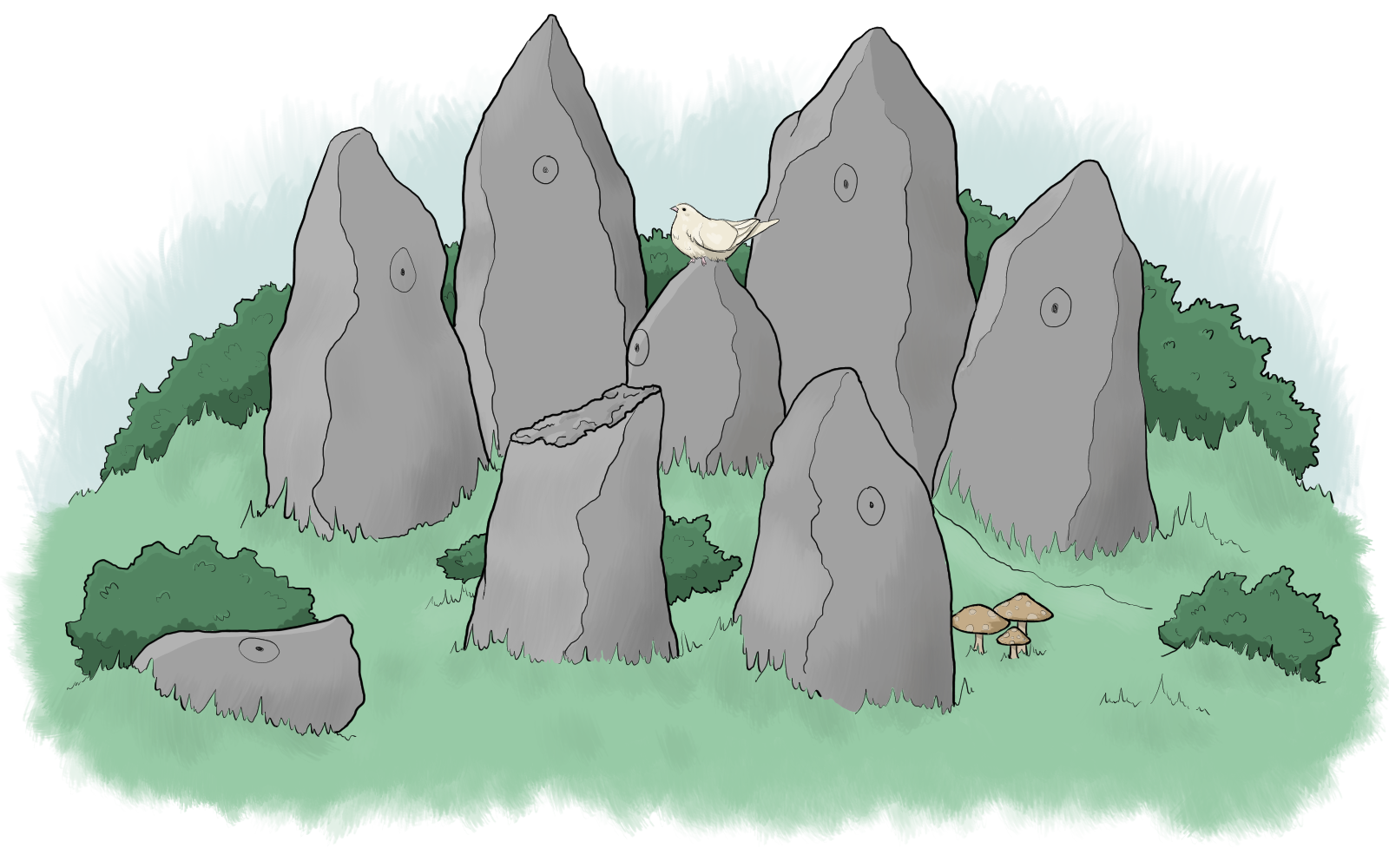 Runestones of Alahon by Ninne124
The islands mostly have a tempered climate with mild weather, little wind and temperatures which allow for roaming without warm clothes. However, the air island as well as the dark island are considerably colder, which can be observed as the Air Fae rarely stay on their island. However, the Earth Fae do use their islands, but mostly stay inside their large heated structures.

Most of the islands have the same plantlife as the one they had when they were still in the human realms. The Spirit Fae has made sure that all plants live on, except for a few trees on the dark island which were left to die for aesthetic purposes.
All of the islands have a few critters, bugs as well as birds. Many of the species can be found on multiple islands. Though they're able to roam freely, most keep to their natural habitat.   One species, however, have caused a major problem. The Nordic Stinker is a type of bug found in the north of Dysvoll, which has a pungent and overpowering odour, sure to disgust anyone in close proximity.


They don't want to admit it, but someone brought this stupid stink bug into Alahon and now it's gotten out of control!   It's on every island now - we're talking invasive species here!
— Olka, earth fae

The first recorded case of the bug on the isles was in 1518. Every attempt to eradicate the bugs have failed so far. Now the fae believe the small bugs are magic resistant, which has created an obstacle they have yet to overcome.

The realm of Alahon was said to have existed for many years, some suspect that the Old Fae created the tiny pocket dimension to test their capabilities and that they just left it behind when they were done with it.

A long time passed and everyone had forgotten about the tiny pocket dimension, but then a few fae found their way into this realm, but they found nothing but vast darkness. Most would've left again and forgotten all about it, but Yleen Ikliass did the exact opposite. She had the bright idea to convert this empty dimension into a resort away from the rest of the world, especially the humans who were the bane of her existence.

This realm had been forgotten, not a single memory of it persisted, not until I found it once more.   I will name it Alahon, which means remember in the old language. It won't ever be forgotten again.
— Yleen Ikliass

She started working on Alahon, but it was proving difficult to turn the empty nothingness into a viable home for the fae.   It didn't help that she had limited time to work on it as she had to teleport back to the Human Realms to charge up the spells that allowed her to breathe and prevented her from freezing to death.
At last, she reached the conclusion that she was not adept enough at Earth Magic to firstly form new land into existence and then alter it to her desires. So instead, she set out to find what she wanted in the other realm.   This decision led her to pick out locations she particularly liked in the human world. Then she'd simply gather enough fae to have it ported to the pocket dimension where they would be left floating in the darkness. Afterwards, they used magic to create a fake atmosphere and stabilise the climate on the tiny islands and a couple of light fae were brought in to apply a powerful light illusion, so it looked like the islands had a sun.

From one day to another, multiple areas of Dysvoll reported land missing. Literal pieces of land seemed to have been ripped up from the earth, leaving giant craters behind.   This led to the widespread myth about Jetnain, a giant sea creature who had launched himself out of the ocean and eaten parts of the land because the humans had stolen his food by overfishing the oceans.   To this day, the craters can be seen throughout the human realms, especially in Dysvoll but a few of the islands were taken from other continents as well.

A cluster of runestones found in Alahon, they have several powerful spells tied to them and are what makes the spells last.

The one Fae who rules them all. Only High Fae can be promoted to the status of Arch High Fae.

A throne said to have been built by the Old Fae when they last inhabited the world.   This location was taken from Dysvoll, where the throne had been hidden inside dense forestry for many years. 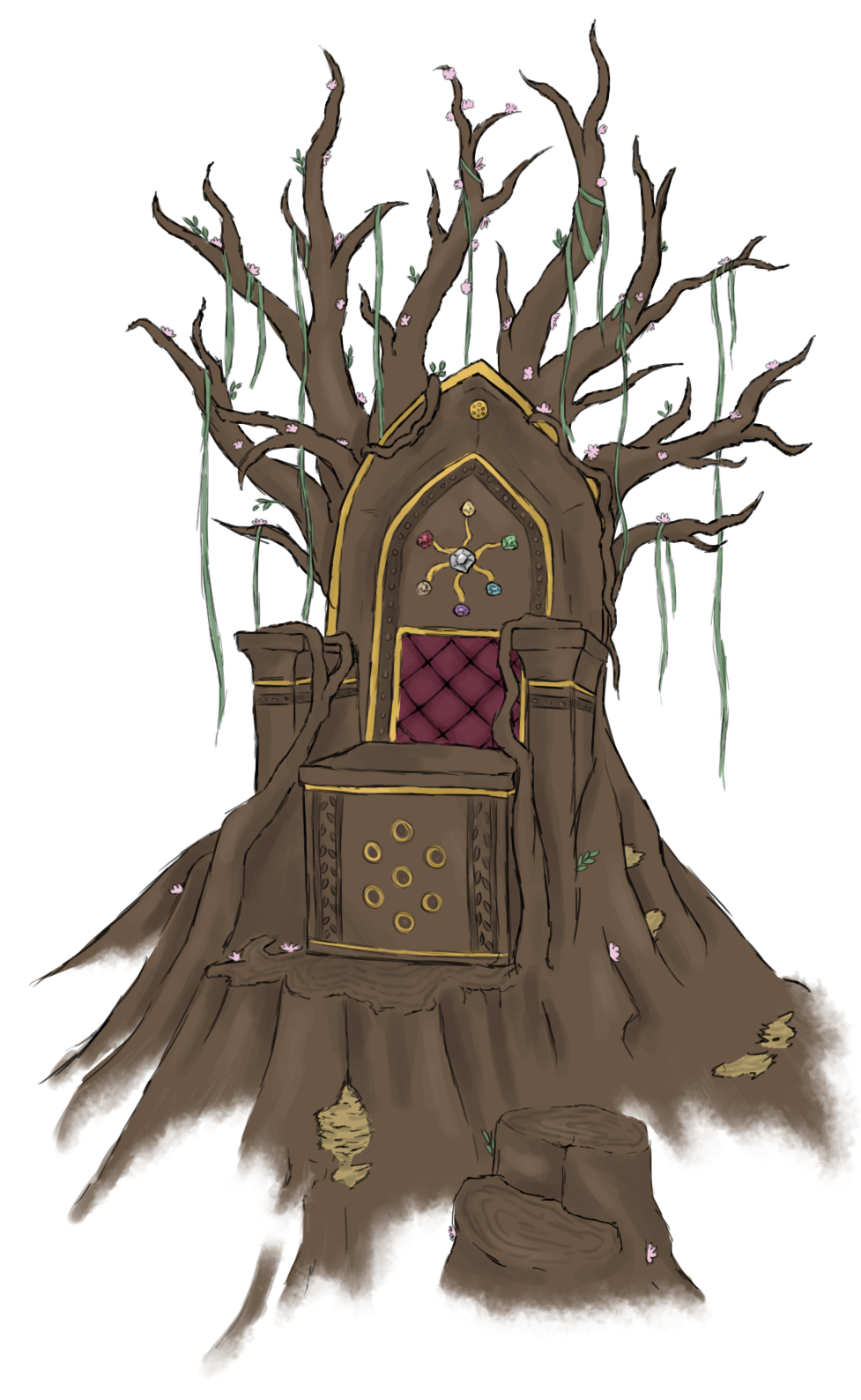 Throne of a Thousand Trees by Ninne124

The throne room of the Arch High Fae

When Yleen Ikliass started her work to repurpose the pocket dimension, the fae were still fractured and kept to themselves and their own kind.   When the fae united after the Treaty of Kloevendal, they repurposed a number of islands so that each type of fae had their own corner in Alahon.
However, it took over 20 years before the Spirit Fae were ready to take part in the unity on the same level as the other Fae, and they were, therefore, the last kind of Fae to get an island in 1502.   Though they now have an island, they're still not ingrained in the community as much as the rest of the fae, which is completely their own choice.
Important Events


Drawn in it's entirety by ninne124

Though the land area of the pocket dimension is small, there are still various interesting spots to be found throughout Alahon. One could say there's even a high concentration of places one could call either a landmark or a point of interest. The causation of this is, that the fae who chose the landmasses, mostly chose spots that were already interesting. This led to a variety of different natural geographical elements as well as old fae monuments and even human buildings.

Some of the most important locations in Alahon are the portals. These spots are the only way to arrive and depart from the pocket dimension and they are treasured highly.   Most of the portals placed outside have a big stone circle built around them. The stone elements are not essential to the portal, rather their purpose is to help people spot the portals.   Less important or less frequently used portals are often placed inside some of the small structures on the islands.

This tree is a completely ordinary tree which was brought to the realm due to a demand from one of the people Yleen sought help from. Though it's just a tree, it has its own tiny floating island. This happened because the highly esteemed fae known as Legnas the Illusionist demanded to bring that exact tree with him, for no apparent reason. If his demand hadn't been met, he wouldn't have helped with the project in any way.   Many find this story to be amusing, and the tree has been kept around even after Legnas went missing in 1446.   Besides the funny story behind it, the tree is also known for being the first tree that ever survived being transported into Alahon. Yleen had accidentally caused all other plants to wilt when she had transported the landmasses in.

This volcano had been brought to Alahon when the region was first built, but it was meant as a decorative piece rather than a residential area. However, after the treaty, the Fire Fae chose this location as their own and they have kept the volcano going ever since.   As many people know, volcanoes are only active due to magma and tectonic activity. None of this is present here, at least not after the area was ripped out of the earth and therefore the volcano only looks to be active. In reality, the smoke and lava sometimes sighted are but illusions kept up by the fire fae. 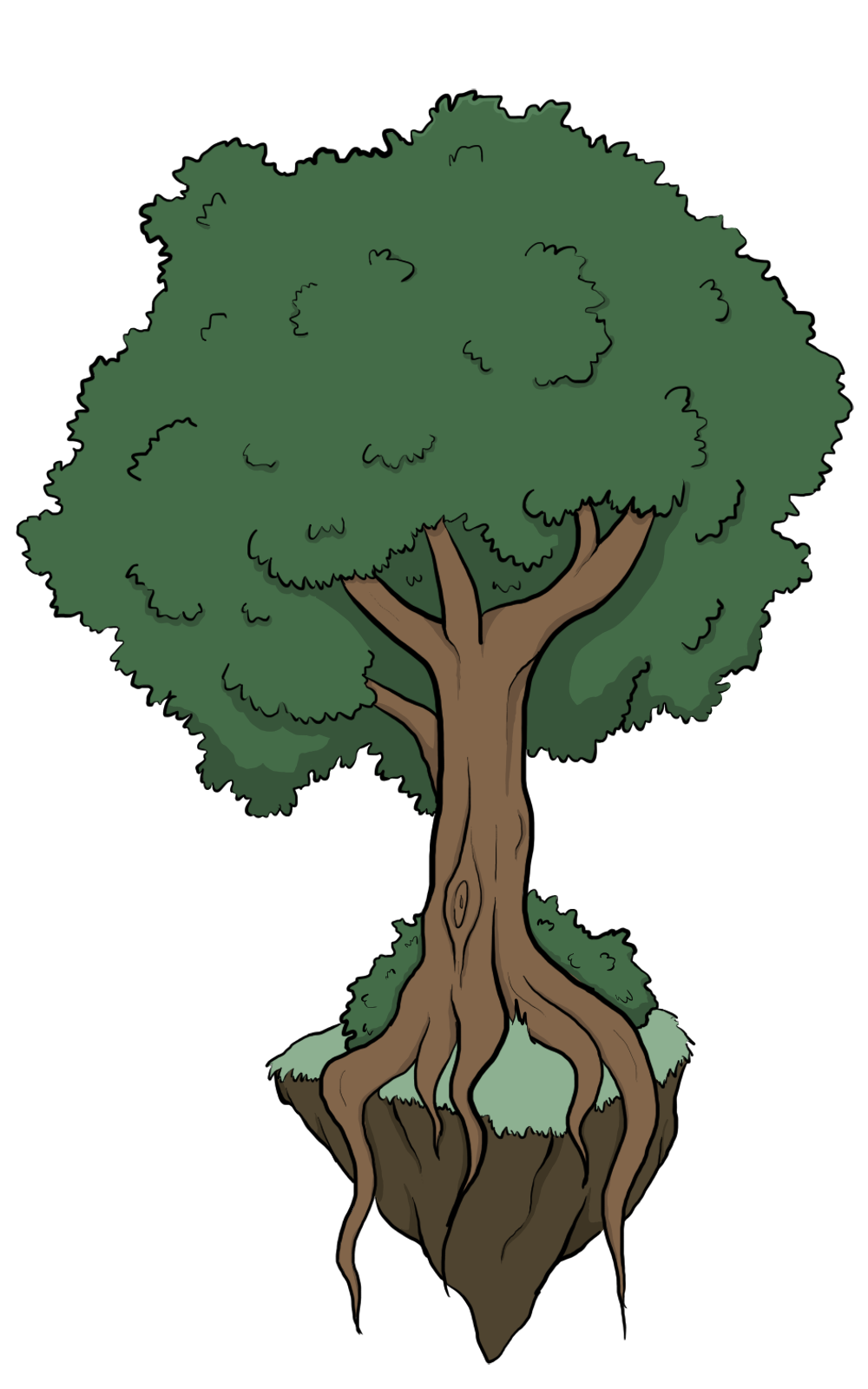 Tree of Legnas by Ninne124

Part of the Ellecran Forest which was taken to the pocket dimension known as Alahon.

A completely ordinary tree. It is owned by Legnas the Illusionist.

The throne room of the Arch High Fae

I love the the concept of this place... and the art style and the article formatting. And the little bird on the runestones in particular.

Thank you for the kind words! :3   Mr. Borb (the bird) is admittedly my favourite part of any drawing on this article XD

What an amazing map! I love it! This entire article is beautifully illustrated, formatted, and written. I like the bit on the Tree of Legnas, that's a great origin for the tree hahaha.

Thank you so much Stormbril! :3   I like the tree as well, I don't know why but I really felt a need to add something silly in there XD

Aaah I love everything about this article! It's so gorgeous, all your images and the map are amazing and the text is super interesting! Great work with all of this!

Huh.   This is one of the most beautiful maps pages I've seen.   Your Alahon map is amazing. The 3D view is spectacular, and I'm a HUGE fan of black and white drawing, so you had me there as well...but I truly love the layout of the page. Adore the gold trim and specifically the golden symbols under "A Warped Reality".   Fantastic. You have my vote for the win.

Thank you, Jaime! It was very nice to log in and see this comment waiting for me.

The art you've created for this article is just astounding and that map is one of the best on WA. It's a well-written, interesting place and also BIRB!   Very well done Ninne :D 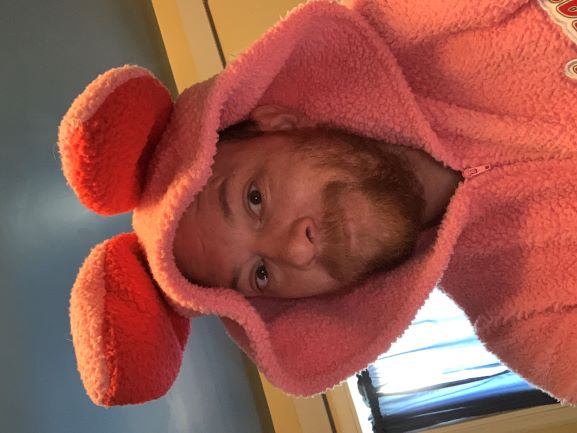 What a wonderful article, congratulations on the weekly feature. Keep up the good work.