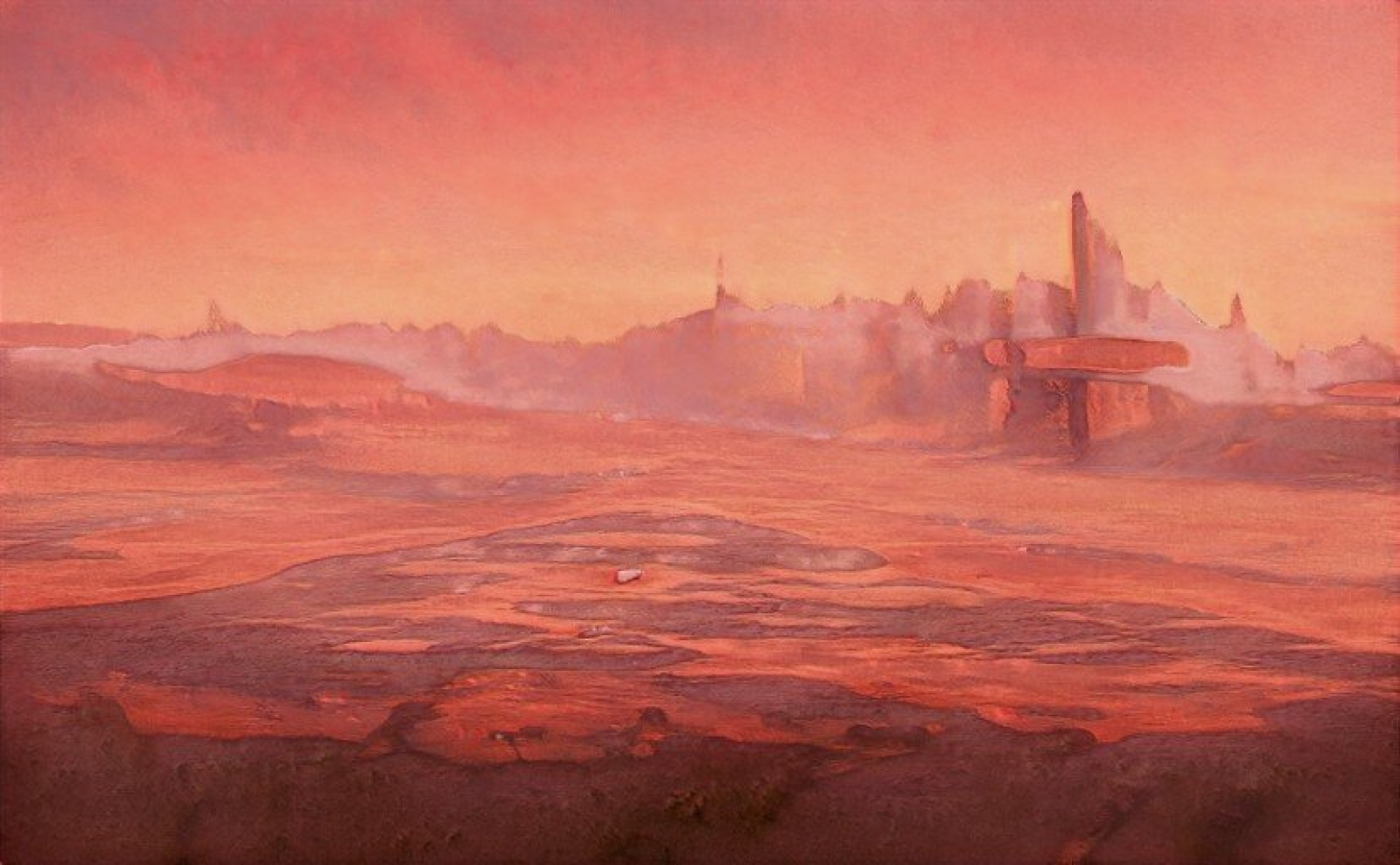 Manifold Sky    Locations    The Tesseracts      Rostral Tesseract      Red Velvet Desert
The desert of the Rostral A is known as the Red Velvet Desert, a name evocative of the fine, vibrantly-hued red sand that the hot wind blows across the landscape there.

While rocky crags dominate the edges and vertices of the cube layer, the lowlands of Rostral A are mostly occupied with vast 'oceans' of sand dunes. These dunes are comprised of extremely fine dust which has been colored a vibrant orange-red by naturally-occuring iron deposits. The constant action of wind across these dunes further polishes the dust, lending the desert its famous 'velvety' appearance. 'Islands' of stable rock separate portions of the desert from one another and constitute the only stable terrain on which the sparse Rostran population of the cube layer can build. Surface moisture is and precipitation in general is extremely limited in Rostral A, with only a few mountain springs and oases providing potable water.   Because of this unique terrain, locals often 'sand-sail' between their small, sparse settlements atop 'sandboats.' These barges are motorboat-sized hulls broadly similar in construction to airboats (as one might use in a swamp) or catamarans. A sandboat has a large mast and sail to capture the winds which usually sing through the desert, propelling the sandboat across the silty dunes; when the winds die, an arm tipped with a diesel-driven sandscoop tire is lowered off the back of the sandboat to provide propulsion. autogyro and camel travel are also common in the Red Velvet Desert, the former being preferred over fixed-wing aircraft due to a reduced need for space-intensive runways and the latter because these animals are well-adapted to drought conditions.

While the Red Velvet Desert is an important part of a major Rostral/Medial trade route, the desert itself has relatively few exploitable resources. The iron-silicate sand is sometimes used for glass production, but this is relatively minimal and is mostly done for local uses. The lack of water for the production of biodiesel would leave the locals at the mercy of foreign traders if not for the invention of sandboats and the presence of camels.   In fact, the most abundant resource in the Red Velvet Desert is 'sunlight'. The blazing hot, cloudless days allow the small surface communities to harvest solar-thermal energy to power their settlements, perform certain industrial processes, and purify their limited water reserves. Various initiatives to transmit power from Rostral A to other locations in the Rostral Tesseract have been proposed throughout the years, though doing so would require the destruction (or cooperation) of the Avarix Corps to accomplish.

The majority of travel through the Red Velvet Desert occurs as the result of commerce. While the route to the Medial Tesseract directly through the Rostral D inflection layer to Medial B is the most direct one, the ongoing War of Reunification in The Human Arc makes traversing this region of the Manifold Sky to trade dangerous at the best of time. Furthermore, crossing into Medial B to only trade with one side in the War will inevitably provoke sanction from the other. Taversal through the Western Tesseract to Voxelian territory is similarly infeasable, as the natural terrain of the Western Tesseract (i.e. mostly underwater) makes traversing it via commissures extremely difficult.

RAC Travel Standard by BCGR_Wurth
As a result of these special considerations, the Rostran Archipelago Confederacy, Ovinex Island Tribes, and Hermitage Island Fellowship conduct most of their trade with humans via the Rostral A/Eastern B/Eastern A/Medial C route, promoting strong trade ties with the powers in Medial C (the Free Faces League, Commonwealth of C, and Craterhold).

Unfortunately, because of this activity, the Red Velvet Desert has become a particularly active region for another faction as well: the Avarix Corps sky pirates. The Avarix maintains bases of operations concealed within natural caverns and beneath sandstone shelves where the desert floor and vertex mountains meet. Using the rocky terrain as cover against aerial bombardment, the Avarix are commerce raiders which represent a significant threat to non-native trade interests. The risk of piracy has, in turn, greatly increased the fortunes of various mercenary crews (i.e. the Hive City Royals) who are employed to guard clients' business ventures involving the region. 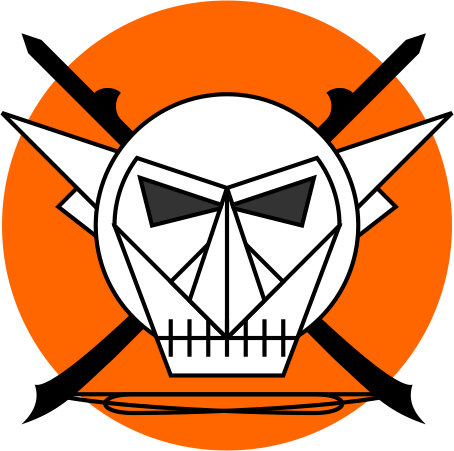 Avarix Corps Deathshead Symbol by BCGR_Wurth
While the sparse local populations of Rostrans, Ovinex, and Freelanders often have moral qualms with the activities of the Avarix Corps, the Avarix's loot eventually suplements the local trade economy with normally rare resources (i.e. biodiesel), leading most to look the other way or, in some cases, even venerate the pirates.   Despite the natural and criminal dangers of the region, the Red Velvet Desert still sees a degree of foreign tourism not connected to trade routes. The desert's famously velvety sands are a popular venue for sand-sailing, motorcycling, and photograpy, while the local glasswork culture provides interesting souveniers. Members of the Burning Hearts Social Club spend long periods of time among the locals, soaking in the unusual "dry islander" hybrid culture or even engaging in headhunting activities against the Avarix.
Type
Desert
Location under
Rostral Tesseract
Included Locations
Included Organizations
Owning Organization
Avarix Corps
Contested By

Sand-snailing sounds like so much fun! I love how much you link to other articles in your world. It just makes it seem so real.

Thanks! I have been trying to emphasize interconnection, but I do worry about going overboard with the links :)

It definitely doesn't read like you're going overboard with it. It reads like this is a really deep, well-thought-out world with a lot of realism.