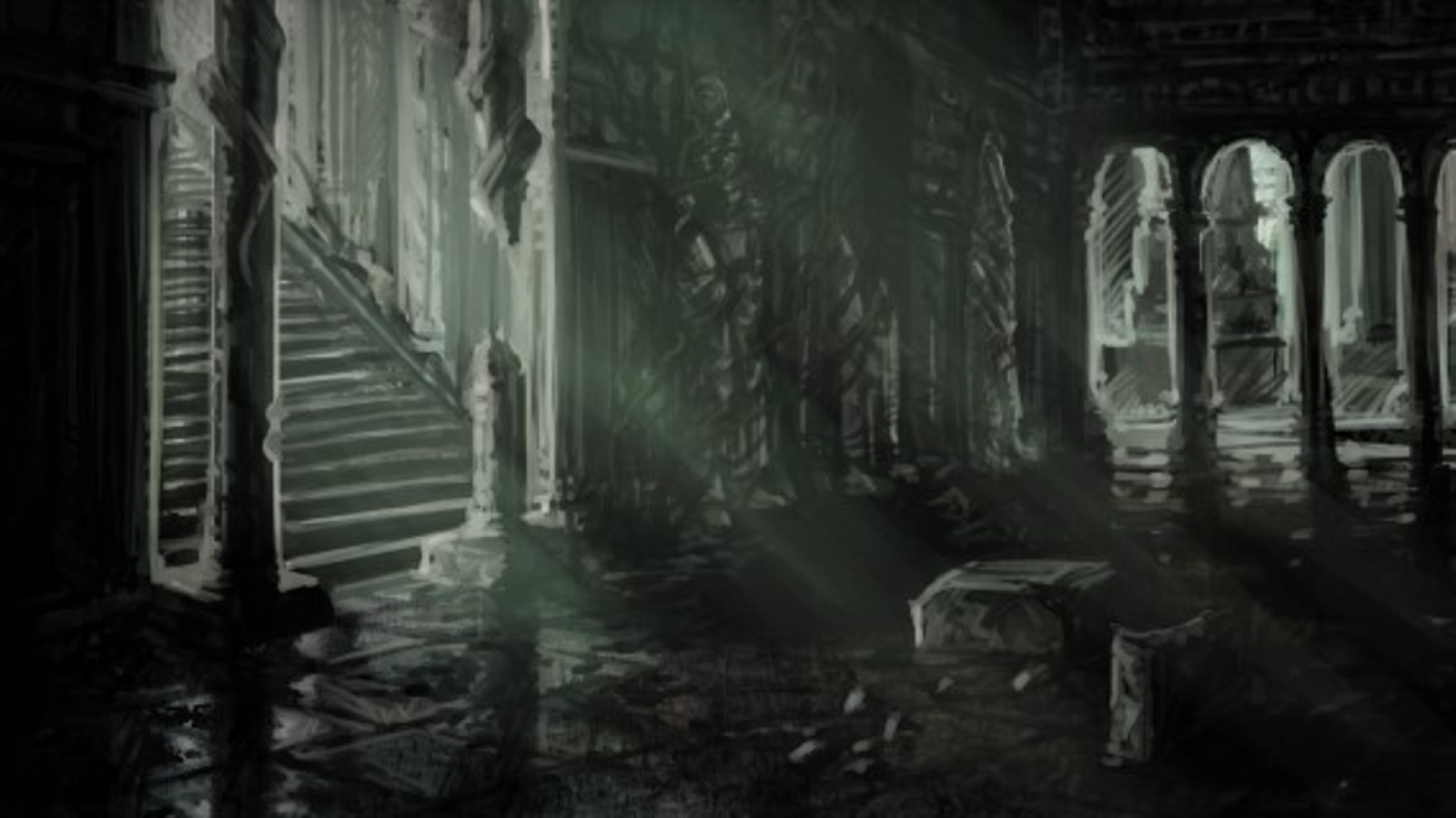 I regarded it at a distance, the mansion still mostly there but now only home to the creepers growing down its walls and the ghosts that reportedly coast down its halls.
— Hajar Stoutsong, famous Dwarf adventurer

The Sanmire Estate was built when the House of Sanmire rose to prominence roughly three hundred years prior to The Cataclysm Wars. It was the family's residence for the entire period until its abandoment following Lord Sanmire's vampiric conversion and subsequent annihilation at the hands of Aregos Falstar.

There was only one alteration made in the entire history of the estate. It occurred some point after Lord Sanmire was turned into a vampire when he a secret crypt was built into the foundations to hide his coffin.

The Sanmire house was one large, sprawling, grey stone building. Built long before the Cataclysm Wars, it was a mix of unnecessary extravagance and defend-able functionality. It was symmetrical in design, with a central porch and welcoming area and two large towers on the front corners that lead up to upper two floors. The building extended backwards from those towers so that when viewed from above, it would resemble a 'U' in shape. At the top of each tower there was a statue of a crow, which was the symbol on the Sanmire house crest, protruding from it.

The House of Sanmire had a long and rich history in the times before The Cataclysm War. The historical documents that survived the War and the subsequent power struggles speak at length about the deeds of this once great House. Though, these documents were prioritised for protection as a measure to ensure their legacy was not entirely stained by the last Lord Sanmire.   However, for the majority of the population, it will only be remembered for the Assault on Sanmire Estate, a gruelling battle to eradicate the vile Vampire that resided there. Many lost their lives removing this danger from the world early in the Cataclysm Wars and it is especially notable as the day the promising Dawn's Guard soldier Lothaire was turned into a vessel of the undead by Sanmire before Aregos eliminated him. The affliction would not be found until weeks later, upon which Lothaire fled and was welcomed into the Council of Nine - the organisation that were responsible for the War in the first place. As for the Estate, with Lord Sanmire vanquished and his crypt torched, the place was left, abandoned.   The Assault on Sanmire Estate is not the only battle recorded in the archives that took place there. Due to its location north of Dawnstone, it was often in the way of any Orcish invasions, and a handful of minor skirmishes were fought on Sanmire soil.

Shortly after the end of the war, once the world had calmed down, every now and then a few people would get interested in seeing if the estate had anything left to offer a curious adventurer. That's when reports of disappearances started trickling in. Of the few souls that survived to tell their accounts, they would speak of spectral figures and monsters in the dark halls. The Dawn's Guard would send a party to investigate every now then, when the cases started to pile up, but they all came back saying the estate was empty apart from the vermin and other critters that had taken advantage of the abandoned structure. The only wounds inflicted were by regular corporeal threats that happened to coincide at the location, such as being attacked by a startled pack of wolves. Nevertheless, the stories of the ghosts of Sanmire Estate persist to this day.

The Sanmire family were considered in the upper echelons of society for much of their history. Despite this, very few have left a lasting legacy beyond their Estate's walls. In the three hundred years prior to The Cataclysm Wars, members of the family held the position of General of the Dawn's Guard twice, Chief Lawkeeper thrice and spawned one notable artist. Kyran Sanmire's paintings are still regarded positively enough to hang in Dawnstone Palace and one of his works sits on the walls of Dwarf King's residence too.
RUINED STRUCTURE
9BCE

That was super interesting! I liked your description of the architecture, it gave me a pretty good mental image of what might be there now. As a quick side note, I think you might have a typo in the alterations section? Were you trying to say that there is only one alteration ever made to the estate? But yeah, I really enjoyed it, and now want to go read about the Cataclysm Wars! I would love to learn about about the Cataclysm Wars!

A lot of the articles submitted to the Summer Challenge have a connection to the Cataclysm Wars, so there's a few already out there... and more to come! Thank you :) [and yes, I think I reworked that sentence a few times and ended up with something incoherent haha]

I love the description of the estate, it's very detailed and gives a great mental image. I also enjoy reading the history behind the place, feels like it really has a place in the Cataclysm Wars.

Thank you, appreciate it :)

Delightfully creepy! I like the details given a lot