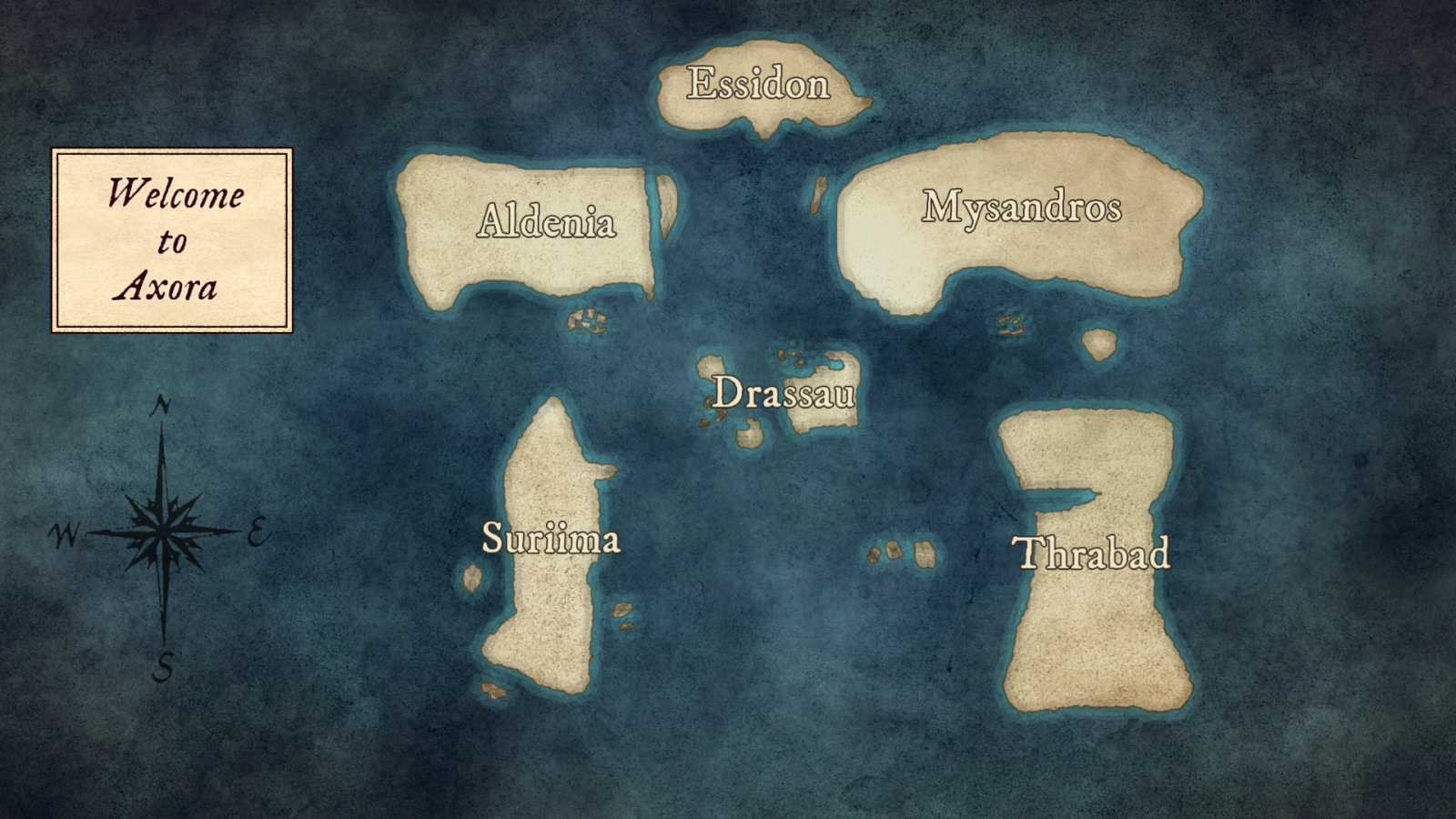 Aldenia is the temperate continent in the northwest. It's supposedly the cradle of civilisation, where the first people were created and then spread across the world during the Age of Discovery.   It was also the seat for the devastating The Cataclysm War. Whilst the world felt the effects, the core of the war happened in Aldenia and it is a continent that still bears the scars of that conflict.   Still, the evil Council of Nine were defeated nearly six hundred years now and Aldenia has returned to prosperity. Though, with such a long period of peace, paranoia for something to upset it grows...

The largest continent. Maressea in the west is arid and dry, known for its especially deity-centric culture and the finest of wines. The Kingdom of Gonde lies in the northeast, though it is a cold and largely frigid tundra. Hantau in the south-east, however, is hot and rainy and the primary source of the most expensive metal in the world - platinum. The island nation of Nyamene, the home of the catlike Feldeni, sits off the southern coast. Mysandros is a continent of varied climates and varied people alike.

Drassau is not one landmass. Drassau is a collection of islands situated almost directly at the centre of the four continents situated around it, Aldenia to its north-west, Mysandros to its north-east with Suriima and Thrabad to the south-west and south-east respectively.   Drassau's political structure is notoriously fluid with ownership of the various islands changing hands on a relatively (by historical standards) quick turnaround. With much of its lands being coastal, the people of Drassau are the most natural of seafarers.

The mostly tropical continent sits far south of Aldenia. Hot, humid jungles spread across its lands. Its major landmass is shared by two nations, the Couvalon Kingdom in the north and the Quitapha Dynasty in the south. The border between being the mysterious and sinister Phantasma Jungle, making passage across a dangerous trek. Much like in Aldenia, Couvalon is controlled by a monarchy and is a mix of cultures for all that have settled there. However, in the south, the secretive Jungle Elves are ruled over by their Empress.

Thrabad is mostly dry and arid. The sand dunes of the north are controlled by the Khena Empire. The nation of Djakoro is sandwiched between the lands belonging to Khena and the fractured country of Mazvinga in the south. Mazvinga is embroiled in a centuries-old civil war. If it wasn't protected by a vast mountain range, Mazvinga may have had to worry about Djakoro having ideas of taking it over. Though, Djakoro faces a constant threat of the land-hungry Khenans from their ever-receding northern border.

The frozen wasteland resides at the northern tip of the world. An almost symmetrical landmass split down the middle by permanently snow-capped mountains into two nations.
Tweet

Tweets by @@TheAmazingChi
Watch live on Twitch
All Headers via Unsplash, unless stated otherwise.
Translations provided for D&D purposes where required, D&D copyright of Wizards of the Coast