Manifold Sky    Independent Factions    125 Hands      125 Hands
The 125 Hands are cynical, misanthropic cabal of converts to the Forgist faith who seek to undermine social hierarchies throughout the Manifold. Originally refugees from the destruction of Tartagloam, members of the organization are motivated by a fierce desire for vengeance against all other humanoids (especially Voxelians) and the Manifold in general for their perceived cruelty. 125 Hands fanatics provide a support network for the infamous Garbage Man in his quest to expose the world of the Manifold Sky for what it is - a torturous, artificial shadow of the real world, where all are punished for the forgotten sins they committed during the long-forgotten "curved time."

Three to five individual members, known as Phalanges, are organized into local cells known as Digits, which are in turn organized into regional groups of up to five Digits known as Hands. This organizational structure is reflected in the signet of the 125 Hands, which displays five hands whose fingers branch into yet smaller fingers at the tips. The Medial F Hand serves as an administrative cadre, with The Garbage Man at its head, though individual Hands are free to pursue the goals of the organization as dictated by local conditions.   While the name of the organization would imply that there are 125 Hands, the actual number Hands fluctuates due to losses or recruitment. Any hand which loses at least 30% of its membership is disavowed by the organization and may only reform by moving to a different region of the Manifold. This decentralized cellular structure serves to prevent infiltrators (such as the famed Voxelian Bards-Recursant) from ascertaining the full extent of the organization's activities.

As cynics and misanthropes, in the short term, the 125 Hands seek to overturn all existing social hierarchies and destroy or pervert the 'great' works of civilization. The Garbage Man sits at the head of his own Hand and, in his self-appointed role as the anti-Creator, sets the overarching public agenda for the organization through encrypted messaging to other Hands. Dissemination of broad organizational objectives is further aided by a campaign of subtle, subversive propaganda efforts throughout the Manifold. The political ideology of the Hands might be described as a strain of anarcho-primitivism, where the cruelties of the human animal are only magnified by the advanced social structures and technologies that allow for ever more violent bloody international conflicts - specifically, the War of Reunification that saw Tartagloam destroyed.   In the long term, the Hands seek a way to escape from the Manifold into the surrounding Celestial Realms where they can be free to live in isolation from all other human beings, though eventual revenge on the peoples of the Manifold remains a goal in this case. Alternatively, the 125 Hands hope that The Garbage Man will help them destroy the Manifold entirely, granting everyone peace through annihilation. Alternatively

The 125 Hands operate a network of safe-houses in suburban communities throughout the Manifold, preferring to blend in with communities while searching for targets for subversion, sabotage, or assassination.

Over the last three decades, the 125 Hands have been involved with numerous otherwise unexplained acts of espionage, sabotage, theft, and murder throughout the Manifold, always acting in secret and always targeting politically important individuals or pieces of critical infrastructure. When not actively committing crimes, the Hands distribute subversive propaganda and work behind the scenes to foment civil unrest. The Hands conduct these activities with the intent of undermining the geopolitical power or technological advancement of nations. Although the Commonwealth of C was the original home of the Hands, the Hands show their native country no favoritism; this is both because the Commonwealth is a party to the much-hated War of Reunification and because targeting the Commonwealth serves to mislead investigators with regard to establishing motive for the Hands' numerous secret crimes.   In the early days, the Hands' activities were limited by their small numbers and lack of any single leader with the vision required to direct their efforts. While he was active in the Tartagloam ruins as of 9970, The Garbage Man did not join the Hands until the year 9972. As he became more invested in their Forgist ideology, he suffered a years-long decline in mental health, developing the case of Folded Hands Syndrome in 9981. His prophetic delusions would subsequently lead him to uncover his very real supernatural powers in 9995. He then used this newfound power to quickly ascend within the ranks of the Hands, becoming their spiritual leader in 9996.   Having gained de facto control over the organization, The Garbage Man used his powers and the Hands' intimate knowledge of foreign nations' weaknesses to launch a Manifold-wide assault in the year 10000, using the diversion created by Hands attacks to steal the Menger Catalyst. While the intentions The Garbage Man and his Hands have with the Menger Catalyst remain unknown, the fact that the Catalyst is potentially the most powerful explosive ever devised by Manifold scientists has led to widespread panic in the media over how such a group of omnicidal villains might put the Catalyst to use.   For a selection of important historical events relating to the 125 Hands, see the History of the 125 Hands Timeline.

Because Tartagloam was once a holding of the Commonwealth of C, the original membership of the 125 Hands is a microcosm of that population group. Most members of the Hands are of Elovisian or New Voxelian ethnicity, though the small Vale Verdial population of the city was the original source of the organization's Forgist philosophy.   Prospective recruits are drawn from local populations - with individuals inducted based solely on solidarity with the cause of the 125 Hands over any other considerations - so that local Digits and Hands are indistinguishable from the communities which they infiltrate. Most new recruits are Humans and Verdials of assorted ethnic backgrounds. Rostran and Ovinex recruits are uncommon, as the former are generally pleased with their places in the cosmos and the latter - beyond their lack of intellectual complexity - are generally unwilling to work against the collective interests of their herds.   125 Hands members are generally united by an extremist interpretation of the Forgist faith and a disaffection with the cruelties of life in the Manifold. By joining the organization, these individuals are able to gain a sense of community that they otherwise would not experience in their personal lives. Defections and retirements from the 125 Hands are rare; as the list of criminal deeds each Phalanx has committed lengthens, any potential desire to leave the organization in search of other communities is stifled by the fear of being apprehended by authorities and executed - or worse.

The 125 Hands have no allies on the geopolitical stage, though they may feign friendliness or neutrality to further an ulterior objective - usually souring diplomatic relations between allies or performing false flag operations to sow discord. After the Hands uncovered evidence of graft within the Navigator's Guild in 9979, even that ostensibly non-partisan organization made a special exception to oppose the Hands.

While the 125 Hands share the cosmological views of other Forgists - that the Manifold is an artificial construct made by a Creator - they combine this outlook with the Unexpector view that sentient beings were placed in the Manifold as a form of punishment for prehistoric sins. For the Hands, the violent destruction of Tartagloam has proven that humanity's penance has not been completed to any meaningful degree, and that the Creator has cruelly chosen not to release humanity from its suffering through death or isolation from one another. In this sense, the Hands find themselves opposed both to all other human beings and to whatever god created them.   The Hands regard The Garbage Man - the only known entity with purportedly supernatural powers in the Manifold - as a sort of anti-savior. The Garbage Man is a force opposed to the Creator, and is willing to grant the Hands respite from their suffering through the unmasking and subsequent destruction of the Creator's grand artifice.

While they lack the finesse of professional infiltrators, the 125 Hands are nevertheless fully capable of temporarily infiltrating institutions to suit their malicious goals. Once imbedded, Phalanges set about performing covert criminal acts until they are either caught or become too concerned with being caught to continue. As the original members of the Hands were citizens of the Commonwealth, where dieseltech computer technology is ubiquitous, the Hands are particularly adept at systems intrusion as a means of sowing chaos.   Phalanges are not known for their deep cover endurance, preferring to remain in an institution only so long as necessary to complete their objectives. Hands missions are most successful in the Commonwealth of C, Craterhold, and the Free Faces League, where those of the Elovisian ethnicity are less likely to draw unwanted attention. Phalanges have more difficulty maintaining their cover in the Manifold Conservation Society and Voxelia due to strong counter-intelligence in these nations. 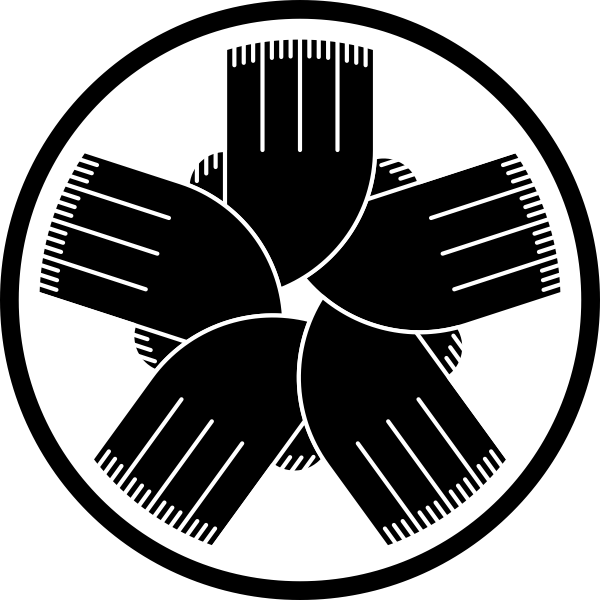 Hands Unfolding upon the Keys

Fingers Grasping upon the Truth

Fists Breaking upon the Pillars

The 125 Hands and Forgist Extremism

When taken to extremes, Forgism is a philosophy which has the ability to spread nihilism in the manner of a memetic hazard. Because every culture in the Manifold shares a distant memory of the "curved time" - when people lived on round planets instead of within the 5-plex of the Manifold - the idea that the Manifold is essentially a cosmic hoax is quite persuasive. Indeed, The Garbage Man, leader of the 125 Hands, suffers from Folded Hands Syndrome (FHS). FHS is a culture-bound syndrome specific to the Forgist faith which happens when someone becomes so wrapped up in their beliefs that they completely loses perspective on what's real and, therefore, what matters or what is appropriate to do in a social setting. The 125 Hands are very much like other religious extremist groups in this regard: they feel empowered to do terrible things by the belief that the eternal divine will matters more than the temporary material world.
* * *

A detailed timeline and I noticed the fractal geometry incorporated into your group's symbol.   They sound like a terrorist/anarchist group with a fatalistic worldview. I'm curious on how they might logistically maintain their network if its members do not intrinsically believe in their material world? I think it would be helped if you include witness testimonials or member interviews to personalize their viewpoint.

Thanks for the comment!   I agree that there are concepts that should be expanded upon in regards to motives/logistics. Normally, a bunch of fatalists wouldn't really have the requisite degree of public goodwill to spark a movement like this, so I'm trying to figure out how to contextualize the movement in the rest of the world without dumping the whole Forgism article into it. Maybe a good sidebar blurb would look like this:   "When taken to extremes, Forgism is a philosophy which has the ability to spread nihilism in the manner of a memetic hazard. Because every culture in the Manifold shares a distant memory of the "curved time" - when people lived on round planets instead of within the 5-plex of the Manifold - the idea that the Manifold is essentially a cosmic hoax is quite persuasive. Indeed, The Garbage Man, leader of the 125 Hands, suffers from Folded Hands Syndrome (FHS). FHS is a culture-bound syndrome specific to the Forgist faith which happens when someone becomes so wrapped up in their beliefs that they completely loses perspective on what's real and, therefore, what matters or what is appropriate to do in society The 125 Hands are very much like real-world religious extremist groups in this regard: they feel empowered to do terrible things by the belief that the eternal divine world matters more than the temporary material world."

I'm blown away by your theme and formatting...but I love your timeline.   Well done. Have my vote.