Manifold Sky    Technology    Dieseltech    Computers      Dieseltech Computer
Dieseltech computers - also known as "data engines," after a prominent company which manufactures them - are physical computers containing fluidic and mechanical components which make heavy use of biodiesel fuel to power themselves and perform calculations.
Dieseltech computers rely on "programming gaskets" - sheets of flexible, chemical-resistant materials perforated with pores or inset with tiny toggle valves - to store instructions. Fine jets of biodiesel are squirted through these pores and combusted to both translate these instructions into physical impulses which the rest of the equipment can interpret and to power the system via the pressure generated by the expansion of exhaust gasses. In this way, dieseltech computers are a species of heat engine. Processing may occur in either fluidic or mechanical subsystems, with each type possessing pros and cons which are often the subject of heated debate among dieseltech computer engineers. 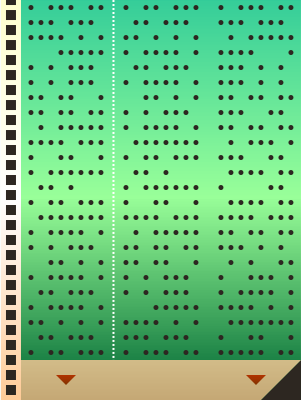 By allowing more nuanced automation than previous mechanical computer systems, dieseltech computers have obvious applications in manufacturing and data analysis. Because a dieseltech computer is capable of utilizing biodiesel directly, dieseltech computers are especially useful in applications where diesel engines are already in use; not only is an intermediary form of energy conversion (i.e. linkages which might lose energy to friction) not necessary between engine and computer, but the computer can often be directly involved with the functions of that engine (i.e. optimized jetting, autopilot, thrust vectoring, and precise application of torque). Because the programming gaskets of a dieseltech engine can be more finely punched than those of purely mechanical systems, a dieseltech computer can sometimes be more compact than a comparable mechanical system. Finally, because a dieseltech computer contains few - or no - fine electrical components, a dieseltech computer is generally more hardy against impacts, electromagnetic interference, and radiation as found in the Northern and Southern Tesseracts.   While rather efficient, dieseltech engines cannot be used in environments where exhaust gasses cannot be expelled, and the fuel used must be oxygenated if a system is to be used in low-pressure atmospheres (i.e. skystations located in inflection layers). Purely fluidic dieseltech computers are more durable, require less maintenance, and can perform analog computations. Purely mechanical dieseltech computers can operate in any orientation and are easier to maintain when required. Core computing presents a growing challenge to the dominance of dieseltech computing, though this remains a very immature technology as of the year 10,000 AR. Semiconductor-based computing may eventually render dieseltech computers obsolete due to superior miniaturization and scalability potential, but the semiconductor technologies do not currently exist in the Manifold and the required materials are very rare, meaning that this technological advancement still lies far in the forseeable future.
Parent Technologies
Children Technologies
Access & Availability
Dieseltech computers are widely available throughout the populated regions of the Manifold Sky, though factions differ in terms of the sophistication of their data engines and what they use them for. Specialized, pre-programmed dieseltech computers are more common than generalized models due to fact that specialized models can be mass-produced and more tightly integrated into the surrounding machinery in which they will serve pre-determined roles. State agencies, militaries, large businesses, and other large factions represent the majority of the dieseltech computer market.
Complexity
Dieseltech computers combine existing mechanical, fluid, and (emerging) electromechanical computer technologies and combine them with internal combustion engine technology. As a result, the chemical and material considerations involved are more complex, but at the same time, the utilization of very minute amounts of biodiesel allow dieseltech computers to be self-powered and more energy efficient on a per-calculation basis than previously existing systems. Dieseltech computers which utilize expensive "valved gaskets" in lieu of pre-punched gaskets can be Turing complete, having the ability to alter their own programming in response to inputs.
Related Items
Related Vehicles

It really is impressive what can be accomplished in terms of computation through only mechanical means. Check out this video I found on youtube about old mechanical ballistic computers to see what I mean!
Please Login in order to comment!

ooooof this is such an excellent way of handling this topic and make it fits with the world so well. Love the inspiration it came from as well. I actually didnt know about this. Well done as always.

This is such an interesting application of the technology, I love it. :D