Pointed ears and grand statures have come, over the years, to be the indicator of that noble and yet oft terrifying species of the magic-drenched elves...
— The Codex of Species

Elves are tall, lithe humanoids that settled upon the surface of Istralar following their evacuation via elf-gate of their former home and formed an immediate bond with the natural world that is often compared to the closeness of druidic tradition. Despite differences in regional tradition and disparities between ethnicities, this intrinsic respect and love for the natural world runs in the blood of almost every elf, and drives the elven tendency to reject others.   This isolation isn't helped by their lengthy lifespans. Elves live for centuries longer than a human could ever hope to, and as such, the brief decades a human could offer them pale in comparison to the time they could spend forging deep bonds with their kin, or indeed, with their particular corner of the world. An elven druid who has remained in their own domain for centuries may know every falling leaf by the feel of it; a halfling could never achieve the same without magical aid.   Arcane magic became a specialty of the elves when it first arrived upon Istralar; it led to their presence on Terra Arcana in higher numbers than almost any other species, and to their overwhelming association with magic. Galasthin is known as a pioneering centre of magical research and tradition across the borders of what is arcane or divine, and elves make up great numbers in every organisation related to magic - whether that be the Keepers of Divinity or the Kartovian Exploration Society.

Elves have tall, slender physiques that lean towards dexterity rather than strength. They remain similar in structure to humans, but their increased height and effortless grace comes at the cost of a weaker skeletal structure.

To be blessed with motherhood is wondrous for any elf. Elves capable of bearing children undergo a fluctuating yearly menstrual cycle quite unlike a human's; the duration of their period can last anywhere from a week to three months. Their most fertile times are similarly in flux - a few months after a period, they enter a period of fertility that can last anywhere from three days to a month, signified largely by a slightly heightened temperature and occasional odd pains. Conception is achieved by sexual intercourse during this fertile period, but even during this time, the chance of conception is fairly low. Many elven couples are forced to wait multiple years to bear children unless magical aid is sought.   It generally takes eleven months for an elven child to gestate (though some may take longer) when the parent is pregnant. During this time, the childbearing parent must be defended as their natural reflexes will suffer. Birth is a difficult process, traditionally made easier through the aid of other elves and fey. Twins are nearly entirely unheard of, and usually result in severe damage during childbirth - sometimes resulting in the parent's death. Mostly due to their frail constitution, elves choose to only bear two or three children, as the risks dramatically increase after the third child. Parents with more than three children receive mixed responses; admiration for their bravery, but worry that their actions will encourage copycats.   Elven society is constantly in decline; numbers only maintain by the use of magical aids throughout the various elven countries.

Elven children grow extremely fast in their early years, being able to speak and walk in their first year. Whilst physical maturity is not completed until their late 70s, and they are not considered fully mature until they reach the age of 110, their minds develop far more swiftly (though true maturity is only gained with experience). Young elves might appear to be human-style toddlers, but will possess mature language and skill beyond their apparent years.   Elven ears begin as slight points, and only become the long, pointed ears of tradition after physical maturity. This is often a point of teasing for younger elves. Occasionally, the ears will not develop properly and will require magical intervention.   Elves hit middle-age at around 175 years old, are considered 'old' at 263 years, and venerable at 350 years. The eldest of all elves can live to around 750 years, but old age can claim them any time after they hit 350.

Whilst elves are originally from another planet, they now find themselves most at home in forests, wildernesses and other areas of secluded nature. Most elves are in touch with their environment, and take pains to protect and defend it from any aggressors. Cave elves are extremely rare, and are often stigmatised in elven society due to their proximity to drow.

Elves bear a natural sense of magic that lingers in their blood. This magic is responsible for their classic ability to resist enchantments and sleep, and for the larger population of elven spellcasters. Depending on the heritage of any such elf, this magical ability may express itself in the form of elemental resistance, aptitude for particular forms of magic, or even the power to tap into dreams.   In addition, the stealthy nature of elves and their larger eyes and ears have allowed them to develop brilliant senses. In areas of dim light, they can see further than most men, and their sharp eyes can spot detail that others might miss. 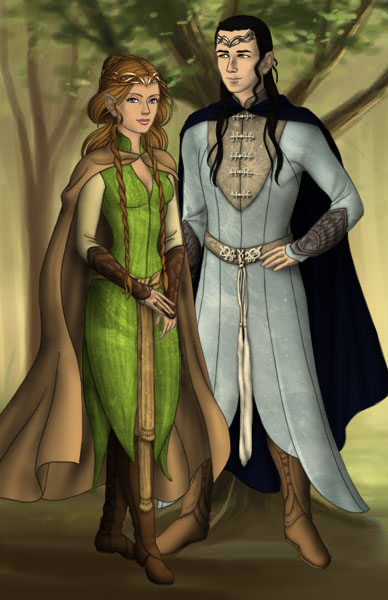 Elven names sound melodic at all times; a byproduct of their language's musicality, even with regional variation. 'Harsher' letters, such as 'z' and 'k', are avoided. Most elven cultures speak of separate first names for different relations; parents, lovers, friends and strangers will each use a different name for the same person, and these names are often considered precious. Some cultures keep such names close to the chest, or have separate names for speaking in public or private; to non-elves, this can be highly confusing.   The regional variation can be significant: Azsire Tulyátar and Hrizse Diaelan, both snow elves, have very different rhythm to their names when compared to Talindë Ae'tharis or Lyadrí An'thimael of Galasthin; however, the snow elves Taenion Naralthar and Iuvaeni Amliris have names that fall closer to standard elven names. Hirena Ussendil and her sister Mihira are exemplary of Rhaead's own unique style of elven names.   Note that in each of these examples, the sounds remain identifiably elven, and the last names in particular call back to roots in Galasthin with strong similarities to those used by Galasthin's citizens today. This is indeed the case for most elves in the world, as Galasthin was their origin - Ilendras, for instance, maintains strong naming tradition that closely aligns with the style used by Galasthin's citizens with little variation. Despite this, last names do differ by family status and somewhat by local culture. Generally, most couples either combine their names into a new last name, or choose one partner to take the other's name. If the surnames are significant, however (such as when dealing with royalty), or if the couple wishes, both names may be kept and used by both. In romantic groupings larger than two, last name discussions can endure for hours - particularly if multiple major players are involved, such as a noble house or merchant family.   Examples of male names: Isarion, Arendir, Terelas, Endarel
Examples of female names: Lissadriel, Myriandrae, Ysania, Niriannve

Surnames of the Kingdom

The Kingdom of the Galasthin Elves has adopted a different surname tradition altogether. Each family line chooses a prefix of 1 to 5 letters. This is placed before an apostrophe. The rest of the surname (i.e. after the apostrophe) can be any length, and is used to determine the exact branch of a family. Firstborn children retain their full original surname, but subsequent children are given different last names upon reaching adulthood. In the case of firstborn children falling, the secondborn is given the chance to take on the main line's name.   In marriage, the more prestigious (and generally shorter) prefix is taken by both partners, but they retain their original last names otherwise. As an example of this naming schema, the family lines of Aer'laeth and Aer'issanel are linked, but someone with the name Eru'laeth would not be related (unless it was someone of Aer'laeth who married someone with the prefix 'Eru').

Once-verdant trees glinting blue in the fading light, their former leaves razor-sharp, a swansong of a falling civilisation. The Ancient Ones gifted us their dreams and bid us take heed of the gods' divine guidance across the Astral Sea, where the essence of our kin was forever changed by the chaotic magics of the Maelstrom...   We arrived to a whisper of what we once had, to forests and wilderness already tainted by lesser mortals. Time may pass, but we shall not forget what was once seen; nor shall we allow history to repeat itself atop a new star.

The elves of Istralar are an alien species that arrived many thousands of years ago in the Era of the Divine. In the earliest days of civilisation, as dwarvenkind settled the mountains of Iskaldhal, the elves stepped out of a newly-formed elf gate into the northern forests of Xin-Jiyu bearing seeds, crafts and fauna from their previous home. Thankful to their gods for guiding them to this new star, they near-immediately began to construct their first home - Melaeden - in the centre of the forest. From here, elven life would advance across the world, spreading druidic teachings to every corner of the planet. This first day is treated by most elves as the 'New Dawn', and is generally assumed to mark the beginning of their self-appointed guardianship of all Istralar's nature.   The lengthy lifespan and natural proclivity for magic all elves possess oft grants them skill that they see as being unmatched by other species, though this is rarely true in practice. Over the years, this unfortunate tendency to feel superior has manifested in the systematic oppression or outright genocide of peoples they have seen as lesser, and as high political tensions and war when said 'lessers' refuse to be considered as such. This most recently manifested in the Purge of Galasthin's drow-infested depths; what began as Archmage Lyadrí An'thimael's goal to destroy evil and protect the remaining drow was spun out of control as a genocidal surge of anti-drow sentiment and the complete extermination of all drow that remained there.   These same tensions are what have long given elves their tensions with the dwarves. When first the elves arrived, they sought to conquer all they saw; whilst many human, orc, and halfling civilisations either could not resist or saw benefit in the arrangement, the dwarves of Gildómar were vehemently opposed to the idea, and the groups battled bitterly. These tensions have not faded over the thousands of years since, their cultures forming in ways that oppose each other on an intrinsic level - though these days, there exists a rough peace between the various elf-dominant and dwarf-dominant nations, and it is not unknown for friendships to form between the barrier of species.

Distant relations of Galasthin's elves who try to eke out an existence in one of the most inhospitable environments across Istralar.