Oh, not that asshole.
— Syrin Elathien

One might think that the levels of distrust around arcane magic would remind scholars to be restrained in the rate at which they progress their studies. One might think it unwise to make it obvious how much they know; how much power they can wield. One might also think that a person with significant arcane power and knowledge would be controlled and understanding of those with legitimate concern over said power's use.   One might think that, yes. Azsire has never particularly cared for what others might think he should do.   Azsire Tulyátar is, according to himself, a snow elf of the Querei tribe - and certainly dresses according to his culture's style, if the white robes and fantastical jewels are anything to go by. Despite appearing to be relatively young, Azsire has attained an awe-inspiring amount of mastery over arcane magic and thus has gained access to the accompanying knowledge his tribe keeps locked away in the Tower of Sathelis: this would perhaps be more worrying if he seemed to have any ambition to use the knowledge for more than just his own educational purposes.   Recent revelations have uncovered that part of Azsire's mysticism is attached to his status as an avatar - perhaps the only example of a mortal soul merging with a pre-existing avatar. As avatar of Jäätta, it is all but certain that the elf has some connection to the Elsrei, though he has remained remarkably unclear on the specifics of his past. It is perhaps this connection to Istralar, as one of her avatars, that encouraged him to be the one to imprison the Harp of Virtue - thus being the sole individual standing in the way of a Shard of the Void's influence over the planet. It is unknown what impact this has had, if any, on the lands he protects. 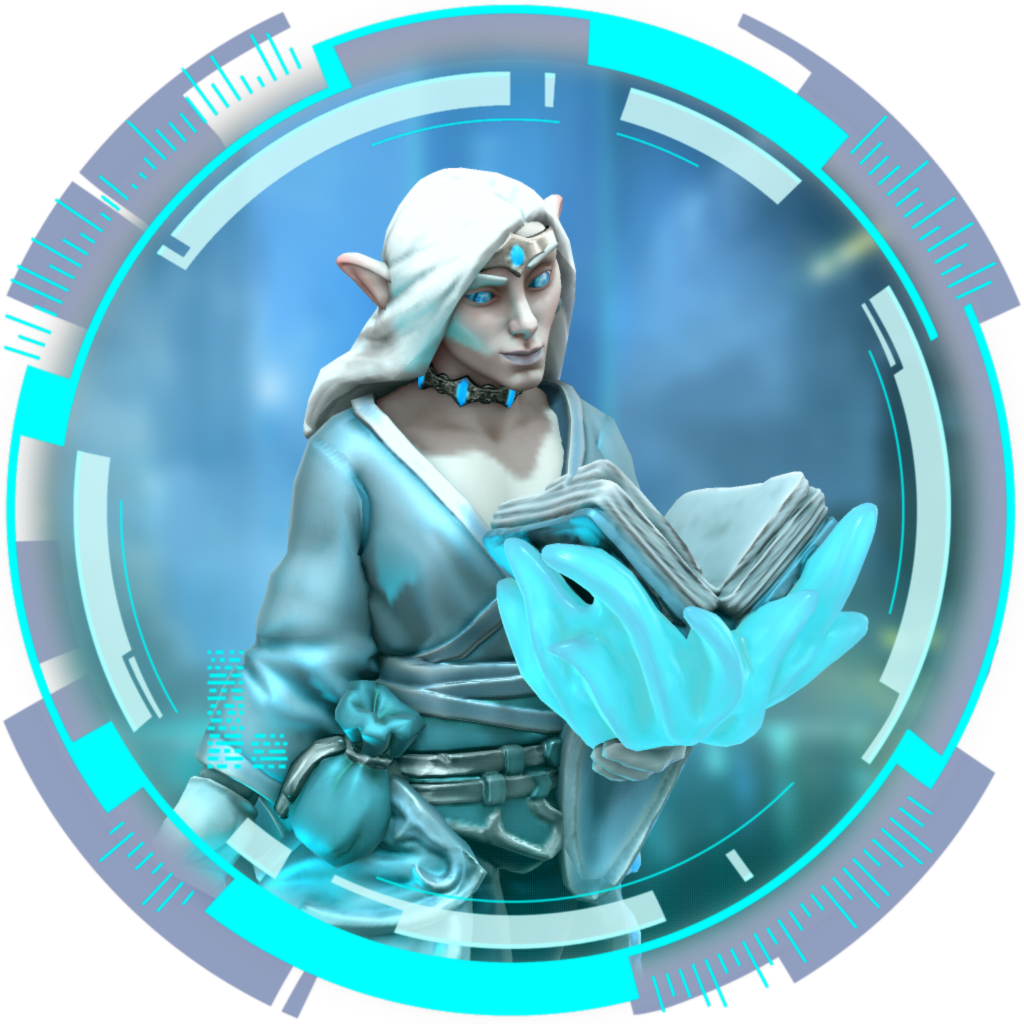 Lithe and dextrous but with only very average strength, Azsire fits the typical image of an elven mage. No scars are noticeable on any of the skin he leaves exposed, but his body temperature is notably colder; even the air he passes through becomes chilled.   His long silver-white hair falls to approximately his mid-back, largely left loose aside from the odd tightly-woven braid and is kept out of his face by a gem-encrusted silver circlet that rests against his forehead. His eyes are a piercing, inhuman blue, the pupils often white instead of black. A rough scar marks his neck, new and unfaded.

Living up to the stereotype of snow elven features more than fantastically, Azsire's hair and skin both reject most colour in favour of sitting as close to white as possible. His skin is tinted lightly with a flush of pink, giving him almost porcelain features, whilst his hair holds more of a blue hue. His ears are long and pointed - a sign of older elven bloodlines, rarely (if ever) intermixed with humanity - and he tends to adorn them with silvery ear cuffs.   If other features of his would stand out as abnormal, they're not publicly visible.

You're so enamoured with the idea of looking like some 'perfect' doll. You considered acting like one as well? Silent? Lifeless?
— Syrin Elathien

Arched eyebrows rest over lidded eyes that often glitter with ice-toned eyeshadows. Azsire's features are not quite as angular as an average elven man's; his are softer, made rounder still through his make-up artistry. A smirk tends to linger on his lips, replaced with a condescending smile of dismissal for those who don't quite meet his standards.

For all his bragging and condescension, Azsire is actually a surprisingly powerful spellcaster. Like many snow elven spellcasters, the ability to tap into icy power runs in his blood, and he takes full advantage of that in conjunction with his spell-tome. The limits of his powers aren't well-known, likely intentionally, but he has mentioned a number of dangerous abilities - including the creation of a full personal demiplane.

Enjoys wearing robes, gowns, and other flowing pieces of fashion that accentuate his natural features and match his so-called 'colour palette'. Whilst he does show a rather decent amount of skin in these outfits, he's also cautious to never break local indecent exposure rules and to keep a set of matching elbow-length gloves on. Some sets even have false nails, much to Phaiyah Asthakhan's disapproval.   He is never seen without at least three pieces of jewellery on, one of which tends to be his intricate circlet, nor can he be found without his spellbook somewhere at his side (or, as it may well be, floating in his area). Said spellbook takes the form of a silver-bound grimoire frozen shut with deep blue icicles; Azsire seems to have no trouble opening it, though others struggle.

Now, darling, you can't expect me to give everything away so easily. If you are so intrigued by me, I would be more than happy to reveal more of myself to you - perhaps in the bedroom, mm? All you need to do is ask, dears.
— Azsire

Usually sticks to male pronouns, but feels gender isn't something to be overly concerned about.

Openly fluid with sexuality; pansexual in every sense.

Dangerously sharp with the charisma to back it up. Enjoys it when someone can actually match up to him, often swiftly turning things into a verbal spar - sometimes in multiple languages. Shows far less patience for those who demonstrate a clear inability to think critically or use any logical sense - often finding a means to exit the conversation or magically end it if they don't prove to be entertaining in any other manner.

Bringing up the Elsrei or Jäätta may have interesting results.

Greatly enjoys flirting and seductive behaviour, especially when with a partner intelligent enough to match him. Presumably has just as much fun in the bedroom, too. He genuinely seems to like discussing magical theory, history of the world, and anything in connection to extraplanar creatures amongst many other topics of interest - despite his sluttish behaviour, he is a scholar.   Also likes the snow. A lot. Finds it hilarious to throw a snowball at unsuspecting allies when they've previously stated a dislike for snow.   As for his dislikes - anyone without the ability to use their brain is a disappointment to Azsire, and unless they find some other way of being useful, a waste of his time. He finds sharp noises to be exquisitely painful (and tends to express his dislike through spears of ice), and tends to disdain warm environments. Affronts to the eyeballs are, similarly, disgusting.

My dear, I know I'm positively divine, but I truly don't need the hassle of worshippers-- excluding in the bedroom, of course.
— Azsire

Often described as an asshole. Doesn't object to the description, instead amending it to "educated asshole" if asked.

Syrin first met Azsire in-person in the snow elf's native Querei lands, at the the Tower of Sathelis. They immediately had a somewhat antagonistic relationship that has only just begun to mellow out as Syrin finds his injuries worsening - his reliance on Azsire's powers has worn down his biting remarks towards the elf into an odd mixture of uneasy gratitude and sardonic wit.   Their mutual actions of protection - Azsire keeping Syrin well-shielded from the Spiritblade, and Syrin's immediate actions to protect Azsire from Phaiyah - have somewhat secured their friendship, rocky as it is, and the time spent with Talindë Ae'tharis and Burdyr Donderiall has granted the four a quiet fondness for one another that, much as neither Syrin or Azsire would admit, they would not want to lose.

Hrizse and Azsire met as children in 5249, becoming fast friends after Iuvaeni deemed Azsire worthy of introducing to her closest confidante (and they happened to be in the same place for once). Their friendship did not blossom into love until many years later, when Iuvaeni and Hrizse invited Azsire into their trio; whilst it was Iuvaeni who took the step of initiating the conversation, it was Hrizse who was first to convince Azsire of their sincerity.   Their relationship was effectively forced to an end in 5385, a full century after the fall of Jäätta. Both of Azsire's partners remain in Jäätta to this day as remnants of what they once were.

Iuvaeni and Azsire met as children in 5241 - first as rivals, then as incredibly close friends. Iuvaeni lead their relationship into love when she and Hrizse were already together much later on, far closer to adulthood, having realised their friend had come to mean more to them both.     Their relationship was effectively forced to an end in 5385, a full century after the fall of Jäätta. Both of Azsire's partners remain in Jäätta to this day as remnants of what they once were.