"Ada Khreaper was killed by the Great Blackout. All that remains is the Virus."

Virus is a known criminal who rose to the public eye after the Black Dawn's disbandment, previously assumed to be Jinx. The original owner of the identity Jinx stole to commit high-profile crimes, she has embraced her place as a criminal and is hunting the Black Dawn for vengeance.

Virus' body was enhanced with PROJECT ECHO, an incredibly advanced cybernetic invented by Virelios Castellan. Both of her arms were amputated at 6 inches above the elbow and both legs at 7 inches above the knee, all replaced by advanced metal prosthetics. The cervical region of the spine and areas on the sides of her skull are also home to cybernetic implants connected to the cerebellum and deeper into the brain.

Thanks to PROJECT ECHO, Virus possesses the ability to perfectly recreate any effect, physical or magical, that she visually perceives. Additionally, thanks to Castellan's own posthumous instruction, she possesses the secret form of hacking magic, similar to that of Jinx.

Ada Khreaper was put up for adoption the moment she was born. She has no memory of any family, living in an orphanage for her entire childhood without ever making friends. After moving on from the orphanage, she decided to pursue a career in technomagic, first getting an entry level job at Ace Arcane Softwares as an Assistant System Operator. She kept moving up in the company until she achieved the position of Software Keeper, until that position was taken by someone named Thalia Miaro, a past alias of Jinx, then was demoted to her assistant. Thalia was the closest person in Ada's entire life at that point, so she decided to try and befriend her.   Thalia and Ada seemed to really connect as coworkers, but Thalia treated the relationship as nothing more. One shift, Thalia didn't come into work. When she tried to clock in, she found that all records of her employment were mysteriously erased. None of the employees remembered her, and neither did the system. Regardless, when she claimed to be Assistant Software Keeper she discovered that the Software Keeper position was wholly taken by Thalia Miaro, who was working from home with no such assistant. With nowhere left to go, Ada left the building and returned home, unable to provide for herself.   Ada had incredible difficulty finding a job. The only job she could find was an apprenticeship at a vehicle repair shop in Valland City, but her previously modest lifestyle had to be drastically cheapened. One night, Ada was walking down the sidewalk on her way home from work, stopping to wait at the monorail station. Suddenly, photos of nine wanted criminals began to plaster every billboard, advertisement, and screen in the city. News broadcasts were interrupted, radios hijacked, and automated police reports containing photos of escaped convicts were sent to every phone in the city. Avaahn Casper. Balasar Blackwater. Isabella Cromoni. Malia Deceit. Milo Vale. Tarik Gamathanki. Thyreos Xaltakarr. Virelios Castellan. The Black Mountain's first ever group of escapees were on the run from the police, but most strangely of the criminals identified was Jinx, with Ada's own face used for a mugshot.   Ada was shocked, not knowing what to do. That was her on every screen in the city, her mugshot. But she had never committed a crime, not even anything minor like jaywalking. She covered her face in defense, but others had already started to notice her for the first time in her life. Her monorail arrived, but not before whispers were passed, fingers were pointed, and calls were made. She frantically got off on the wrong stop in hopes of escaping wrongful punishment, but the looks followed. She made it 2 blocks before the Valland City Police Department apprehended her and brought her to Black Mountain Maximum Security Prison without any questions.   This kind of treatment persisted for weeks after she was let out of prison. She had been to the Black Mountain a total of 6 times, not to mention numerous beatings at the hands of the Cromoni Mafia, mental probes by the Cult, and even a visit from Protector Leandro Richlash. Ada was receiving all of the punishment and consequences for a wanted criminal's actions. Again and again she was subject to punishment by the law or other aggrieved criminal organizations. Even when she reported the criminals, she would instead be wrongly arrested. She gets out of prison, and criminals find her and attempt to collect a bounty. This all changed the night of Silvamber 12th, 575: Valland's Great Blackout.    Ada was peacefully yet nervously wandering the city, until the entire country's power shut off and hellions began to storm the streets. To find refuge, she hid out in the nearest building: Castellan Enterprises Headquarters. Oddly, she found an open door to some kind of basement in her search for shelter, and the heavy metal door locked behind her. She thought she was finally safe from the city. Within the basement, she uncovered scraps of data and records regarding CDA-1, CDA-2, Virelios Castellan, and all of his hacking magic he pioneered. If Castellan was able to invade a technomagic system, altering it to his will, she may have just stumbled upon the explanation for the incipient point her life was ruined; she may have discovered how her name was removed from Ace Arcane's employment records. All of a sudden, the basement's backup power kicked on, at which point Ada was greeted by a strange and sinister voice, the voice of Virelios Castellan.   Castellan explained that he had been murdered by the very same criminal who had ruined Ada's life, and had created an advanced AI capable of holding all of his memories and thoughts. At the time of his death, this AI was turned on, hopefully carrying over his consciousness into a new vessel. Castellan approached Ada with a choice; a choice to get revenge for the way her entire life was so terribly ruined. The CEO and Ada had a common interest, so Castellan was able to trick her into entering the surgical table to be implanted with PROJECT ECHO, an advanced cybernetic initially designed for Jinx. Ada's forearms and legs were cut off to be replaced with advanced prosthetics, and the upper spine and skull were hijacked by implants that made her extremely powerful. At that point, Ada was imbued with the most powerful cybernetics at the time, able to perfectly mimic any ability or effect, physical or magical, that she sees. With a newfound power, she set out into the criminal underworld to enact vengeance on Jinx, with the ghost of Virelios Castellan helping her along the way. 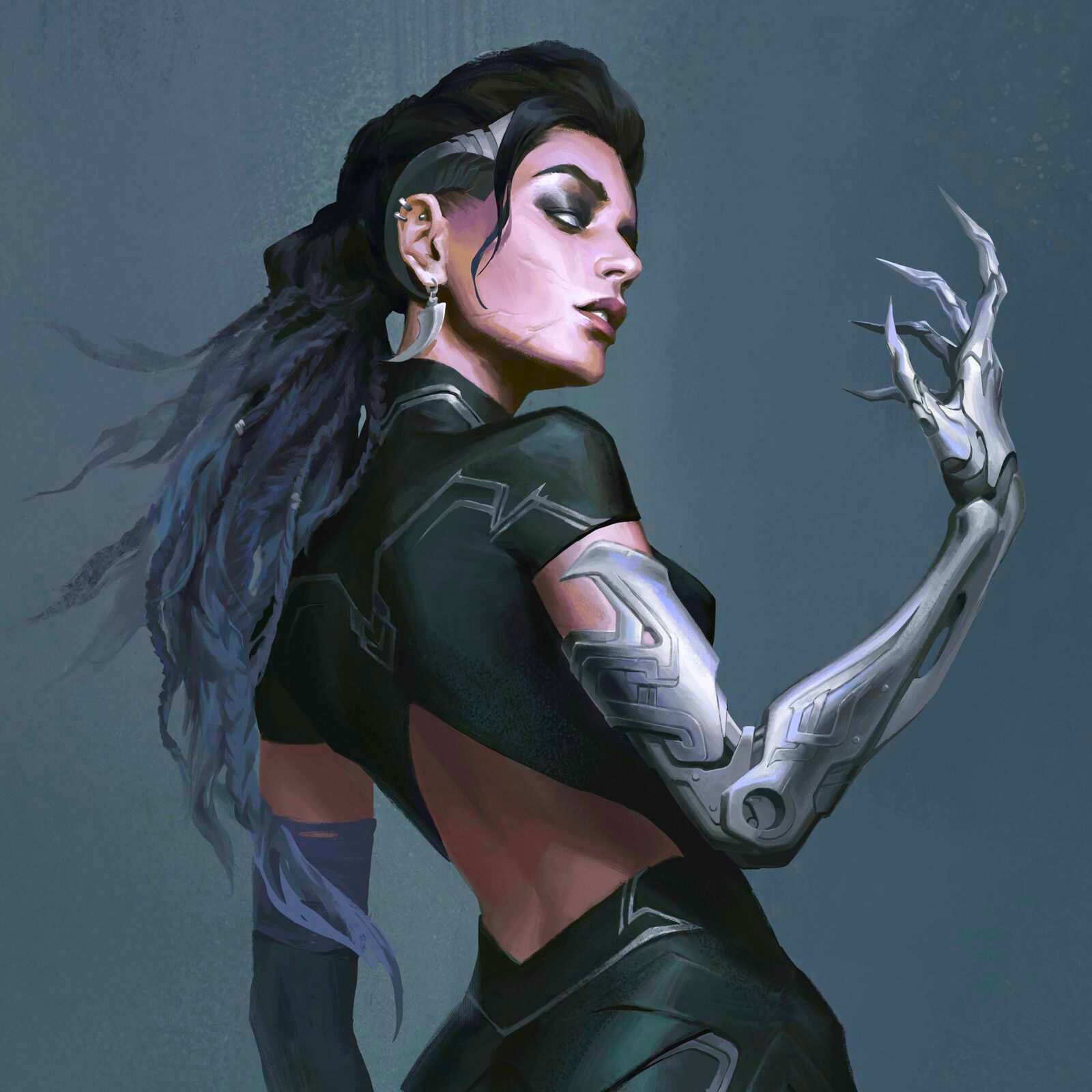 Robbed of her own identity by infamous hacker Jinx, this unidentified woman became the innocent target to Jinx's own criminal justice. Her life and identity destroyed, she wants nothing but revenge.