The Terran Empire was a major polity formed in 2387 on Earth. It replaced the inter-rim government which was a successor state to the Federated States

The Empire was founded on the 1st of September 2387 when August Solarin was crowned by General Desper Hammond of the ruling Junta as Emperor. The Empire replaced most of the existing structures of government with its own and took power. There was some resistance to this but the Empire became the primary government of mankind by 2389

House Solarin became the ruling Imperial House, based on Earth which was also named as their fiefdom. August Solarin was confirmed as Governor of Earth. After the 2406 summit, the title of Emperor would be elected on the death of abdication of the Emperor meaning that House Solarin wouldn't be certain of remaining imperial house. In 2429, Princess Regina Valane-Solarin ascended to the throne and was a member of both House Valane and House Solarin but primarily identifies as the scion of House Valane   see Great Houses of the Empire

Emperor Solarin set up an Imperial Court on Earth in the capital city of Dhaka. The court would be the primary seat of government for the Empire but the planetary governors, once approved by the Empire, would have general autonomy to rule as they see fit and would also be allowed to appoint their own successors, with approval from the Emperor.

Each planet's governor, initially appointed by Emperor Solarin in conjunction with his allies in the coup, would serve a life term unless they chose to abdicate and would have an unrestricted right to appoint their own successors, essentially creating a hereditary aristocracy When the Governor of the Stark colony "sold" the colony to Fulbright Nolan, new rules were put into place that if someone outside of the current rulers family was named as successor, this would be subject to review by the Council of Governors   The exception to this is Fort Pitcairn which is ruled by an elected Governor, as per its own agreement as a colonized world and its own internal constitution 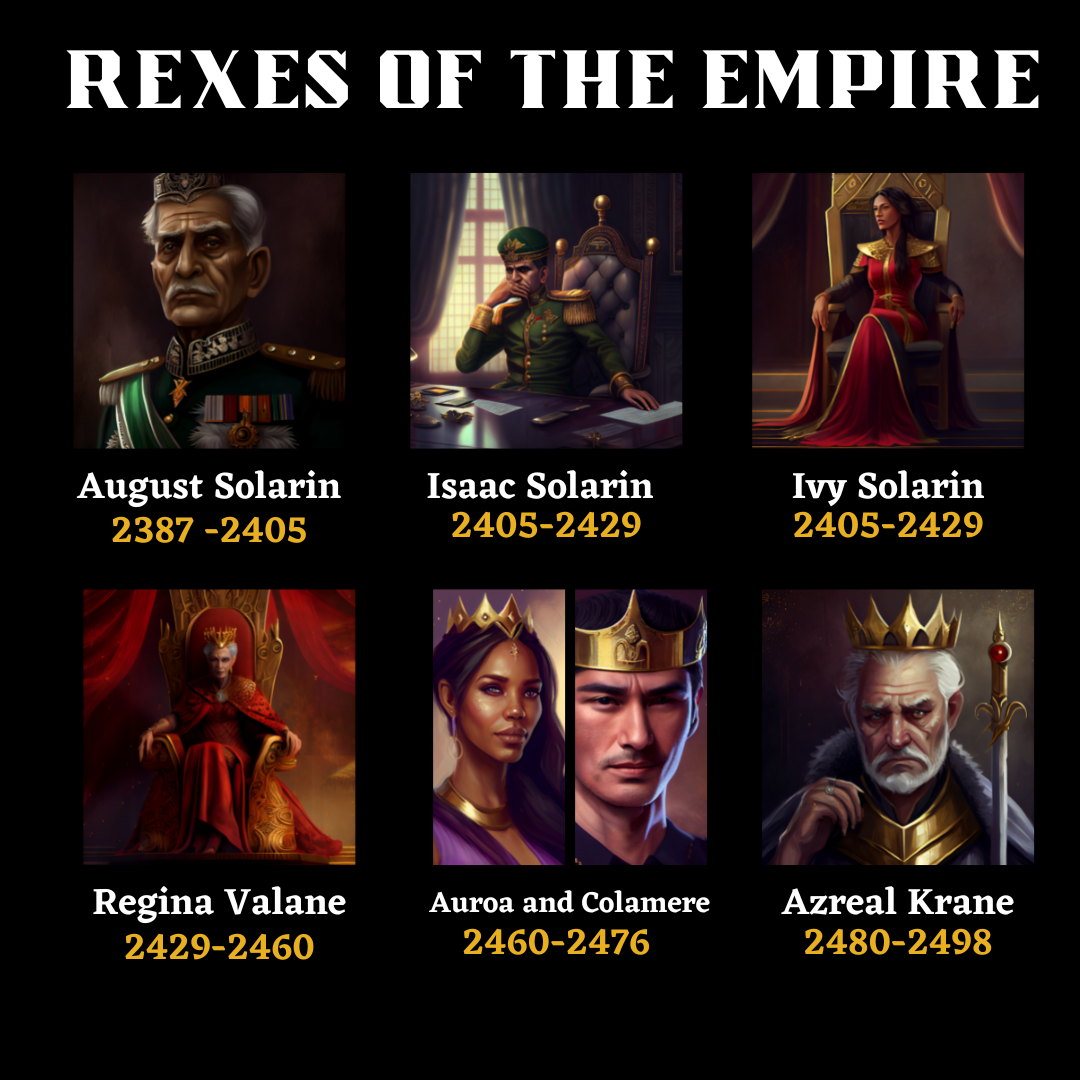 The Lord-Chamberlain's main duties are the maintenance of the Imperial Palace and the capital city of Dhaka. However, the Lord Chamberlain also possesses a lot of political influence due to their close proximity to the Emperor and are often considered the "gatekeeper" to power

The office of Lord-Treasurer became one of the "key" offices of state with the expansion of the Imperial bureaucracy and the treasury. It oversees the vast treasury which is responsible for gathering taxes and then setting out the Imperial budget

Chief of the Imperial General Staff

*Admiral Pavantarr was the first Indirian to be Chief of Staff. He was also the first Chief of Staff to be killed in action.
**Admiral Calqvist was assassinated, presumably by Karkouri Agents

Imperial Intelligence services consist of three branches of service: - Civilian Intelligence Services (CIS) headquartered on Earth. CIS deal with counter-intelligence, organized crime and preventing terrorist attacks and plots inside the Empire - Office of Naval Intelligence (ONI) headquartered on Earth. ONI deals with plans and intelligence gathering for the fleet and is the only agency that is entirely military lead. ONI's leadership are appointed by the Fleet All branches of intelligence are part of the Ministry of Communications and the Ministry is lead by Minister of Communications

Minister of State for Intelligence

The Empire fell after a catastrophic defeat to the Karkouri Regime in 2498 after Lord Marshall Decius Collingwood betrayed the Imperial Navy, costing half a million people their lives and wiping out all credible resistance. Whilst Emperor Krane intended to resist, the Karkouri Navy had the capacity to bombard Earth into rubble and the Council surrendered. Emperor Krane died of a heart attack at the scene and the Imperial government, with muddy authority, surrendered. The Karkouri then dismembered the Empire into several new successor states.

The Monopolies and Corporate Security Act 2420

The Existence and Intelligence Laws 2449

The Imperial Parliament was initially set up as an advisory committee. Over 1000 MPs were elected with a minimum of one per world and representation based on population. The Parliament was denied law making powers and was largely ignored   In the 2440 budget cuts, the Imperial Parliament had much of its budget cut, reducing its support staff, salary and expenses which saw 25% of the current MPs not seek another term in parliament   With the Democratic Reforms of 2462, Parliament has now been empowered with law making powers and even veto power over the Council of Governors   The new budget of 2465 saw MP's receive, as per their own vote, a per diem as well as reasonable expenses.

The Speaker of the House

The Parliament elects one of its members as Speaker of the House who will chair and oversee debate. They are required to resign any party or faction affiliation and be impartial. As per convention, no major party will then contest their seat in election

see the The Imperial Court of Appeals

There was major political and military resistance to the Empire and many worlds went into open rebellion. However, despite a few strategic victories, the Rebels never gained traction and in 2403 they agreed to disarm and re-join the Empire.

Articles under The Terran Empire

A Model Constitution for the Empire

The 2429 Imperial Conclave was the first "election" for a new Emperor.

The 2480 Conclave was the third "election" for a new Emperor

The Imperial Court of Appeals