Isaac Solarin was born in 2360 on Earth in the sub-Saharan region. His parents were subsistence farmers and Isaac remembers them as being kind and hard-working.   Both of them were killed during the JS1E1 outbreak in 2368. Isaac's older siblings were killed subsequently and Isaac wondered alone for two years, surviving off scraps before he was found and looked after by a Warlord force lead by August Solarin

August Solarin formally adopted Isaac as his son and Isaac become his unofficial aid-de-camp and was often given key messages to deliver and ran errands for the Warlord who went on to become the unofficial governor of Earth.   Isaac became a child soldier of sorts and took part in several skirmishes.

With the Imperial Coup of 2387, Isaac was elevated to Imperial Prince and, as part of the arrangement, he married heiress Ivy Valane. The two were married in a lavish, tightly guarded ceremony and initially lived on Mars at the Valane compound until 2390 when they moved to Earth and the Imperial Palace at Dhaka.   Prince Isaac's main roles were ceremonial, still working as an advisor and aide to his father. He was sent back to Mars to take several educaiton courses and a special curriculum was drawn up for him.   Princess Ivy gave him three children:

In 2394, Prince Isaac was formally recognized as the designated heir. He had finished his special educational curriculum which included law, economics, military history and political theory. He began a tour of the Frontier, meeting common folk across the Empire   In 2399 he was assaulted by a mob of hostile miners on Fort Verekker suffering major injuries. He went into a long period of recovery and took gene treatments from PINNACLE to recover.   2404 Emperor August Solarin announced that he would abdicate in 2405 and that his son would become Emperor.

In 2405 Isaac Solarin, just shy of his 40th birthday, was formally named Emperor of the Terran Empire. His ascension was uncontested and he was crowned in a low-key affair on Mars. His wife, Empress Ivy Solarin-Valane was planning his coronation when the Mutiny of 2406 broke out.   Emperor Solarin ruled jointly with his wife, conferring much Imperial power to her. Much of the day to day governance was given over to Lord-Chancellor Cort Yardley, his former tutor and a colonial governor.   Emperor Solarin agreed to consider sentient AI as citizens of the Empire in a landmark decision.

With the mutiny of much of the Marine corps along with around 25% of the fleet, Emperor Solarin faced calls to abdicate his office and allow reform of the Empire. He resisted these calls and agreed to meet the rebels at the Prosperity-Mount Summit, which was mediated and guarded by the Hansa.   Emperor Solarin agreed to key reforms of the Imperial government including

With increasing border tension with the Karkouri, Emperor Isaac Solarin gave the ascent to Lord-Marshall Maya Belzen and Admiral Lucy Stargher to begin "Operation Red Tiger", an attack on the Karkouri Regime. The operation was a high risk but hugely successful operation that destroyed 50% of the Karkouri fleet, crippling their military   Admiral Stargher was hailed as a hero and plaudits were also earned by Lord-Marshall Belzen and the Imperial family This helped to further stabilize Emperor Isaac Solarin's rule

Emperor Solarin appointed his former Lord-Chamberlain Joachim Brahms as the Lord-Chancellor and also worked with Lord-Marshall Maya Belzen and Lord-Treasurer Fulbright Nolan. His administration reformed taxes and asked for a ten year moratorium on AI development which Allied Technology agreed to follow.   Emperor Solarin continued to clash with both the Hansa and the Conservative wing of the Imperial Council. The merger of Allied Technology and West-Corp, which he was powerless to prevent, was a major case in point   Emperor Solarin attempted to reform the corporation laws with a major set of policies and edicts in 2420 lead by his Lord-Treasurer Albion Hawthorne. However the roll out of these new laws is poorly executed and it meets resistance from the Hansa and then the Imperial Council of Governors who veto the Emperor's new law, a first in the history of the Empire

In 2418 Prince Michael Solarin, a serving 1st lieutenant in the marine corps, was killed in action n a sweep and clear operation on the frontier. He was buried on Earth and this funeral was widely attended. The Emperor went into seclusion for a few months, leaving Lord-Chancellor Joachim Brahms in charge of the Empire   With Prince Michael's death, there was doubt over who the Imperial heir might be with Prince Alexander not considered to be suitable.

In 2424 a terrorist bomb went off in the Imperial palace in Dhaka, crippling the Emperor and the Lord-Chamberlain Lord Kreak Tancredo. The bomb also killed a dozen retainers and guards. The Emperor suffered massive head trauma as well as a broken spine and extensive soft tissue damage. He went into a coma and was moved to a secure location beneath the palace   The Emperor's coma prevented him from discharging his role as Emperor but power remained in the hands of Empress Ivy Solarin, at least in theory.   Isaac Solarin settled into quiet seclusion between 2425 and 2429 but announced that he would retire in 2429 in favour of his daughter, Princess Regina who would be the "preferatti" for the Solarin dynasty

Isaac Solarin officially abdicated his title in 2429, He moved to the vast Solarin estates in Dhaka where he worked on his memoirs.   Isaac Solarin died in 2445 aged 85 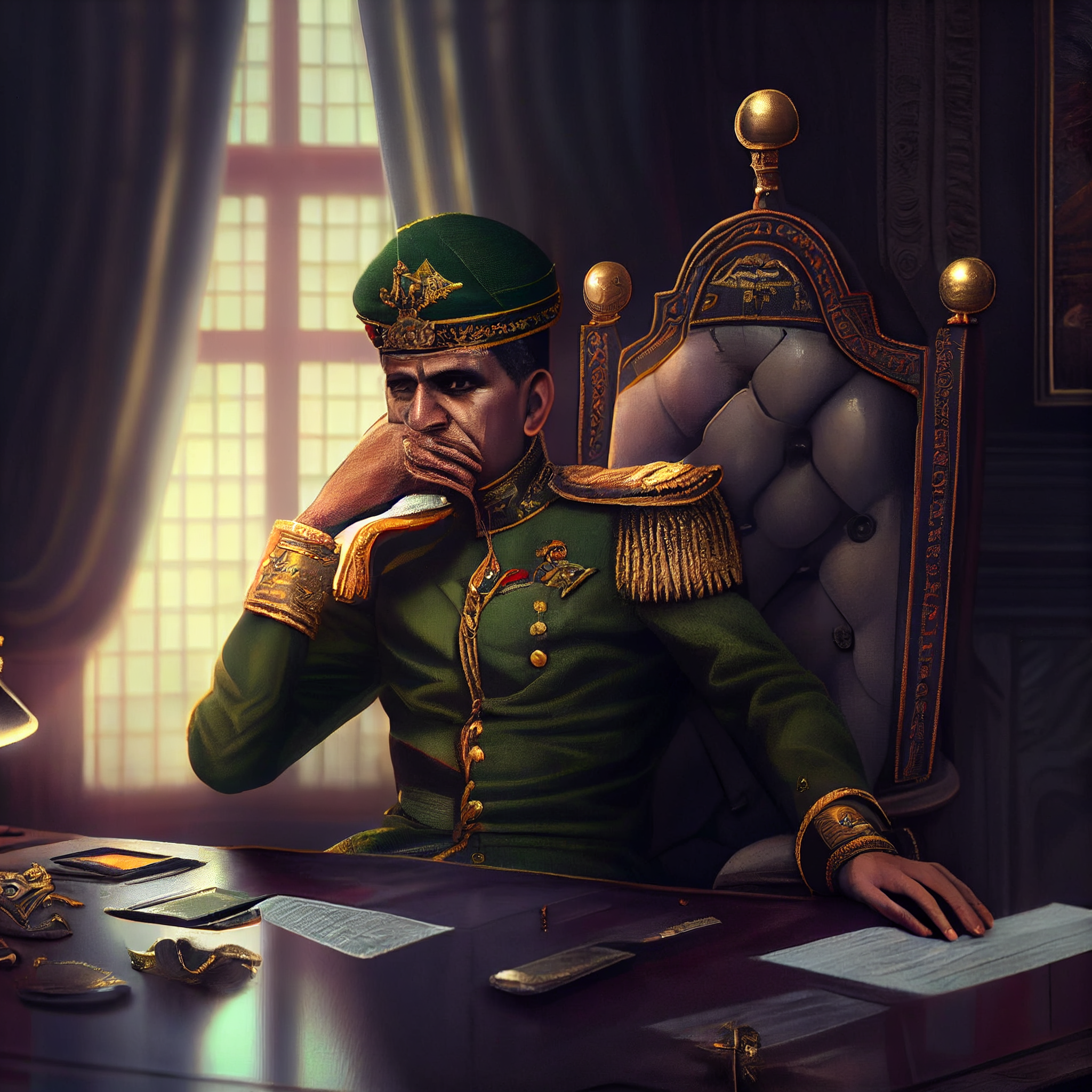