Orpheus Gaze    Dynasties      Solarin      Ivy Solarin-Valane
Ivy Solarin-Valane was a major political figure in the early 25th century. She was the second Empress of the Terran Empire and ruled as Empress-Regent for five years

Ivy Valane-Warwick (later known as Ivy Solarin-Valane) was born in November 2363, the daughter of Matildah "Tilly" Valane and Admiral Benson Warwick.     Ivy proved to be charismatic and popular as a child with a rebellious streak that got her into trouble a few times – enough trouble that she was threatened with Military Academy twice (aged 11 and 15) to put her back on the straight and narrow. Ivy only grew more beautiful, popular, and confident as she reached high school and had lots of friends across many social circles; she was an excellent student with strong grades, a cheerleader, a member of the track team, and a student reporter for the school paper. Her rebellious wicked streak found its way into her writing however, and she was warned on a few occasions to tone it down.   After high school Ivy attended Pyramid College on Mars to study journalism – her natural talent for connecting with people and getting them to open up had made the idea of writing more appealing. She was involved with several clubs at college, including the newspaper, though she did spend a lot of her time partying as well. She graduated with her degree in journalism and had a junior position lined up ready to start her career when the Imperial Coup happened. Ivy was married to Isaac in 2388 and her journalism career ended before it even started.

In 2387 the Imperial Coup took place. To seal the new Empire, a dynastic marriage was agreed between the "Heir" to the Empire, Isaac Solarin and Ivy Valane. The two married in 2388 and settled down on Earth. It was noted that Ivy struggled initially with her marriage to Isaac but after some low-level intervention she worked harder on the relationship, and it became a genuinely happy and supportive partnership.   Ivy also struggled with the expectations and limitations of her new title of Imperial Princess, a title that was meant to be purely ceremonial with Ivy’s main duties expected to be supporting the Prince and raising their children. Instead, Princess Ivy stepped beyond the background role and stood alongside her husband. Her natural ability at connecting with other people and with the political scene complimented Isaac’s talents well.   Ivy gave birth to three children:

Ivy took to her role as Imperial Princess with ease, becoming an influential and popular figure behind the scenes. Ivy was heavily involved with charity work on Earth using her position to shine the spotlight on various causes, and this only reinforced her kind-hearted reputation. She was a key part of the Imperial Palace, often seen at charity events, social functions and about in the capital city of Dhaka. The media was fascinated her with and she quickly became a beloved figure at Court and amongst the general population.   She was also closely involved in her children's education and played a key role in their development. As Prince Isaac was elevated towards his eventual succession as Emperor, Ivy was also elevated and played an increasingly important political role, helping to keep allies on side and be the public face of the Imperial couple.   Initially Prince Alexander was the defacto heir for both dynasties. However, he was eventually set aside for the more confident and martial Prince Michael.

When Emperor August Solarin I abdicated in 2405, Isaac agreed and set out a co-ruler-ship agreement with Ivy that named both of them as equal Emperors, together. This elevated Ivy and gave her powerful executive power, power she very rarely used.   After the death of her mother in 2410 Empress Ivy was granted the additional title of Grand-Duchess of Mars and seemingly took the workload of governing (albeit from a distance) one of the most influential planets in The Empire alongside the day to day running of The Empire in her stride.   From her more powerful and influential position Empress Ivy spent most of her time working the Court and hosting events to gather influence for her husband, and to develop support for the Emperor and his ideas. She worked closely with her brother, Admiral Benson Valane jr who was a major figure in the intelligence community, eventually becoming Director of ONI and then Minister of Communications.   Empress Ivy was noted for her support for the military, her support for the development of AI and her support for social causes, especially charities that helped children and the poor. During her time as Governor of Mars, she massively improved the quality of life for the poorest citizens and she clashed with the Hansa over it repeatedly.   Empress Ivy was a key ally to Admiral Lucy Stargher and the two were close. She also formed a good working relationship with Lord Kreak Tancredo, Lord Maece Hammond, and Lord Aldrich Collingwood. Empress Ivy had a famously icy relationship with Lord Brahms after he became Lord-Chancellor in 2410, a relationship that only worsened over time.

Empress Ivy and Princess Regina temporarily moved to Mars in 2417 after the Empress developed concerns for their welfare. To avoid media speculation around her marriage and any reputational loss to her husband the official line was that the Empress wanted to spend more time on Mars and that it was a perfect time to introduce Regina to the planet and the people that would one day be hers.   Tragedy struck in 2418 with the death of Prince Michael, Heir to The Empire and Ivy’s favourite son. Prince Michael was killed during a Recon mission covering the withdrawal of the rest of his unit. Ivy and Regina returned to Earth at Isaac’s request so the family could be united in their grief and find a new path forward as a strengthened couple.   With his death, Princess Regina was the new successor for House Valane .   Ivy kept her face veiled in public and wore black for a full two years following Michael’s death and arranged for statues to be built in his honour so that the Terran people would never forget their Prince and his sacrifice to ensure the ongoing safety of The Empire.   After Michael’s death Empress Ivy became interested in Valtanism, and although she never formally declared herself to be of the faith, she kept up regular meetings with representatives of the religion. She made political moves to shut down a planned Valtanist protest against Emperor Isaac and started sowing seeds to have a Valtanist representative at Court.

Empress Ivy was effectively sole ruler of The Empire following the terrorist attack that saw her husband crippled after a bomb detonation in the Imperial Palace in 2424. This proved to be an extremely challenging time for The Empire as there was a level of hostile resistance to Ivy without Isaac. The couple agreed, behind the scenes, that they would abdicate to trigger the Imperial Conclave in 2430, paving the way for Princess Regina to be the "preferatti" for the Solarin/Valane dynasties.   Empress Ivy was able to place Lord Aldrich Collingwood as her Lord-Chancellor, as she did not favour Lord Joachim Brahms as Chancellor.   During her administration she faced push back from her opponents in the council, chief of which was Lord Albion Hawthorne who pressed that her continued rule was a loophole. However his attempts to push back against her rule did not find sufficient support.   During her term she was able to pass an amended version of the Mergers and Monopolies act as well as dealing with a terrorist attack against St Lawrence. She also increased the fleet and intelligence budgets for the Empire and signed a Defence Treaty into law with the Gannid Commonwealth.   In 2429 the Imperial couple publically announced that they would be abdicating, and that Princess Regina would be the Preferrati of both House Valane and House Solarin. On 6th December 2429 Empress Regina was sworn in and the reign of Empress Ivy ended.

Empress-Emeritus Ivy temporarily returned to Mars to take on her duties as Grand Duchess of the planet. She preferred to be a “hands-off” Governor and left much of the day to day running of the government to her Cabinet. This allowed her to spend most of her time in Dhaka with her husband at his estate, and if she was needed on Mars it was only a short flight away. Ivy returned to Mars full time following Isaac’s death in 2445.   Ivy passed away peacefully in October 2460 aged 97. Her funeral was widely attended on Mars and Empress Regina delivered her eulogy. 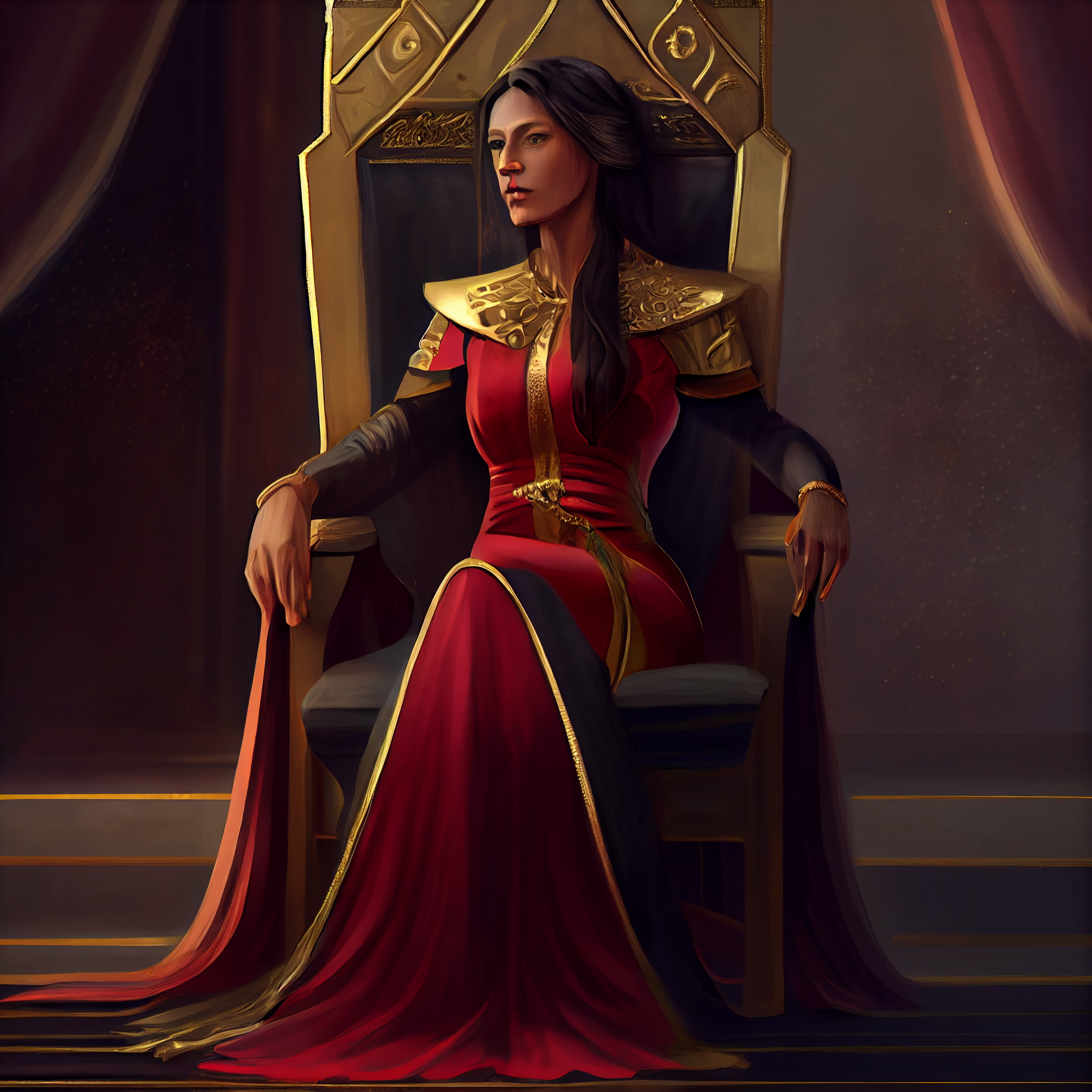