Orpheus Gaze    Dynasties      Valane      Aurora Valane
Aurora Valane was a major political figure in the mid 25th century and the 5th Empress of the Terran Empire.

Aurora Valane-Hammond (later known as Aurora Valane-Tancredo) was born in June 2434 in Old Chicago on Earth. She was raised in Dhaka and was a sweet, kind and well-rounded girl. She attended an exclusive prep school where she had real issues fitting in and problems with bullying and cliques. After a couple of years of struggling during high school she asked her parents if she could transfer. The headteacher of the school offered to take action on her behalf but Aurora, worried about the backlash, had made up her mind to attend a new school more suited to her needs. The change did her good and although she remained shy she was able to finally concentrate fully on her studies and spent the last year of school buckled down to graduate higher than previously anticipated.   The young princess opted to take a gap year touring The Empire and spent lots of time on Mars and New Corinth, before she headed off to Cydonia College to study Political Science in 2453. Aurora graduated from Cydonia in 2457 and immediately joined the entourages of her mother and sister. Aurora was noted to have good court manners, natural charm and charisma and a good eye for court politics. She was particularly gifted at diverting attention from Charlotte when the attention of the job got to be too much for her, and then handing the spotlight back when Charlotte had recomposed herself. This was one of the early signs that Aurora was destined to become her mother’s successor instead of her sister.   Aurora had an incredibly close relationship with her sister Charlotte and the two were often inseparable. She was also very close with her brother Desper, and with Iylah Collingwood. The four of them were more often than not found together and were the main support network for Aurora whilst she was growing up. Aurora’s relationship with Charlotte became temporarily strained during the run up to the 2459 Conclave, and for a short time after Charlotte’s disastrous television interview.   Aurora had a keen interest in social welfare and wider projects that would benefit the poorer citizens of The Empire. As was customary for an Imperial Princess, Aurora was involved with several Imperial charities but was particularly associated with children’s charities based in Dhaka and she strived to make sure that there was money, food and housing for the city’s homeless children.

Aurora had met Colamere Tancredo ,heir to House Tancredo, a number of times due to their parents' relationship during her young life but always from a distance and only for a few moments at a time, but it wasn’t until 2450 that the two met in a more formal way. Colamere made a good impression on the young Princess. Aurora was sixteen and developed a teenage crush on the young marine who was the protégé of Brigadier General Austin 'Ares' Valane, who was her favourite uncle.   Aurora and Colamere continued to see each other on occasion through their families or at events they were both expected to attend but it wasn’t until Aurora was studying at university that the two began a romantic relationship. Aurora chose to spend most of her second year study leave periods at her family’s estate on New Corinth and it usually coincided with Colamere’s visits back home. The relationship was a slow burning romance and the couple kept quiet to maintain their privacy knowing that it would attract media attention. In fact, the relationship had been going on for almost eighteen months before Regina discovered the two were more than friends after coming across a letter Aurora had written to Colamere.     In May 2459 the couple were married in a surprisingly low-key Valtanist ceremony. Aurora’s sister Charlotte, and childhood friend (and sister-in-law) Iylah acted as her wedding party.   The couple went on to have three children together:

Aurora was known to be a devout and committed Valtanist from a very early age, as was her sister Charlotte. Aurora attended seminars in Dhaka and in Bradbury City as often as her schedule allowed. Her faith was incredibly important to her, as was the desire to raise her children as Valtanists.   Aurora began meeting with the Valtanist visionary Lidia Hassir in 2470 and the two women became close friends, once Aurora had gotten over her initial mistrust of Lidia. Aurora was fascinated by Lidia’s ideas about how Valtanism should become more accessible to normal citizens of The Empire. Lidia was a regular advisor to both Emperor Colamere and Empress Aurora and was often seen in the Imperial Palace. Aurora asked Lidia to become her children’s spiritual mentor in 2474.

In 2459 Empress Regina announced that she would be stepping down as Empress, calling on a new conclave to elect the next Empress. It was expected that Princess Charlotte would be named as preferatti as she had spent the last five years as a Minister of State, seemingly preparing for a career in politics.   However, Empress Regina and Princess Charlotte announced to the public that Charlotte would not be the preferatti for House Valane and instead Princess Aurora would be her mother's successor.

The Imperial Conclave met in September of 2459. Lord Hayden Tancredo was the primary "manager" of the Valane conclave whilst Lady Teagan Yardley was supported by Lord Elliot Hawthorne as well as Lord Cabbot Brahms. Lord Hayden Tancredo, who had publicly announced his support for the Princess, was assumed to bring his conservative allies with him, though the split with Lord Kotek Grumman may have reduced his influence   Princess Aurora's announcement that she would name Lord Stafford Collingwood, the leader of the liberal faction as her first chancellor surprised many at the conclave. It was whispered by one or two lords that "this is already done".   Indeed the conclave was decided in just three hours on the first ballot.   Princess Aurora had received 15 votes against Lady Yardley's 9 and therefore was to be crowned as Empress. The assumption was that this would be alongside her husband, Colamere, as the Emperor and the two would agree to "co-rule".

Empress Aurora named Colonel Sedgwick Rains as her equerry, continuing on from carrying out this role for her mother.

Empress Aurora took the throne alongside her husband, Colamere Tancredo. Lord Stafford Collingwood was named as Lord-Chancellor with a plan for ambitious democratic reform which was narrowly supported by a majority of the Council of Lords   These unprecedented political reforms granted the Parliament the right to veto the Council of Governors (but not executive orders) with a 2/3rds majority and also granted the Imperial Parliament full law-making powers. It was also granted a voted in the Conclave   There were a series of terrorist attacks, largely linked to pro-democratic terrorist groups but in the end, Lord Collingwood was assassinated by a former marine officer who claimed that democracy would destroy the Empire. He had also planned to murder the Empress.

Lord-Treasurer Pike Cappotelli was elevated to Chancellor and took over the last two years of Lord Collingwood's term.   There was much debate over the direction of Terran foreign policy.   The Empress granted her equerry a life-peerage, creating him as Lord Rains.

Kotek Grumman became Lord-Chancellor in 2465 and would endure a stormy time as Lord-Chancellor of the Empire.   During his time as Lord-Chancellor the Empire was wracked with repeated terrorist attacks, especially by democratic groups. The worst of these was the major uprising on Mars, the so-called "August Uprising" which saw a radical left-wing militia capture the capital buildings in Cydonia and resist a siege for nearly three weeks.   There was also a rare veto for the Chancellor, as his plans to quickly uplift the colony world of Prospero was veto'd by the Council of Governors.   The Empress granted life-peerages to businessman Rafe Kroenen, Valtanist lecturer Dr Rebecca Coghill and to her cousin, Admiral (ret) Flint Valane.   Chancellor Grumman was returned to his office as Lord-Chancellor in 2470 and presided over a tough hewn conservative agenda. He suspended parliament in 2472 until 2475 and also implemented a moratorium on TND, which tanked the share price of the company.   The Empress also confirmed Justice Madeline Connelly to the court of appeals.   During this term, Empress Aurora conferred life-peerages to Merevald Lawton, Orseon Wiess, Dr Atkins Romily and Emily Aravedo.   This period also saw increased tensions on Mars, with the so-called "Mountain Wars". Many marines and police officers were killed by the various terrorist factions and the Empire was forced to deploy 100,000 marines to the planet.   Empress Aurora named Morse Tolliver as her Equerry in 2474, with Lord Sedgwick Rains taking up a role at court.

Aurora was incredibly close to her brother in law Kotek Grumman and completely doted on him, much to the annoyance of her husband. Aurora would write to Kotek often, alongside their other forms of near constant communication, and for many years he was considered her closest confidant. As such, Aurora was seen to be strangely lenient with him and would accept thoughts and behaviours from him that she would not have tolerated from others.     According to her journal entries around the time of Regina’s death Aurora came to realise that a lot of the feelings she held for Kotek stemmed from a deep-rooted feeling of guilt, rather than genuine affection. The Empress sought help to overcome these feelings and she started taking steps to distance herself from Kotek in 2475 to allow the relationship to heal on her side. The pair did not have time to mend their friendship and when Aurora and Colamere were assassinated in 2476 Kotek was accused of regicide.

With the "roach" invasion of 2475, Empress Aurora and Emperor Colamere were to be evacuated off-world to New Corinth so they would be safe if the capital fell.   Their shuttles were then destroyed in what was claimed to be a friendly fire incident due to faulty transponders. Chancellor and Regent, in the event of their deaths, Eleutheria Ashpool stated that renegade Lord Kotek Grumman was responsible for their deaths.   She was 42 at the time of her death, killed alongside her equerry Morse Tolliver and Paladin Avner Breedon. 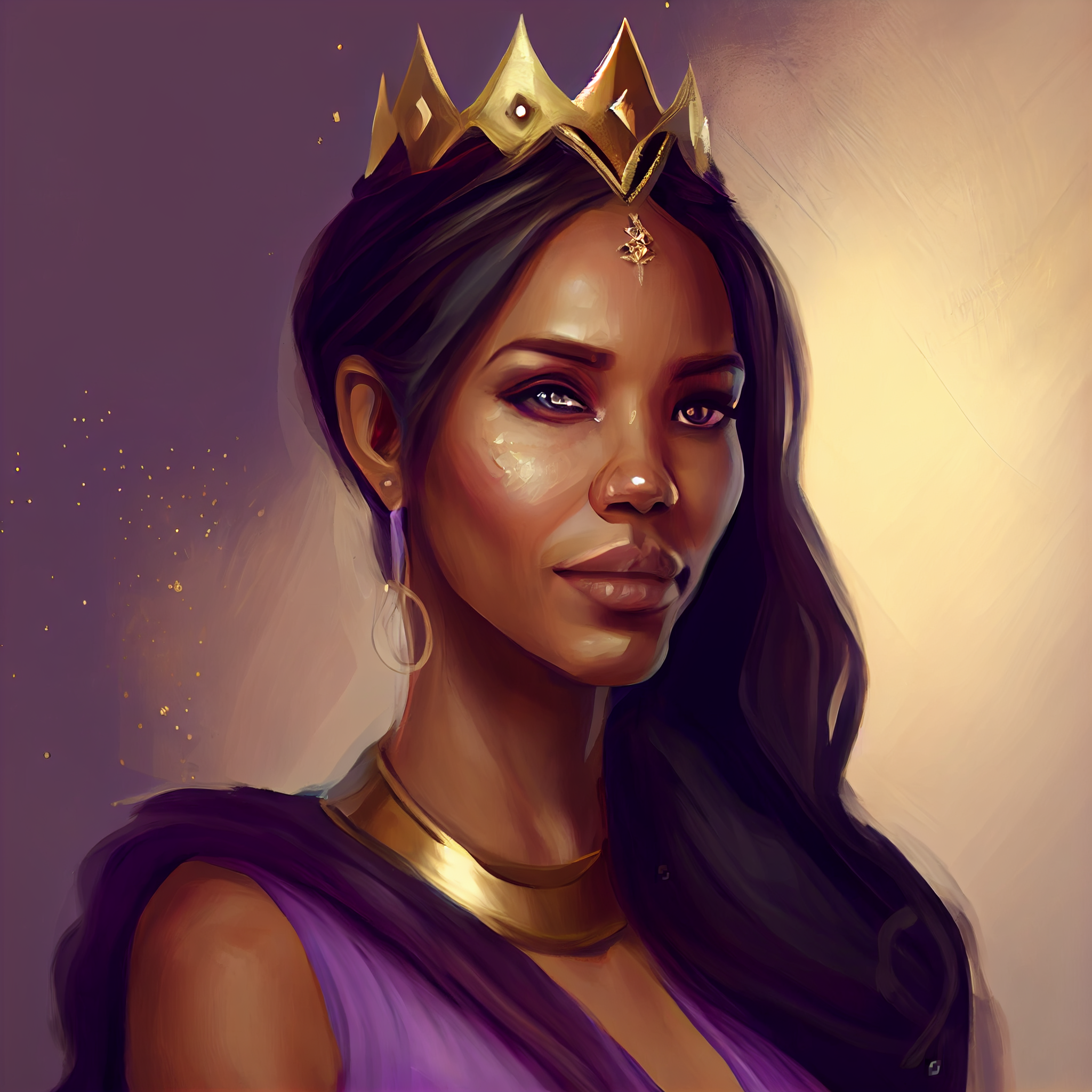