Umeros is a continent ruled by large nations: Empire of Islenor and Kingdom of Freynia in the north, Sultanate of Jubar on the south, with Aradace Tharur on the middle. Beneath its surface lies the trecherous tunnels of Szith Draethoz, dwarven kingdoms of Vugh Dorul and Thal Lodir.

But Umeros is also a home of the Scorched Mountains and The Wild Wastes, some of the more inhospitable areas of the world. Diversity of climates, flora, fauna and people make Umeros particularly regocnizable.

Continent of Umeros is found south and west from the Mirror's Deep, north from Southern Waters, and east from Treacherous Ocean. It mostly exists on the northern hemisphere, northest point at about 65° N, and its most southern tip crosses with the equator.

Umeros has three naturally formed mountain ranges: Dorul Peaks in south-east, Scorched Mountains in north-west and White Peaks in north-east. The continent is halved by a fourth mountain range, Scarback Ridge, one of the geographic scars caused by the The Cracking.

Northern Umeros is mostly forested area with several valleys and hills, disincluding the highly volcanic mountainrange of Scorched Mountains. As you travel towards the south, earth slowly turns in to a grassland and savannah, before hitting the Scarback Ridge. Where Dorul Peaks and Scarback Ridge meet, starts the desperately dry desert, northern part of it untamed and uncontrollable, thus known as the The Wild Wastes. Further south and at the western coast the land gets increasingly more fertile.

On the south-western side of Jubar Umeros has small area of rainforest, surrounded by tropical savannah. These areas face into hot steppes and desert, continuing all the way to the Scarback Ridge. The Desert scape is broken by the Shattered Canyon and the river running through it. These areas are known from terrifying wurms and strange desert creatures.

When travel takes towards the north, and beyond the Scarback Ridge, the ground turns to savannah and grasslands, giving living spaces for several different types of dinosaurs. But as further north one goes, the forests intensify. Scorched Mountains is home for deadly wyverns, and Dire Wolves roam the forests of Islenor. 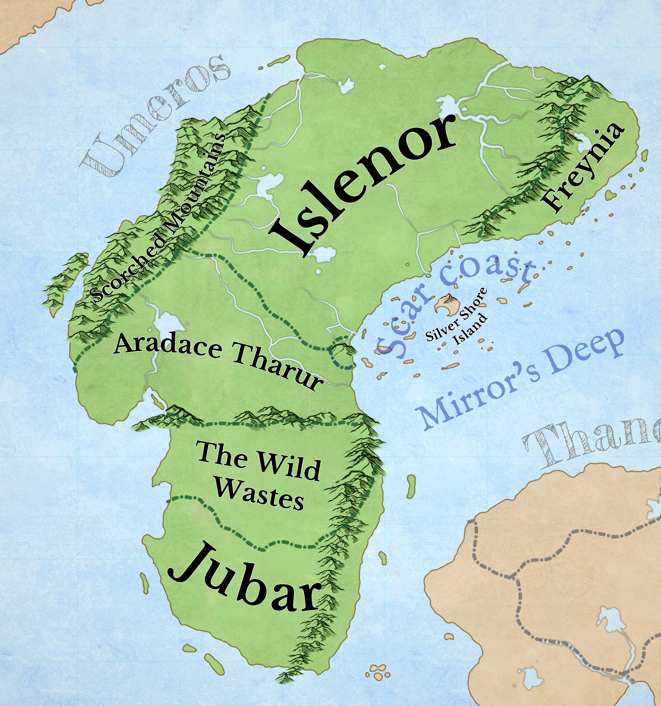 Melyria is a custom roleplay setting made to work with Dungeons & Dragons 5th Edition by Tiirikka and friends.
Melyria draws is inspiration from several Dungeons & Dragons settings and their lore, mainly from Forgotten Realms.
Dungeons & Dragons belong to Wizards of the Coast and I claim no ownership of it.
Melyria and it's quirks belong to me and getting inspired is very much allowed and credits appreciated!
Cover image: Melyria cover, eyes from digital painting "The glare" by Tiirikka
Article template
Geographic Location
World
Melyria
Category
Landmasses in Geography
Author
Tiirikka
Publication Date
5 Apr, 2020
Creation Date
16 Dec, 2019
Last Update Date
19 Dec, 2019
Visibility
Public
Views
571
Favorites
6
Comments
0
Work In Progress
Tags
continent umeros