The Invasion of the Sunset Valley

One afternoon in this fateful summer, a hunting party from the Dhòdani tribe came into contact with a group of wandering foreigners in the forests of Tadanlu Zêfhu. When they approached the short-faced people, suspicious of the armored warriors among them, a woman in blue and green robes stepped forward. She greeted the hunters with outlandish words, using sounds that none of the neighboring tribes' languages contained.   Since the warriors remained passive and the other members of the group appeared friendly, the hunters invited the strangers to a meeting with their village's elders. Even the elders could not make sense of the spokeswoman's words, but eventually the shaman succeeded in establishing some common ground by offering the visitors several etuide to eat. Smiling, the spokeswoman called for one of her followers to hand over some of their own supplies, which included dried fruit named chýrit and some form of meat jerky.   To strengthen the bond and to satisfy the growing curiosity of the other villagers, the elders decided to give the foreigners shelter and organize a spontaneous feast this evening so that everyone could get to know each other better. While the warriors among them never seemed to let down their guard, the civilian Nimýrité soon engaged with the locals, pointing out their names for various objects, trying out musical instruments and tools or playing with the village's children.

As the days passed, people began to notice that their guests were quite assertive in their interactions. They were quick to demonstrate their own manner of doing things, but became kind of irritated when the villagers continued to perform tasks as usual. Over time the foreigners became bolder and more impudent, interfering with the people's daily activities to correct what was not wrong.   One day however, the spokeswoman - who was now known to be a so-called bycópa of the Nimýric sun deity - decided to interrupt the shaman's worship of the Phaini Mivani, the Sacred Elements. When she walked up to the shaman mid-chant, pushing him aside to start preaching from the bundle of papers she carried with her, the villagers were rightfully fed up with the strangers' overbearing attitude and chased her out of the temple.   Unfortunately, this gave her warriors an excuse to draw their weapons and lash out at the villagers. They slaughtered several unarmed civilians before the village's own fighters arrived to take care of the threat. The Nimýrité were driven out of the settlement and disappeared into the forest.

Three days after the initial skirmish, much to the villagers' surprise, the Nimýrité returned in the early morning hours with about twice as many warriors as the entire village had inhabitants. Only a handful of people managed to escape from the ensuing battle and flee to neighboring settlements. With them they brought reports of how the enemies dragged men, women and children out of their homes, shoved them into the dirt and brutally murdered those who tried to defend themselves against this mistreatment.   But the fight did not end there. Over the following months, the Nimýrité continued to travel all over the valley, playing their deceptive game where they could. Whenever they were found out, either by crossing the final line or because the Dhòdani in question had been warned by earlier victims, they quickly resorted to violence. Those who were not outright killed were seduced to betray their fellow tribespeople or made to follow the invaders' orders by holding family members hostage. With these insidious tactics, the Nimýrité brought the entire valley under their control within less than two years.

News of the conquest quickly spread to the rest of the Dhòdani tribe and from there to the neighboring tribes. This greatly changed the political landscape in northern Qùgêzuia as the people tried to prepare for the threat as best as they could.

Tadanlu Zêfhu, the "Sunset Valley", became widely known for the outrageous aggression of the Nimýrité. For this reason, a depiction of the valley was chosen for the flag uniting the Pereqaian Alliance against the common enemy.
Musical Theme
Legend... 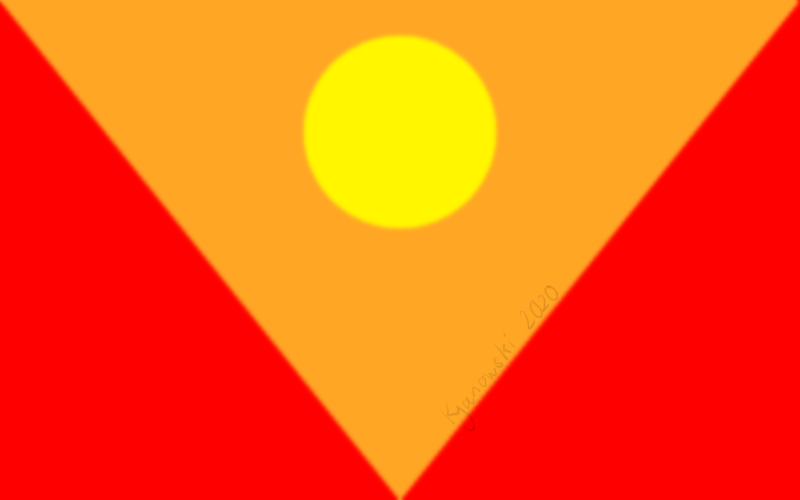 Competition Homepage
In response to the prompt Write about a conflict in your world known for being unprovoked or unfair.

Those poor people. I very much like your take on this prompt, even though I do not like what happened to the Dhòdani tribe.

Thank you very much, I'm glad you enjoyed reading! If it's any comfort - the article is from the Pereqaian point of view, so there's a chance that some details are exaggerated to cast the Nimýrité in a particularly bad light.