The light shone through the colored glass, creating a painting of colors on the floor near the water pool. The room was filled and most of the people inside were gathered around the water pool, were the little boy had just received the blessing mark of the earth

The temple-shrine of Bechlea was the second most important shrine for the Kingdom of Edrea , only topped by the The Shrine of Aralican. It was located in the heart of Bechlea , and it did a lot to bring the different ethnicities together through rituals and gatherings in the temple. However, it was destroyed and now only the ruins of the Temple are left, to remind everyone of the time before the wars, the time with magic and the time without [magical combustions] which killed way too often.

The building was built back in the beginning of the Kingdom, but the shrine itself has existed for many more years than that. The temple was built in another style than most buildings in Bechlea, it signifies that the building was something unique and special within the town and not just any other old building. It was built with a light colored marble stone, giving it an ethereal look when the rays of the sun would hit it in the early hours of the day.

The building was big and had a lot of details, both on the outside and inside walls as well as the general form of the building itself. The most characterisitc detail was the front, which consisted of 3 arches. The center arch was taller than the other two, and above it was a circular window in stained glass. These arches and the window were the front of the building and still remains more or less intact today.

Floor plan of the temple-shrine 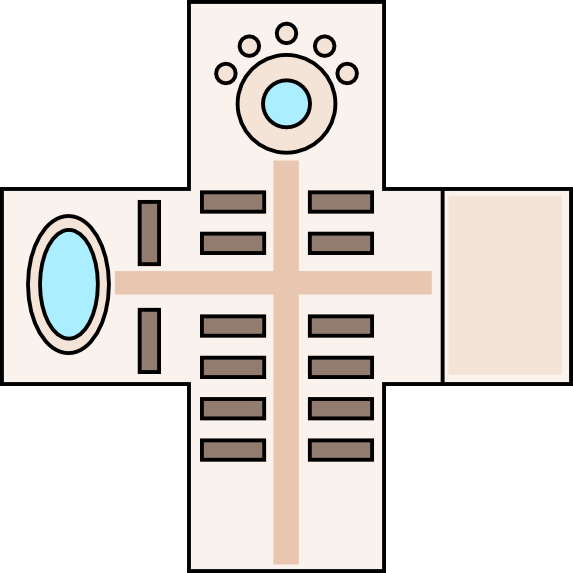 The temple has a + shape, the water pool is located in the far back and there is another stained glass window behind it so that when the evening sun comes, the pool is bathed in an abundance of colors.

To the left is the pool of goners and to the right the caretakers quarters.

The shrine is located in the area of Bech, were the city of Bechlea draws its name. The shrine was constructed by shrine builders from Relden when Lord Chren and Lord Pallem had an alliance against the lord of Olcha. The Lord of Olcha had blocked the way to the The Shrine of Aralican and the people of Bech had no way to access a shrine without travelling through Olcha to get to Relden.

The temple was ruined a bit under the first great war, but was rebuild by the citizens with knowledge about magic and shrine-building.

Under the second Great war, the shrine was destroyed almost entirely by the Idrish army, they also killed many with magical knowledge and burned the books in the library nearby. The books on shrines and how to harness a magical location’s powers were all destroyed.

Many have since tried to get the shrine to work again, but with no luck.

If someone had the knowledge to rebuild the shrine it might be able to work again, but that would only be possible if someone was able to regain the knowledge of shrine-building.

Though the shrine is in ruins now, it was one of the last shrines to stay up in Edrea. Shrines in both Edrea and Ildres were ruined by the opposing country’s army to make sure that magical individuals wouldn’t keep coming and cause destruction.

Though the building is no longer working the way it should, it’s still in use. So are many of the shrines that were ruined during the wars. They are still used by the citizens around Morlea to carry out rituals which were usually done around the shrine of Aralican or the minor shrines.

Traditions before the Destruction

It was a traditions to go to the Shrine of Aralican or other shrines for the Aventing, which is where the children born the last year are taken and dipped in the water pool of the Olchari. The child may be blessed with a mark or the shrine reveals that the child may have magical powers which can be unlocked later in life.

Another traditions linked to the shrines are the Transerion where people gather at the Pillar of the Goners in the shrine of Aralican or the pools of the Goners in the other shrines. Here people throw flowers into the water to give the ones who died in the last year energy to cross over. It is said that when a flower wilts, a soul has crossed safely to the other side.

Human traditions after the Destruction

After the shrines were ruined they no longer hold the power they used to. No children are blessed with marks and the magic within a person can no longer be revealed. This may lead to horrible things such as Magical combustion .

The humans in Edrea have made the old traditions work in a way so that they can be held in the remains of the shrines left all over the kingdom. They still use the temples and the shrines, even though they no longer hold any power. They still gather in temples for the Aventing, though the only thing that actually happens is that the child is written into the register of people.

The shrine is used for sending of loved ones into the afterlife as well. It has become normal to use the water of the olcharions in the temples to rinse a deceased to try and ensure a safe passing without the help of magic. This version of the Transerion is often refered to as either Flosaqe or Flos Aqenton. Answering: "Describe a building that was once a grand place, but is now ruined."
Visit ninne124's Competition Page Check all other answers to this prompt Competition Homepage