Dr. Julian Pelforth lives in self-imposed exile somewhere in the Distal Tesseract. From his hidden bunker deep beneath the soil of an alien taiga, the Verdant Order's own mad scientist continues his heedless experimentation in pursuit of the 'perfect verdial,' a being capable of thriving in the darkened places where most other sentient beings dare not tread. This facility, an abandoned research outpost for scientists working with the Petalcap Vale Customs Authority, was once called In-Field Laboratory 7; now, for Dr. Pelforth and his crew, the place is known simply as Pelforth's Outpost.

Hidden, fortified, and well-equipped, Pelforth's Outpost's current purpose is to serve as a base of operations for Dr. Pelforth and his band of Scions Ambidexter to pursue research regarding the creation of racemic verdials away from the prying eyes of regulatory bodies. As a member of the Verdant Order, Dr. Pelforth is singularly focussed on the improvement and promulgation of the verdial phenotype - regardless of the costs or risks.   The outpost's secondary purpose is to serve as a development house for the Order, creating various chemical and biological products to either enhance Order members or harm their opponents. These include combat stimulants, poisons, psychotropic agents, and even specialized guard creatures.   The outpost's tertiary purpose is to serve as an organizational redoubt or hideout in the event that the Order is pushed to the brink of annihilation by some outside force (i.e. a string of targeted assassinations by Bards-Recursant). Even so, should this come to pass, Dr. Pelforth is unlikely to suffer non-scientist members of the Order for long, subjecting his new charges to 'perfection' in return for ensuring their continued safety within his domain.

The front entrace to Pelforth's Outpost sits at the end of a vehicle tunnel that spirals down into the earth, depositing visitors on the bottom-most floor where security and decontamination facilities can process them. This tunnel terminates in a widened parking area for official vehicles. Two crew-served machine gun emplacements flank the reinforced steel airlock leading into the outer sally port.   The facility entrance itself is a pair of sally ports bookending a decontamination chamber large enough to service several auto-armor units. The chamber and its sally ports are each flanked by manned observation and control booths, allowing security officers to check the identity and clearance of all visitors. Should unauthorized visitors somehow manage to breach the decontamination chamber, another set of crew-served machine guns wait in the foyer beyond, and armored units can be brought to bear on the intruders at a moment's notice.   A little-known emergency egress tunnel can be accessed either from the operations center or Dr. Pelforth's quarters. The surface end of this tunnel is very well hidden, as it is never intended to be accessed from the outside. Activating the facility's self-destruct starts a silent 20 minute timer; at five minutes to self-destruct, the facility intercoms announce that the facility will be destroyed at the end of that duration. Importantly, activating this self-destruct mechanism pass causes explosive bolts in the northernmost wall of Dr. Pelforth's quarters and the operations center to fire, revealing the hidden passageway. Once the operations team and Dr. Pelforth have been evactuated - or once the audible countdown begins - charges along the tunnel detonate and collapse it behind the command staff. This can be delayed at the option of the command staff to allow other staff members to escape more quickly, but only by activating a dual-custody lock in the operations center. Importantly, once the hidden passageway is collapsed, the self-destruct can no longer be stopped even with both sets of keys for the dual-custody trigger.

The outpost was formerly an official research outpost for the PVCA. This facility was a collapsible geodesic dome and outstructures which was then partitioned through the use of internal cellulomold walls. Hazardous research was conducted in rooms prepared with impermeable fluoridated polymer membranes. This original base was abandoned, however, in the aftermath of a black sun event.   Much later, when the fugitive Dr. Pelforth went into exile and took his followers with him, the band discovered the crumbling remains of IFL-7 and the construction equipment used to assemble it. In time, they dissassembled the old structure and moved it into the mountains, using the old structural elements as shelter while they searched for an appropriately secluded copse. There, in a depression, they reassembled the building and buried it, gradually sculpting the terrain until it looked natural again. A combination of scavenged parts and the occasional discrete air-drop from Order-affiliated airship captains allowed Dr. Pelforth and his crew to build up and fortify the outpost as it now stands.

The base is built around a central atrium that occupies the core of the structure, with crew members spending most of their time in or around this place to satisfy their need for social interactions. Banners depicting the Verdant Order and Petalcap Vale colors hang over the atrium to remind the crew of where they came from and what they are working towards.   The labs, prison block, and main thuroughfares of the facility are whitewashed and starkly lit for a variety of reasons, not the least of which being that this allows the scientists to detect contaminants in the environment and ramediate them in short order. The living quarters and perimeter sections, however, are designed with vale verdial creature comforts in mind - numerous hydroponic planters, sun lamps, and wood furnishings burnished with long use. If captured, the base would make a satisfactory (if small) agri-mine for workers who could set aside superstitions surrounding the amount of suffering and death connected to the place. Pelforth's Outpost is kept under extremely strict security by its complement of Hands of the Order and Dr. Pelforth's elite Scions Ambidexter. Every compartment of the facility has been designed to minimize the chances of discovery, escape, infiltration, or cross-contamination.

The outpost's location in the hostile Distal Tesseract makes it difficult to detect through aerial reconnaisance and hazardous to approach even if detected. The base's underground location protects it from bombardment and limits its footprint on the surface, making aerial attack even less of a viable option. The redoubt is best attacked with infantry or armor, but the environs are rife with dangerous local flora and fauna, including Distal polyps, Distal urticators accustomed to the presence of Dr. Pelforth's people, and patches of shardleaf along the easier trails.

Many doors, especially those leading into the laboratories, prison block, or operations center, can be controlled remotelyfrom the operations center via the facility's command autonet. The command staff can institute a lockdown, preventing these doors from opening under local control.

While Dr. Pelforth and his science team are more interested in keeping their own samples uncontaminated than the risk of contamination from the labs spreading to the rest of the base, this does not mean that it is safe to explore the labs without proper protection. The decontamination chambers in the chemistry and biology sections use a highly irritating combination of anti-microbial agents, buffering compounds, and surfactants to decontaminate those entering or leaving the labs, requiring the use of special hazard suits. Samples include Distal polyps and possibly aggressive razorback variant pups. While the computer lab is not hazardous per se, it is quite stuffy and, should the exhaust vents become blocked, a serious suffocation hazard.

Dr. Pelforth and his crew are defined by their utter lack of scientific ethics. In the course of trying to spread and 'perfect' the verdial race, they have subjected countless sentient and non-sentient creatures to torments best left to the imagination before ultimately disposing of those deemed uncooperative or unsuccessful. The evidence of what has been done in the base can be used to inspire fear in attackers and infiltrators while also serving to keep the crew in line - after all, a crew member who fails to uphold the efforts of the Order might be in need of further 'perfecting' themselves. Dr. Pelforth's crew have little need of this encouragement, however, as they are all fanatical adherents to Dr. Pelforth and his cause.   A successful rescue effort for the prisoners held at the outpost would create unexpected issues for the rescuers, as many of these sorry individuals are either in no condition to travel or have been somehow trapped under the thumb of Dr. Pelforth (i.e. through lethal addiction to chemical agents). The outpost's crew is also not above taking hostages or threatening harm on remaining prisoners to prevent rescuers from escaping. In short, Pelforth's Outpost is a difficult challenge especially for would-be attackers with a desire to keep a clear conscience or uphold certain ethical ideals.

Pelforth's Outpost has the ability to self-destruct (see Entries). This serves to sterilize any dangerous samples kept within the facility, cover up the evidence of the atrocities committed there, and bestow final vengeance on anyone who might seek to take over the base for their own purposes.   The self destruct system operates in several phases. First, all security doors close and thermite charges weld them shut, preventing escape. All exterior vents are blasted close except for lengths equipped with inward-facing valves, allowing oxygen to get in but not out. Large amounts of hydrogen peroxide, alcohol vapor, and biodiesel vapor are dumped out of vents throughout the facility, making the place hostile to most microbes while also adding incendiary accelerants to the outpost's atmosphere. Finally, the base's many dieseltech devices, including those in the computer lab and bottom floor, are configured to runaway, destroying them and igniting the surrounding atmosphere. Secondary incendiary devices trigger in the laboratories and prison blocks, torching any evidence to be found here.   Should an explosion not ensue from the dieseltech runaway, destroying the facility outright, the flammable vapor is continuously piped in over the course of the next several days until expended. Thus gutted and weakened, the facility will collapse inward, entombing any evidence not incinerated in the fire and likely sparking a localized forest fire to further degrade the crime scene. This process almost assuredly violates the Medial B Accords, of which Petalcap Vale is a signatory, but the Verdant Order is seldom troubled by the legality or morality of an action so long as it serves their long-term interests.

Nobody, even members of the Order, visits the facility without explicit authorization from Dr. Pelforth or one of his direct subordinates. Most business is either conducted by encrypted RadNet transmission or, in the case of lab resources and products, via concealed dead-drops in the surrounding alpine forest. 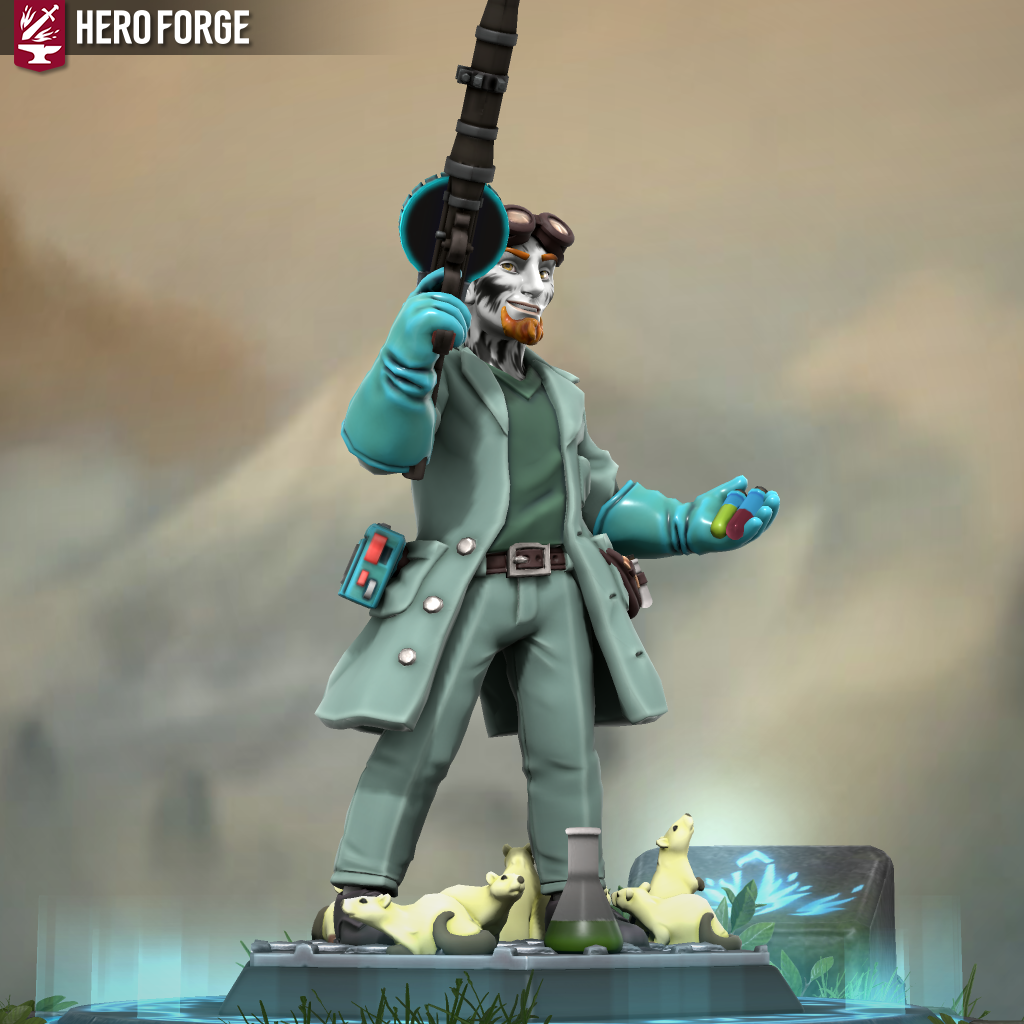