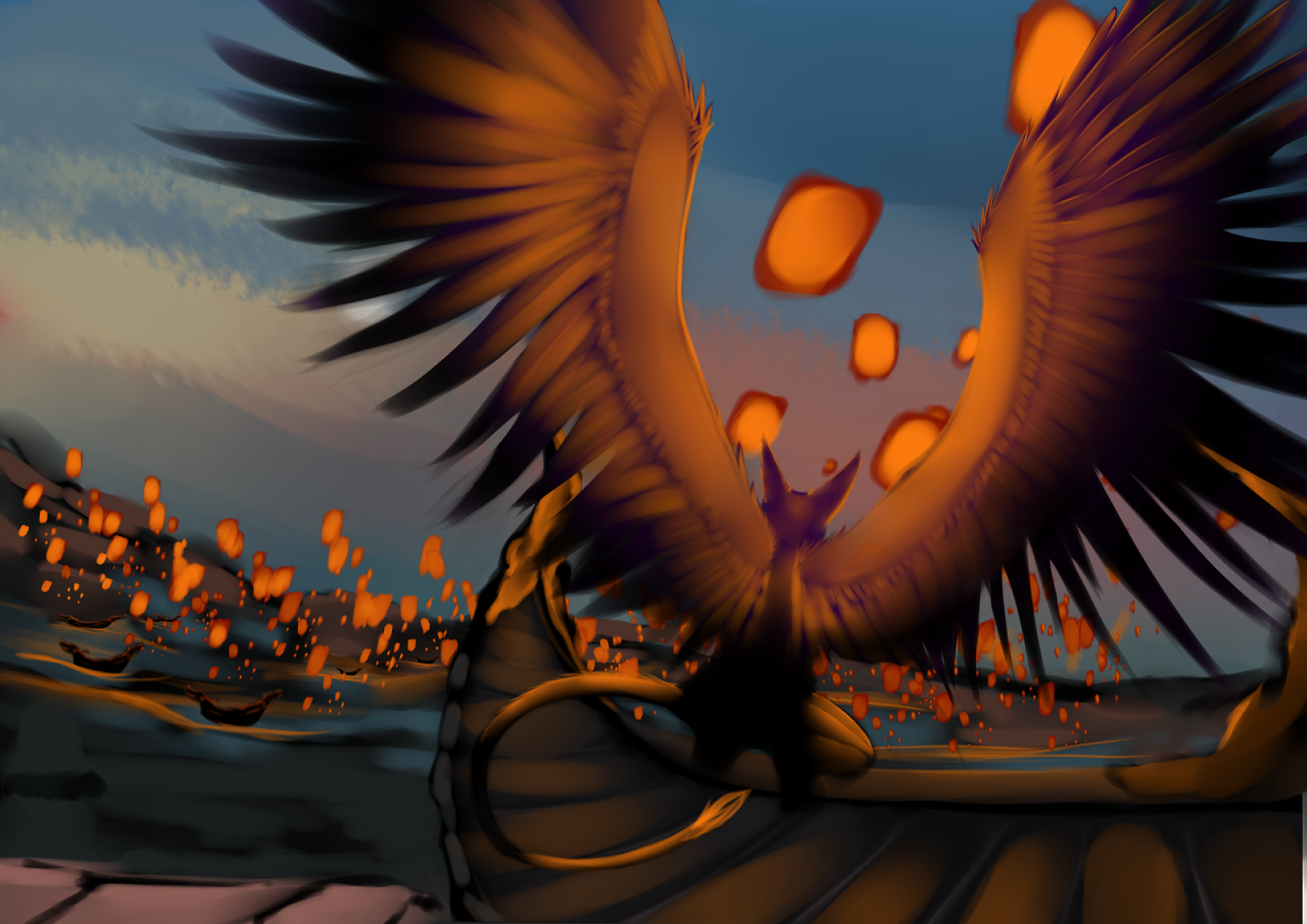 These people are the most optimistic people in the world. Along with their optimism, they bring their very spiritual minds to the mainland. Now their society is in debating equality at all levels of society.

The griffirca are a mix between avians and mammals. Their upper body is avian, typically a predatory bird . The lower body is that of a mammal, typically a large feline such as a lion. On their back are two feathery wings that can support flight. Their feathers and fur vary between individuals, but the most common colors are on the natural spectrum (black, brown, tan, white, etc)

When a female become pregnant, they bare this "clutch" for about eight months. She will carry about two eggs at a time and is unable to fly without getting nauseated. When the time comes, the "hen" lays the two eggs and takes care of them for another four months. At around a full year, the eggs could hatch at any time.

The griffirca prefer a warm climate,access to height elevation, and large bodies of water. As such the coast of the mainland and Airithrea are perfect places for them to live. They typically use stone structure to live in.

They are surprisingly omnivores, but not as much as a human or orc would be. They will typically consume mostly meat, but may have small amounts of grains and fruits.

They are quiet smart compared to the other races with a 7/10 on the Glenhook Scale. They excel at applying given knowledge to situation to find the best course of action.

Their sight in greatly improved by their avian eyes. Typically their eyesight is double that of humans. This is due to their special muscles that can retract over their eyes. This muscle is translucent like a lense to enhance far off details and prevent the sun from blinding their eyes.

Thier name is given to them by the Solar Monk that helps deliver their egg. The family name is taken by the male.   Male: Aiolos, Deimos, Heros, Lykos, Phrixus   Female: Aella, Daphne, Kirke, Polymnia

Males tend to desire being charismatic and a wordsmith. Clothing should often not be loose.   Females desire perfect hygiene and more loose cloths.

Males should be the energy of their community. They get things started and should be proactive. The front-line optimist.   Females are the backbone of society. They are strong, tough, but considerate. Its expected that they keep people together. The hidden optimists.

Females are not allowed to court males. The males must initiate the relationship, but the female can deny him. In the beginning, males will actively attempt to woo their potential mate through gifts or writing poetry. The females will want something as proof to their dedication for a relationship. Failing to do, so can result in rejection... Or just being an awful person can result in that as well.

Griffircas practice polygamy in their early stages of life. Males are looking for their true match. It's up to them to find it. They only known for sure when their first chick hatches. While this seems very barbaric, our studies have indicated that their biology seems to change during these moments. It's as if a lever is flicked that determines the partner's success. When a mate is finally chosen, the two are fully monogamist to each other.   The two will live together and rise their young. It's up to both parents to take care of them. Typically, the male will teach them social and community-based ideas while the female with teach more about physical and mental care. Another point we should express is the bond they form. Once connected, they are mentally bond. They figuratively share pain when each other are hurt and they are two halves of the same whole. If their relationship ends due to conflict between them or one of the partners dies, it can end in a catastrophe. Suicide is common when this happens. Generally, there is nothing we can do.

Their poetry and short stories are masterpieces in the world. Their solemn tones have defined how the written word is used in many cultures. Their people are wordsmiths and is a sport to make such beautiful words.

The island had plant material that made really light and strong paper. This developed into paper making as an art form. It's also been used for their airships to use as balloons.

The lantern festival is held yearly since the barrier is first formed. The lanterns are paper made to fly out into the sky. It used to be used to test to see if the barrier was still strong, but it slowly became a festival of morning and happiness. The first half, towns are filled with games and fun food to honor the year of struggle. The last half it the lighting of lanterns to represent the people lost that year as well.

Their region built around the Sun God which has blessed them with powerful solar magics. They are his children and were sculpted in his image. Being as bright as the light he provides is an important tenet.

The griffirca population has been trapped on Airithrea for years until the tear of magical energy was finally lifted around the island a few hundred years ago. Historically, we didn't even know they existed and to what extent. From what we could gather, their world has been broken up into three distinct events, The Chaotic Times, Isolation, and Release.

While we have found no evidence on the mainland of their presence, but their history says otherwise. It's said they had communications with the "moon-hearted snakes on the mainland" or what we believe to be the Narigita. This would mean they were around before the birth of Aulus Imperium which would be ground breaking. Any ships they sent to colonize the desert coast were destroy, we believe, but have yet to send an expedition to investigate.   If this is true then the barrier was not made until later in their history, something maybe the Scion's Circle could elaborate for us. Beside this, their country covered about 1/3 of the island and were very tribal having yet reached any sort of metal working. This is likely why they never were able to leave the island.

The time of isolation was disheartening to their people. I huge magical barrier from The Dreamscape appeared killing anyone who touched it. Even flying over it was impossible. (There are rumors that someone might have. I'll dig around and see if I can find the text on it for you). While this was a challenge, griffirca are known to be a positive race. Their history suggests that a culture explosion happened as it brought many of them together against a common threat. Much like how the Aulus Imperium formed, the tribes fought and conquered each other until one king rose above them all, Radovan the Great. Like all great kings, once his people were under one banner, he turned to their neighbors to take even more.   Radovan the Great lead them into a time of prosperity, but also war. For centuries the two nations fought until only about hundreds before the barrier would eventually fall. The griffirca who once had 1/3 of the island, now had 7/10 of the land. With the new resources, their technology expanded allowing them to experiment against the barrier. With new weapons they could retain their land without threat. Urban design was improved to house more griffirca in a smaller space and food production was made more efficient. This growth was exponential. However, it would not last like many things. Overpopulation was an issue and some even considered a one birth policy. Some even though to a death lottery to choose who died was an option. It almost fell that way, but will a little griffirca optimism, they lasted until the barrier's sudden disappearance. Opening them to the mainland once more.

Once the barrier fell, they had many options. At first, they sent scouts to see what was out there. Their old history told tales of a massive continent, but that was thousands of years ago. The scouts landed on what it today the Sor-Ta Empire and Aulus Imperium. This didn't end well, and the Imperium saw this as an act of war. The Imperium readied their navy against... nothing from the sea anyway, but their airships decimated their fleet. The barrier encompassed the majority of the sea around them. They had no need for boats, so air travel was the next best thing. When the first warship did land, the world community was astonished expect maybe the Scion's Circle. But the griffirca didn't send a army to meet the war ship. Instead a diplomatic envoy was sent instead. Negotiations began on that beach to discuss the situation. A month went by before the Imperium granted them a deal. In exchange of sea access, which the griffirca could easily take from their island even without ships, they would allow migration access to Fairley and Lor-Ta. They agreed.   Years have passed since then and talk of an alliance between the two has been rumored, which would be the first deal of that level with the Imperium since the Carawand Monarchy. Airithrea has become a popular place for tourism and study on its unique culture and environment, which the griffirca do appreciate.

Legend as it that deep within the mountain is the first forge used by scions long ago to help them to end the Never Ending Crisis. Any metal can be forged here into anything your heart desires. However, its been lost for centuries.

Human - They are sure inspiring people, but it's a wonder how they were able dominate the world even though they are physically weak. Can be arrogant and somewhat pessimistic though.   Wolvan - They could really revolutionize our industry. We should take some pointers from them or get an alliance.   Narigita - We understand why our ancestors hated them so much. At least their on the human's leash.

Dwarf - While we've been told about them, we have yet to make official contact. However, they don't sound very friendly.   Orc - Since Release, they have been a great ally in trading goods to us. We needed them desperately yet wanted very little.

Fexian - These natural magicians shouldn't be as respected like they are. We can cast powerful solar magics, but no one bats and eye.   Otterun - A people without a home? Truly sad, but they failed to stay strong. They're just bothersome and are just a footnote.   Melfloor - They are demons made by the Moon Goddess.

The Archives has setup a meeting with their royalty. We hope to get some more history about them and their island. So much of it is still unknown.
— Archivist Renna 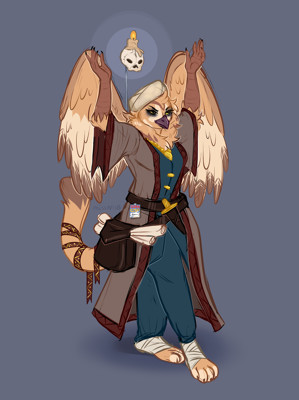 What is your social class number?

This is a detailed article!

Thanks! I'm really trying to flesh out all my races the best I can.